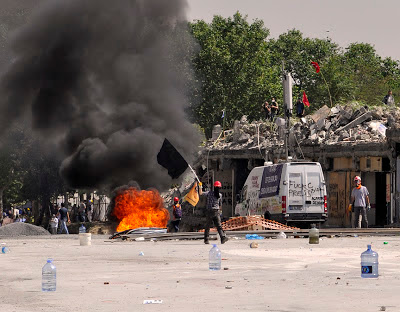 Entirely by chance Jenny and I were in Istanbul amid national convulsions that portended a possible Turkish revolution. The uprising began on May 28th when police used tear gas, pepper spray, and rubber bullets against protesters who’d gathered to halt government efforts to bulldoze Gezi Park near Taksim Square. The initial spasm of street battles left at least four dead and inspired a broader coalition of interest groups to resist Turkish Prime Minister Recep Tayyip Erdoğan’s increasingly authoritarian rule. By the time we arrived, demonstrations had spread across the country and Taksim had become people’s occupation park. Along with tents and barricades, protesters had set up their own food distribution network, a clinic, and even a children’s library. 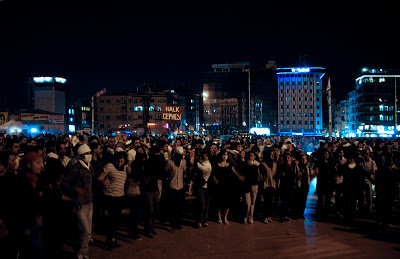 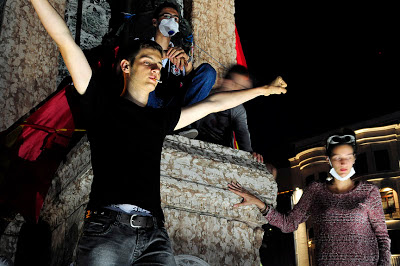 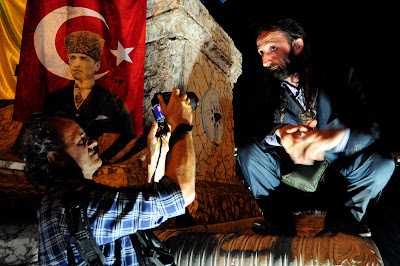 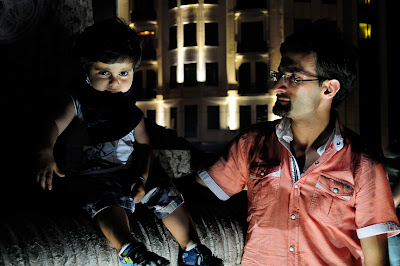 During our June 3rd visit, we joined the crowds who rallied underneath helicopter searchlights, and we got our first taste of Turkish tear gas. I remember the strange sight of one guy flipping the bird at a copter that wheeled overhead while kids hopped onto burned out cars to snap pictures for Facebook posterity. The night was tense. Two days later, however, a party atmosphere pervaded the place. 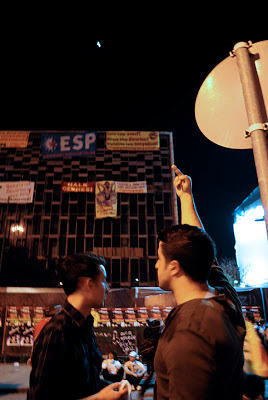 Local authorities had pledged not to use violence against the protesters, dancing and concerts had replaced chants and marches, and news reports indicated that the prime minister himself might be willing to negotiate with the opposition. Then in an early morning raid on June 11th, police smashed occupation barricades and began to pummel protesters anew with water cannons and tear gas grenades. Erdoğan had decided to retake the park by force. 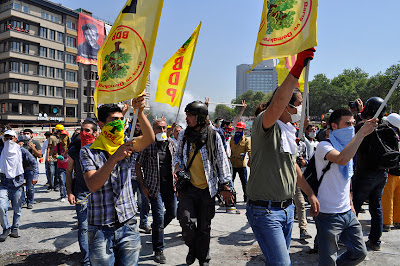 We were eating breakfast in our Sultanahmet district hotel when I noticed the televised images of smoke rising from Taksim. “Unbelievable,” I thought, “He’s actually trying to clear the park.” There were thousands of people filling that square. They were rowdy, boisterous, and defiant, but they weren’t threatening anyone. “Don’t go to Taksim,” a manager warned; she added euphemistically, “It’s too crowded.” Jenny agreed, recommending that we avoid pointlessly exposing ourselves to the violence. But I had to see things for myself. “I totally understand if you want to stay,” I said, “but I’ve got to get in there.” Jenny understands my Roy Neary quality and didn’t hesitate: “If you’re going, I’m going.” 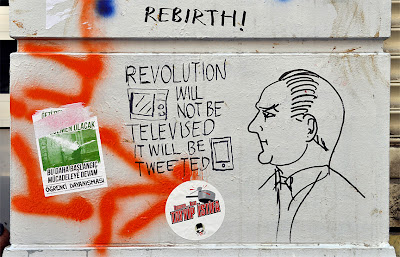 Getting to Taksim wouldn’t be easy. Metros were being rerouted and taxi drivers refused to take us. Our only option was a packed tram across the Golden Horn inlet, followed by a steep hike toward Galata Tower. Clomping up those steps we spotted layers of fresh street art, with fists and gas masks providing the common motif. On one wall someone announced, the “revolution will not be televised [-] it will be tweeted.” The cheerful exuberance of our first two visits had given way to a more dire feeling. There were no street performers on Istiklal Street this time, and no one was hawking any of those silly plastic Guy Fawkes disguises. Sidewalk dealers were only selling goggles and surgical masks. Ambulances and fire trucks screamed past, trucks bearing water cannons too. Dazed-looking protesters were walking toward us, silent and dripping with sweat. We had no idea what to expect. 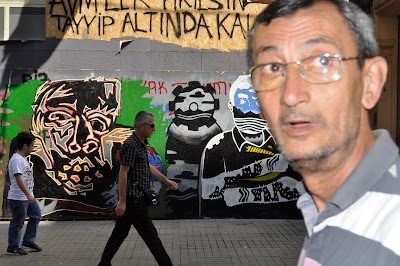 At last we arrived at the Ataturk memorial where just a few nights ago we’d joined throngs of cheering, gleeful occupiers. This time the square was littered with chunks of broken concrete and rivers of soapy water. Body armor-clad cops were mustering in front of us, facing two axes. One was relatively peaceful, the other more menacing. The main group of protesters occupied the high ground of Gezi Park, shouting and chanting but otherwise offering no threat. About a half-dozen kids on a nearby street to the left were taking more direct action, using slingshots to fire rocks at the police. The reply of gas canisters heaved grey streams of smoke back over the protesters’ makeshift barricades. 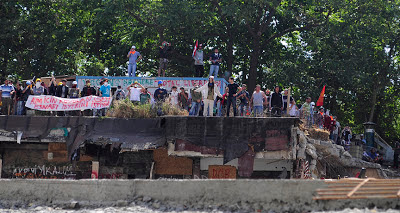 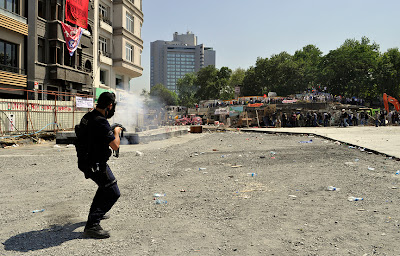 The lines seemed stable enough and I began to plot a course that would hug the apartment towers surrounding the square. “What about the police?” Jenny asked. “They won’t allow us to go in.” I figured she was right, but then I saw reporters and photographers planted throughout Taksim. Wherever I’d imagine some borderline for press activities, I’d then spot another civilian standing or crouching further off. The cops looked too busy to care. Jenny and I confirmed a rally point, and she reminded me to stay in sight. Knowing that she was hanging back to maintain a broader sense of the evolving situation, I made my way closer toward the rock-throwers’ barricade. 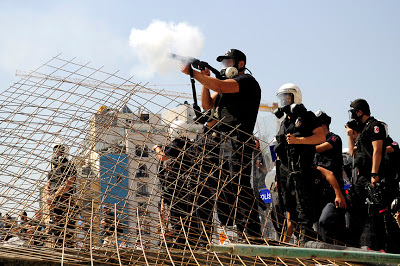 My first stop was a position near the police formation, shooting pictures of those tear gas canisters being launched. When one shell ejection banged into my leg, I realized I’d neglected to get decent cover, so I pocketed the spent canister and ducked behind some rubble. Even so I found myself facing the same rain of stones meant for the authorities. I picked up a piece of wood as a shield and started taking pictures. Now and again an officer would step forward to launch another grenade with a metallic thoonk, and the Gezi Park crowds would hurl boos in reply. Then came another assault, this time from above us. 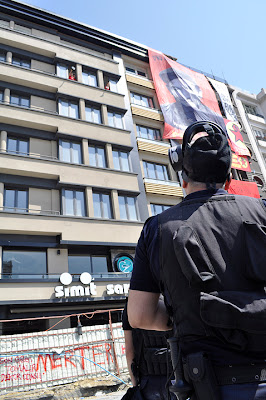 But when I looked up I only saw an old woman heaving water bottles from her apartment window, a couple exploding against the concrete. One officer swung his grenade launcher upward, and every one of us holding a camera turned toward him. Some folks were professional journalists; they were the ones wearing military surplus gas masks or football helmets festooned with stickers. Most of the civilians however were quasi-professional at best. A few were tourists like me. Nonetheless we shared an unspoken determination that anyone willing to fire a gas canister at an old woman tossing stuff from her window deserved full documentation for his actions. The officer paused and seemed adjust his aim. We all froze. He then lowered his weapon. A squad leader stepped up and began negotiating with the woman. She spat out an epithet and closed her window. 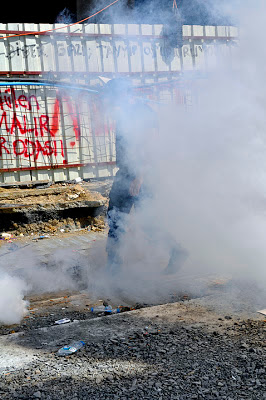 Right then a misfire sent a tear gas canister scuttling near my feet. My lungs filled with stinging paroxysm and my eyes felt like they were on fire. I wanted to rub out the pain, but I knew that doing so would only make it worse. Ducking my head inside my shirt, I bumbled toward Jenny’s direction and tried to control my breathing, cursing my decision to bypass those masks and goggles. I peeked out from my shirt and saw that Jenny too had taken a dose. We shouted toward each other, confirming that neither was hurt. I then ran past the barricade to get closer to the protesters. 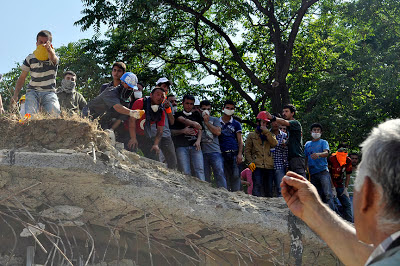 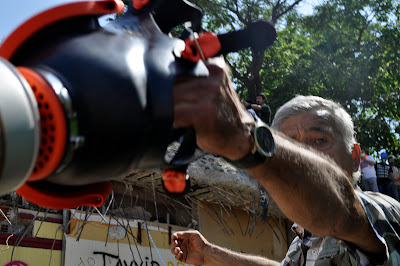 Viewing the scene through my camera, I concentrated on angles and composition. Only gradually I became aware that a small group of protesters had ceased shouting at the police and was now concentrating their anger on me. A small stone whizzed past my ear. A silver-haired fellow then stepped up, waving a gas mask in my direction and shouting at the crowd. He turned toward me and said, “They think you’re Turkish press. They’re angry with them right now. You better leave.” I needed no convincing. I thanked him and ran back toward the barricade. 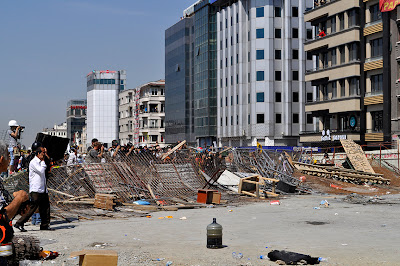 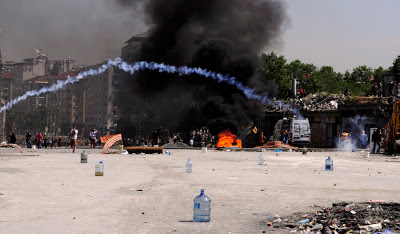 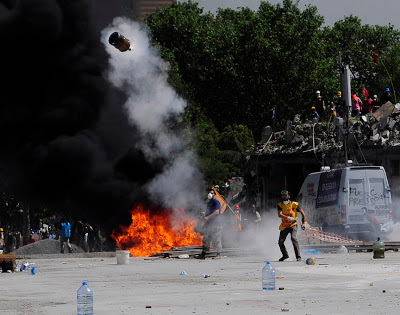 I joined about a half-dozen other photographers clustered behind strands of rebar. From behind us smoke trails arched overhead and rocks spun from the opposite direction. I leaned over a sheet of steel and poked my camera through the barrier, craning my neck to see the viewfinder. I felt a little silly about this pose until I noticed another guy leaning near me doing the same thing. We grinned at each other and went back to work. Alternating between my video and still camera, I snapped pictures until seeing a “lens unattached” warning on my Nikon. I remembered feeling a small impact and wondered if I’d just trashed my camera. It only took a quick twist of the lens though to snap everything back into place. 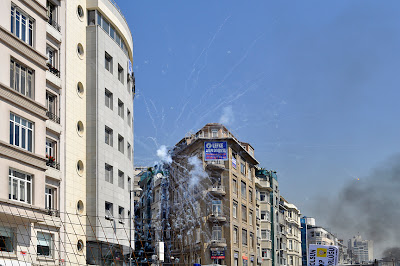 By this point the protesters were gaining confidence, advancing toward the barricade. They hurled their rocks and one even launched some sort of water bottle explosive. Then to the shouts and cheers of the Gezi Park crowd someone began to set off fireworks. Tiny explosions crackled above us, shooting off bright sparks that bounced against the buildings. The smell of gas had died down, but I had to know that Jenny was OK. Running back to the police position, I scanned the square until I found her. She was maybe 20 yards off, standing behind the columns of officers and giving me a bemused look that conveyed, “You are such an idiot.” I smiled and motioned that I’d rejoin her soon. 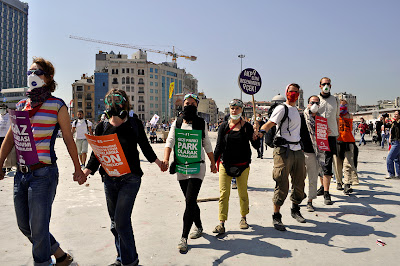 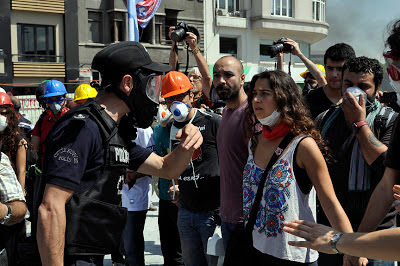 At that moment a long line of protesters appeared seemingly out of nowhere, encircling us. “Where the hell did they come from,” I wondered. Surely the police felt that way too. A few began fingering their weapons, but no one was itching for close-quarters confrontation. The protesters cinched closer to our group and representatives stepped forward. An officer and an occupation leader appeared to be negotiating. The mood was strangely calm as police lowered their weapons. The protesters opened their circle and the police pulled back. The park erupted with cheers. Even so something felt wrong, especially when reporters started to run toward the edge of the park. 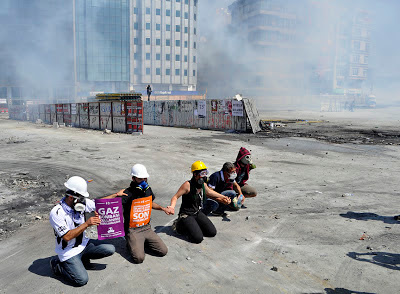 The police had summoned a water truck to disperse the protestors. Jenny had wisely made her way toward the entrance near the Ataturk statue; I began planning my exit too. The hose began to spray with enough intensity to throw people off their feet, and it was making a methodical turn in my direction. I got some distance and then circled back to the police position. That’s when I saw five protesters holding hands and kneeling together in front of the truck. The burst intensified until four broke ranks. One remained, gesturing with his arms wide. I don’t speak Turkish, but I imagine him asking, “How could you do this? You should be standing with us.” Most of the police were young, no older than the kids they faced. Most would have preferred responding to the Taksim protesters in some other way; I’m sure of it. 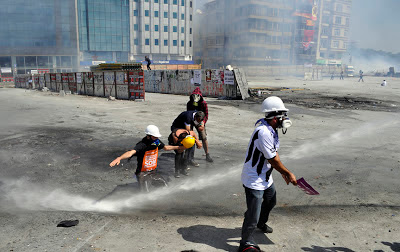 Once more my lungs convulsed with pain, another round of tear gas and pepper spray. I took short breaths, blew snot out of my nose, and tried not to rub my eyes. Jenny had mostly avoided this dose and frankly didn’t mind that I was getting some righteous rebuke for dragging us into this maelstrom. By now Taksim Square was largely emptied. The Gezi Park occupiers were standing their ground, but they knew the police would come for them soon as well. Plumes of black smoke ascended over the city as we started our long walk back. 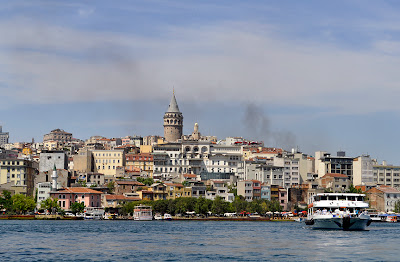 That afternoon we found ourselves in the same chairs where we first saw the police action on television. Now the local news showed Prime Minister Erdoğan speaking to parliament, blaming the protests on outside agitators and terrorists. His supporters clapped and cheered; there was no split-screen to tell another story. The hotel manager who had earlier warned us not to enter Taksim studied us for a bit, marveling at Jenny’s efforts to translate Erdoğan’s words from the television screen excerpts. She explaining some phrases and then proposed that she might be able to find some news in English. For a while she flipped through channels, offering an occasional “phfft” when Erdoğan would appear again. Then, without a word, she switched the TV off.

Note: I've posted more images on a Facebook album.
Email ThisBlogThis!Share to TwitterShare to FacebookShare to Pinterest
Posted by highway163 at 11:30 AM