Readers of this blog may recognize my interest in Car Guys, those iconic figures from the roadside that seem drawn by the same artist. I call them "Car Guys" because I've first seen these figures - notable for their thick exterior lines, their impersonal expressions, and their rugged no-nonsense attitudes - on signage for car-related businesses: garages, repair shops, and the like. Here's one I found in Lebanon, MO, a Car Guy who works for Don's Auto Glass: 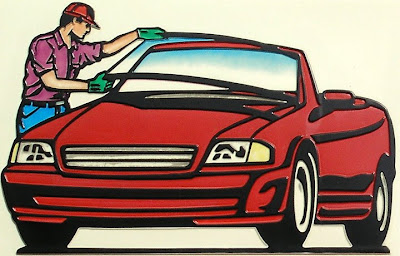 However, in that same city, I came across a Car Guy (or at least a relative) who does not work in the auto industry. Apparently this guy dreamed of the Old West and found a job selling western goods. I'll still call him a "Car Guy" because of his resemblance to his cousins. But clearly it's time for me to expand the term a bit. 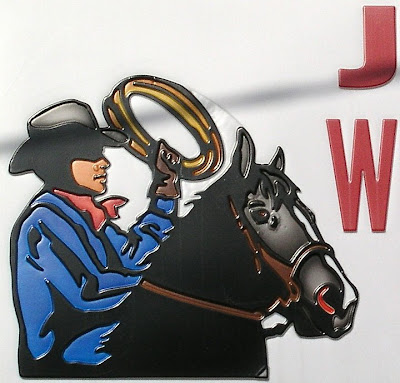 Later in my Route 66 trip I met more traditional Car Guys, those dudes who understand the innards of a new-fangled import. Though they prefer pre-seventies American cars, Car Guys understand more than most the exigencies of globalization, and as long as they can keep a steady paycheck, they're happy to learn new things. This one works for Maxwell Automotive Services in Carthage, MO. 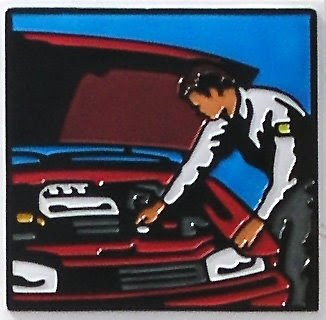 The traditional Car Guy is physically strong. He inspects and observes, of course, but he's ready to lift heavy objects so you don't have to. This Guy, working at Jay's Precision Alignment in Elk City, OK, illustrates the working ethos of his kin. 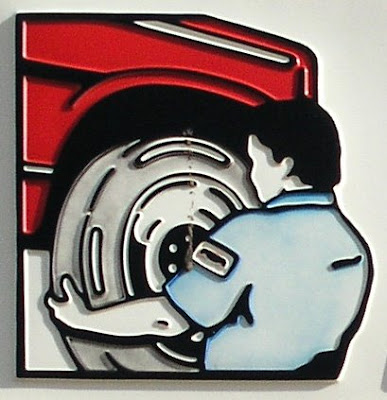 Finally in Grants, NM, I realized that not all "Car Guys" are men. Spotting a downtown laundromat, I noticed the same thick lines, the same all-business look, the same clear, irony-free life. This "Car Guy" is a woman who knows a thing or two about hard work. Oh, and look in the background. You'll spot a friend. Do they go out after work? 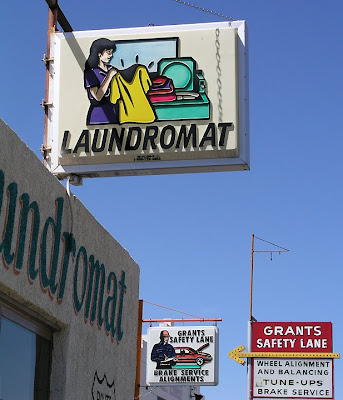 (Photographs by Andrew Wood)
Email ThisBlogThis!Share to TwitterShare to FacebookShare to Pinterest
Posted by highway163 at 7:35 AM

Certainly glad you enjoy the Car Guys... they are all over the country.

Thanks for the complements.

I have hundreds of Car Guys and Car Women, Car Cats and Car Dogs too...

Certainly appreciate the time you spent to take notice, recognize the "family", interrupting your travels dedicating the time to stop, U-Turn a few times and take such good pictures in order to immortalize our icons...

May the wind be at your back, the sun stay out of your eyes and your gas tank remain ever full!

I'm off to a meeting right now but in the next weeks if you'd like, I'll add more of the family.

Oh, you've definitely got my attention!

And thanks for your kind email.