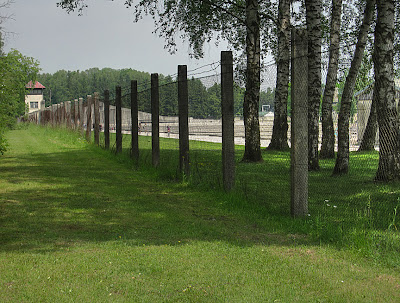 Riding by bus northwest to Dachau we chat and pick through bag lunches. Many of us are nervous, unsure of what to expect at a concentration camp. This visit is part of Salzburg Seminar's International Studies Program. Our group - about 60 folks in all - is here to learn many things, ostensibly about the power of collective action on a global scale to help ameliorate human suffering. Still we generally have no clue what will happen in the next few hours. We exit the bus, passing houses built alongside the containing walls, and we collect our maps. We listen to voices from portable audio guides, but mostly we stare in silence. 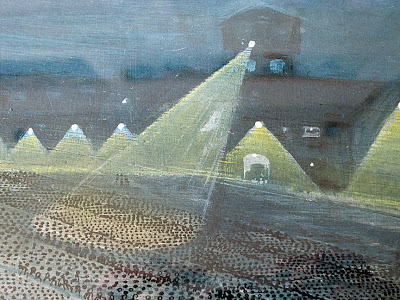 How does one convey the awful sublimity of a place like this, a precisely designed machine built to corral, torture, and ultimately kill human beings? There is a museum and a bookstore, of course, and there are religious memorials. There are artifacts and sculptures. There are two rebuilt barracks filled with tour groups. There is a painting by David Ludwig Bloch called Roll Call in the Dachau Concentration Camp, End of November 1938 that communicates a God's Eye view. There is a movie. There is a scale model.

Walking down the stony road past row after row of numbered depressions where dozens of barracks once stood, Jenny and I survey the hutches where human beings were forced to sleep in ragged piles. We eavesdrop as tour-group leaders relay their stories. We imagine this place, a grid of straight lines and geometric order, as the product of architectural rendering and bureaucratic efficiency. 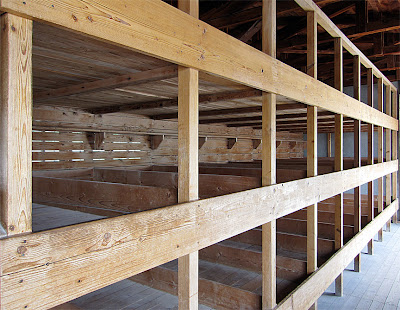 Eventually we follow the grim road to the crematoriums. I read that some people who were hanged inside these buildings could see the fires that awaited them. My camera documents these interiors, yet some photographs can only register the detachment of the tourist gaze. To post them, I fear, is to offer little more than souvenirs. 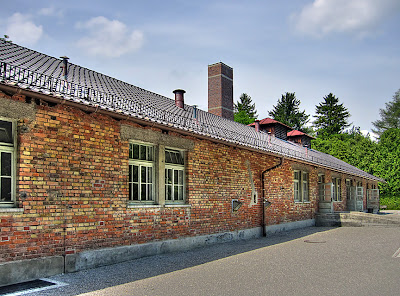 We walk the line that leads from collection to disrobing to showers. We've been told that few people were killed by poison gas at Dachau, that this place was the model for the extermination centers that would later be built further east. This place was an exemplar, a case study, a first draft for the Holocaust. Even so, thugs and functionaries of the Nazi regime murdered an estimated 35,000 prisoners in Dachau alone. Some died by disease, some through overwork, some by the bullet, and some by the boot. Jenny and I read names and see faces. Then we depart. Outside, rocky paths draw us into leafy green corridors that barely hide the pockmarked cement walls built for firing squads. The grass grows from layers of ash. The soil is deep black. 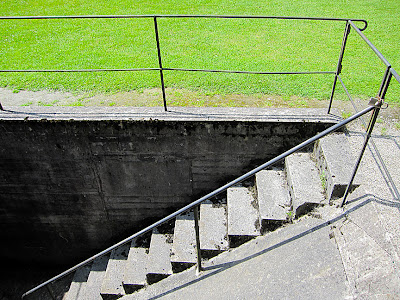 There is such dissonance here. The main road bounded by arrays of tall, swaying poplars. The guard towers seem to shrink in comparison. At the other end of that long walk, toward the right, away from the empty expanse where prisoners would stand for hours in the mute torture of roll call, the Jewish Memorial descends into the earth, symbolic death. We enter the dark interior in silence before being delivered into a column of light. Birds sing, and wisps, like cotton strands, drift in lazy circles against a blue sky. It has rained these past two days, but the sun now shines. Jenny weeps and we hold each other. 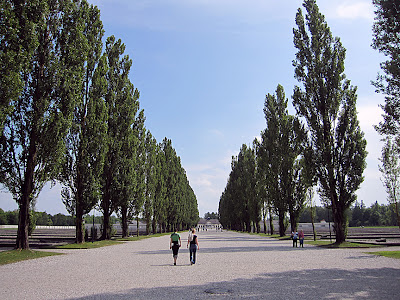 Onboard the bus once more, we talk all the way back to Salzburg. There is no formal commitment to dwell here or there. Yet each of us, it seems, find ourselves saying something such as, "like at Dachau," an immovable line beyond which things must not pass. Later we meet in small groups to share our reactions to the day: a formality, perhaps, but a necessary one. There is a performative quality to grief, just as there is a guilty aesthetic to photography. There is also ineffable truth. 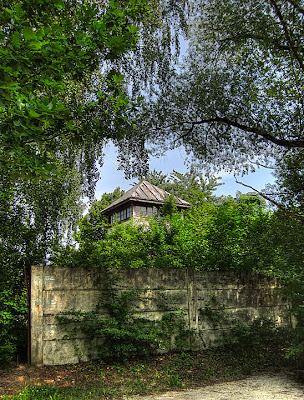 After dinner about 20 of us gather on the terrace by the lake. The moon is nearly full, floating amid silvery clouds. We chat for hours, our conversations knitting together and apart the gentle rhythm of a stroll. As folks depart in ones and twos, those who remain draw chairs together into an ever tightening embrace. It's almost midnight when Jenny and I say our goodbyes. Walking atop tiny stones to our room, I imagine that we've been whispering to each other in the darkness. Yet of course we talk (loudly, too; one must be honest), and we write, and we remember. How could we not? 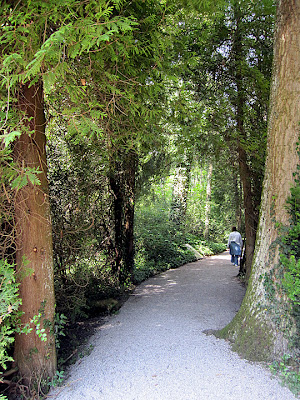