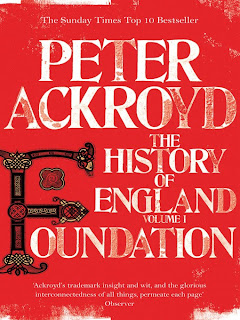 Description of the Saxons: "This band of warriors, under war chieftain, worshipped the sun and the moon. They adored Woden, god of war, and Thor, god of thunder. They practised human sacrifice. They drank from the skulls of their enemies. The fronts of their heads were shaved, the hair grown long at the back, so that their faces might seem larger in battle. 'The Saxon', a Roman chronicler of the fifth century wrote, 'surpasses all others in brutality. He attacks unforeseen, and when foreseen he slips away. If he pursues, he captures; if he flees, he escapes'." (p. 46)

Three English institutions: "The shire was originally a military district, but it also served royal purposes as a centre of taxation and a source of justice. Each shire had a court, and a burgh or major town; it could muster its own army, and was ruled on behalf of the king by a shire-reeve whose name became sheriff. The shire was then divided into 'hundreds'; each hundred was supposed in theory to support one hundred households or to supply one hundred fighting men in times of war. The hundreds were further subdivided into 'tithings' made up of ten households. The administration of the entire country could be devolved upon small groups of individuals who led the 'hue and cry' against thieves and who were responsible for each other's conduct. It was the essential basis of local government in England for at least the next thousand years." (pp. 71-72, emphasis in original)

English constancy: "There is no village still in existence (except for those formed during the Industrial Revolution) that was not established by the twelfth century. If you dig deep into the village soil, you will find its ancient roots. Some of them, not the majority, have been in existence for thousands of years. Bur they are absent from certain territories. Down the middle of England, from Northumberland to Wiltshire, numerous villages are to be found; beyond that great expanse, in the north and in the west, the Iron Age landscape of scattered farms and hamlets survived." (p. 73)

Centralization: "If there is one signal reminder of William's reign, it is that document originally called 'The King's Book' but more popularly known as Domesday Book because its evidence could no more be evaded than the day of doom. It was a survey of the resources of the realm, unique in Europe but not unusual in England where various national and regional accounts had already been compiled. According to the Anglo-Saxon Chronicle William had 'deep speech' with the men of his council and sent officials into every shire to find out 'what or how much each landholder had in land and livestock, and what it was worth'. The subsequent work was in fact so copious and so detailed, in single columns and double columns of Latin, that it must have made use of earlier records. It comprises two books, one of 475 pages and the other of 413 pages, with some of the capital letters touched with red ink. It describes over 13,000 locations, the vast majority of which survive still. The authors of the Chronicle state that there was not 'an ox nor a cow nor a pig that was overlooked and not included in the record'." (p. 104, emphasis in original)

Executions: "Sir Thomas Blount, was hanged at Smithfield for a minute or so before being cut down; he was then ordered to sit in front of a great fire while the executioner came to him with a razor in his hand. After begging the prisoner's pardon he knelt down, opened up his stomach with his razor, and took out the bowels. Blount was asked if he would like a drink. 'No,' he replied, 'for I do not know where I should put it.' The executioner tied the bowels with a string so that, in the words of a contemporary, 'the wind of the heart should not escape'; then he threw them into the fire. One of the bystanders shouted out in derision, 'Go seek a master that can save you'. Blount cried that 'I shall die in the service of my sovereign lord, the noble king Richard!' The executioner cut off his head." (pp. 309-310)

Town/Gown Struggles: "Violent struggles also rook place between the students and the townspeople. A skirmish at Swyndlestock Tavern, in the centre of Oxford, led to a bloody affray in 1354. The landlord's friends rang the bell of the church of St Martin, the signal to alert the people of the town. A crowd gathered and assaulted the scholars with various weapons, whereupon the chancellor of the university rang the rival bell of the university church of St Mary. The scholars, alerted, seized their bows and arrows; a pitched battle between the two factions lasted until night fell. On the following day the townspeople sent eighty armed men into the parish of St Giles, where many of the scholars lodged; they shot and killed some of them, when once again the university bell was rung and a large assembly of Oxford pupils set upon the townspeople with their bows and arrows. Bur they were outnumbered. 2,000 people of the town advanced behind a black flag, crying out 'Slay! Slay!' or 'Havoc! Havoc!' or 'Smite hard, give good knocks!' These were the war cries of the medieval period. A general carnage ensued, with many deaths. All the scholars of Oxford seem to have fled, leaving the university empty for a while." (p. 374)

The Nature of History: "Everything grows out of the soil of contingent circumstance. Convenience, rather than the shibboleth of progress or evolution, is the agent of change. Error and misjudgment therefore play a large part in what we are pleased to call the 'development' of institutions. A body of uses and misuses then takes on the carapace of custom and becomes part of a tradition. It should be noticed, in a similar spirt, that most of the battles fought in medieval England were covered by chance - a surprise charge, or a sudden storm, might decisively change the outcome. This should come as no surprise. Turmoil and accident and coincidence are the stuff of all human lives. They are also the abiding themes of fiction, of poetry and of drama." (pp. 442-443).

Simon Hattenstone's interview (The Guardian, August 10, 2003): "Close your eyes, I say, and think of something else that gives you pleasure. He closes his eyes. "Annotating my notes. It's the point where you amass all the references to one specific thing, so you'll have 50 books on, say, the stretch of road here and where it led. It's the point where it all comes alive." He's licking his lips and speaking faster. "That's when you discover revelations in the interpretation of all the evidence put together." He talks about the life of Shakespeare he's working on. "I have about 20 files, that big, and hundreds of books and I'll number the files and I'll give the books an alphabetic identification, A,B,C etc, then it will say 'John Shakespeare's will' A9, G14 etc. And that's the bit I like. It's like a new creation, a rabbit out of a hat, the creation of new knowledge."

Walter Olson's Sunday Book Review (New York Times, January 18, 2013): "Asked by an interviewer from the BBC what he found time to do aside from write his many books, Ackroyd replied, “I drink. . . . That’s about it.” To paraphrase Lincoln on General Grant, some other writers could use a barrel of whatever Ackroyd is drinking."
Email ThisBlogThis!Share to TwitterShare to FacebookShare to Pinterest
Posted by highway163 at 10:32 AM