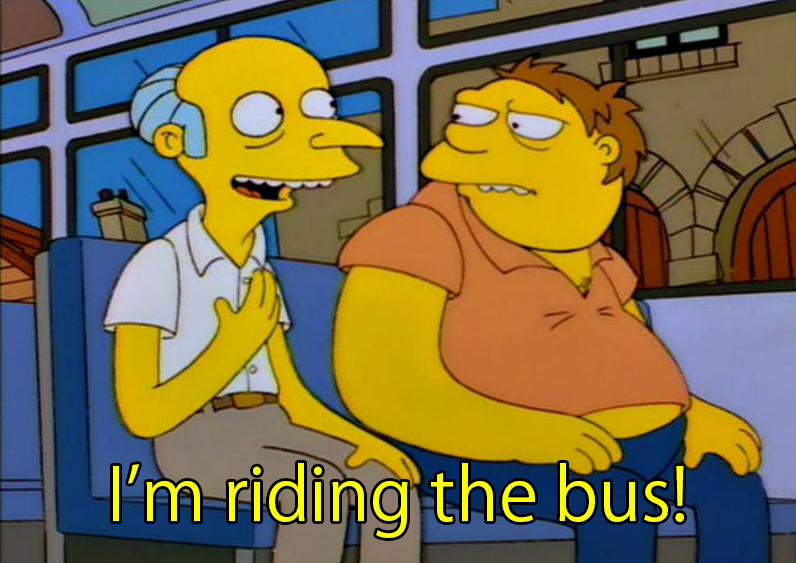 Remember the Simpsons episode when Mr. Burns lost all his money and was forced to fend for himself for the first time? Though he couldn't quite figure out the difference between condiments ("Ketchup ... Catsup. Ketchup ... Catsup. Cats... K... K... uh... I'm in way over my head!"), he just had to exclaim to nearby strangers:

Similarly, once Mr. Burns managed to understand the mysteries of mass transit, he announced his growing confidence to a new friend:

That's me these days. Sometimes when I'm shopping, I'll hear some toddler shrieking about something, and I'll think to myself, "Yeah, but at least he can shriek in Russian." All I can do is point and hope that someone will take pity on me.

First I found an app that provides real-time route-planning for buses and trams, so I can stop hiking so much and just get where I want to go (without being so metro-bound).

Better yet, I'm starting to recognize and pronounce names in Cyrillic.

It started last night when I was waiting for my pizza to arrive, and I noticed an interesting item on the menu: "тирамису."

"и…," I paused. The dreaded Reverse N. But I'd been working on that character earlier in the day, so I was able to figure it out. It sounds like "ee."

"а…" Another easy one. Just like "a" in English. [Well, that depends on the syllable-stress, but... OK, stick with the basics.]

There are five letters that are interchangeable between our languages, and I lucked out and got three of them in one word. "Tee-ra-m…"

I should be playing Wheel of Fortune!

"с…" That's a tricky one, but I remembered that "c" sounds like "s" in English. Makes sense, I guess.

"Tiramisu!" I announced to the restaurant.

Thank goodness for cognates. Now if only I actually liked the stuff.

Anyway, that was last night. Today, I went to Minsk's new Zamak shopping mall, practicing the bus system and double-checking the location of the nearby Expo building where I'll be presenting a talk next week. And I spotted a movie theater.

A few days ago, I went to another theater and discovered that you can't just "sound out" Cyrillic words as if they're English words. I stood there in front of the ticket-seller, flummoxed and embarrassed. The woman at the window pushed a list of movies in front of me and I pointed at one randomly.

That's how I ended up seeing an execrable bank robbery flick starring Hayden Christensen and Adrien Brody that had been dubbed into Russian (no subtitles, of course). Later that evening, IMDB revealed that I'd seen a 2014 direct-to-video-quality movie called American Heist.

Oh, and no, I don't recommend it, in any language.

Today, though, would be different. They're still playing The Imitation Game at the Zamak. I've seen it already, so I presume that I'll have a better chance of following the Russian version. But there was that poster... 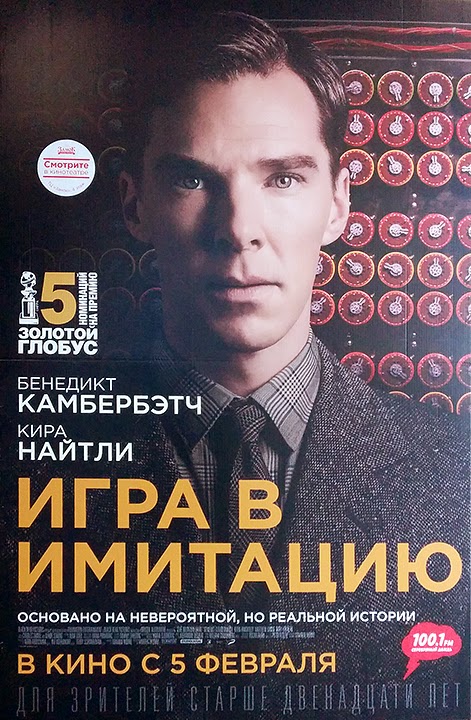 Once again, I heard Burns' voice: "I'm in way over my head!"

So I snapped a pic and moved off to a corner, sounding out the letters and feeling like a child.

Little by little I figured it out.

It didn't take long for "ИГРА" to become "egra." That word means nothing to me. Still, I had hope. If only…

I mean, sure, I would presume that it'd be the same name, just translated from English to Russian. But The Imitation Game in English hardly sounds like "eg-ra ee-mee-tadz-ee-u" in Russian. Hell, it sounds better in Russian!

I slapped down 60,000 Belarusian Rubles (a little less that four bucks for an evening show) and smiled.

Now I'm about to put on my warm clothes and catch the next bus heading northwest on Pobediteley Avenue. And as God is my witness, I'm seeing a decent movie tonight!
Email ThisBlogThis!Share to TwitterShare to FacebookShare to Pinterest
Posted by highway163 at 5:50 AM

Awesome!! Was Mr. Cumberbatch's performance just as good in Russian? ;)

That's great that it's all starting to come together for you! Do you aspire to one day read a book in Cyrillic?

Just got back. Actually I think that Cumberbatch's performance is even better in the original Russian. :-)

Not sure I can ever achieve a literature-reading quality of proficiency; I just want to read signs and understand what the heck is going on around here.

Latest fun: waiting for the movie to start and spotting a poster for the film фокус.

That first one is goofy, which makes it easy to remember: "F"

What the hell is "FOKOOS"?

Great post! It is so fascinating to start to read a tiny bit of Russian from what I remember in St. Petersburg. It would be really fun to be there long enough to get good at it. Keep up the good work!!

Hi Andy - a great post. This is exactly how we felt in Italy last year. After 6 weeks of Italian classes, we basically walked around speaking workbook phrases such as "prendiamo il treno!" ("we are taking the train!"). Needless to say, even our enthusiasm wasn't enough to impress anyone within earshot with our basic Italian. The blog is wonderful, it's great to be able to share your experiences.

These days I get plenty of funny looks from folks who see me taking pictures of signs on doors, posters, and buildings. I'm collecting words that vex me so I can study them later.

I can't wait to show you my Russian alphabet app. It features a stern taskmaster who marches letter to letter. Only once I get through the full list does she change them up. The app is for children, but that's pretty much where I am these days. :-)