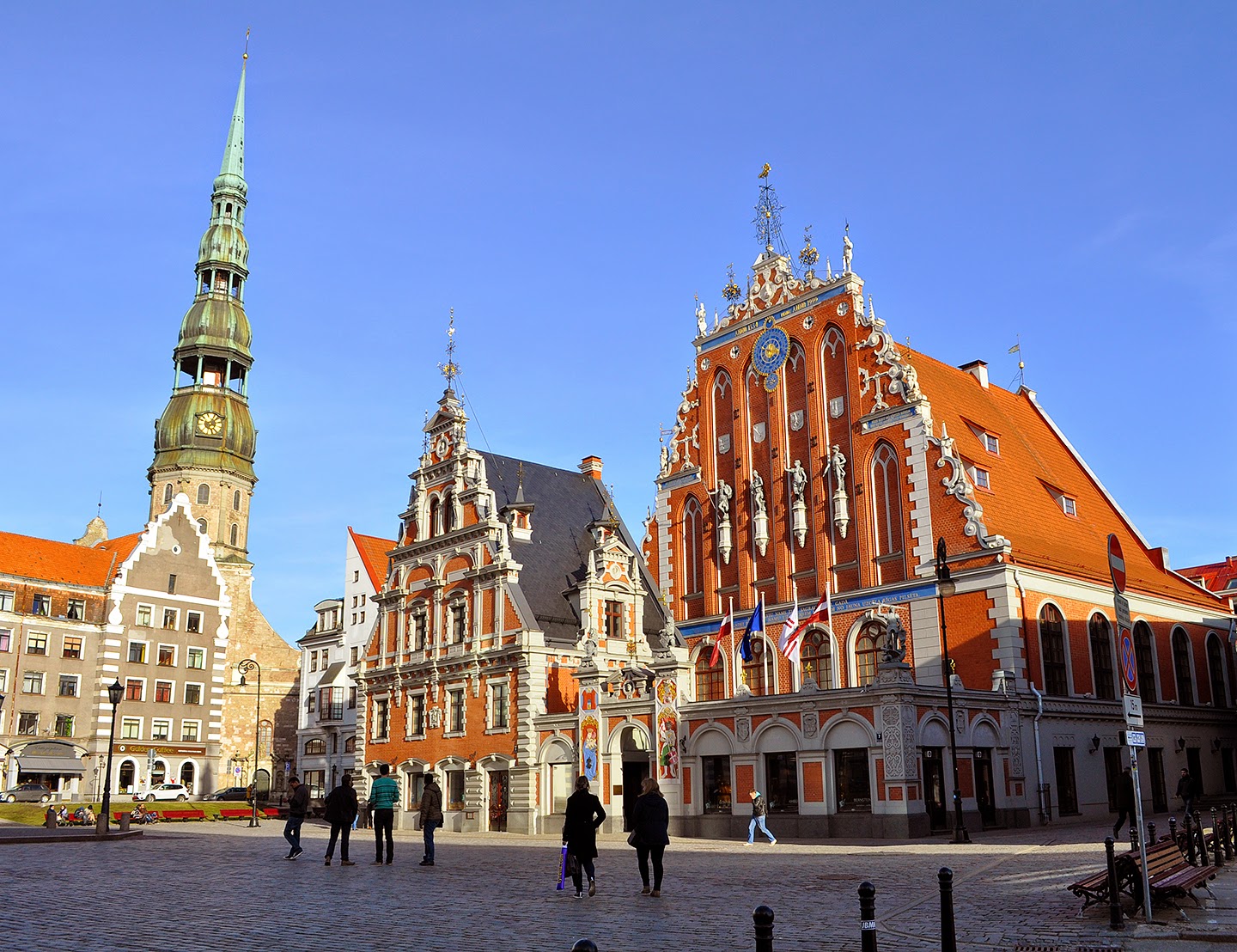 I took a trip to the Latvian capital of Riga this weekend, enjoying its old town collection of meandering cobblestone passages, drunken revelers on "beer bikes," and a nearly ubiquitous appearance of pooping cats. I'll explain that last part later. I'll begin with my wandering the town in search of the iconic House of the Blackheads, the guild landmark which had been obliterated during the Second World War but rebuilt in the late 90s. Ever impatient, I gave my map only a brief glance and wandered the historic city center, struggling to differentiate spires and discern some sense of orientation. 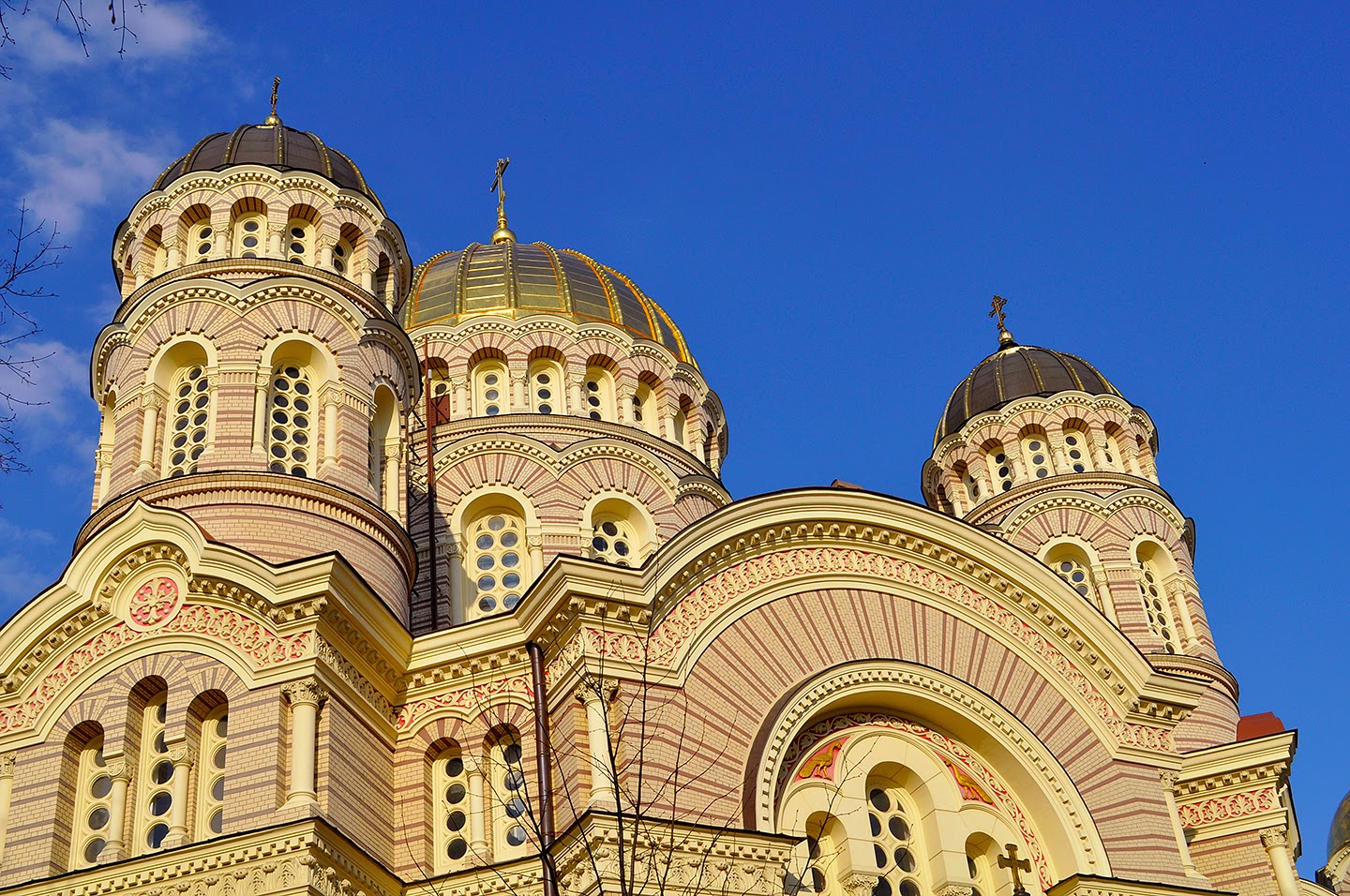 Eventually I came to love the bridges of the Daugava River because of their utility as guideposts. "OK, the fancy cable bridge (the Vanšu) is that way, and the iron railway bridge is that way. And if I'm facing water, the old town is that way. It's silly, I know, but sometimes navigation just comes down to the basics. Gradually I gained some more confidence and began to dispense with the map - yes, after asking a cop at one point "just where the hell am I?" Before long I realized that the rebuilt Blackheads guild house is just around the corner from my hotel. All the same, getting lost in Latvia is still mighty fun. 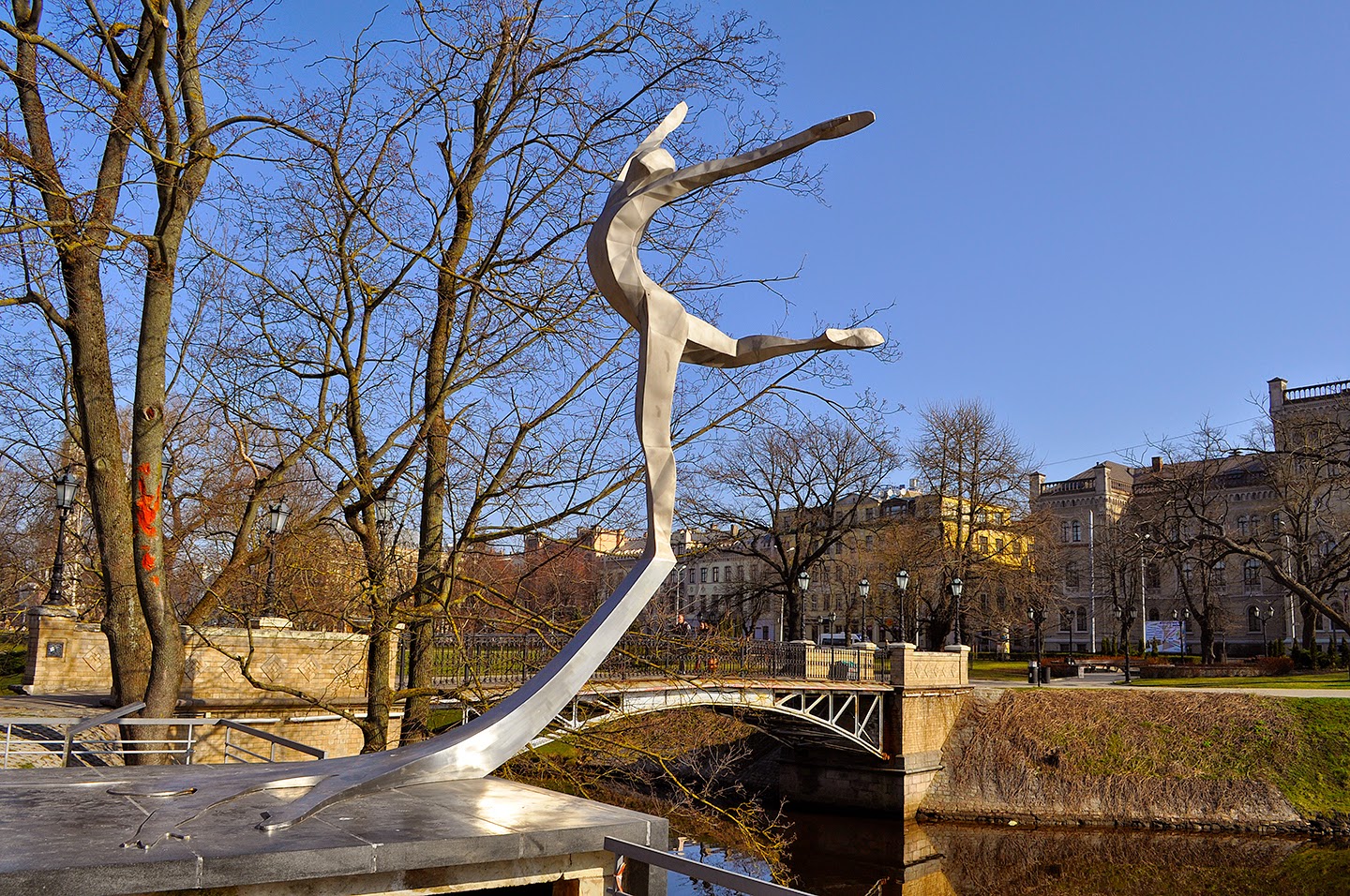 Riga's old town is remarkable for reconstructing its medieval past. You'll find almost no Soviet-era iconography; that stuff was largely stripped after the nation's 1991 independence. Instead, the city center is, in large part, a recreation of Riga's medieval past. Here I'll forgo theoretical questions about authenticity and simply confirm that I abandoned any hopes of seeing the "real" old town, especially when I glimpsed one medieval-themed restaurant (The Key of Riga), complete with costumed servers, paying homage not to the city's actual past but rather to a 1970 movie called Vella kalpi that the city's excellent In Your Pocket guide describes as "part Three Musketeers and part Three Stooges." 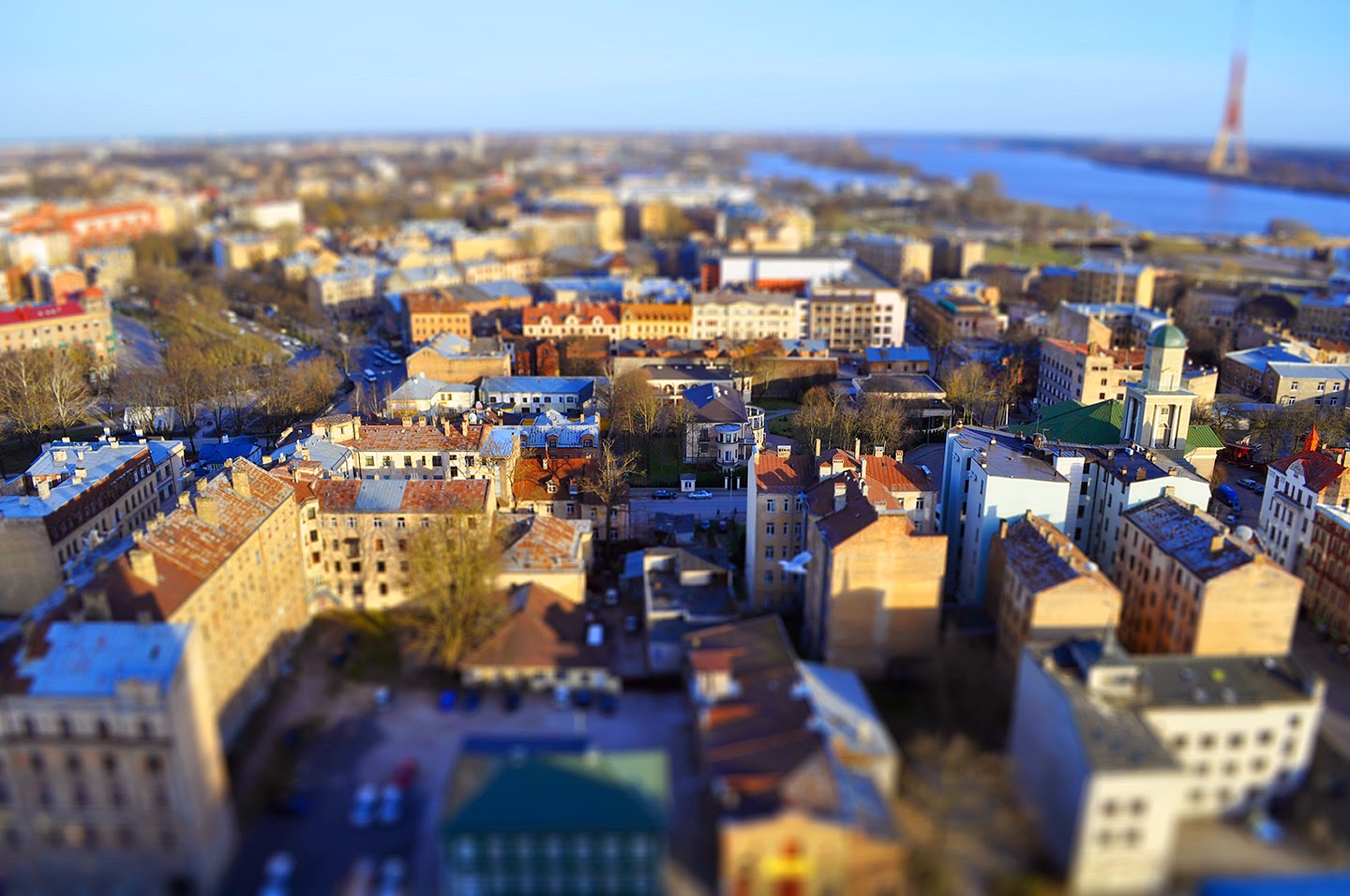 All afternoon I traipsed the cobblestone paths, winding my way around town. Eventually, though, I headed for the city's funkier environs near the Art Deco central market whose five pavilions once served as Zeppelin hangers. Further away from the river, I visited the Latvian Academy of Sciences building, one of the few obvious relics of Soviet-style monumental design, and took in a panoramic view of the city. Back near my hotel, I spotted a group of tourists descending the stairs into a dimly-lit building and figured I might as well join them. 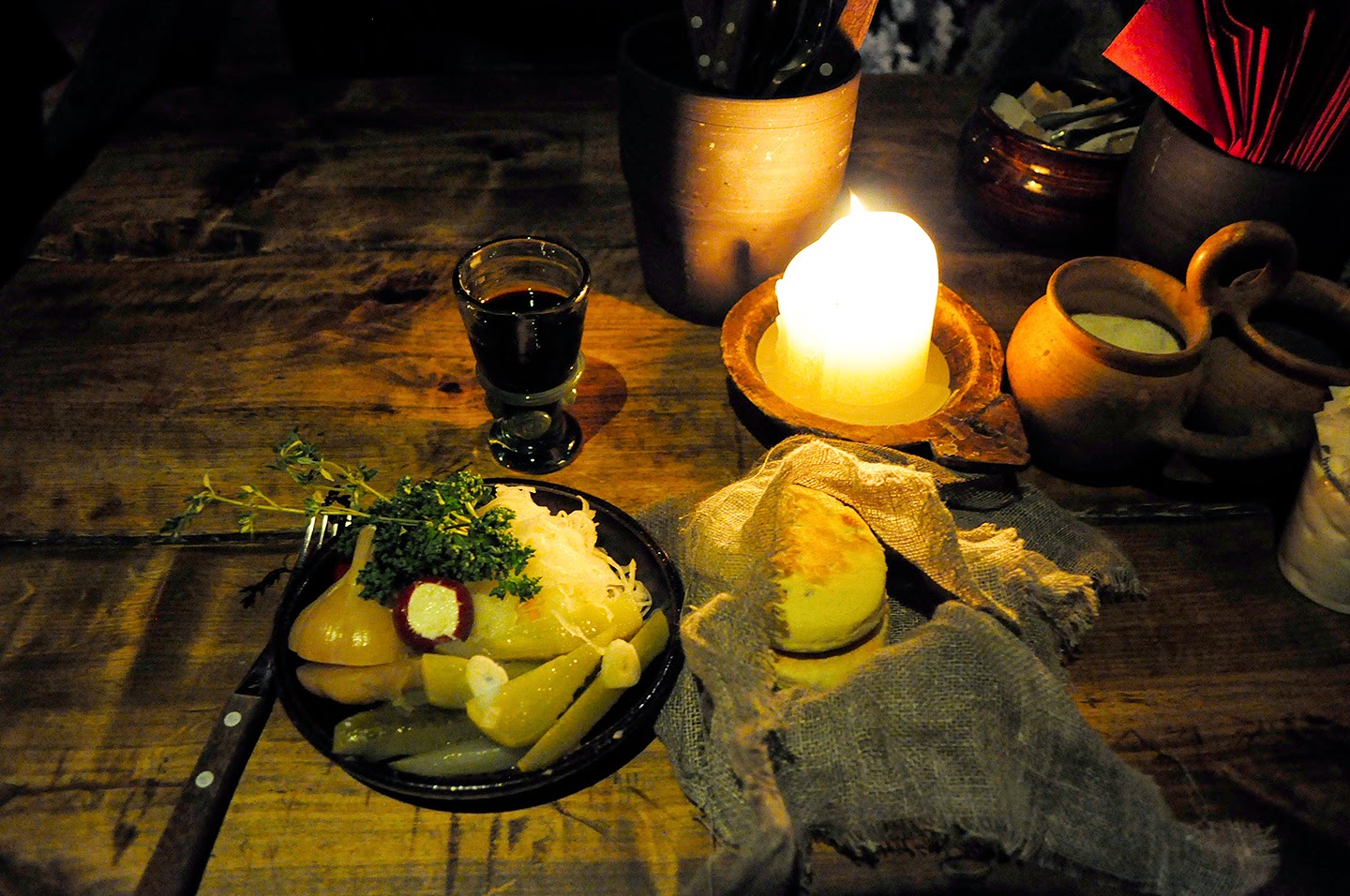 Turns out they were entering Rozengrāls, a cavernous medieval-themed joint lit only by candles and adorned with wandering musicians. I ordered a plate of pickles, full garlic cloves, and shredded cabbage, accompanied by bread served in a sort of cheese cloth. And I treated myself to Riga Black Balsam, a potent herbal liqueur that, according to one TripAdvisor commentator, may have been "created solely as a way to torment the various foreign armies and tourists who have invaded the country over the centuries." 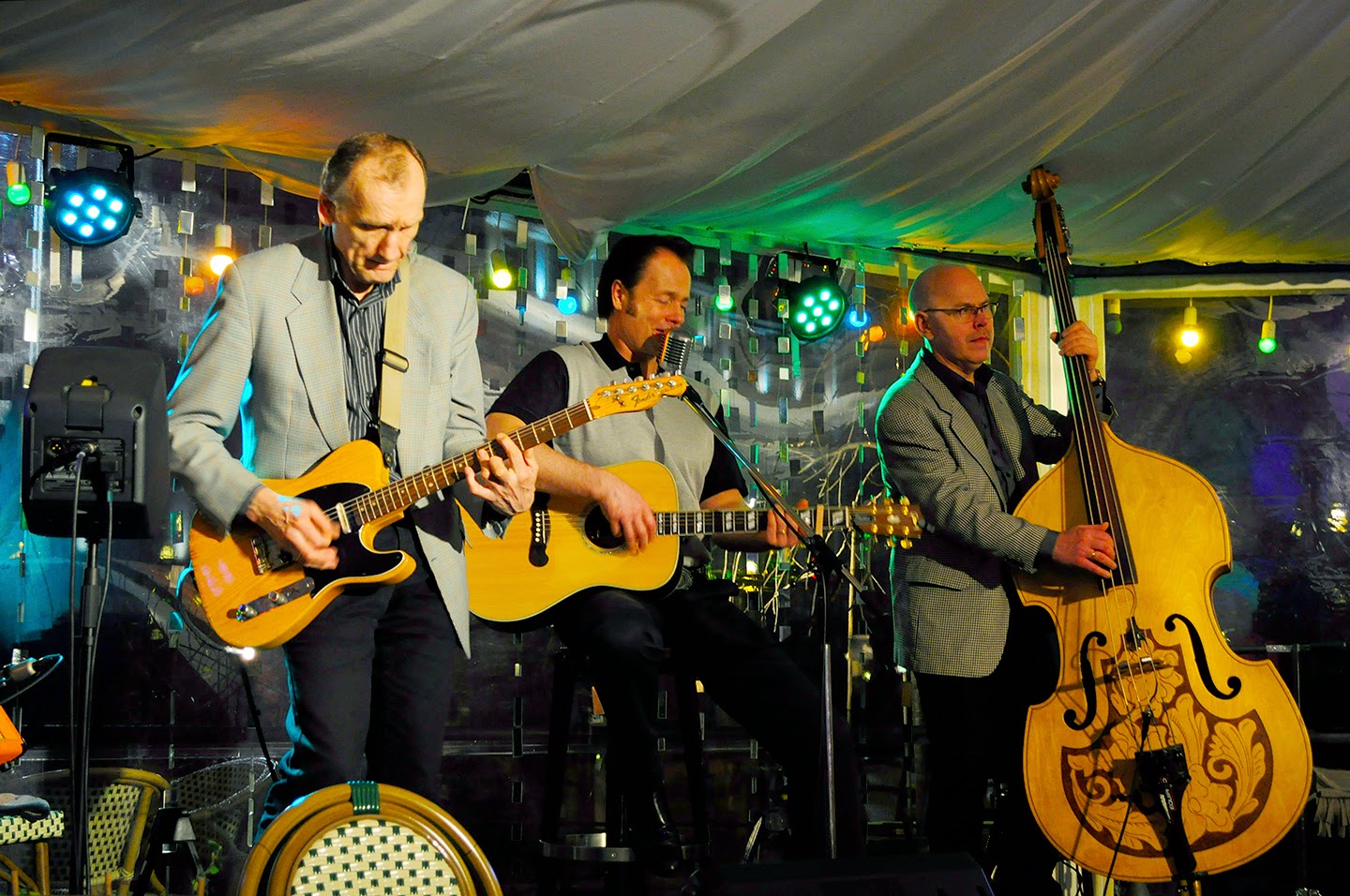 Later that evening I drifted into a beer garden when I heard a rockabilly band crooning a pretty solid version of "Route 66" (despite getting a few of the cities wrong). Standing outside, I sang the song out loud to myself before stepping into the seating area. Other patrons were focusing on their own conversations, so sometimes I was the only person clapping for these dudes who belted out some swell renditions of Elvis and Johnny Cash. 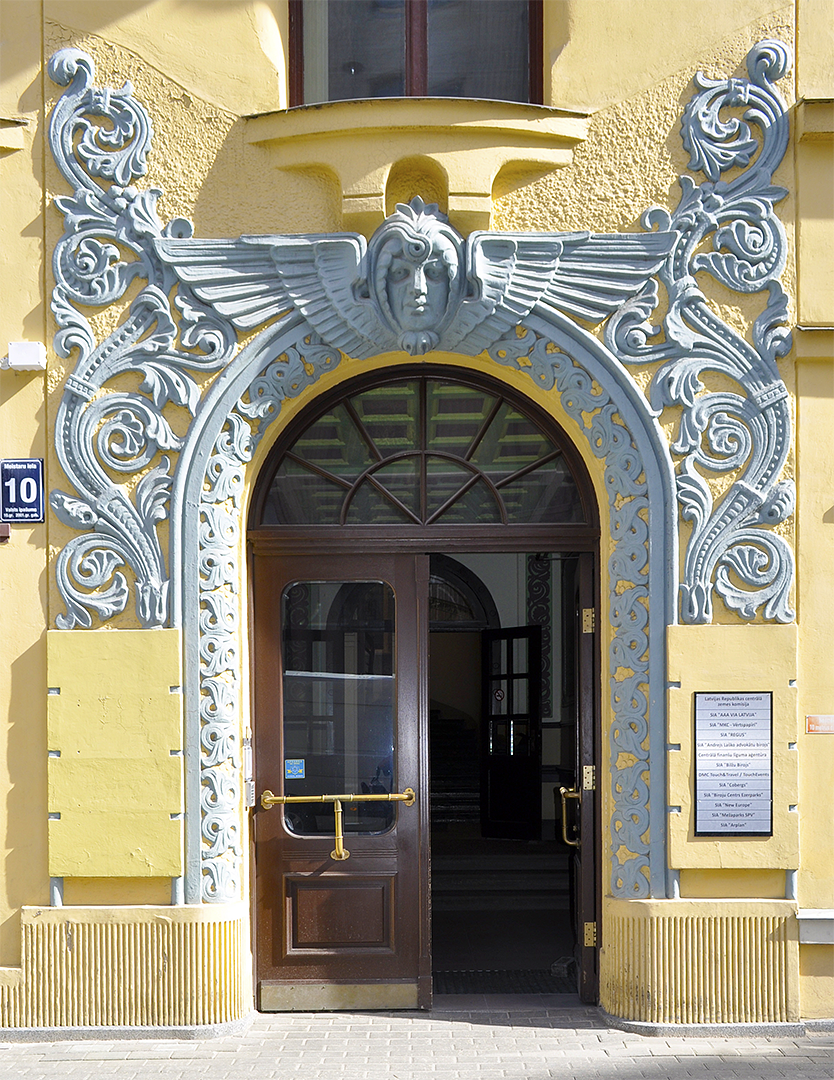 The next day was focused mainly on exploring the city's Art Nouveau district. I must admit that I've never been much of a fan of that style; the Fin de siècle clash of natural and mechanistic motifs strikes me as being overly fussy. I'm more a streamlined moderne fellow. But searching for sun-drenched facades in Riga, losing myself in all of that gaudy detail, I came to appreciate the style's complex artistry. 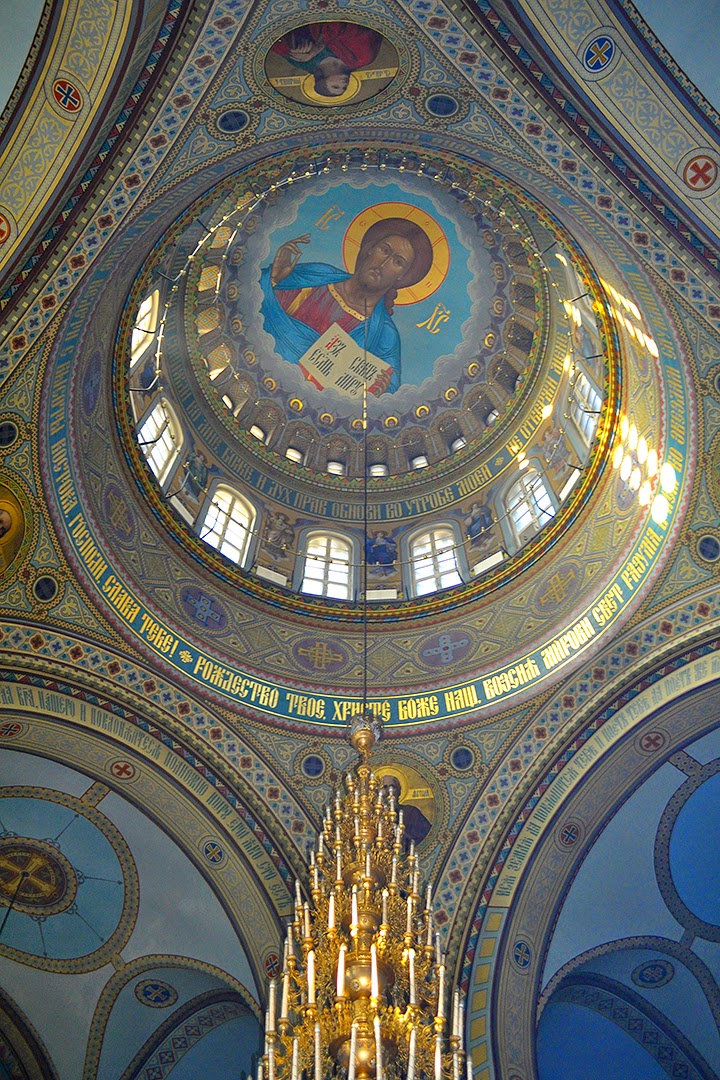 I also found myself returning several times to the Nativity of Christ cathedral, hoping to photograph some of the interior. I'd never dream of shooting pics during a service; then I'd just stand quietly with the other partitioners, enjoying the music and the wafting of incense. On my final visit, though, the congregation was departing. I spotted a nun with twinkling eyes: "нет flash," I promised. She offered a silent assent - and wouldn't you know it? The damned flash went off! "Oh my god," I stammered. "извините!" She glared for a half-second and then theatrically shook her fist in my face before admitting a big smile. All was forgiven. 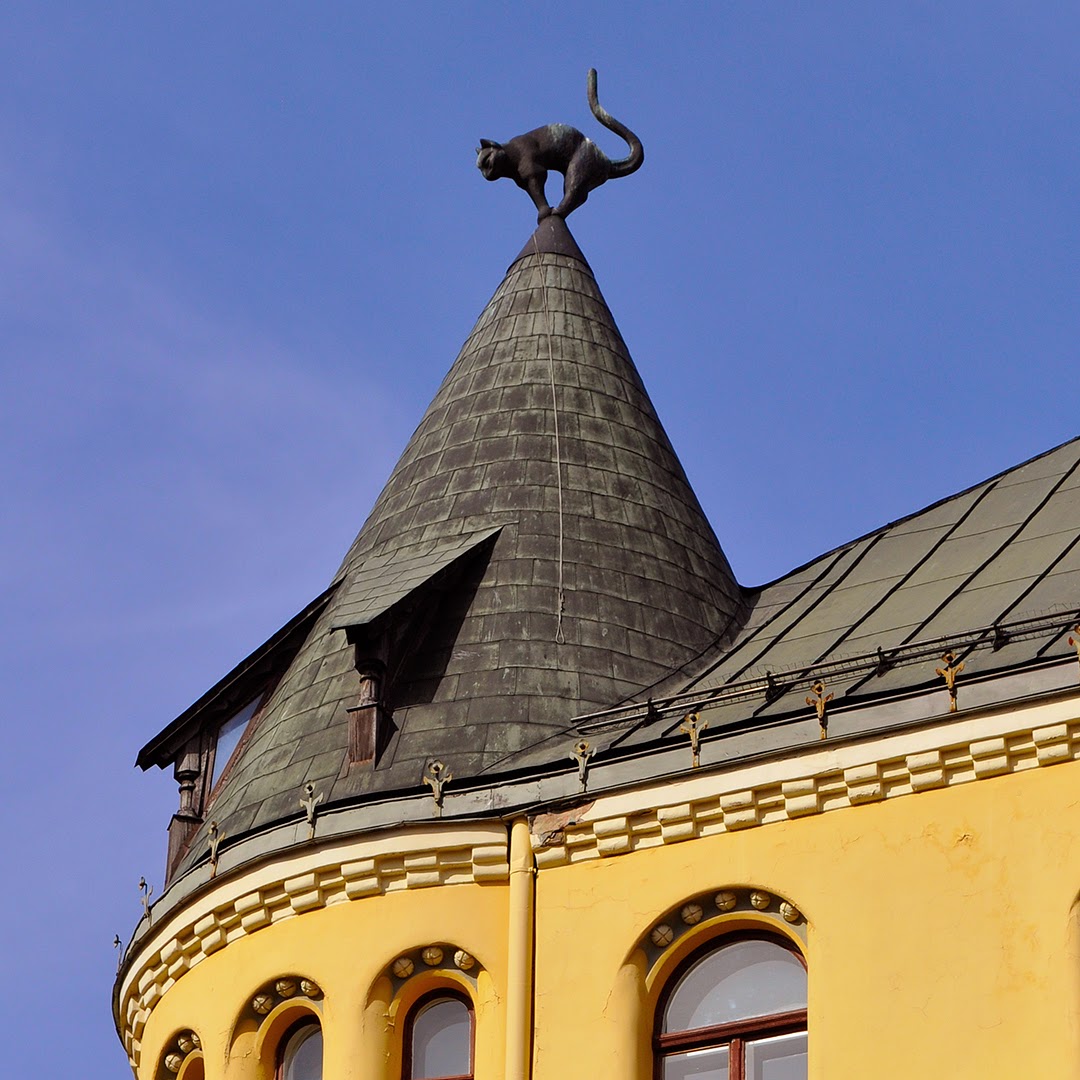 One final highlight of the visit was a couple trips to the Cat's House bar. That's where a waiter introduced me to smoking absinthe, a process where you coat the inside of a wine glass with some of the Green Fairy, light the outside, and inhale the steam through a straw. Afterward you mix the rest of the beverage with whatever you prefer; this guy recommended orange juice. Outside of the bar I looked up to see one of those squatting black cats for which the town is well known. You see 'em on postcards and magnets and other trinkets. I asked a woman selling souvenirs for some background, and she told me the story of a merchant who sought entry into one of the city's guilds and was denied. Incensed, the tradesman placed two cat sculptures atop a building he'd commissioned, ensuring that their arched backs resembled two felines crapping on the guild hall. The gesture was so offensive that they took him to court. The opposing sides settled only when the guild promised to admit the merchant to their club (and once he turned the cats around). Is the story true, or was it concocted as more touristic falderal? I wouldn't hazard a guess. But as I boarded the flight back to Minsk, I determined to return to Riga one day - if only to share this city with my love and fellow cat fancier Jenny. 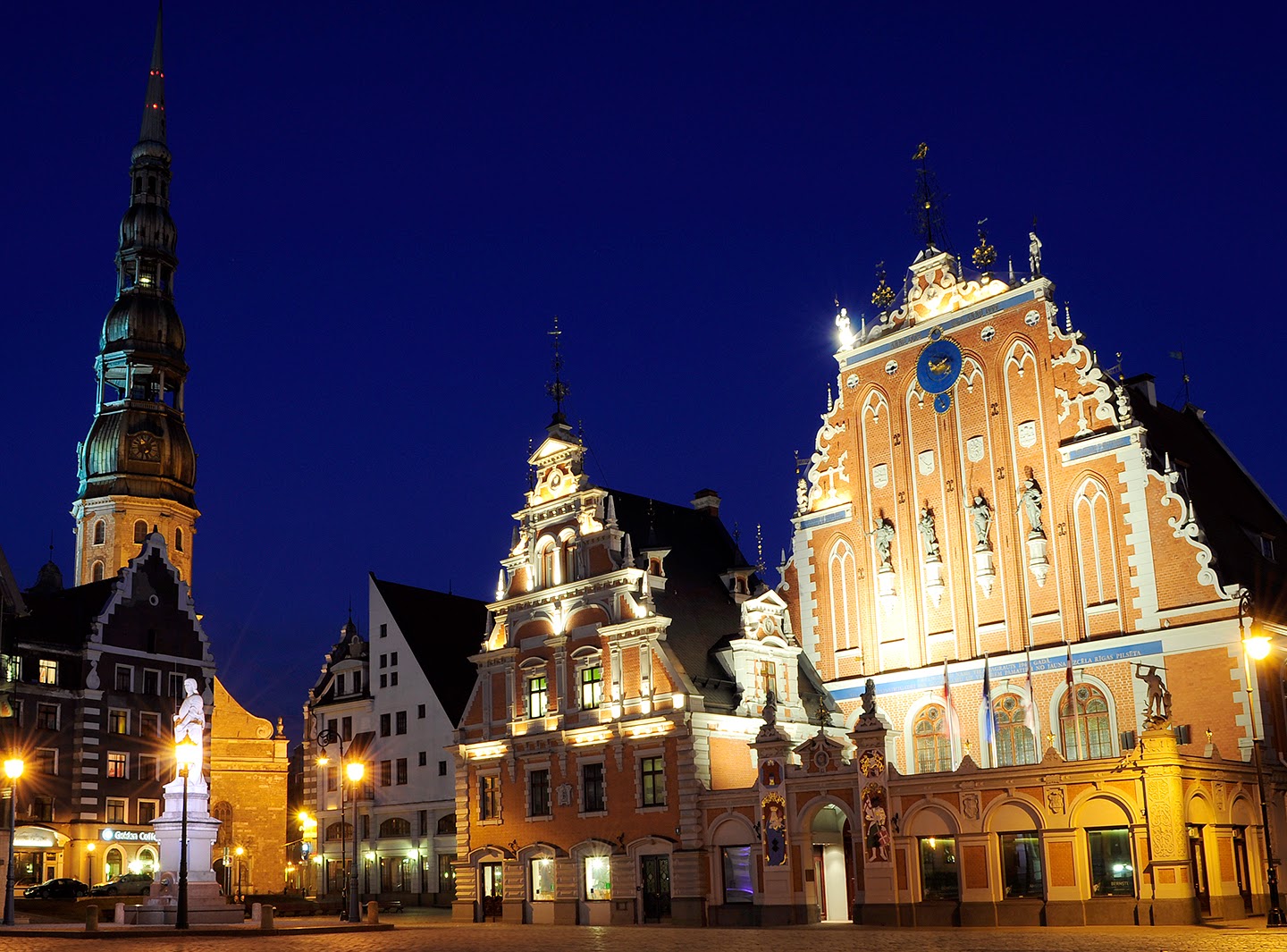 Email ThisBlogThis!Share to TwitterShare to FacebookShare to Pinterest
Posted by highway163 at 9:29 AM

Great post! I love reading about this city I've never heard of before. It seems like it has a lot of character and charm! I'd love to go there with you someday.

I continue to appreciate your road trip commentary on another continent. I'm amazed at the global popularity of Route 66!