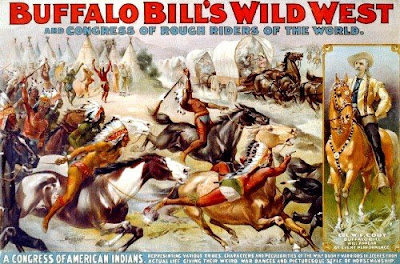 Rosemarie K. Bank's essay "Representing History: Performing the Columbian Exposition" provides a number of insights for students of Rhetoric and Public Life, particularly with her focus on the expo's construction of "The Other." In a broader sense, Bank does a solid job of weaving in a perspective relatively new to my home department of communication studies (but admirably enhanced by Matthew Spangler's many contributions to our community): the perspective of performance in the articulation of public life.

Bank focuses on the 1893 Columbian Exposition (the so-called "White City"), attending closely to Frederick Jackson Turner's use of that moment to introduce his "frontier thesis." She also explores Buffalo Bill's Wild West exhibit, an event that did much to crystallize a compelling narrative of how the West was "tamed."

Initial highlights of Bank's piece include her reference to simulacra and her use of Michel Foucault to identify strategies in which discursive practices contain overlapping performances and narratives (rather than merely one that dominates and one that is dominated). While Bank's piece focuses on representations of American Indians at the 1893 Columbian Exposition, she intends for her essay to reflect something of the experiences of many oppressed groups who found themselves positioned in various ways at the fair - and who are represented in contemporary settings that purport to be both touristic and educational.

Bank begins by observing how the White City phantasmagoria contained both utopian and dystopian images, each relying upon the other to come into being. To the author, this balancing of opposing images evokes Foucault's heterotopia: a counter-site whose tolerance for ambiguity enables the management of crisis or deviance [To learn more about heterotopia, I encourage you to read an online version of Jay Miskowiec's translation of Foucault's 1967 lecture on the topic]. In class, I often use examples of amusement parks and motels to illustrate omnitopia].

Thereafter, Bank outlines some of the 1893 fair's various ethnographic exhibits dedicated to highlighting both the identities and distinctions of various racial groups, a significant choice for an event seeking to define the expansion and barriers of civilization. One common theme of the various Native American exhibits, claims Bank, was a turn away from educational ambitions and toward the packaging and portrayal of more caricatured version of the past, often jumbling together historically incongruous styles and group relationships, particularly at the fair's Midway Plaisance.

Even so, Bank refutes charges made by more critical researchers (most notably Robert W. Rydell, whose works on the 1893 fair represent essential reading), that one may find a singular narrative of "cultural hegemony" in these sort of exhibits. She reminds us, "Performers complicate unitary readings and performance resists binary interpretations" (p. 598). [I would add that the notion that agency resides even within the most totatlizing environments animates much of my thinking about public life, as examined further in City Ubiquitous.]

From this analysis, Bank shifts to Frederick Jackson Turner's 1893 presentation of his paper, "The Significance of the Frontier in American History" [here's an online version of Turner's paper]. Once more, Bank employs Foucault's heterotopia to describe how Turner represented a shift from 18th century views of history-as-continuity to 19th century views of history-as-discontinuity. More intriguingly, Bank contrasts Turner's (nostalgic) frontier - a relatively peaceful and empty site where Europeans traded their urban ways for simpler, rougher, more human modes of life - with the Buffalo Bill Wild West show and its depiction of the frontier as a site of initial struggle and ultimate concord between Europeans and Native Americans.

Bank concludes her analysis by focusing on Buffalo Bill's show and its efforts to depict the "taming" of the frontier as both a struggle located in the past and as a collection of participants continuing into the present. Here Bank offers a response to the critics of these sorts of performance, noting that the Wild West show enabled more freedom and dignity for its Native participants than the presumably more sober and educational ethnographic exhibits offered by government and university sponsors.

Noting the presence of Native Americans in the show who, she claims, were able to perform their roles in a manner more closely aligned with their recollections and interests, Bank states, "This Wild West was a shared history and memory, a jointly occupied arena in which competing claims for authenticity could be presented and evaluated" (p. 605). In this argument, Bank reminds critical scholars to eschew their facile articulations of history, lest their efforts to uplift oppressed groups hold aloft merely their own idealized images.

Note: In summer 2004, I published an essay using Foucault's heterotopia to analyze the Woman's Building at the 1893 fair. I sent my essay off for review before I was able to read Bank's piece; otherwise, I would have happily cited her. If you'd like to see a PDF of my essay, "Managing the Lady Managers: The shaping of heterotopian spaces in the 1893 Chicago Exposition's Woman's Building," published in Southern Communication Journal, send an email to Andrew.Wood@sjsu.edu. Also, any difficulty finding Bank's essay? Let me know. I'm happy to help.

(Image from Legends of America)
Email ThisBlogThis!Share to TwitterShare to FacebookShare to Pinterest
Posted by highway163 at 11:52 AM