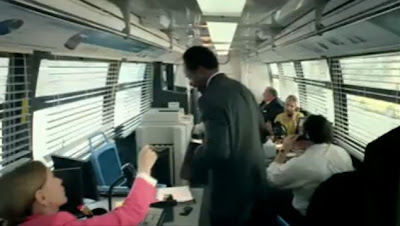 Check out this video: http://www.youtube.com/watch?v=S14UYqBZcug

One of the practice exercises I learned in grad school was to analyze media artifacts frame-by-frame, or at least shot-by-shot. Reflecting back on those fun days, I knew this commercial would make a swell site of analysis, especially since it so effectively illustrates the omnitopian components of conflation and mutation.

This Fall, I plan to present a paper about these sorts of ads for the Urban Communication Foundation. So it's nice that I spotted this one a few days ago. Here's my analysis, which doesn't include much commentary. At this point, I'm just trying to figure out how the ad works. You'll notice that I bracket out certain details, particularly the racial dynamic of this spot. I'll consider that item, and others, later. But for now, here's the commercial (as I see it):

A business suit-attired man boards a city bus, with another fellow following behind. The second man pushes a rolling cart. The bus appears to be a "local," which, added to the subtle background of busy street noise, suggests another working class day.

The scene shifts to an interior shot; we're looking down (higher than the passenger level) upon the man who steps up the stairs. His companion follows him; his cart is filled with papers and a shipping tube.

Then the camera position switches, placing the audience behind the businessman; we walk with him, nearly as him. The location is still a bus, but it is not longer "just a bus." Venetian blinds drape over the windows. A phone chime rings. Fluorescent lights are mounted to the roof. One of those ubiquitous round analog clocks hangs on the far back wall. We spot a photocopier in the background, a coat rack and water cooler on one side, and a female staffer addressing the boarding businessman on the entrance-side. Other staffers greet his arrival as well.

The businessman is cheerful, his smile warm. He exudes confidence. He sits down and pulls out his mobile phone. Behind him, a white-collared technician is fixing the photocopier. Clearly this is a real office (though still on a bus).

The boss just emailed me and wants the new proposal ASAP.

An older colleague (working with a pearl-necklaced woman wearing a yellow dress) points toward the primary character in this scene. In context, the man's pointing finger suggests some variation of, "Did you get the message? The boss wants that proposal." The businessman shakes his head diagonally downward and smiles again, expressing more confidence. He's tapping on his mobile device.

No worries though. My smart phone, it's from AT&T. I'm on the nation's fastest 3G network...

The camera adopts his viewpoint. We are now looking down at his phone, revealing a close-up of that most quintessential of business graphics: a set of pie charts. A finger click detaches one pie-piece from the whole. Money is being made, we might presume.

... So that proposal? Delivered.

The scene shifts. First, a quick cut of a finger - not his - pressing the button to open the door.

Then we are outside once more. The businessman exits the rear-entrance, stepping onto the sidewalk. His trusty companion follows behind, lugging his rolling cart. The cart is filled with paper - perhaps an analogy to data. A voiceover affirms that AT&T offers the nation's fastest 3G network, illustrating why the company is so popular with smart phone users.

As consumers and evaluators of this ad, we are left to consider its implications. What does this ad say about office work and public space? I have some ideas, but I'd love to hear yours.
Email ThisBlogThis!Share to TwitterShare to FacebookShare to Pinterest
Posted by highway163 at 11:49 AM

Well, I'm no expert, but I really miss the days when people could get away for a minute instead of tap tapping away all the time. Sure we might not be able to go to the zoo together if we couldn't check the e mail or do the conference call, but now, its everywhere, even on days off or late into the night. That can't be good for the old blood pressure. (I suppose that's why they make the point of saying 'somedays it's just a bus).

Another thought- and I know you were going to mention the racial element later- Maybe the fact that I even notice his race says something about me, however I think the fact that there are no other African Americans on the bus makes him stand out, vaguely reminding me of Eddie Murphy's old 'White like me' sketch on SNL, showing, patronizingly, how far we've come.

I'm with you on this one, "FitToSeeJane." Indeed, I'm looking for the YouTube video to the Spring 3G Family-visits-the-museum commercial from earlier this year (here's my SbS of that one: http://tinyurl.com/caelwp). I'm sure it's out there; I'm just using the wrong keywords to find it, I guess.

And yep, your connection to that Eddie Murphy skit calls up some intriguing parallels. I want to think more on this. Thanks for sharing!