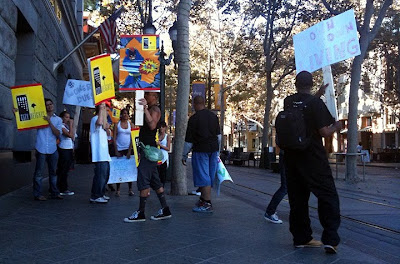 Last Friday, I was grabbing a beer with a new departmental colleague, David Terry, when we spotted this San José protest. Folks were chanting, waving signs, and drawing attention to their cause. We had to stop a while and see what the fuss was about.

Problem is: We couldn't quite understand the point of this revolt. The protesters were shouting slogans about "lower dues," which makes sense in a certain way. But then we had to ask: what were they rebuking? What dues? And what's with that other sign that announced, "Downtown Living"?

Then it all became clear. These scruffy looking "protesters" were advertising $270,000+ condos. They were apparently being paid to provoke some sort of rebellious attitude in support of local landlords.

Ah, give me that vibrant downtime life!
Email ThisBlogThis!Share to TwitterShare to FacebookShare to Pinterest
Posted by highway163 at 11:00 AM

Wow, that's amazing! I don't know whether to be appalled or impressed! And, my goodness - only 200K for a condo??

You have to smile at the creative advertising.