Where does Route 66 End? Does it matter? 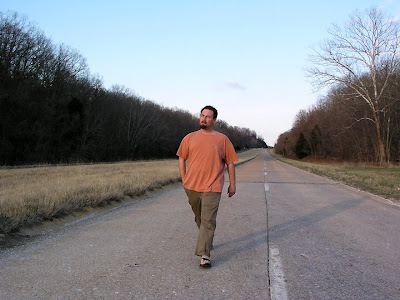 I'm finishing an essay due to be published in Critical Studies in Media Communication, a piece called "Two roads diverge: Route 66, 'Route 66,' and the mediation of American ruin." The essay explores the highway as both a material environment, that is, a place with buildings and people and landscapes, and as a constellation of media texts: buttons and videos and souvenirs and the like. The article is the scholarly side of a trip I took, from which I also produced an end-to-end website. "Two roads diverge" has been accepted, and I'm now wrapping up final edits.

Working to that conclusion, I recently came across a New York Times article that featured an "end of the road" sign being placed at Santa Monica Pier as part of an 83rd anniversary celebration for the Mother Road. While U.S. Highway 66 never officially terminated at that location -- before the road was decommissioned in 1985, the most recent endpoint was the intersection of Olympic and Lincoln Boulevards -- some boosters decided to mark the pier as the terminus anyway. It's more photo-friendly, they explained.

My essay is about the way we lay new media texts atop the old roadside, sometimes even building new tourist experiences away from the highway to attract tourist dollars. In this way, simulacra replace simulation, which replaces locale. From this perspective, the essay extends from my long-term omnitopia project (while also pointing a direction toward new scholarly projects). Thus you can imagine my delight when I read a quote by Route 66 Preservation Foundation chair James M. Conkle who explained the choice to create a new terminus for the old road: "It's a myth . . . but it is a myth added to all the other myths of Route 66."

Considering the long journey I took just getting to this point in the essay, it's nice to get some confirmation that I've been heading in the right direction.

Update (with photo of new sign): Where does Route 66 End? Redex
Email ThisBlogThis!Share to TwitterShare to FacebookShare to Pinterest
Posted by highway163 at 2:24 PM