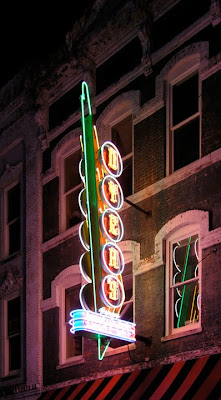 During our 2007 BBQ Tour, we enjoyed the opportunity to spend an evening on Memphis's famed Beale Street. It's a sort of Disneyland of blues, with lots of fauxcales designed to produce an experience of place without the risks of genuine encounters with racial or class-Others. 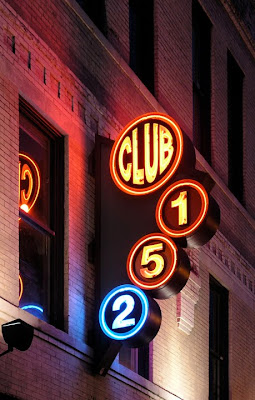 Even as music poured out from every would-be juke joint and funky alley, I gravitated to the neon that lined the street: a chain of blinking, gaudy signs that produced a perfect conflation of every blues town I'd never had a chance to see. I wish I'd had the foresight to bring a videocamera to capture the animated signs! The final image on this page, walkers under King's Palace Cafe, has long frustrated me. I didn't have a tripod that night in Memphis, and the long-exposure resulted in a blurred pic. Still, I love the unreal effect of the lengthy shot upon the sky, creating a surreal blue that conveys something of the artificiality of Beale Street. 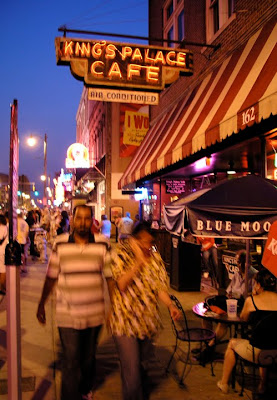 (Photographs by Andrew Wood)
Email ThisBlogThis!Share to TwitterShare to FacebookShare to Pinterest
Posted by highway163 at 9:30 AM