Saturday night, with its nearly new moon and promise of few clouds, was a great evening for stargazing. Jenny had done some research on the Fremont Peak Observatory and found that a local group of amateur astronomers regularly share their telescopes with folks interested in seeing the celestial sights. So we made our way in late afternoon. Problem was, ocean fog had already rolled over the coast, and the skies were gloomy. Driving along 101 we feared that our first night at Fremont would be a bust.

However Fremont Peak rises well above the usual fog ceiling, and by the time we reached the parking lot and found the Valley View Trail, the twilight panorama looked something like Caspar David Friedrich's Wanderer Above a Sea of Fog [wiki].

Staring out over the Pacific, we had to remind ourselves that we were seeing the top of the fog, not the surface of the water. Exposing for the setting sun, we couldn't quite coax our camera to capture the scene, but that's OK. We are now inspired to learn the art of High Dynamic Range imaging so that we may better convey the experience. 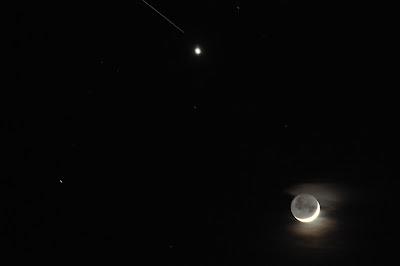 Once the sun sank beneath the clouds, we walked to the observatory and found a crowd of people already seated in the living room-sized meeting space where an astronomer had already begun highlighting some of the astral phenomena we'd see that evening.

Students from a local college and, as near as I could discern, a nearby middle school had gathered. A few kids were practically leaping out of their seats with enthusiastic questions about globular clusters and black holes, while many others wandered about, their eyes fixed on their mobile phones. Fortunately the speaker offered a second version of his talk, and Jenny and I enjoyed the chance to anticipate the evening ahead.

Before long we climbed the stairs of the 30-inch Challenger telescope to peer at Saturn, its rings forming a narrow line that bisected the planet. Later we would view M13 and the so-called Sombrero galaxy. Of course, our favorite body that night would be the moon. It was barely a sliver past being entirely dark, yet close-up views showed some of its secrets. 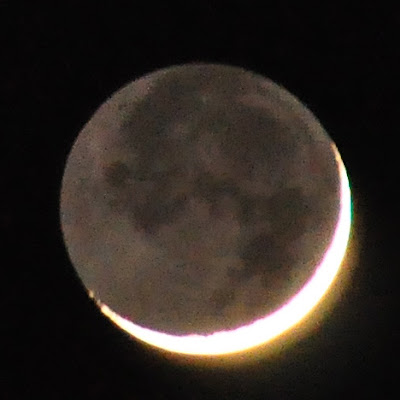 I recall thinking earlier in the day that we shouldn't bring our longer lens for our photography experiments, given that we planned to focus our attentions on the nighttime sky and would want a fairly expansive image (regretting that we don't yet have a wide angle lens). Happily, I chose to pack the alternate lens anyway.

Wow, am I glad I did. While the moon was almost completely obscured, we found that our D5000, set with a 10 second exposure, could pick up details that were invisible to our unaided eyes. At the same time, we remembered that the rotation of the Earth and the distortion of the atmosphere would complicate our desires for a crisp, clean shot. We thought that the results were A-OK, all the same. An astronomer took a look and agreed.

Then our new friend announced that the space shuttle and international space station would shortly cross our view. Sure enough, we saw both bodies within moments. Jenny and I had never seen spacecraft moving across the stars before, and we both were amazed. I thought back to 1957 when folks stood out in their backyards, anxiously peering upward to spy the tiny Sputnik racing overhead.

Using our camera's long exposure, Jenny and I photographed the shuttle as a thin, bright light. Also, you can spot the line of the space station in our second photo [above]. 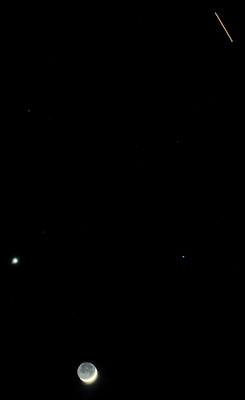 Finally as the classroom kids were rounded up for their blessed departure we could focus our efforts on shooting a nice pinwheel. We needed some peace and quiet for this shot, especially as we struggled once more to find Polaris. The city lights that spread out north of us didn't help matters much because they blotted out much of the sky in that quadrant. But we eventually spotted the North Star and commenced to playing with various settings. Our favorite result took 30 minutes (plus an additional 30 minutes for our camera's noise reduction process to work its magic).

At that point, it was time to head home, so we gathered our gear and made way down the red-lighted walkway to our car. It was after midnight when Jenny announced, "Well, it worked." Normally I would have pulled over right away to take a look, but I was too tired at this point to care. The next morning though, I smiled at the results. It took just a tiny bit of Photoshop tweaking to produce some semblance of what we saw that night [click the image for more detail]. 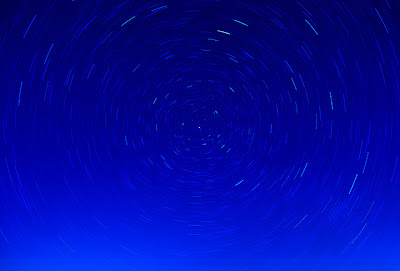 (Photographs by Andrew and Jenny Wood)
Email ThisBlogThis!Share to TwitterShare to FacebookShare to Pinterest
Posted by highway163 at 12:46 PM