A delightful holdover from Disney's past, the Carousel of Progress continues to spin through the decades, depicting four eras (the 1900s, 1920s, 1940s, and "present day") of a typical American family's embrace of new technologies. At the same time, the Carousel showcases how Disney and corporate America (initially General Electric) have spun together a vision of American life that, for all its eccentric whimsy, largely came true.

The last time Jenny and I visited Disneyworld, we were able to enjoy the ride as the sole audience members in the room designed to accommodate 240 people. Thus I often feel a bit nervous that each turn of the carousel, first introduced at the 1964-65 New York World's Fair, may be its last. Yet somehow Disney keeps playing that toe-tapping paean to progress year after year:

"There's a Great Big Beautiful Tomorrow/Shining at the end of every day."

After an introduction explaining Walt Disney's role in creating the Carousel, the attraction with the chirps of robins and a new year "right around the turn of the [twentieth] century," a time when moving pictures, high speed train travel, and buildings that tower over twenty stories - as well as gas lamps, ice boxes, telephones, "talking machines," and other domestic improvements - portend a golden age for the American family. 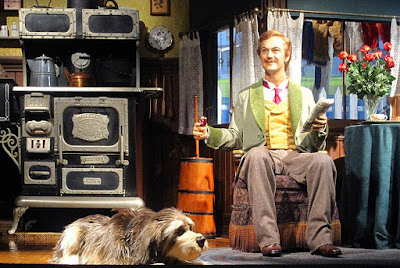 The show is narrated by a father who seems to rule his roost with a combination of firm hand and benign neglect. Mom is toiling away at the wash, which at least now only takes her five hours to complete, while Dad makes the introductions. We first meet his son, who's using a stereoscope to ogle at hootchie-cootchie girls of the 1904 World's Fair, and then his teenaged daughter, who's waiting to get whisked away on "one of those new horseless trollies" for a date.

Life is good for the American family, Dad says, and it's only getting better. Indeed, the patriarch announces that he'll also head out to town to grab a root beer with the boys. Mom won't mind staying home to finish the wash (he presumes). As the first act draws to a close, the wheel turns and we return to the show's theme:

"There's a Great Big Beautiful Tomorrow/And tomorrow is just a dream away..."

In the second act, the house is even more packed with wires and "electrical servants." Most importantly, the American family now has indoor plumbing, which hardly seemed possible just twenty hears ago. Yet Dad is less an expert than an awestruck observer of this new world. In fact when he tries to show "Mr. Edison's" inventions to the audience, he manages to blow a fuse, shorting out the entire neighborhood ("Drat! That's the third one this week"). Fortunately Dad's got a son to fix things.

Meanwhile, his wife continues to toil away, but now she's working for projects beyond the family domain; she's sewing Independence Day costumes for her ladies club. There's no guessing her thoughts about suffrage [as compared to earlier, more politically engaged versions of the show], but Mom is clearly feeling her independence these days, especially as she repeatedly cuts Dad's speeches short to discuss her own plans. The dog barks and Dad drolly replies, "Rover, don't interrupt while Sarah's interrupting."

As usual, the younger boy playing with high tech gadgets while the older daughter prepares for yet another date on the town. While in the 1900s she was horrified to be seen in a corset by an audience ("I'm, I'm indecent!") she now has something new to embarrass her: being seeing outside in a Statue of Liberty costume. Dad tells her to hurry up anyway. According to the family's new Crosley radio set, folks are already lining up for the parade. It's going to be the best Fourth of July ever! 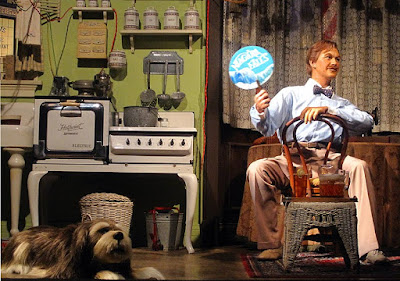 Surely life for the American family can't get any better than it is today. But it will. Peering into a Great Big Beautiful Tomorrow just takes some imagination. After all:

"Man has a dream, and that's the start/He follows his dream with mind and heart..."

Dad announces that the 'forties are "fabulous"[in an older version of the exhibit, they were "frantic"]. There's no talk of the world war, any more than the 1920s hinted at a looming Great Depression. Yet, despite Dad's cheery talk of new refrigerators and automatic dishwashers, Halloween in the 1940s brings a more complex and disquieting world. In fact:


"We've got something now called the Rat Race... It sure describes my life. I'm involved in something now called commuting. I drive into the city for work all day and then turn right around and drive all the way back, and the highway is crowded with fellow rats doing the same thing."

Grandmother reminds him, "That's what they call progress, dear." Oh, well, he laughs: at least they have television ("when it works!"). And one day, he predicts, people will learn Latin and Greek in front of their sets: "A new age of electronic civilization." The Carousel's audience - if there is one - likely laughs knowingly at this line.

Once more the kids are preparing for the holiday, with the daughter now struggling to lose some pounds by hauling out an old exercise machine. And Mom is still hard at work, this time wallpapering the family's new rumpus room. She asks for help, only to be reminded of a paint-stirring machine that Dad cobbled together from home appliances.

Mom sighs, "Yes, John, you're a genius. Of course this will ruin my food mixer, not that you'd care." To which Dad replies, "Oh, good ol' Sarah. Always the last laugh." Clearly there's some tension at home. Things only get worse when Dad's clever contraption sprays paint all over the room, inspiring the tiniest bit of risque Disney humor: "You and your progress," Mom complains. "That paint-mixer just splashed paint across my rump - uh, rumpus room!" 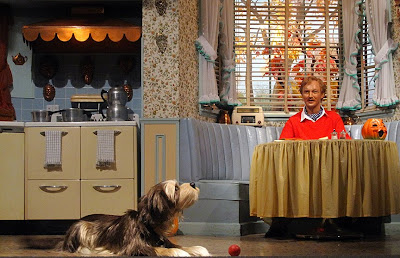 "And when it becomes a reality, it's a dream come true for you and me!"

At the turn of the new century, those old family tensions have apparently vanished. In fact the family is singing together under the twinkling of Christmas lights. Dad is working in the kitchen while Mom is sitting comfortably at a computer workstation. The son is is still playing with gadgets - some things never change, I guess - but his grandmother quickly beats the boy's high score on a virtual reality game. Best of all, the family's long-suffering daughter finally gets to poke some fun at Dad.

Actually the whole family is witness to the father's inability to keep up with the world of tomorrow, as his exclamations about Grandma's increasing game scores accidentally crank up the heat of a voice activated oven. When it explodes, ruining the holiday turkey, Dad hangs his head before returning to his peppy old self. His family teases him a bit and then promises that one day progress will deliver an oven that even he can't screw up. Things sure have changed.

Of course, this future is quite different than the one previewed at the 1964-65 world's fair. Back then "tomorrow" was set sometime around 1967, a culmination of the Rat Race that arose with the interstates. In that world, Disney's vision of Progress City would allow people to work in clean, streamlined downtowns but live in verdant, distant suburbs. Nuclear power would provide cheap, abundant electricity, and a cornucopia of consumer products would ensure a perpetually improving quality of life. Much of that world came true, but some did not.

Progress City, a version of Walt Disney's Experimental Prototype Community of Tomorrow, has since been kicked out of the Carousel of Progress. Now the diorama is a minor don't-blink-or-you'll-miss-it photo opportunity for riders of the Tomorrowland Transit Authority [the transportation display once known as the WEDway PeopleMover]. And the Carousel itself is mainly an exercise in nostalgia. Turning and turning, the ride doesn't attract much excitement anymore. Still, it's a great way to pass the time at the park, and to see how time passes. 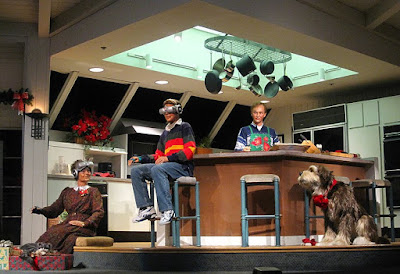 (Photographs by Andrew Wood)
Email ThisBlogThis!Share to TwitterShare to FacebookShare to Pinterest
Posted by highway163 at 11:24 AM