No, this is not all of Detroit; it is simply one facet of a place reeling under the weight of a collapsed auto industry and a disintegrating tax base. Once the nation's fourth most populous city, Detroit's numbers have now fallen to 1910-levels. Little more than 700,000 people live there today. Roughly one-third of its area - 138 square miles - lies abandoned. You can drive for hours and never see a chain grocery store. Even so, many of Detroit's remaining residents are working hard to breathe new life into their hometown.

I visited Detroit over three days in March, drawn to its ruins - especially those downtown office buildings that tower like tombstones, unlit at night. My memories are fragments: vapor plumes rising from steam vents, downtown traffic lights switched to blinking yellow, and a tense moment with a guy determined to break into a car while I was shooting the GAR building. They say that local boosters have come up with a crackerjack way to draw tourists: they want to build a $50,000 statue of Robocop. 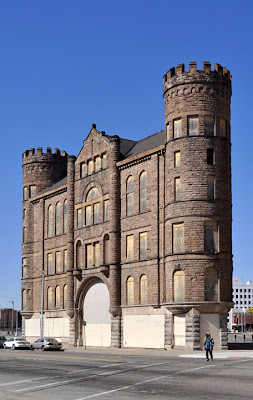 I remember other things too: the vibrant transformation of the Heidelberg Project; tasty BBQ at Slow's (and a nearly perfect burger at Miller's Bar, in nearby Dearborn); and friendly conversations with locals who share my fascination with Michigan Central Station, that Beaux Arts ruin that has come to symbolize, for many, America's postindustrial decline. During my visit I drove day and night, and I felt the survivor's guilt of someone who lives a country away from a place that is not the backlot for a grim movie but is, rather, home to its residents.

Detroiters are understandably tired of photographers reproducing the same images of ruin and decay that feeds hopeless narratives of a dying city. More than once I received a withering stare from a local who saw me as some sort of Thanatourist, a holiday-seeker of death and suffering. [Plenty of other times, though, I also received smiles and advice. Here, as in all places, most people are basically good]. I did not come to exploit this place - though others may disagree.

The news is not all bad. Citizen volunteers are working to strengthen their neighborhoods. Entrepreneurs and artists are streaming in, taking advantage of dirt-cheap housing and the hunger for new ideas. Urban farmers are wrangling with weeds to produce jobs as well as sustenance. Chrysler's defiant Imported from Detroit Super Bowl ad tells the story well enough: Detroit can work. Even so, I just can't shake the sadness I felt here.

We feel no guilt at photographing a true ghost town, but we feel a collective guilt for the wrenching transformation of the Motor City. It says something about our country, about all of us. At the same time, any effort to watch this place, to photograph it, to report on it, conveys another kind of guilt. Any story of this place is bound up in our fascination with death, the easy narrative that resists an honest reckoning. So I offer no truth about Detroit in my video-essay - just some pictures of a place caught between what it was and what it is becoming. 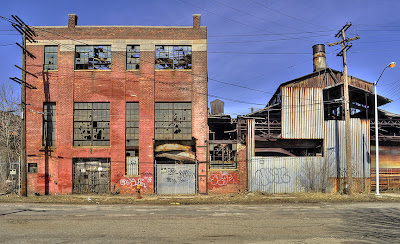 (Video and photos by Andrew Wood)
Email ThisBlogThis!Share to TwitterShare to FacebookShare to Pinterest
Posted by highway163 at 7:46 AM

Hey, wish I'd known you were in town (perhaps I should read more often?), I would have liked to have met you! Also, you'd have liked meeting my pal, photographer Bruce Giffin, who is an awesome street photographer. Here's his "Abandoned Detroit" web site: http://www.brucegiffin.com/

After visiting Pittsburgh, PA a few months ago, I got even angrier about what has happened in Detroit. That city saw it's industry collapse, too, yet it survived and thrived. A city on death's door is now repeatedly on "best places to live" lists.

What made the difference? How can Detroit come back like Pittsburgh did? Is it too far gone? Is it too big to save? How can this never happen again?

I love that your pictures capture ruins as still in motion. They are IN THE PROCESS of disappearing. The poles are tilting, but not yet fallen. The trees have just grown up in front of the roadside store, but are still growing.

Thanks, y'all, for your comments. They mean a lot to me. Visiting Detroit - never really a firm plan, just an inkling that became an unexpected obsession - produced many ambivalent feelings for me. I'm still working through my memories of that trip. The video is one response. Keep checking in! There are some other images of a different side of Detroit that I plan to share soon.