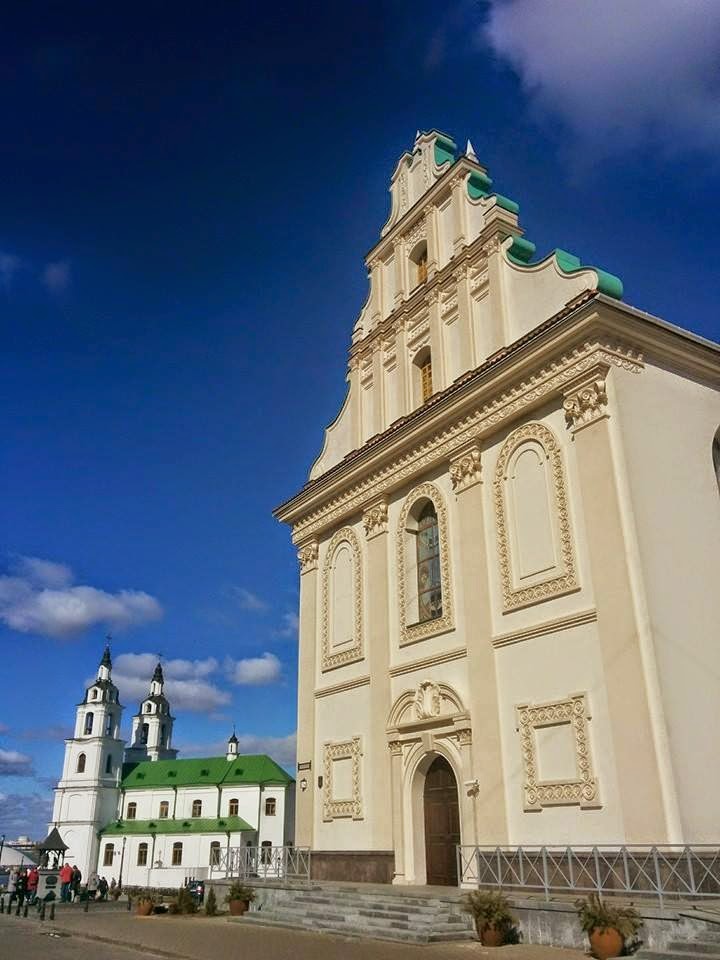 Despite a few cold snaps and the occasional coating of snow, my friends in Belarus tell me that we must have somehow skipped winter this year. As temperatures raced past the freezing mark and hovered at a balmy 5 to 10 degrees Celsius, I began to contemplate plans to ship some of my heavier cold weather gear back home. I'm told that spring brings mosquitos to most parts of this boggy region (though my landlady swears that none will bother us here in Minsk). Otherwise I loved the clear blue skies that started the week.

Last Sunday I celebrated the pleasant weather by joining some of my BSU colleagues for a concert in Upper Town. The event featured piano medleys and choral renderings of famous film scores and songs. The first half of the concert focused on American and French cinema; the second half was devoted almost solely to Soviet-era films. Thus I was introduced to the 1964 movie, "Walking the Streets of Moscow." Near the end, though, the singers joyfully abandoned the theme and performed the "humorous duet for two cats." But this crew transformed the piece into a cacophony of many cats lusting after a tom. Still, the highlight of the night for me was a performance of "Un Homme et Une Femme" ("мужчина и женщина" in these parts). It really was beautiful. The rest of the audience agreed, because it was the first piece that earned the ever-wonderful Belarusian Collective Clap. 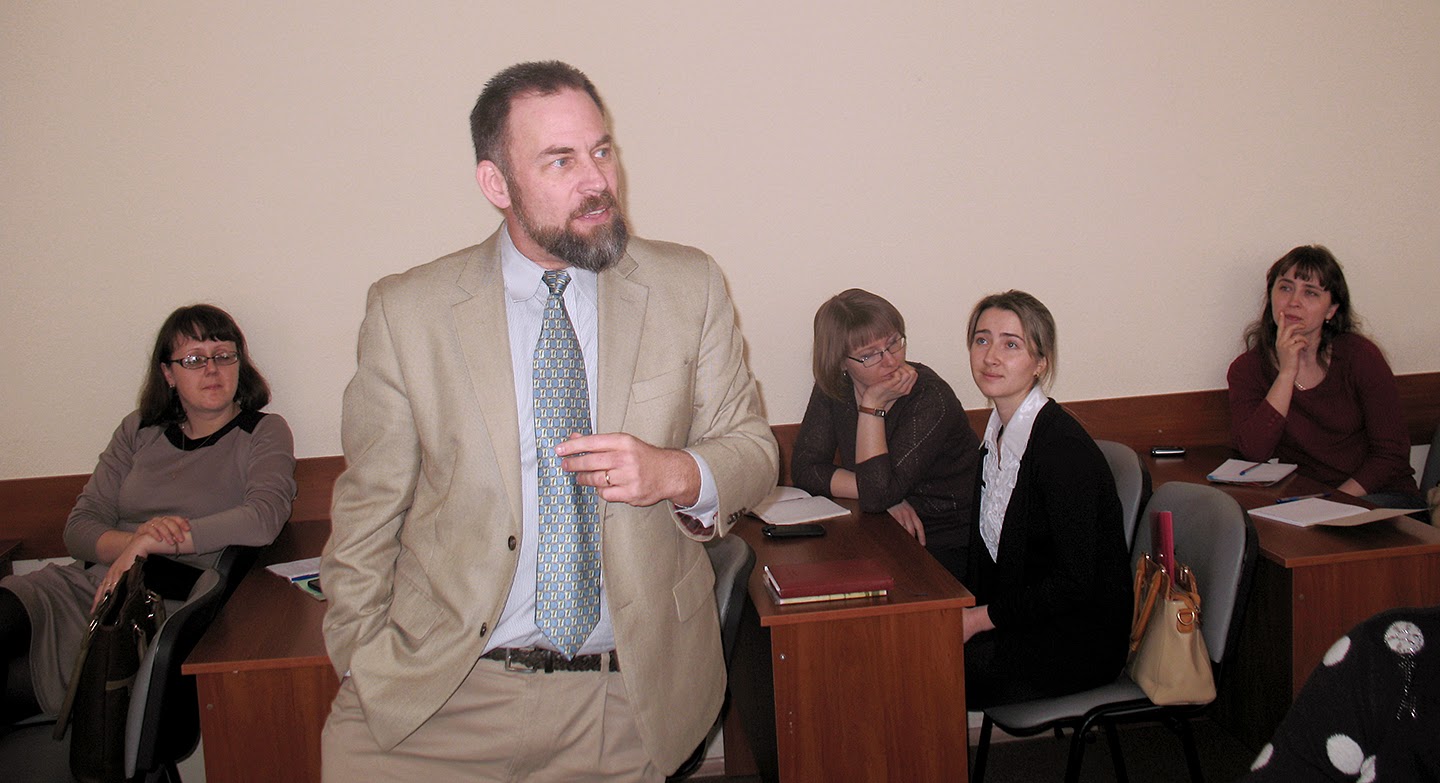 On Monday I visited the Minsk Regional Institute for Education Development, which allowed me to explore part of the city I've not yet seen and meet some really nice folks. Getting to the site entailed a few metro stops and a quick bus ride further into the outskirts of town (in an area informally known "sleepy town" - a nickname similar to the American concept of a "bedroom community"). Thus the Institute resides amid a large cluster of Soviet-style block apartments. The program chair met me at the metro and helped me navigate the local bus system to the site. Right away we commenced a high-speed tour of the facility (including its medical spaces for visiting teachers), a pop-in meet and greet with the rector and vice rectors, and as much tea or coffee as I could consume. 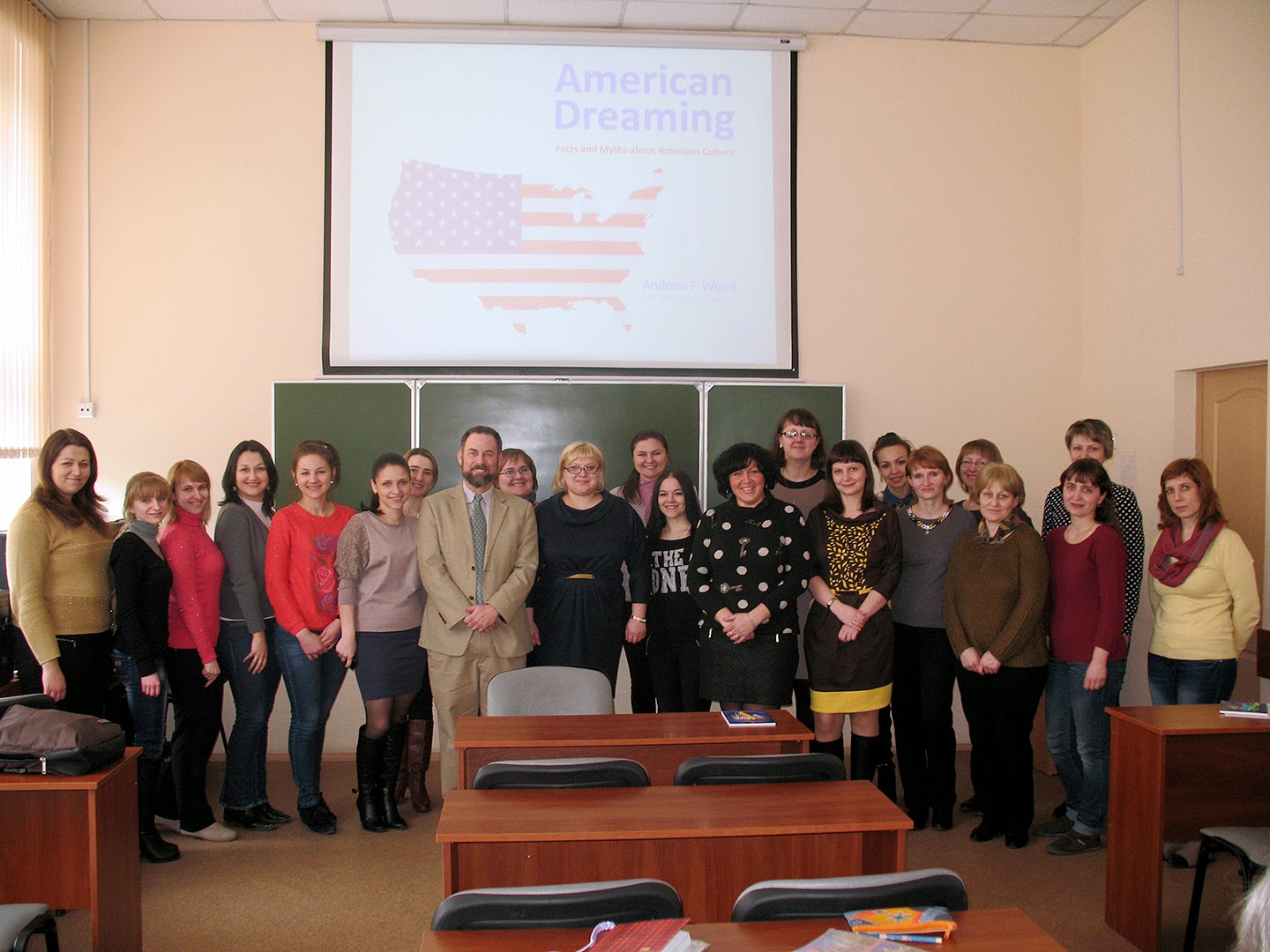 I delivered two presentations, separated by a ten minute break. The participants teach English at nearby schools and are visiting Minsk for a week to improve their skills. There were about 20 (with a few more set to join the group in the afternoon). Since the attendees had just arrived, they had not yet gotten to know each other. So it was somewhat of an "ice-breaking" day. Even so, they seemed to enjoy our two and a half hours of lecture, activities, and conversation. Normally I like to facilitate a sort of "Question Time" component during these visits, inviting folks to pose queries about American culture and society. One of the participants stumped me by asking why I wear my wedding ring on my left hand. Aside from it being a tradition, I honestly didn't know. Afterward my hosts invited me to linger for more coffee/tea. In that final chat, we discussed the complexities of the Ukrainian situation in light of the historical, cultural, and linguistic ties shared by the nations in this region. I found our conversation to be illuminating (and a bit surprising). We then said our goodbyes and I made my way back to the station.

Over the next couple days I hunkered down in my flat to prepare an evening lecture for BSU faculty and students on the subject of gamification (while also finding time to prepare a final exam for my MBA crew and a semiotics lecture for my undergraduate students). Looking out the window from my bedroom, I could see the golden orange facade of the apartment building opposite my own, and I wished I could chuck my work and enjoy a walk around town. But there was simply too much work to be done. Then - right around the time I was wrestling with my Prezi software that suddenly decided that my account was no longer active and opted to lock my files - I received an invitation to help interview a group of high school students at the U.S. Embassy Public Affairs Section on Friday afternoon.

Yeah, the week was spinning amazingly, wonderfully, out of control. But I've learned never to doubt the Fulbright mantra: "When in doubt, say yes." So I fixed the Prezi problem, delivered the lectures, graded the exams, celebrated the conclusion of the MBA seminar an after-class meal with my students, and started churning through student applications to participate in a program that involves travel to the United States. And then on Friday I met some truly remarkable kids. Some were nervous, some were almost alarmingly self-assured, but all conveyed the earnestness and complexity of Belarusian young people. My embassy colleagues and I dedicated about five hours to the interview process, and we entered a friendly (though spirited) debate afterward. Ultimately we selected a top candidate who, I'm sure, will amaze everyone she meets in the U.S. 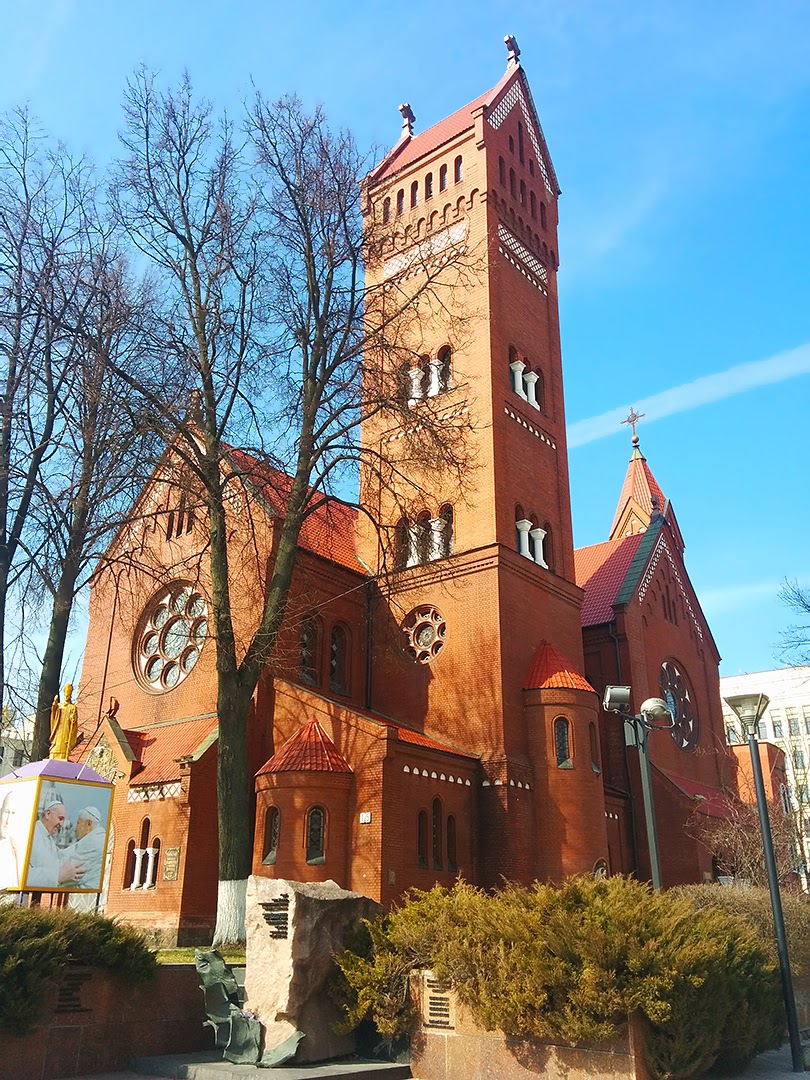 That evening I met with a BSU colleague and her friend to attend a concert at the "Red Church" (of Saints Simon and Helena). The baroque music was undeniably gorgeous, but afterward we spoke even more gleefully about the sight of a little boy sitting on the hard wood pew in front of us. While his twin brother seemed satisfied to stare ahead, this kid - all of about three years old, clad in the blue and white stripes of a sailer suit - stared wistfully behind, often at the stained glass windows above us. He wanted to be anywhere than here. And when his eye caught mine, I smiled. I remember what it was like to be so small, locked into the unfamiliar rhythms of other people. He never made a sound, but his watery eyes left no doubt of his feelings on the subject. Eventually his parents scooped him up, along with his brother, and departed - I hope - for an even more kid-friendly activity. 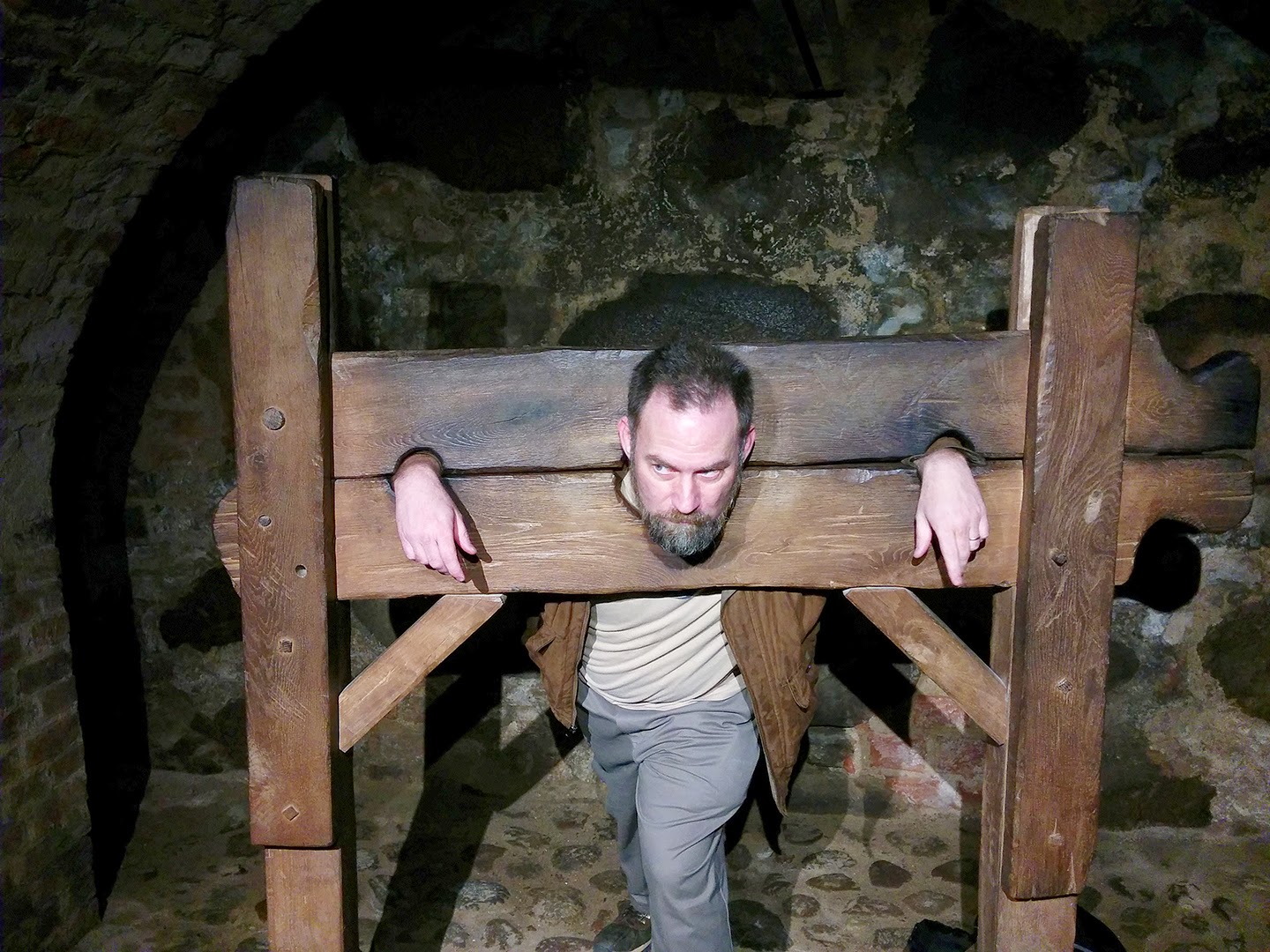 The week concluded yesterday when I met up with Eugene Karmyzau to visit the towns of Mir and Nesvizh - about 120 kilometers from Minsk. First, a bit of background: Eugene had attended my Epam lecture and stuck around afterward to chat share his enthusiasm for Southern culture. Then a couple days later he emailed an invitation for us to hang out and see some of the countryside. Sure, I'll admit, I was somewhat skeptical. I mean, who is this guy? But once more I recalled the Fulbright mantra and stifled my nerves:  Sure, Person I Just Met, let's hit the road! 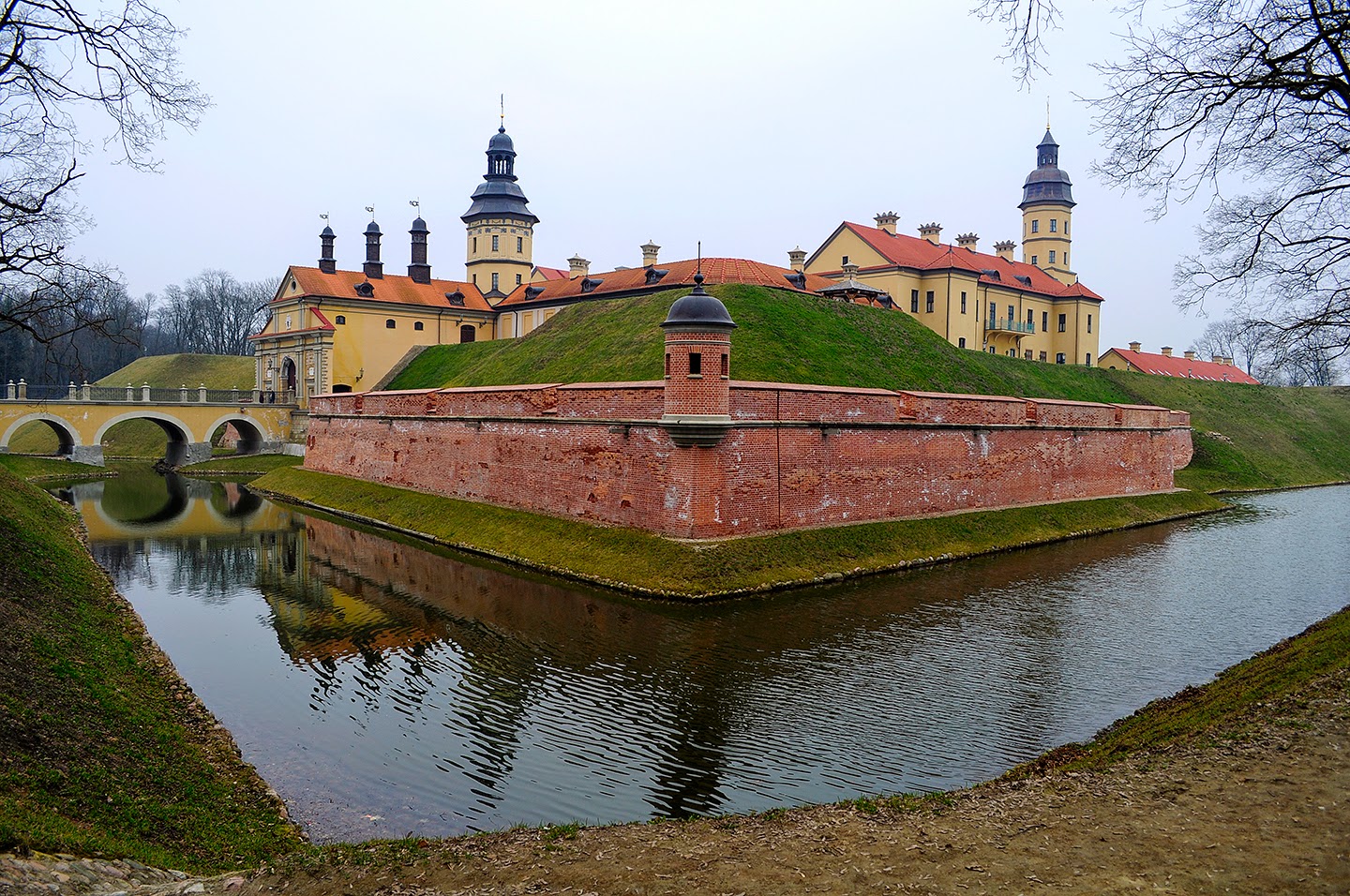 Eugene has a seemingly endless fascination with American small town life and country-fried rock and roll. So we had a blast chatting about movies, music, and politics. And I was reminded that for every cliche one has about a Belarusian perspective on the world, there is always someone who brings a different framework. We toured the castles and snapped some pictures, but Eugene was most especially interested in showing me the details of small town life away from the tourist spots. My favorite part of the trip: Barreling down the two-lane in his Jeep, racing alongside the empty potato fields, and head-banging to Lithuanian and Latvian folk-metal. Today I'm committed to sending Eugene a link to Austin Lounge Lizards' "Old Blevins" (he'll love that song). I can only hope he remembers to send me the name of that kick-ass Skyforger tune! 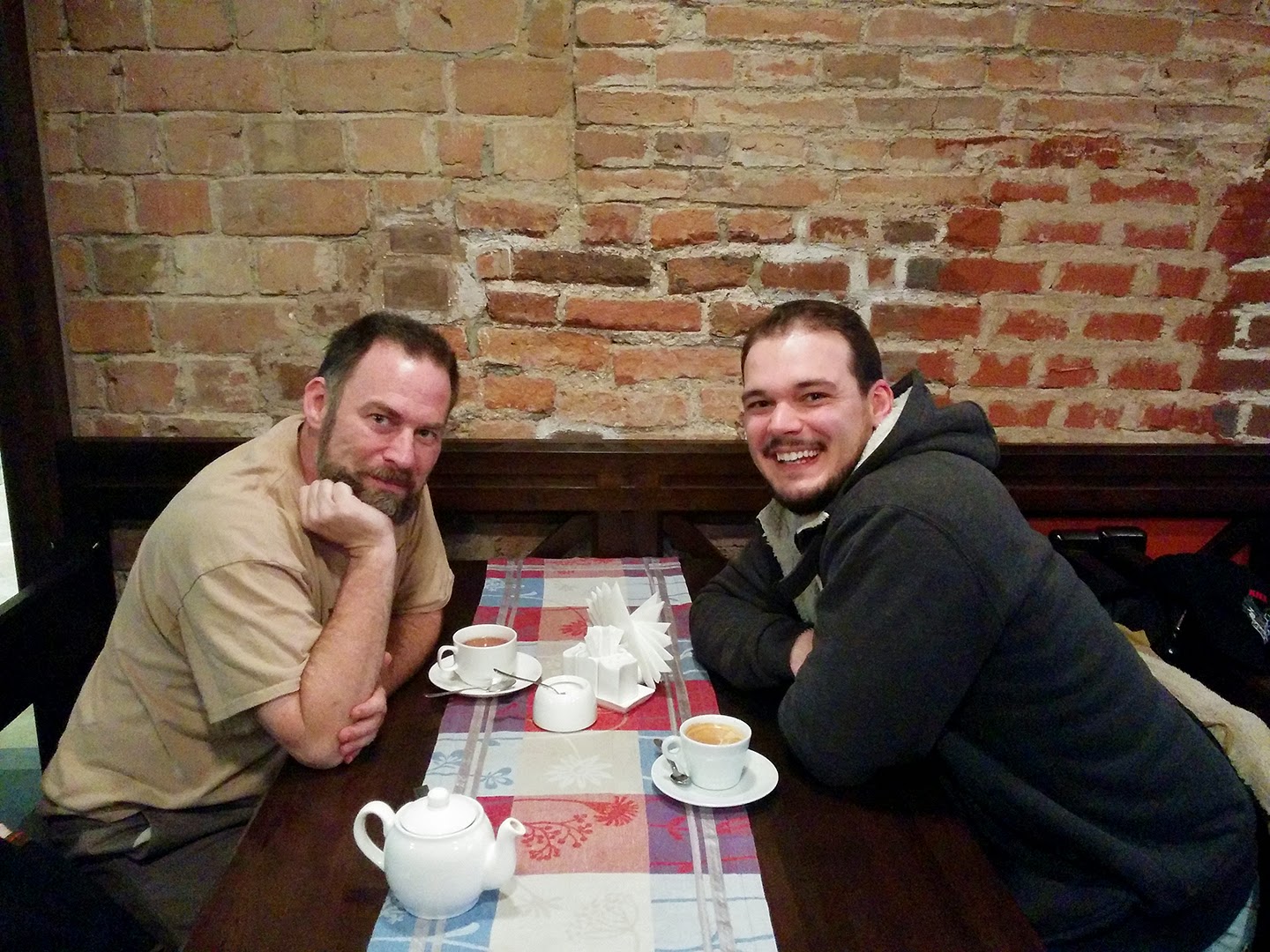 Email ThisBlogThis!Share to TwitterShare to FacebookShare to Pinterest
Posted by highway163 at 3:24 AM