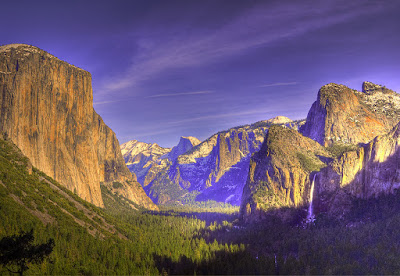 We finally visited Yosemite in winter. For years we've made the pilgrimage to that sublime valley, in spring, summer, and fall. But the snowy season has always eluded us. We planned a winter trip a little while back, only to find that our Saturn wasn't built to accomodate chains. Then our car went belly-up and we were forced to get a new [used] one. At about the same time, Jenny learned that the national parks were free for this weekend, and we managed to get one of the last remaining accommodations. So we bought some chains, practiced putting them on, and geared ourselves up for an arduous adventure - just in time for a stretch of unseasonably warm weather. Rounding the switchbacks of the CA-120 entrance road, we faced a new concern: would there actually be snow on the ground? 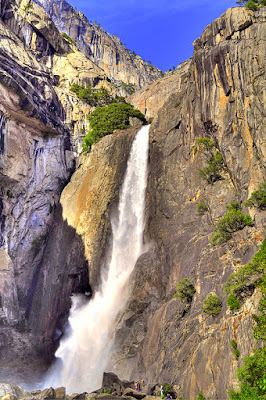 John Denver was rhapsodizing about the Rocky Mountain High when we first spotted a line of sludge along the road. With every turn the pile grew higher and higher, dusting the rocks before covering them altogether. In well-lit places the snow would disappear, only to return once we'd corkscrew into a dim canyon. By the time we reached Camp Curry, the white stuff could be measured in feet. Turns out that the park's high elevation and sun-blocking cliffs all but assure a decent winter snowpack. I was still wearing flip-flops when we scrambled atop the ice to get keys for our heated tent. At last we would see Yosemite in its wintery glory! 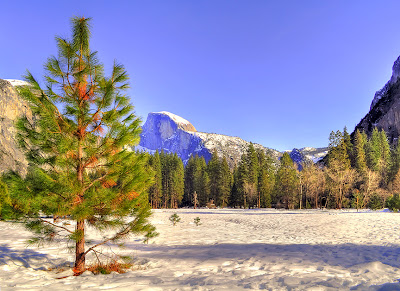 The panorama of white prairies dotted with the occasional snowman thrilled us [we live in California but still react to snow like Floridians]. As usual, our first major stop was the lower falls. We read that the tumbling water freezes at this time of year, but warm temperatures set loose gushing torrents that rivaled anything we've seen in springtime. Bypassing the warning signs, we scrambled over the rocks to get closer to those rainbow cascades. I remembered swimming in a pool under the falls during an early-summer visit. This time I'd have to keep some distance. Getting too close means getting drenched with icy spray. No matter. Jenny decided that we must climb those rocks once a year, as long as we can. To her, each step toward the glistening water is a sign of youth. 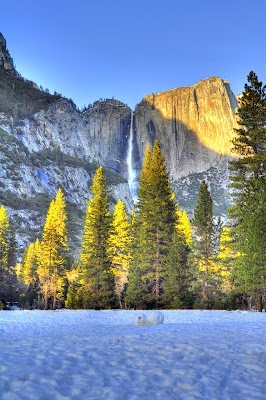 We dedicated the next hours to hiking and photography. Jenny and I took turns finding compositions that pleased us, imagining how our growing love of HDR would transform each high contrast tableau into a gorgeous picture. Above us, the sounds of crackling ice ricocheted through the air - evidence of the warming sun upon those frozen walls of stone. Leaving our car behind we tramped atop a silent white cushion of snow, picking out a path through collapsed trees that cast long shadows. I felt mighty smart about doubling up on socks, but all my preparations couldn't save me when one unexpected footfall dropped me into a waist-high pile of frozen precipitation. We snapped a few more pictures under the blue sky and then stood together in the quiet. By 4 p.m. the light began to fade and we headed back. 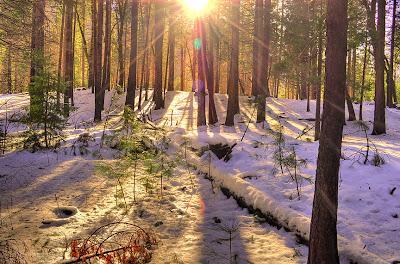 Mist hung above the snowy expanses when we returned to Camp Curry. We enjoyed a brief nap in our tent and then tackled a surprisingly good buffet dinner. Afterward I submitted to Jenny's entreaties and joined her on the dance floor. The band wasn't bad, but they played too much blues for Jenny's dancing sensibilities. Later on we bundled up for a walk under a nearly full moon that lit the valley. We brought a flashlight as our only precaution against occasional patches of back-snapping ice and wandered away from the lights, picking out constellations and staring at the dark outlines of Yosemite's monumental cliffs. Once we returned to our tent, we piled on the blankets and double-checked that the heater was working. The temperature dropped below the freezing line, but we stayed toasty. 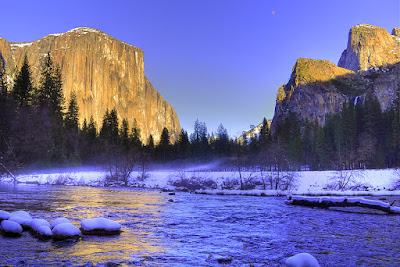 (Photographs by Andrew and Jenny Wood)
Email ThisBlogThis!Share to TwitterShare to FacebookShare to Pinterest
Posted by highway163 at 9:14 AM