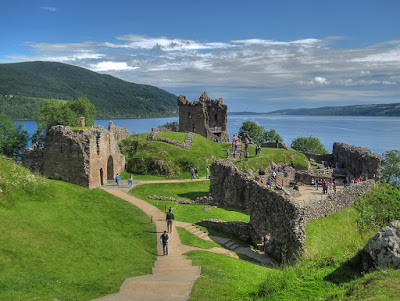 It was our last morning in Scotland, and we wanted to make it memorable. So we got up at 5:15 a.m. and set out across the countryside for one last castle: the Castle Urquhart (pronounced “Erkhart”) on the bank of the famous Loch Ness. Just the thought of seeing that famous loch and perhaps catching a glimpse of the legendary monster, Nessie, was enough to justify the early morning. The drive was a couple of hours, and we saw more sheep and more cows (though no highland ones with the bushy hair in their eyes). We also saw more quaint towns. As we drove along the length of the loch, we kept our eyes open for Nessie – just in case.

The Castle Urquhart was, again, mostly ruins; the last inhabitants had blown it up. But being perched on the shore of the loch made it enchanting somehow. Andy and I wandered around the grounds, taking pictures and enjoying the view of the stone walls against the water. It was truly a Scottish dream. Only one thing was missing for me: a bagpiper. Can’t you just imagine what it would be like to have a real bagpiper dressed in his kilt, standing on a hill with the castle behind him, and producing that unique, beautiful music? I could, and that faint sound of bagpipes in my head seemed to grow louder and louder. But, wait! That sound was not in my head. I was sure I heard the bagpipe, so I went to investigate. Then it was gone. Just, a minute or so later, I heard it again. I ran through the castle entrance and saw him. 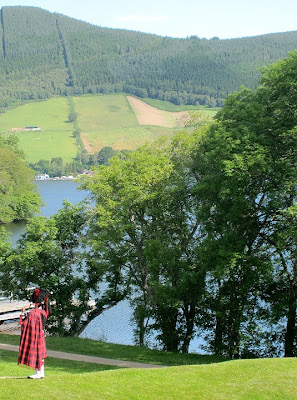 I called to Andy to come quick. I was mesmerized by the music. Andy came and took pictures and video, and several others stood up beside the piper to get their pictures taken. All I wanted to do was hear him play. It was like magic to me. I don’t know why but the sound of bagpipes playing is one of my favorite sounds. Later, he played again, inside the castle right next to the loch. We had spent a few minutes chatting with him and discovered that he is also a Fraser. That certainly got Andy’s attention, especially when our new friend corrected Andy’s pronunciation of the family name. We told him we were from California and exchanged a few stories. We had to keep an eye on the clock - our London-bound flight would be leaving soon - but we stayed long enough to hear him play a bit more. To my delight, he played my favorite bagpipe piece, “Amazing Grace.” He then played “Scotland the Brave,” a standard Scottish favorite, followed by Yankee Doodle (which made us Americans laugh). I swear, my eyes were tearing up, I was so happy. This was the best ending to our Scottish visit. As the piper belted out his last piece, Andy and I shook his hand and said our goodbyes. I was still on a high from that experience for a long time after. 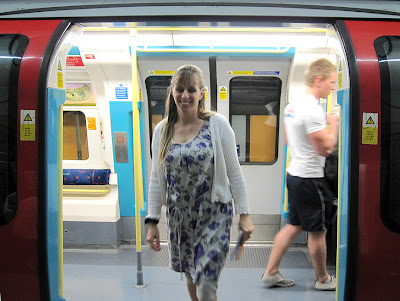 The flight to London was uneventful – exactly what you want a flight to be. And then we were there: London! I had always wanted to come to this city, so this was quite exciting for me. We rode the Gatwick Express from the airport to the Victoria station. From there we hopped on the tube. A couple of quick stops delivered us just two blocks from our hotel. We stayed at the Byron, just north of Hyde Park. It is a quaint townhouse style hotel. The room was small but comfortable and even had a window you could actually open to let some cool, fresh air flood into the room. How often do you find that anymore? And it was quiet, which pleased Andy. 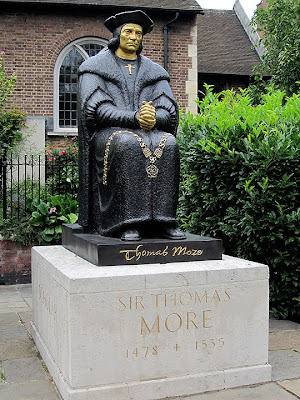 Right away we decided to take a walk. I wanted to really see London, so we set out across Hyde Park toward the Thames River. The park was lovely with lots of green, some statues, and people strolling about. It was a beautiful day. At the south side of the park we found the Prince Albert Memorial, all covered with gold leaf and intricate carvings. After the park, we made our way through the Chelsea area. When we got to the Thames we were surprised to find one of the things Andy wanted to see, a statue of Thomas More. Andy took a few photos and then we decided it was time to find something to eat. We came across a typical London pub wand enjoyed some fish and chips (this became a bit of a staple for Andy). We love the malt vinegar!

Then, it was time to really see something: Big Ben! For this we had to plot out the underground tube route, which turned out to be pretty easy. We love metros when we tour a big city. We set our sights on Westminster Station, and when we finally arrived and found the exit, we saw Big Ben towering above us. It was quite stunning, offering much more intricate detail than I expected. We wandered around for a while, walking past Westminster Abbey, crossing a bridge across the river, and studying the London Eye on the other side. Along the way, Andy noticed one of those shell game swindlers and wanted to watch for a while. There were also merchants selling trinkets and crunchy caramel covered peanuts. With all our stopping and looking, it took us probably a half hour to cross that bridge. 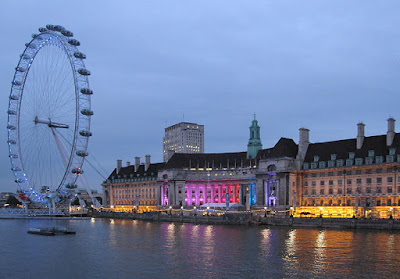 When we got to the other side we thought we’d just see what was up with the London eye. The lines didn’t look too long but we’d heard it was just an overpriced Ferris wheel. But the price didn’t shock us (15 pounds each) so we grabbed some of the last tickets they were selling for the day joined the late evening queue. They loaded us into a large plexiglass capsule with about 15 other people. It was big enough for us all to walk around and see the view from all sides. Up we rode, surveying a grand view of the city. Not only can you see Big Ben, the Parliament buildings and Westminster Abbey, you can also see Buckingham Palace and St. Paul’s Cathedral too. Since we rode it at night, we saw the city all alight under a black sky. Disembarking, we were tired, so we took the tube back to our hotel. The room was quiet and comfortable, and we left the window open all night. 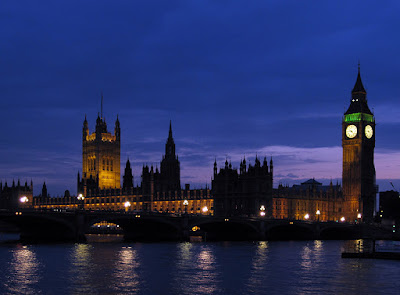 Day 2 | Day 4
Email ThisBlogThis!Share to TwitterShare to FacebookShare to Pinterest
Posted by highway163 at 9:30 PM