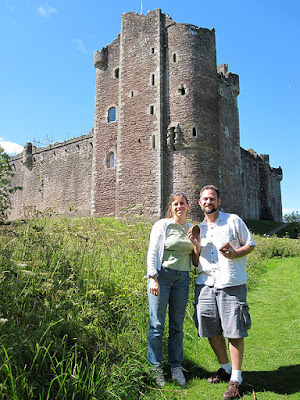 We landed in Edinburgh (pronounced “Edinbur-ah”) on Saturday morning around 8:40 a.m. But we met our first Scot while crossing the Atlantic. I sat next to Alistair on the plane and we talked for a good few hours of the trip from Newark. He talked about some Scottish history, his work as a platform designer for Chevron, and some places he recommended we see during our visit. His Scottish accent and gruff mannerisms were captivating. As we got off the plane he reminded us not to miss the Highland cows - he called them “ginger” with lots of hair hanging over their faces. We took a mental note to look for them on our travels. His conversation, and the fact that our flight from SFO began in the morning, meant that we got very little sleep on the flight. I got about got two hours or so; Andy got even less. So, it would have been quite understandable for us to grab a hotel right away and sleep. But not us! We had just landed in Scotland, where neither one of us had ever been, and we were ready for adventure, fatigue be darned.

We picked up a rental car and were ready for our first adventure – which, to our dismay, turned out to be Andy re-learning how to drive on the left-hand side of the road. We had done this in Australia, but it’s not as much like riding a bike as you’d like. Plus, this car was a manual, so Andy had the pleasure of learning how to drive with the stick in his left hand, something he’d never had to do before. That was probably the most challenging part, as first gear and reverse were right next to each other and were almost indistinguishable. Andy had his work cut out for him, but he managed well, except for maybe a few brushes with the curb. Another tricky part with driving on the left is that you tend to drift toward the curb without noticing. The passenger’s responsibility is to warn the driver when he’s getting too close. I did my best but wasn’t perfect by any means.

Our first stop (and official adventure) was about a half-hour away: Doune Castle. Not only did we start with an authentic Scottish castle, we visited the film location for many of the scenes of one of our all-time favorite movies, Monty Python and the Holy Grail. Andy found it on the web and had the brilliant idea to visit. The managers of the castle play up this part of the history, selling Holy Grail beer and even giving you coconut halves to clap together as you playfully gallop around the courtyard. The audio tour that they gave us featured Terry Gilliam, one of the cast members of Holy Grail, narrating both the long-ago history of the castle, tales about Earl Robert Stewart and his family’s lifestyle, but also the more recent history of the Monty Python scenes that were played out in each room. 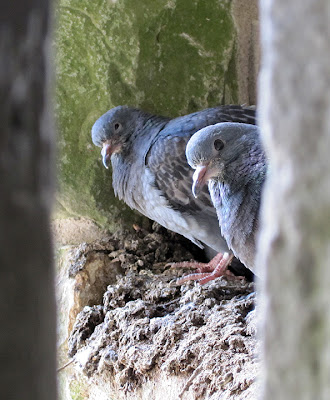 The servery and kitchen set the stage for Castle Anthrax and the many virgins tempting Sir Galahad. The upper room held the scene of the Swamp Castle played out between the King and his son who didn’t want any of what his dad had to give him, he just wanted to sing… ["Stop that, stop that!"]. The Great Hall was the scene of Camelot and the silliness that dissuaded King Arthur from taking his knights there. And the courtyard was where John Cleese fought off guards and guests to the Swamp Castle’s star-crossed wedding celebration. As Andy and I listened and took lots of pictures, we laughed and quoted favorite lines from the movie. Outside we walked the grounds, looking up to pinpoint the exact place where the Frenchman taunted King Arthur. It was a perfect first stop for the Wood Family.

By the time we left Castle Doune, we were famished; it was lunch time, and our last meal was a mediocre meal of airplane food served hours ago. The kind folks in the gift shop recommended a pub in the village, the Red Lion Inn. It sounded like just the place to grab some authentic Scottish pub food, and we were right. It was a great spot to join locals visiting to share a pint and some conversation. We had a lovely lunch of beef and ale pie, along with some fish and chips. Once we were done eating, the fatigue began to set in. But that was no deterrent. We had all afternoon to enjoy Scotland and we weren’t going to waste it! Besides it was only a two to three hour drive to Aberdeen where we had a room waiting, and we might as well enjoy the ride. But first we strolled around the village of Doune, taking in the local flavor and grabbing pics of the architecture. 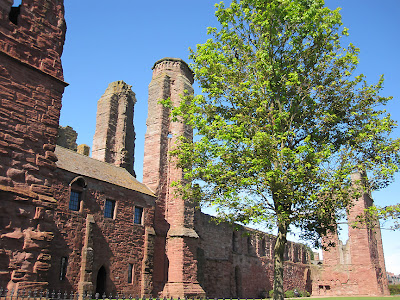 From Doune we decided to take one of Alistair’s recommendations and drive the coastal road up to Aberdeen, as opposed to the inland road that Google Maps gave us. It would be a bit longer but a lot nicer. Plus, he said we should definitely stop in Arbroath to see the Abbey and the Declaration of Arbroath that was housed there. Apparently Scots believe that our own U.S. Declaration of Independence was patterned after this document. Well, of course a challenge like that has to be investigated, so we made sure to stop and see this document. The Abbey fortunately was also quite lovely and a joy to see, so it was well worth the stop. Built centuries ago, it is now mostly rubble, like a lot of these old historic places; Doune Castle was similar. But what is left is beautiful: stone walls and some rooms and a large old cemetery with tall headstones – not like the small flush-to-the-ground ones you see in so many cemeteries these days. These were tall headstones covered with carvings and scriptures. 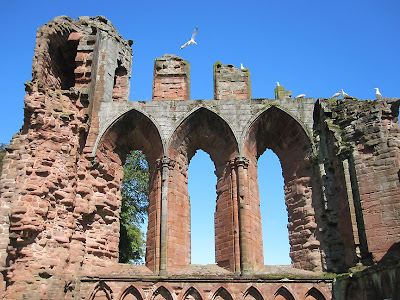 Seagulls are now the current residents of the Abbey at Arbroath. There were quite a number of them perched atop an old stone wall, flying around and even wandering through the gravestones in an almost reverent way. One of the rooms we found was the sacristy. The person in the gift shop told us this room possessed great acoustics, and if you felt like singing that would be the right place. Sure enough when we got in there, though we really had no intention of singing, we could tell right away that there was an enchanting sound reverberation. Neither one of us could resist a few bars of “Amazing Grace.” Even our weak voices sounded heavenly there.

After some hunting we found the declaration. It’s a copy, but it still gives the impression of being centuries old. It has lots of strips of its cloth hanging from the bottom (much like a flyer you’d see hanging at the grocery store with phone numbers on strips cut into the bottom), each with a wax seal from one of the people who codified it, representing regions of Scotland at the time. Unfortunately, it was written in another language so I couldn’t read it or verify its role as a basis for our Declaration of Independence. Of course, the shopkeeper confirmed what I’d heard and assured me that if I read the translation next to our document, they would be strikingly similar. In the shop, I was able to find a portion of the translation, and the one similarity I could see was list of complaints the Scots had against the King at the time. I remember from my history that ours has a list of complaints against the King as well. But otherwise I saw nothing all that similar; more investigation is needed. 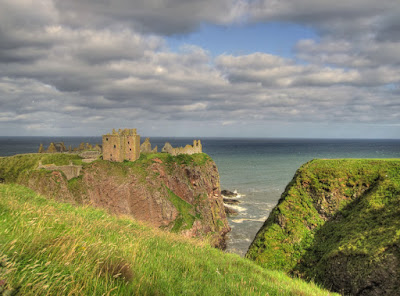 Continuing our journey up the coast, we decided to stop at a castle we had scheduled for tomorrow: the Castle Dunnottar. Unfortunately we got there a bit late to see the tour. This castle – or the ruins thereof – are set out on a cliff that’s separated from the mainland and mostly inaccessible accept for a small strip of land that joins it. It is high above the rocky shoals of Scotland, a gorgeous site to see. We came at the right time to photograph it in late afternoon light, just before the fog came rolling in. There was a bit of hiking needed to get out to it and to get to a nearby cliff that was perfect for photography, but it was well worth it. We said we’d try to return tomorrow to see it in its entirety.

By this point in the day I was falling asleep anytime I sat still for more than two minutes, but I had to navigate our way into Aberdeen – no small task. After getting lost a bit in that big city we found our hotel, the Carmelite in the center of town. We were quite hungry, so we had to head out again for a quick bite of dinner. Then, finally, we returned one last time to crash in our hotel. It had been an exhausting two days but entirely worth every effort. It was a great start to what promises to be an amazing three weeks.

Day 2
Email ThisBlogThis!Share to TwitterShare to FacebookShare to Pinterest
Posted by highway163 at 8:28 PM