Today started out pretty easy with just a flight from London to Hamburg, Germany on the docket. We slept in and got a late breakfast at the hotel, and then it was back to Gatwick to catch our flight. So far we’ve been flying EasyJet on these short legs, and we were skeptical because we’d never heard of them and because they have a strict one carry-on bag policy, which is lame since we never check bags. But we’ve actually been pleasantly surprised with their efficiency, attention to safety, and courteousness. So, today was an OK travel day.

Riding the underground (the U-bahn and S-bahn) was just as easy as in London, and it brought us within a five-minute walk of our hotel, which was within a block of a tall TV tower that is quite noticeable from most spots in the city. This hotel has a great location, but the architecture suffers from the lameness of the “International” style. It’s a big square glass box with lots of smaller boxes in alternating shades of light blue and white. If I were to see it in San Jose or Tampa, I would think it was really old and run down. 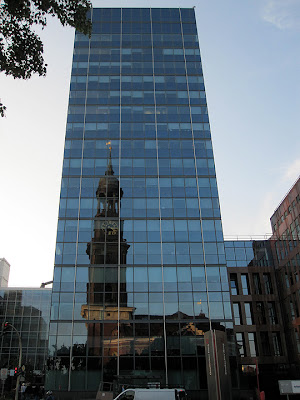 Thankfully when we got in it was clean, very neat and orderly - just how a German hotel should be. Speaking of which, we noticed the high German standards of efficiency and cleanliness right away and knew we would like this country. Andy said that this is what a country is like when people pay their taxes. Made sense to me, but I have also always heard of the German culture being this way, so I ascribe it to their history and way of life. I salute the Germans for that and for all their clocks (It’s nice to always know what time it is)! Anyway about the hotel: the room was more spacious than our London room and was comfortable and quiet. 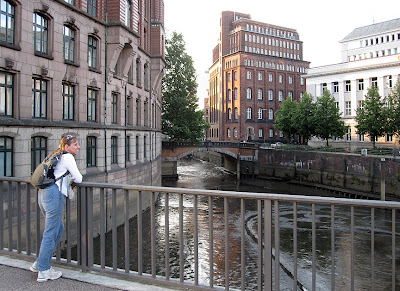 We didn’t really expect to do much in Hamburg, but having arrived shortly before dinnertime we knew we had to get out and explore; and I had a hankering for some German sausage with sauerkraut. When we asked for a map from the nice lady at the front desk, she circled the city center for us and pointed out the correct underground to get out there. After another pretty easy U-bahn ride, we arrived in a beautiful downtown area with modern buildings alongside the old historic ones. There were a few spires of different cathedrals shooting up among the more modern buildings. And we were alongside a waterway. 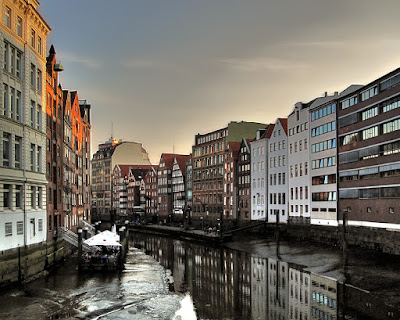 It looked like a lake that connected to canals that crept through the city. As we walked, we came to several open-air tents, like a market. Sure enough, most of them were restaurants selling delicious looking food. I saw big vats of sauerkraut, as well as potato salad and some sort of mushroom concoction. And, yes there was sausage – lots of it. We were looking at each tent, trying to decide which one to patronize, when we heard an accordionist and guitarist playing German standards. Well, that one would be the one for us, so we found a seat. We each got their best sausage with kraut or potato salad on the side (Andy’s not a kraut man) and satisfied our cravings for that great German food.

For the next few hours we wandered the streets, taking pictures and seeing the sights. We came across the church of St. Nicolai, which had in its courtyard a memorial to those who were interred in the prison camps during WWII. The church itself had been bombed out and its walls are in ruins. Andy and I talked about a country that wrestles with many conflicting feelings about that war. 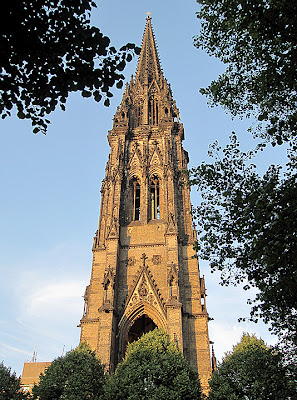 When the sun started going down, we went to a section of town I hesitate to tell you about. It is the St. Pauli Reeperbahn [Learn more]. This section of town, from what Andy researched later, is the most famous red-light district in the world. Because Hamburg is a major port town, sailors have traditionally come here in search of a good time, and they found it here. The Reeperbahn has since been gentrified, but there are still plenty of sex-shops, brothels and peep shows for any sailor.

Andy and I were just there for the neon, I assure you, and we saw plenty of it too. This section of town has also gained traction with the local punks, and we would see packs of them with spiky hair, chains, leather - and dogs, always dogs. In a way, we felt transported back to the ‘80s, but the punk movement remains a popular sub-culture in Germany. It was at least an interesting evening. But, don’t worry, we were quite safe; there were plenty of tourists our age and older folks photographing the décor and even taking tours. That was a bit surreal.

So, we really felt like we got to know Hamburg, and we liked it! I had never even heard of it before, but it is really a rich and wonderful town with lots of layers of culture. Tomorrow we would see even more. Andy has one thing he came here for: a “Miniature Wonderland.” If you’ve followed any of Andy’s writings, you’ll know that one of his major interests is “tiny towns.” We’re hoping this one fits the bill for him. Plus we’ll get to see more of Hamburg!


Day 4 | Day 6
Email ThisBlogThis!Share to TwitterShare to FacebookShare to Pinterest
Posted by highway163 at 9:20 PM