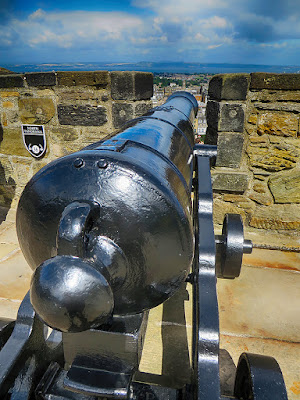 The adventure continues. Earlier today I joined Chris, Matthew, Crystal, and Eliot for a visit to Edinburgh Castle. After a brief but informative (and humorous!) tour, we wandered from site to site, checking out a prison where a U.S. prisoner carved the Stars and Stripes into the door of his cell, surveying the collection of swords and armor in the Great Hall, and walking through the solemn but beautiful National War Memorial. Among the many inscriptions to various groups and organizations who contributed to Scottish military efforts, I was strangely touched by a commemoration of ”the tunnelers' friends,” a bas relief carving that features mice and canaries used to warn soldiers about dangerous air. Afterward we raced through a surprise shower and slipped into a French restaurant where we chatted for a couple hours (and, yes, shared a couple more bottles of wine). 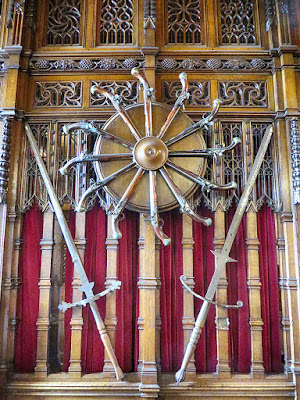 For the evening, I peeled off to see a two more shows. The first one was a bit surprising. I’d planned to get something called Shit-Faced Shakespeare, but actually bought a ticket for Bad Shakespeare. So close! The latter was a college performance that showed real promise and some interesting insight into the Bard’s villains. The second show was even more unexpected, inspired by a chance sighting of several performers on the Royal Mile pitching a show called Besieged, which is about the 2014 Sydney hostage crisis. Again, it was a student group. Lots of promise, lots of interesting implications about the intersection of violence, spectacle, politics, media, and grief. Returning to the apartment I chatted awhile with Hanns while sipping some whisky and have now settled in for some much needed rest. 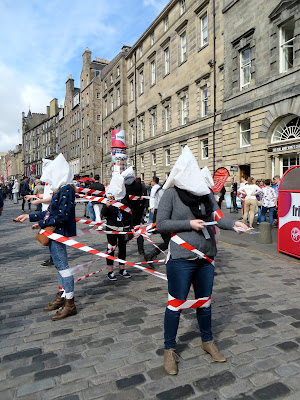