Scotland: "That’s not the one you want" 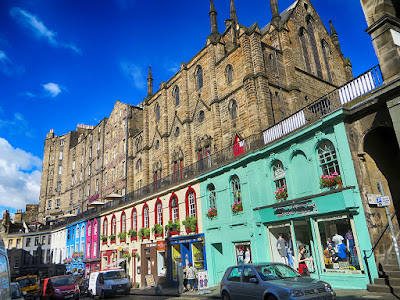 Today was initially dedicated to the Scottish National Museum, but the sun was so nice in the morning that we agreed that it’d be much more fun to walk around the city. We’re expecting lots of drizzly days, so the rare opportunity to enjoy blue skies was too nice to pass up. We walked to the new town area and surveyed blocks of apartments with formal Georgian facades and well-manicured gardens. Then we headed to St. Cuthbert’s Graveyard under gradually darkening skies and the shadow of Edinburgh Castle. Yes, I'll admit it: I used a headstone once or twice as an impromptu tripod. There, I said it. 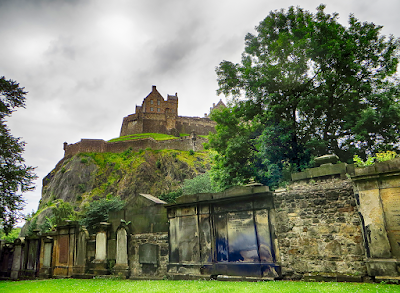 Afterward it was off to Deacon Brodie’s Tavern for my first taste of Oban whisky, a pint of the house brew, and some really tasty mac and cheese. Thereafter we ambled up and down the Royal Mile a bit, wandering past buskers, mimes, bagpipers, pamphleteers, pickpockets, and other working folks. Finally we went to a whisky shop for some Glen Moray to replenish the stuff that came with the apartment. The sales-guy poured his pitch on thick: “Ach noh! That’s not the one you want,” before pointing out bottles costing twice as much. Hanns and I nodded in appreciation at his various appeals, including a not-so-veiled implication that we must be trying our “very first whisky,” thanked him for his persuasive efforts, and bought what we came to buy. To any curious loved ones at home, by the way, we passed on the whisky flavored condoms. 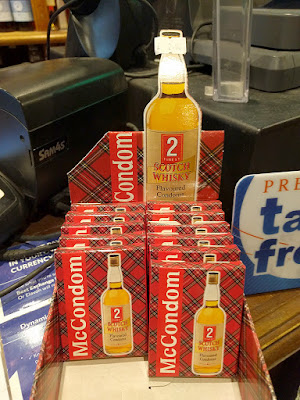