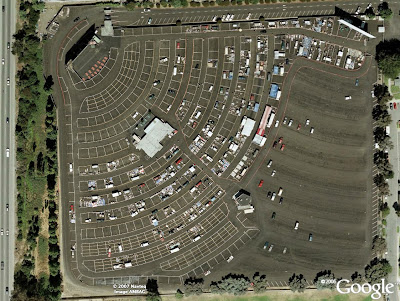 
The family-owned Skyview Drive-in offers the only chance to watch a double-feature under the stars on California's central coast. Located on Highway 1 in Santa Cruz, the Skyview (formerly the Encina) has shown movies since 1949, surviving the rise and fall of the drive-in movie craze. Today, approximately 400 drive-in theaters are open around the country, compared to nearly 4,000 in 1950. For that reason, Skyview is a particular gem. One of the early ads read, "Fill up your car, come as you are . . . no need to dress up here, bring the whole family and save the cost of a baby sitter. We even have free bottles for baby's formula." Since the Skyview sits on pricey California real estate, one can only be amazed that this place has endured so long.

I'm writing this on a Friday afternoon in springtime, anticipating tonight's double feature. The movies are not well reviewed and, frankly, I'm not terribly excited about either show. But I'm happy to see them cheaply and comfortably with my family. We'll pack a cooler, bring some glass cleaner for the windshield, and maybe some blankets in case it gets chilly. We'll arrive at dusk and stumble home after midnight. It's a great evening.

The Skyview features two screens and a terrific snack bar. The burgers are grilled outside, wafting their meaty aroma over the lines of hungry snackers. This being California, the aroma of various smokable herbs sometimes fills the air as well. Generally we grab some burgers for the first show and line up at intermission for some popcorn prior to the second feature. Intermission is time for one of those old school filler ads, reminding patrons that "the show starts in ten minutes." I've seen these ads for years now, but I never get tired of them.

Nearby, family pick-up trucks are sprawled with kids. Sometimes a solitary motorist carrying everything he owns in his car will occupy a space too. You meet all kinds at the drive-in. But the mood is relaxed and folks are friendly, as long as you don't flash your headlights on the screen. Commit that sin and you're liable to hear the projectionist over the radio: "Hey Beavis, this is the drive-in, not the drive through. Turn off your lights, dude." We've gone to the drive-in for years now, and can only hope that rumors that a nearby hospital hopes to buy the land prove to be unfounded. Drive-in theaters represent an essential piece of Americana: love of the automobile, clever integration of private and public spaces, celebration of spectacle. So, tonight we're going to the drive-in. We'll arrive early to get a decent spot, scarf down tasty burgers, snuggle close as the fog rolls in, and watch the show. When we leave, our eyes blurry after hours of movie-watching, we'll listen to the music coming from our car speakers getting fainter and fainter until we turn the corner and it's gone.

Learn More: Richard von Busack's article, Spirit in the Sky. I got the "come as you are" quote from this piece. Catherine Graham's article, Movies under the stars . . . or sometimes the fog. Offers a good overview of the rise, fall, and rebirth of drive-in culture. 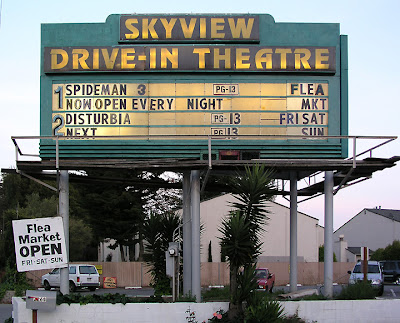 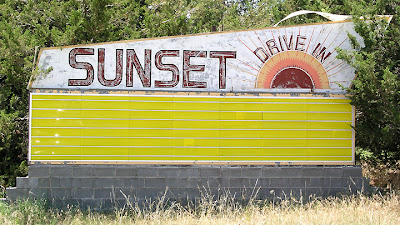 
Sad Update: The Skyview closed at last on December 2, 2007.
Email ThisBlogThis!Share to TwitterShare to FacebookShare to Pinterest
Posted by highway163 at 3:54 PM

The picture of the Sunset Drive In marquee is located in Northport, Nebraska.