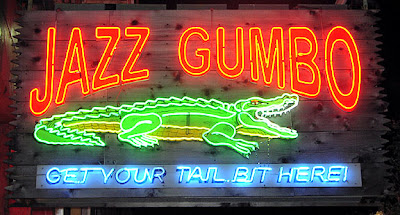 One of the great things about blogging is the opportunity it affords to share bits and pieces of ideas that have been floating around in my head for years without a venue for their promulgation. For example, I visited New Orleans five years ago to attend the annual conference of the National Communication Association. While in the Big Easy, I shot photos of neon signs on Bourbon Street (and nearby environs). These aren't meant to be "arty" or evocative; they simply seek to provide a denotative recollection of signs worth seeing. I planned to do something with these images, but never got around to it.

Then came the weather advisory. On August 28, 2005 (1011 AM CDT) the National Weather Service office in New Orleans distributed its warning about the impending monster storm. The message detailed an apocalyptic threat that reads like a missing passage from Revelations.

"Most of the area will be uninhabitable for weeks . . . perhaps longer . . . High-rise office and apartment buildings will sway dangerously . . . a few to the point of total collapse. All windows will blow out . . . Water shortages will make human suffering incredible by modern standards . . . The vast majority of native trees will be snapped or uprooted. Only the heartiest will remain standing . . . but be totally defoliated. Few crops will remain. Livestock left exposed to the winds will be killed."

We may never know if local, state, and federal planners dismissed this notice as hyperbole. But we do know that the warning proved to be prescient. And now it joins the list of documents presaging the death of cities.

I have not returned to New Orleans since Hurricane Katrina, though I might do so this summer. I've been told that the neon still shines despite the wholesale destruction of surrounding areas. RJ Eskow describes the eerie scene in the Huffington Post: "You can spend your entire visit in the French Quarter and downtown, and never know there had ever been a hurricane . . . You need to search for the real story of this damaged city when you're inside the tourist bubble . . . The real city is dying, and it's been replaced by a synthetic version of itself." To be sure, New Orleans has always been a simulacra, like Las Vegas and Times Square, or like any shopping mall. But the neon, a performance of neon, still glows, and it's still pretty cool. Check out the images and tell me what you think.

Follow-up: I just rediscovered an article I bookmarked several months ago about Johnny White's, a bar that stayed open throughout Hurricane Katrina.
Email ThisBlogThis!Share to TwitterShare to FacebookShare to Pinterest
Posted by highway163 at 9:29 AM