Memories of my Grandfather 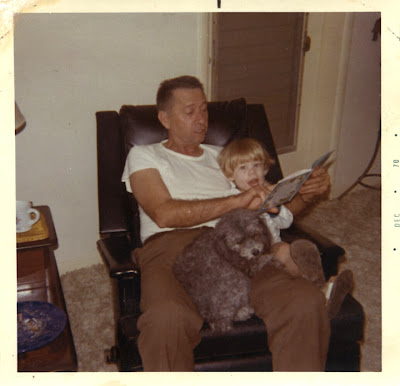 This is another in an occasional series of entirely autobiographical narratives about my early years. Lately I've been writing a bit too much about road trip stuff, and I thought I'd take a detour into some personal memories. Today I'll write a bit about growing up with my grandfather.

Preston Frazier wore a crewcut and carried a metal lunch pail to work. I didn't know him all that well, even though my Mom and I lived with him and my grandmother Charlene for a few years. Granddaddy didn't have a lot of patience for a loud kid running around the house, and I don't ever recall him laughing. But sometimes he'd tell stories. My grandfather was a World War II veteran, and occasionally he would share his experiences as a radioman on the Enterprise. He'd served in the Battle of Midway and in Korea. But mostly I remember weekends in which he'd sit in his easy chair and watch television pretty much all day and evening.

On Saturday afternoons Granddaddy watched ABC's Wide World of Sports, Hee Haw, and The Lawrence Welk Show (I'd go to bed hearing that jaunty tune, "Good night, sleep tight, until we meet again..."). On Sundays after the ball games he'd watch re-runs of Mutual of Ohama's Wild Kingdom, so I did too. My grandfather had married a strong and salty woman, and my mom and I had no problem making our presence known, but that house on San Helen Drive indisputably belonged to Preston Allen Frazier. We watched what he watched.

On weekdays, my grandfather would leave the house before sunrise and drive to the Sperry Rand plant, a place he labeled "the salt mines." His expertise was electronics, but I have no idea what he did there. In the evening he'd return home, sit in his chair, and order up a highball. Both he and Charlene drank regularly, and the house was often tense. Granddaddy in particular could be a scary drunk. But on occasion he could also be a pretty cool guy. I remember sitting with him in our back porch and repeating "Roger" and "Wilco" back to each other, pretending we were sailors in the Pacific theater. I remember that he'd make room for me in his easy chair so we could both pet the family poodle, Gigi. And I remember that Granddaddy was so grief-stricken when the paper carrier ran Gigi over with his car that he cancelled our subscription and announced he'd never buy a local newspaper again.

Granddaddy's garage held boating gear and a swell worktable covered with complicated gear, but I don't remember seeing any of that stuff used. For the most part, the Frazier family stuck to indoor pursuits. When my mom and I lived there in that ranch house in Dunedin, Florida, the adults would often play Bridge in the dining room. I'd listen to their mystical incantations about trumps and tricks and wonder what the heck they were talking about. More often the family would sit in the living room under paintings created by Charlene and talk. And I'd find a place on the L-shaped couch covered with thin blue cushions and try to participate.

Recalling those conversations, it seems that Granddaddy was opinionated about almost everything, announcing that the various screw-ups of the world needed to "straighten up and fly right." When people got their justly deserved comeuppance, he'd explain, "That's the way the cookie crumbles." And when the conversations turned to hot items like Vietnam or busing -- well, remember that we were living in the deep south. My mom told me about some of his right-wing political views and how she and he used to debate the civil rights issues of the day from sharply opposing sides, but I didn't follow those arguments too closely. I simply remember hours of conversation sprinkled with the phrase "this, that, and the other thing" serving almost as a comma.

Preston Frazier argued a lot, drank a lot, and died too early. He succumbed to a heart attack in 1976 at 61. My Aunt Linda tells me that Granddaddy died one day before he was set to retire. He'd done his time but had no opportunity to enjoy life after work, which seemed pretty unfair to me. His was the first funeral I ever attended, but I don't remember what people said about him. Instead I remember growing up in a town where high school kids practiced playing bagpipes in the afternoon because my grandfather moved his Frazier family to a Scottish-founded community. I developed a taste for broiled steaks because that meal was a special treat in his house. I still hum the Mutual of Omaha jingle on weekends because he watched that show every Sunday. And when I'd pissed away my chances for college after high school, I looked to the memory of Preston Frazier for inspiration, and I joined the Navy. I never heard him laugh, but I always hoped my choice might have made him smile.

According to Rootsweb, Preston Frazier is buried in a West Virginia Family plot: "Located on the property of Norma Frazier Johnson off to the right of Teays Valley Road, State Route 33, and between Beechwood Estates and Mooreland Place. This is on a knoll surrounded by pasture land."

• Florida Ranch: a small page dedicated to the domestic architecture of my youth
Email ThisBlogThis!Share to TwitterShare to FacebookShare to Pinterest
Posted by highway163 at 8:12 AM

There are 3 of us now who want to hear the jingle again because we can't remember the tune. Please post or send an mp3 of the melody.