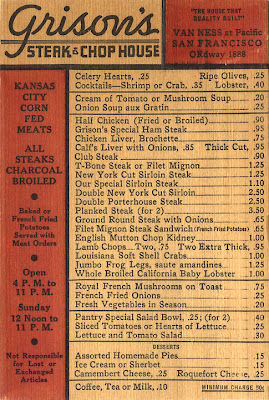 While flipping through my postcard collection I spotted this gem: a wooden postcard mailed in 1939 for Grison's Steak & Chop House, a San Francisco landmark long gone. On the back of the card, Walter Winchell (just "Winchell," actually) is quoted about the need to keep customers happy: "One dissatisfied customer can do your restaurant more harm than the praises of a thousand others can undo. So, if a man has a tough steak, don't give him a sharp knife, give him another steak." Apparently Grison's followed his advice.

Old-timers report that Grison's was one of the greats, weaving itself into the city's mythic architecture. Writing about his beloved "Baghdad-by-the-Bay," Herb Caen mentioned the place in a 1949 San Francisco Chronicle column: "...at Grison's, a beautiful married blonde is having a cozy dinner with a handsome bachelor attorney (and that's not news because her husband just happens to be out of town and they're only good friends anyway)." Sounds like the kind of joint you'd find some film-noir or between the pages of a detective novel, classy, but with some intrigue.

The prices shown on this postcard certainly take you back: a whole broiled California baby lobster for a buck, a New York sirloin steak for a quarter more. Then there were the odd items you don't often see on menus today: celery hearts, mushrooms on toast, Roquefort Cheese for dessert, and something called "English Mutton Chop Kidney." Can you imagine taking a time machine visit to San Francisco in 1939? Hit the Golden Gate International Exposition by day and grab a steak and a highball at night for under ten bucks, with money left over for a decent tip... That would be a fun day.

More than twenty years ago a steakhouse called Harris' took over Grison's 2100 Van Ness Avenue location. One day Jenny and I might drop by Harris' for a thick slab of beef (and one three-olive dry martini for me), and we'll see if we can still experience that bygone chop house vibe. In the meantime, I'd love to learn more about Grison's. If you have any memories or photos to share, please leave a note in the comment section.

Email ThisBlogThis!Share to TwitterShare to FacebookShare to Pinterest
Posted by highway163 at 7:56 AM

I don't know anything about this steakhouse, but I googled it because I found a lovely solid silver creamer at a thrift store. It was all black, but very heavy so I could tell it was silver. When I cleaned it up, it has a logo that says "Property of Grison's Steakhouse". I thought I would see if they are still around and go visit since it is such a grand piece. It must have been something! I could send you a picture of it. I wonder if there is someone who would have sentimental attachment to it?

I found an old heavy creamer sized pitcher at a thrift store. All black and weathered. After I cleaned it up, I saw the words "Property of Grison's Steakhouse". So i googled it and found your website. It is a lovely, heavy solid silver piece. I wonder if someone has sentimental attachment to it. I could send you a picture. I wish I could have seen this place!

That's very kind of you! Please feel free to email me the pic, and I'll post it on the Grison's page...

Hello,
As I'm sure you know Grison's was an SF classic, an elegant steakhouse decorated in what I usually call cowboy art-deco...think of the signage typeface in an early Perry Mason episode. Harris' is much the same today, minus the '40s touches.
They also had a mirror image restaurant on the southeast corner of Pacific & Van Ness, Grison's Chicken House, unfortunately, I never ate there. It closed several years before the steakhouse. Tagine just closed there, it's been a bit of a jinx location since Grison's. That menu is a great find.
Thanks,
Doug Edwards

I just found a wooden postcard that my Uncle sent my Aunt in 1954. It is Grison's Steak & Chop House. No more unusual items like in 1939. Most expensive item is Filet Mignon at 3.95! Too bad they are gone, I would have loved to send it to them, even though my Uncle wrote my Aunt a love letter in French on the back! How great to have lived back then! Carol

In a letter from my father to my mother dated 18 July, 1943 my father reminisces about going to Grison's with her while he was stationed at Fort Mason, before being shipped out to Hawaii. He was an officer and they were eventually separated over four years while he served in the Philippines during WWII. I am so glad I found this site and could get more information about a favorite place of theirs. My parents are gone now, after 68 years of marriage.

I would be interested to see the 1954 postcard and how the menu is different.
When I was about 13 my older sister and her friend Cookie Paul took me to Grison's and a movie. Our parents were away and left us a food budget which used carefully and then went to Grison's.

What I recall is that it was very elegant service. The major item was a beef roast served off a copper cart with a hood with au jus gravy, vegetables and popovers. All the food was excellent and established a bench mark for all meals since. Does anyone know of their recipes especially the popover recipe?

I printed the menu and will use it to design some meals to go with good red wine.
Thanks for posting the postcard and comments.
Michael