Tonight Vienna and I will watch 12 Monkeys (again), and once more I'll likely be struck by that image of a high-ceilinged department store filled with customers fading into a post-apocalyptic future devoid of human life.

Movies like 12 Monkeys call forth a nagging modern fear that we're all sitting precariously atop an edifice ready to collapse into ruin. We keep shopping, keep driving, keep building, and we hope that we're wrong to feel that the center of civilization simply cannot hold.

Then comes a documentary like Crude Awakening: The Oil Crash, and a far more substantial degree of confidence begins to give way. 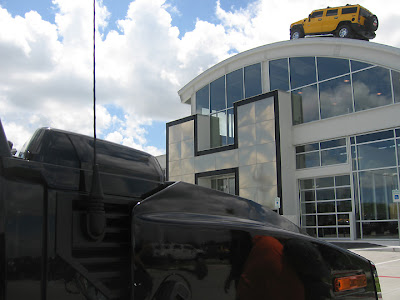 Crude Awakening gathers together an impressive array of experts ranging from oil geologists and historians to a former secretary general of OPEC, a former energy adviser to the president, the mayor of an oil boomtown-gone-bust, and even a Hummer car salesperson, all to consider the possibility that the world has reached an era of Peak Oil, that we've reached the summit of our production of oil and gasoline and now face a steady decline in our quality of life as demand exceeds supply.

Watching this film, I found it compelling to consider that the creation of oil was a rare and relatively brief set of geological events that, for most of human history, was no more relevant than the birth and death of dodo birds. From this perspective, our oil-based economy, largely born in the 20th century, is a blip destined to fade.

During that blip, though, we've witnessed the explosion of our global population as cheap energy allowed the birth of automobiles, suburbs, interstates, and global trade, the creation of the modern world (and its environmental discontents). Crude Awakening dares us to imagine the fate of the world once the oil runs dry.

In this world, shaky economies propped up by petrodollars collapse and we face the true price for our profligate ways. Prices spiral beyond imagination as the production of once-cheap products, luxuries we take for granted today, become unsustainable. The result is a new Great Depression, but a different one than the struggles we faced in the thirties. This is a Depression built on natural limitations not artificial speculations.

Even more frightening, the film marches through the alternatives to which many of us cling, those bridges to the future of more cars, bigger cities, and unchanged values. With hybrid cars, we hope we can continue to carpool two kids around town in mammoth SUVs. Maybe hydrogen technology will save us, or cleaner nuclear power. And then there's solar!

Crude Awakening argues that these technologies, some of which are genuinely promising in the long-term, are insufficiently developed to make a sizable dent in our energy needs for the next generation, and that the price of peak oil will ravage our societies sooner than that.

Already we're used to gas prices that have spiraled to crazy heights over a matter of months. And we know that it's going to get worse. What we don't know, what we can hardly imagine, is the harrowing reality of a world whose nations must wage perpetual war to secure dwindling oil supplies. We know that Iraq was really about oil. But are we prepared to invade Iran? Saudi Arabia? Iraq now wants us to plan our exit. Will we? With no more validity to our claims that our wars are meant to democratize the middle east, just what kind of country will we become?

And then there's the even bleaker future presented by Crude Awakening: a foreseeable world in which air travel and even auto travel reside beyond the means of those who enjoy those privileges now. How then can we sustain our global economy, our far-flung suburbs, our daily lives? This documentary suggests nothing less than the end of modern civilization, what James Howard Kunstler calls The Long Emergency.

Another piece of dystopian pop culture from my early years, a book by Whitley Strieber and James Kunetka called Nature's End, refers to the last 25 years of the twentieth century as the "joyous sunset." I always found that image to be potent, suggesting as it does the obliviating pleasures of excess and disregard before the night falls.

We soon thereafter got a glimpse of life after those happy years on September 11th. And today our sunsets (in California, at least) are often particularly lovely due to the fires burning throughout the summer. I hope that these images portend only to a momentary fear-mongering that is due a fan of sci-fi such as myself. But a documentary like Crude Awakening calls forth quiet but urgent questions before I head off to sleep.

How long do we have?

Learn More: Here's a preliminary post on Crude Awakening uploaded on November 8, 2007.
Email ThisBlogThis!Share to TwitterShare to FacebookShare to Pinterest
Posted by highway163 at 8:12 AM