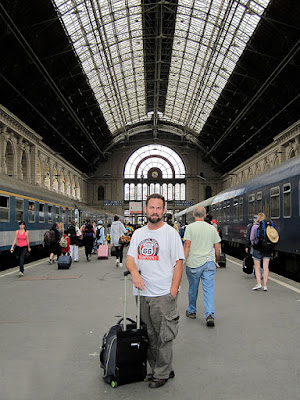 We worked hard for a vacation day, hiking all over Budapest and traveling some distance away from town to further quench my thirst for retro-communism. At Jenny's recommendation we started by climbing the steps to a hill that overlooks the Danube on the Buda side of the river. There we walked at a slow pace, savoring the views and grooving on the quiet of a medieval village that hasn't been turned entirely into a Disney-fied version of itself. For lunch, Jenny sampled some goulash soup while I downed a regrettable slice of pizza. Oh, well. At least there was dessert, a Kürtőskalács pastry horn that tasted like a crunchy doughnut. 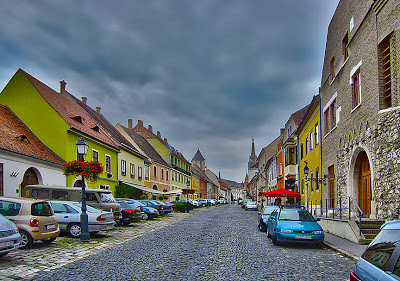 They say the steps downhill are than the uphill climb - harder on the knees at least - but I cheered each clomp toward the river and across Chain Bridge, because blue skies had finally begun to peek through the clouds. For a while we checked out St. Stephen's Basilica, which is perhaps most notable for showcasing the hand of Saint Stephen I who lived more than 1,000 years ago and is viewed by most Hungarians as the father of their country. Jenny found the display a little weird, wondering often afterward just how sure they were that this particular hand belonged to this particular guy. After ten centuries, how could they know for sure? 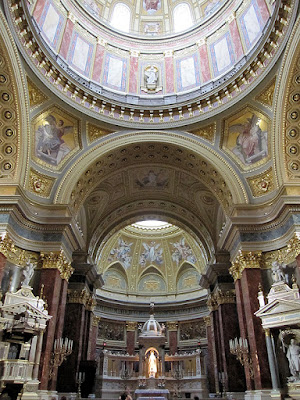 We'd hardly been on the Pest side an hour before I decided that we had to grab a metro back across the river to photograph Budapest's neo-gothic parliament building in glorious afternoon light. Jenny, ever flexible, agreed and we returned to one of Budapest's impressively ancient subway cars for the ride. Topside, looking out over the Danube, I remember another photographer grinning at me as we both studied the departing clouds, waiting for them to slowly spin apart enough to let the sun shine fully upon the building's facade. Once more I recalled William Gibson's words on the subject: "Architectural photography can involve a lot of waiting; the building becomes a kind of sundial, while you wait for a shadow to crawl away from a detail you want, or for the mass and balance of the structure to reveal itself in a certain way." 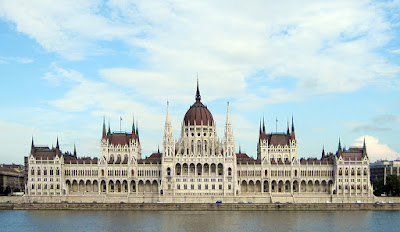 Throughout the day I'd made my peace with the fact that we'd probably not see one place that had attracted me to this town, Memento Park. I'd read that the Park boasts a collection of Soviet-era statues that had been torn down elsewhere and, rather than face demolition, were collected into this place. Our day's organization had precluded use of the tram that occasionally runs well out of town directly to the Park, and I've never been too excited about figuring out local bus systems.

Metros, I can handle. Jenny, however, was feeling adventuresome (and she has the patience to sort through the picayune details), so she spread out the maps and charted a course. We found a tram and, after a few stops in the wrong direction, and alighted at a bus stop heading out of town. Then, after dropping off and picking up passengers every couple minutes, we arrived at Memento Park - two hours after we left the hotel. 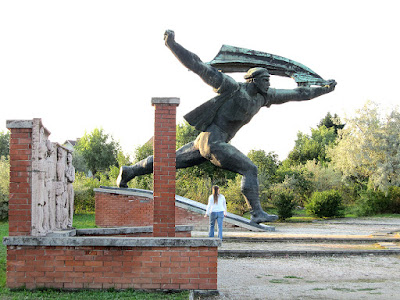 Was it worth it? Well, anything that demands such time had better be worth the hassle. Actually, though the place was smaller than I expected, I was enchanted and saddened with the array of Communist-era art. At Memento Park, a vanguard of the revolution races toward the Worker's Paradise, carrying a flag that streams behind him. Elsewhere, stern but heroic women in bronze stand quiet and forthright, ready to bear any burden to help unleash the utopia that would never come [click here for more images]. The sun was setting, casting long shadows, and we walked slowly. Maybe five or six other tourists were were snapping pictures in the orange light. Just before the office, with its supposedly original memorabilia and goofy souvenirs, I spotted a new acquisition: a relief of soldiers sharing a fraternal handshake. They were lying on the ground, like cheerful corpses, next to an upright statue wrapped in plastic. When it was time to go, Jenny and I sat a while at a lonely bus stop while the sky turned pink. I imagined us waiting for a ride that might never come, far away from the city. But the bus eventually lumbered along and we drove another hour back to the city. 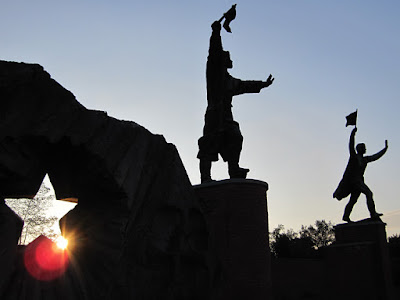 Back in Budapest, Jenny and I walked along the Danube once more, holding hands. Lamp posts cast yellow streaks over the water and we felt like we were inhabiting the kind of romantic movie that our grandparents might have watched. The evening was winding down when I spotted a guy hunched over on the sidewalk, using a spray can to paint a stencil onto the concrete. I'd been searching for spray art in every town we'd visited, but I never thought we'd see someone producing the stuff. I was flummoxed. Should I try to get picture, or should I avoid looking any more like a tourist than I already do? I'd decided to keep moving when Jenny insisted I turn around ("30 seconds later it would have started eating at your craw and you would have insisted we go back anyway!"). She was right, naturally, and I met him and his crew of pals who'd committed to painting fish around town to protest the Danube's declining water life. They were friendly, earnest folks who enjoyed talking about their project and offered me a map for their other spraying locations. I felt silly about my initial anxiety. How scary can anyone be who would spray paint fish onto the pavement?

We wandered a bit some more, searching for a place to grab dinner. Dodging taxis we crossed streets and quiet roads before spotting the glow of the basilica we'd visited earlier that day. Once more Jenny requested a bowl of goulash soup, and once again I opted for a regrettable piece of pizza. Nearby, a drunken group of revelers began belting out four part harmony that attained nearly operatic quality. A comfy bed waited just a few metro stops away. 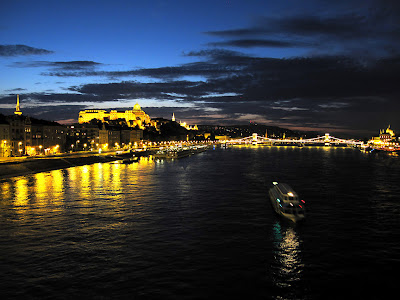 Day 9 | Day 11
Email ThisBlogThis!Share to TwitterShare to FacebookShare to Pinterest
Posted by highway163 at 7:52 PM