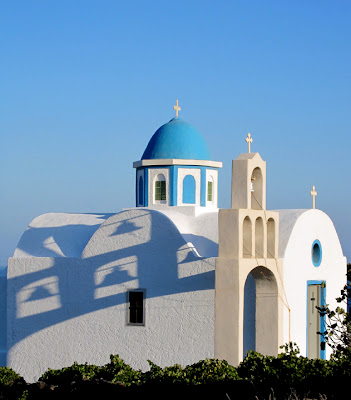 Here’s our advice on the ferry from Athens to Santorini: Don’t. I have the honor of writing about the worst day yet on this trip – hopefully the only bad day. But, it does get better, so hang in there. We were up very early, 5:15, to get onto the 7 a.m. Sea Jet (also called Super Jet) ferry from the Piraeus port in Athens for a five hour ride to Santorini. As soon as I saw how small the boat was, I knew we were not in for a fun trip. Sure enough, we were crammed in like on an airplane. No real freedom of movement and no ability to go outside for fresh air. It was worse than flying - much worse for me, actually. Not long after we got going, the announcement came that bad weather would force us to travel slowly “for our safety and comfort.” I assume it helped our safety, but our comfort wasn’t eased much. The slow speed also added about an hour and a half to our trip. Suffice it to say, we did not enjoy ourselves. Next time, we’ll fly.

We thought our troubles would be over by the time we finally docked at Santorini. Unfortunately, another hurdle presented itself. Our shuttle was nowhere to be found. We looked around, waiting patiently and then not so patiently before digging out the phone number for the hotel. Andy got a pre-paid phone card and tried the number. He couldn’t get the card numbers to work so he asked a local police woman who typed in the numbers with no problem and walked away. That would have been great, except there was no answer at the hotel. Arrggh! After more careful study of the card, Andy tried again and finally got through to our hostess. Unfortunately our lack of Greek and her heavy accent kept him from understanding anything she was saying. So, he came and got me. We called one more time and I was finally able to surmise that I had given her the wrong date for our arrival. After letting her know we really were there and needing a ride, we were promised a shuttle. About 20 minutes later we met her father, who arrived in his tiny car.

Santorini is a beautiful Greek island located southeast of Athens. It’s really part of a volcano. The port side is a series of steep cliffs, while the beach side slopes down more gently. You may wonder how, being on the cliffs side of the island, we managed to climb that steep cliff in a small car. Well, except for Lombard St. in San Francisco, I haven’t seen a windier, more zig-zaggy road anywhere. This little car, along with scooters, trucks, and buses, slowly curved around something like ten switchbacks all the way up that cliff. We were kind of amazed that some locals do this on a regular basis. Finally we were on our way to the hotel, merely ten minutes away.

The hotel, the Caldera Romantica, was quite lovely: small villa-type with traditional décor, a beautiful view of the water, and a great looking bright blue pool in back. It is located in the Akrotiri area of Santorini, which is the less-touristy area. I loved that because it would be quiet, less hectic and more rural. Andy, on the other hand, immediately felt confined, with no transportation to other parts of the island. We planned to be there for three nights and, in fact, intended this time to be a respite from our busy travels. I even reminded Andy of the wonderful few days we spent cooped up on the island in Phuket, Thailand last year, and how he enjoyed just sitting on the beach, taking occasional walks to the little village, and getting to know the folks in the hotel. It was no use. Andy was looking bored already. And then our hostess mentioned the magic word: moto. A moto is basically a scooter or a four-wheel ATV-type vehicle that we could rent for 20 euros a day. I tried to dissuade Andy, but he’d already seen a few motos while we were eating lunch at the little restaurant just up the street, and that was it. We were getting a moto. Really, it turned out to be the best way to see Santorini, so I am glad he pushed us.

Within a half hour, we had our moto. He just needed a bit of practice before I was willing to climb aboard with him. So he strapped on his helmet drove away while I waited with the lady at the rental place. While we waited, I learned that it was her son’s business while she owned the little hotel next door. I learned about the dog that they had tied up: he was a stray that used to hang around the busy road. I learned about how their cats would jump on the tables at the restaurant they owned. I watched her call her daughter and smoke a cigarette. Are you getting the picture? Andy was taking a long time! We kept figuring that he must have stopped to get gas and cash. But this was getting crazy. Part of me knew that he was probably fine, maybe just lost. Part of me was a bit worried, though. And every time I saw a moto driving by, I got a bit more concerned. Finally we saw him coming up the road, safe and sound. Whew!

After a few apologies and final details, we were on the road with our moto. Freedom for Andy and a lot less relaxation for me. But it was worth it. We saw some incredible things that we never would have seen sitting by the pool at our hotel. We basically did what we have been doing in all the other cities, except on a moto. We wandered the streets, seeing what we could see, and trying not to get too lost. Santorini is a small island, at least, so we couldn’t get too lost. There’s just not that many roads. The island is a moon shape – about 2/3rds of a circle. It used to be one big circle with water in the middle, but a giant volcanic eruption blew a chunk of the island away. From one end of the moon-shape to the other is about 25 km. We were surprised at how little time it took to get from one place to another. 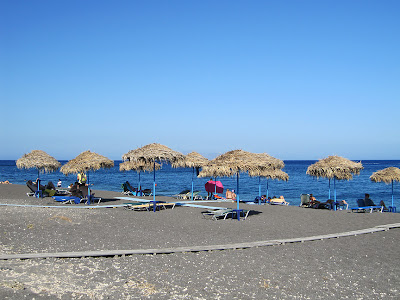 We went to a couple of small towns, including Pyrgos. These towns are all built on hills and the buildings are mostly those gorgeous white with blue trim structures you see in the pictures (though there are other colors as well). The style is all the same though: straight walls with arched roofs and staircases outside. You could tell that even the buildings under construction were this same style. Since they are all on a hill, there is a point where you can’t really drive through them any longer, so the roads for cars stop and you have to park and walk further into the city through long, narrow corridors. It’s quite lovely and quaint. It’s hard to tell homes from businesses. Churches are easy to spot, though. They almost all have domes – usually blue – and/or a bell tower. In the right light, these are the most stunning buildings, complimenting the blue sky and water perfectly. You really can’t describe the beauty in words, which is why we took lots of pictures!

We got back on our moto and wound around the roads more. The rushing wind was thrilling, and a little scary (even though we stayed at about 50 mph). We made it to a beach on the other side of the island and saw lots of small towns along the way. We also saw lots of cats, pretty much everywhere we went. Most were wary, but a few allowed us to pet them. We also saw donkeys just milling about on the plains. Everything about Santorini was charming. 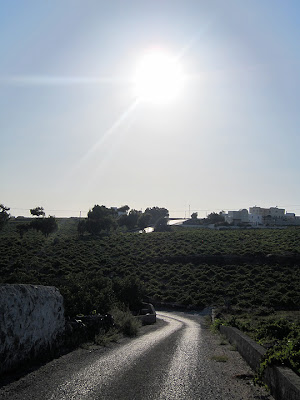 As the sun started to get low in the sky we headed back to the quiet part of the island, just to check our bearings. Passing our hotel, we agreed that it was time for dinner. Up the road a bit we found a fish place that promised a lovely sunset view. Though Andy and I aren’t really fish eaters, especially when we don’t know anything about the fish being served, we gave it a try. It turned out not to be the best idea. I’m sure the food was good, but it was too rich for our systems. I’d never had Greek fried cheese before and I doubt I will again. It’s pretty much what you’d expect. We also had tzatziki, which is great, and eggplant salad and sour cheese dips. No pita, though.

And, because it was so windy, they kept the translucent plastic shades drawn, so you couldn’t really see the sunset. Oh, well. We boxed what we couldn’t eat and returned to the road. It was dark, which made us a bit nervous, so we took it very slow. Luckily our hotel was just a few minutes away. We got into our room and headed off to sleep, ready for more moto adventures. We plan to get all the way to the other end of the island tomorrow, seeing lots more along the way.


Day 12 | Day 14
Email ThisBlogThis!Share to TwitterShare to FacebookShare to Pinterest
Posted by highway163 at 11:41 AM