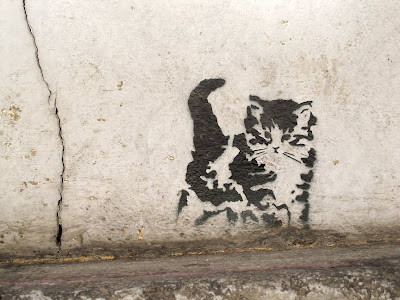 I'm gonna wrap up my blog-series of Innsbruck [Here's Part 1 and Part 2], Austria street art with a potpourri of images that, while lacking a common theme, reflect some of my own aesthetic sensibilities (which admittedly verge toward the absurd). Consider this stenciled kitty playing near the cracks of a sidewalk. Who put it here, and why? Is there a message, or does it simply project the pleasure of placing a soft, cuddly animal in a gritty urban setting? As far as I can tell, much of this stuff seeks to inspire opened-ended questions like these (though beer and boredom no doubt play a role). 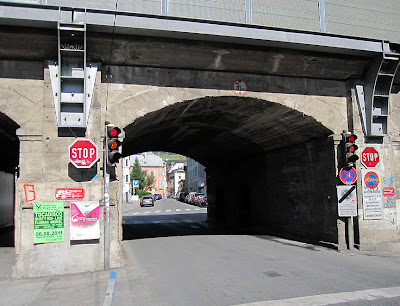 I'm no tough guy, and I don't purposely plunge into places where I'm not wanted. At the same time, any seasoned street-art hunter knows that you've sometimes got to skulk along some decidedly unfriendly districts to find stuff that matters. There is, after all, a palpable sense of disenfranchisement that motivates a sprayer's choice to seize property in this manner. That's why I found myself walking alongside an elevated train track while visiting Innsbruck one quiet Sunday morning. All that dismal stone stretching underneath: prime territory for tags, stencils, and the occasionally goofy juxtaposition of a sexually charged advertisement amid a dank enclosure. 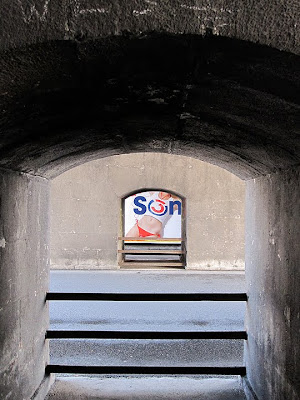 Stenciling is the art of repetition, of course. Thus I can rarely travel long during one of my street art searches without spying some version of Banksy's Flower Thrower. This guy is everywhere, an ever-present sign of peaceful revolt transformed into a sort of stuttering shorthand of hip fashion - kind of like those Che portraits you see on t-shirts and the walls of college dorms. That's why I had to smile when I spotted a miniature version sprayed underneath an imposing sign of Innsbruck culture [my rusty Google-Fu translates the plaque into a commemoration for a male choir]. Something about the contest of size and the comparative simplicity of the illegal icon speaks to me.

Let me conclude my Innsbruck series with another motif that captures my attention: spray can mockery of video cameras. These devices are, as you'd imagine, increasingly ubiquitous, constant reminders of our post 9/11 surveillance society. They also signify the inescapable feeling that all public property is somehow privatized. That's one message that many of today's stencil-slingers send, that our shared commons have been supplanted by a simulacrum of public life, a fake agora. These spaces, seemingly open, are closed off to folks who cannot consume them properly; they must be protected against those who would contest their faceless authors. The videocamera is the sleepless sentinel who earns rebuke from the masked tagger. As ever, though, the question remains: does defacing a place reveal anything useful? Or does it merely substitute one injustice for another? 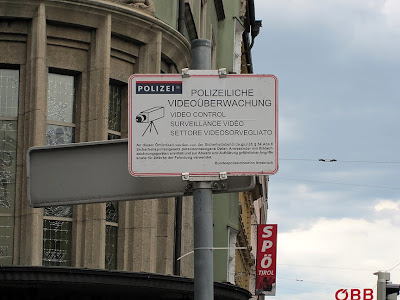 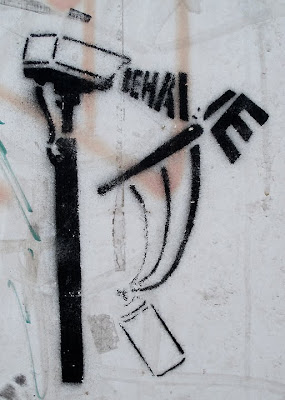 Email ThisBlogThis!Share to TwitterShare to FacebookShare to Pinterest
Posted by Andrew Wood at 4:55 PM