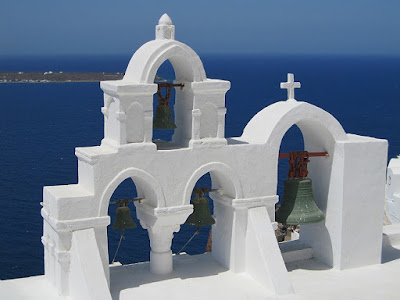 Our last hours in Santorini, and the launch of another travel day: a reminder that if you like to sit in airports, wait for cabs, and deal with paperwork then you too can tolerate a three-week tour of Europe. As I packed up my bag again, I remembered all the times my friends warned that so many transfers would rob our travels of their fun and spontaneity. It's a fair point. Yet Jenny and I often prefer our trips in sampler-size portions. Just enough to get a taste. And by this point we'd gotten pretty adept and organizing and moving our lives from country to country. If only all the folks with whom we had to interact were as professional.

Starting with a taxi driver who charged us a ruinous rate, we entered the world of Santorini Airport with low expectations. Security was eerily lax as clumps of people piled into the same tiny terminal. The flight departing before ours was delayed for some reason, which meant that seats became fiercely guarded commodities. Then when our plane was ready to board, the previous flight was also opened. Thus we were several hundred sweaty passengers squeezing through three narrow doors, getting our tickets ripped hurriedly by benumbed attendants. Queuing, as you may have heard, is a little-known custom in this part of the world. You put your feet where you can, expecting that friendly but determined folks will edge their ways ahead of you from all sides.

Prior to boarding, I was at least able to steel a few moments of relative peace on a rooftop garden. Typing these notes, I grinned at sight of a black and white kitten sauntering from table to table, enjoying the attention of everyone sitting nearby. Some people were heading for Athens. Less fortunate souls were stuck in a holding pattern before they could depart for Zurich. Our destination marked our final sweep southward from Greece to Italy and on to France. Next stop: Milan. 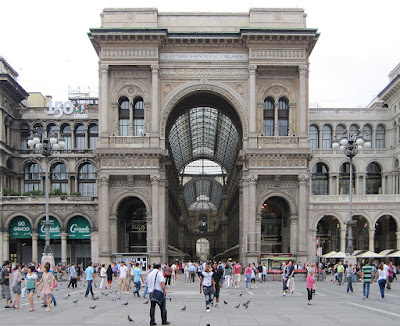 The flight was our last visit to Easy Jet's jaunty jumble of crazed queuing, cramped seating, and a la cart prices for everything. We arrived in Italy to, Oh, Lord, big fat raindrops. I reminded myself that we'd enjoyed days of perfect sun in Greece. Dreading the realities of Italian driving, I approached the rental agent in a most unnatural state: seeking that rip-off extra insurance that I routinely eschew. You can imagine my surprise when she seemed nearly as adamant that I need not incur the expense. Italian law requires that all rental agreements include some basic insurance, and the company we used had scored an especially sweet deal on deductibles. So we took our tiny Fiat (a "fashionable" model, the agent assured us) and set for the Autostrada south.

Driving in Italy. Where to begin? First, it's important to remember that cops have the power to demand cash from international motorists when they hand out traffic tickets (yep, they'll follow you to the nearest ATM if you can't pay up). So speeding is a bad idea. Then you add the fact that even large cities seem more designed for pedestrian traffic than for cars. OK, that makes sense, given that you're dealing with more than some mighty ancient cities. Still, it's a scary thing to navigate a place like Milan when streets are rarely signed, (supposedly traffic-smoothing) roundabouts come equipped with jarring stoplights, and busy roads magically transform into cobblestone walkways or one-way alleys.

Strangely enough, for all the disorder of Italian city driving, I've never driven a highway with more warning signs: heads-up notices that - news flash! - traffic means excess cars, curves can bring curvy conditions, fire in a tunnel is dangerous (the iconic advice: some poor sap running away from flames). Then, if there isn't anything to warn about, traffic safety engineers post signs of red exclamation points every few kilometers, just in case. It's as if the Italian highway system was designed by your mother. 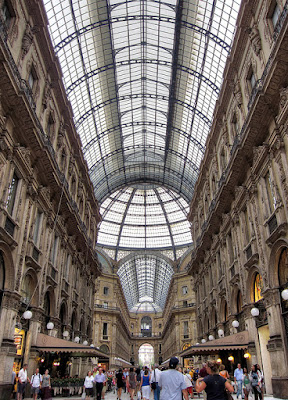 Best of all, despite all our maps and all our planning, we got lost in every major stop. We got lost in Milan as we searched for the Galleria Vittorio Emanuele II, and later when we tried to return to the Autostrada. And we got lost in Florence as we tried to find our hotel (this time aided by a new map we bought for the purpose). We found that we could neither park near our hotel or hope to speak with someone at a reception desk, because the roads had been turned into a pedestrian walkway and the desk was closed for the evening. When I found a nearby hotel that, according to the tiny fine print of our contract, would provide keys to our room, I was then informed that we needed a guy to pick up our car (sure, it's just a few blocks away, but the spaghetti of one-way roads and pedestrian sidewalks would make the trip a nightmare, I was promised). Oh, and the key-man would be around in an hour. At last we negotiated a better plan, and Jenny and I finally turned the key to our door at the Palazzo Ruspoli.

The room was beautiful, with high ceilings and flowing drapes. Across the street was the Duomo di Firenze. As exhausted as we were, Jenny and I simply had to enjoy some of this pedestrian paradise before collapsing into bed. Around the Duomo, kids were lounging on the steps, drinking, laughing, and playing music. Gelaterias were doing brisk business (somewhere in the Italian constitution, there must be a requirement that no one shall be forced to walk more than a hundred meters to a get some gelato). And our moods lightened. I had to admit: While Florence is a nightmare for motorists, it's pretty cool for walkers. 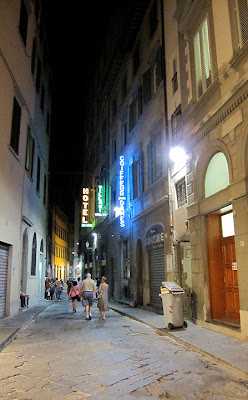 Day 15 | Day 17
Email ThisBlogThis!Share to TwitterShare to FacebookShare to Pinterest
Posted by highway163 at 10:10 AM