August 9 - Florence to Pisa to Genoa (written by Andy) 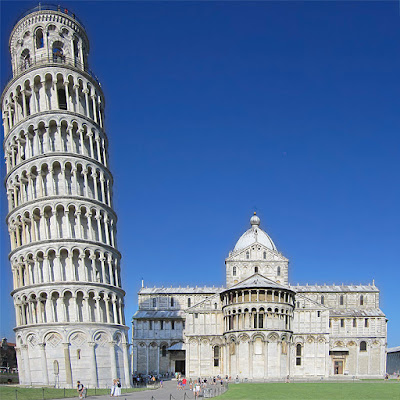 Jenny and I have compared our writing assignments, and I'm sure that she got the better deal. She got to write about a lovely day in Florence yesterday. I'm stick with the soul-crushing struggle to navigate our way to a Hertz office in downtown Genoa today. Things started off nicely enough. The guy delivering our car even arrived early. Jenny had devoted lots of time to our maps and navigated us out of Florence like a pro. Even some of the weirdness of Italian driving could be viewed in a happier light. I came to love how pretty much every time you're in a lane that splits from the Autostrada, that very same lane also continues onward (unlike in the States when a lane frequently disappears, requiring that you merge). I also dug how every tunnel -- and there are countless tunnels boring through this mountainous part of Italy -- has a name. Best of all, we were heading for Pisa where surely every road would offer signs pointing to a certain Leaning Tower. 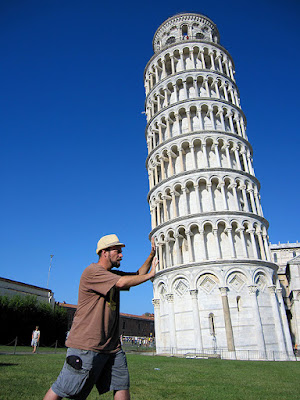 Yet once more we got lost, discovering that Pisa is a fairly large town with much, much more to offer than the typical tourist photos would suggest. Still, we were there to see the Tower, take our snaps, grab our trinkets, and get back on the road. Our rental agreement demanded that we drop off our Fiat by 2 p.m. So with some stress and hassle we rode through town in search of that danged tower. Eventually we managed to find a reasonably cheap lot merely a few blocks away from our destination in Pisa. About an hour later we'd gotten our kicks. 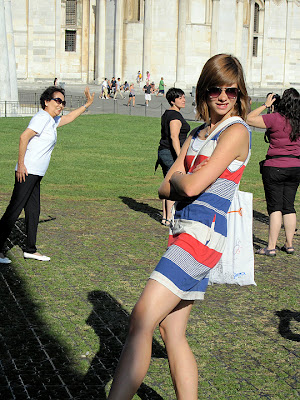 Everyone there seemed to be focused on the same idea: using the power of forced perspective to produce pictures of people appearing to hold the tower up (or push it over). You couldn't walk more than a couple feet without getting into someone's frame, but the crowd was relaxed and patient. We arrived relatively early, just as the vendors were setting up their boxes and racks of paraphernalia. You could buy shirts, hats, pins, buttons, miniatures, and dozens of other pieces of Pisa. We know that the city offers so much more. Yet there we were, barely an hour later, cruising north. 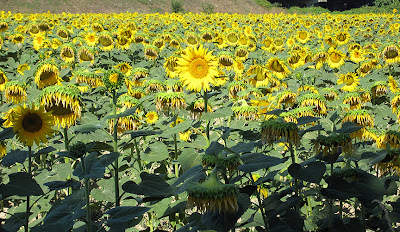 Jenny and I had hoped for a few hours of leisurely driving through Tuscany before arriving in Genoa. The weather was lovely, and the sunflowers were gorgeous. But the local roads demanded slower speed limits than our schedule could allow, and we'd erred in accepting a rental agreement that required us to arrive in the early afternoon. Now normally when arriving somewhere new under a deadline situation we'd simply study maps of the area and plan a surefire route. Italy doesn't work that way, though. Despite having pages of Google Maps print-offs, our adventures in Milan and Florence had convinced us that no planned navigation of Italian streets survives first contact. Jenny was not pleased with my call, but I determined that we had to stick with the Autostrada if we had any chance of arriving on time, especially since our maps provided us no clue of just how complex those local roads could be. Maybe it was our growing exhaustion over European travel, perhaps we just weren't thinking clearly, but we simply couldn't align our plans with the realities of those streets. 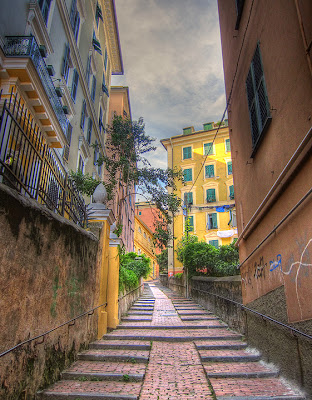 Extra cushion timed melted away as we abandoned the niceties of our arrival (along with our positive attitudes). It became a race against the clock to beat traffic and our frustration to pull into the rental lot by 2. Even a last minute fill-up became a dramatic crisis as we couldn't figure out the damned pump or even remember how to properly close the gas cap of rental. Naturally the machine wouldn't take our credit card, and we'd run out of Euros. Really, it was like a bad movie. Worse yet, the happy ending -- turning the car over with five minutes to spare -- offered no respite. Jenny and I barely talked on the cab ride to our hotel. The marble floors and luxury bath in our surprisingly upscale room meant nothing to us. We'd spent more than two weeks together, laughing, adventuring, negotiating, and tolerating, but it was clear that dozens of tiny slights and momentary lapses in courtesy had taken their toll. 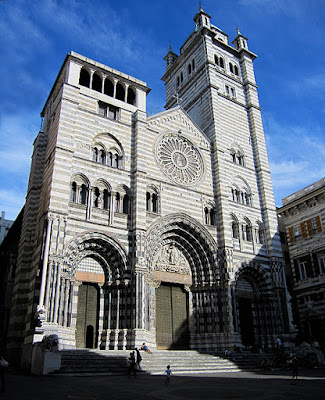 We therefore spent a couple hours resting and talking, apologizing to each other for our shared failures in planning and attitude. We also agreed that we'd think long and hard before renting a car in Italy again. Afterward we rummaged around town, climbing hills that reminded us of San Francisco and tucking into meals at a mellow outdoor table. We found a city seemingly filled with fountains and grottos and funky narrow walkways. Spray-art was nearly ubiquitous, testing Jenny's patience as I had to snap pictures of nearly every example. We walked and chatted and gradually fell back into a happy vibe. I can't say that we got to know Genoa especially well. But Jenny and I were back on the same team. Tomorrow we'll board a train to France, grateful for the simplicity of this form of travel as compared to what we'd endured over the past couple days, and begin the final leg of our European tour.

Day 17 | Day 19
Email ThisBlogThis!Share to TwitterShare to FacebookShare to Pinterest
Posted by highway163 at 10:10 AM