Our last day. We'd been planning this trip for years. Saving for it that long too. Seriously, we've had fights that seemed vicious enough to inspire divorce peter out after one of us would mention the Europe trip. How could we split when we had this trip in our future! We'd spent the last year in serious prep-mode, arranging and rearranging details in the hopes of producing this thing. We envisioned that decades from now we'd recall our European Grand Tour and share memories… climbing the acropolis, sailing among Greek islands, strolling along the Seine. We'd done it, and it was all wonderful. And now it was almost over. 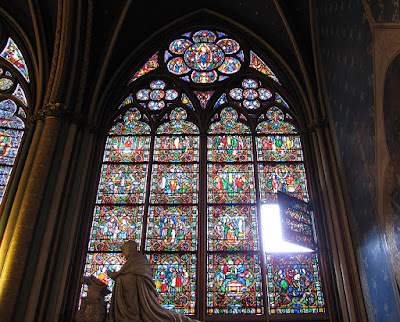 So we launched ourselves into the day, taking the metro to Notre Dame Cathedral and anticipating a nightmare to get in. Actually, though lines began forming early in the morning, we had no problem finding our way inside. As usual, folks ignored the no photography signs and lit the place up with flashes (I had to take a couple shots too; sue me). Strangely enough, a wedding rehearsal was underway, which meant that our tour was augmented by celebratory music and priestly intonations. I hope the bride and groom enjoyed the extra attention. 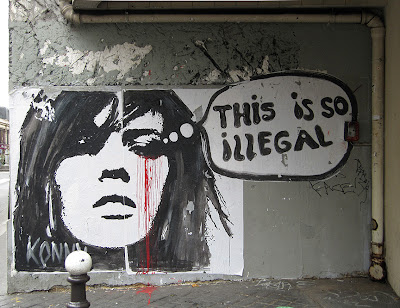 Walking back across the Seine I searched out pieces of spray art, glad to finally find some of the stuff in Paris. We had no formal plans until our evening's encounter with the Moulin Rouge, allowing us to follow instinct from place to place. Gradually I noticed that the concentrations of graffiti and other street art had begun to thicken. Before long I realized that we were near Centre Pompidou and its world-renowned collection of modern and contemporary art. Ever the kind soul, Jenny consented to adding a stop and we used our Paris Pass to score free tickets. Riding the escalators up the facade of that crazily postmodern edifice that resembled a factory turned inside out by a malfunctioning transporter, we noticed clanking, crunching sounds augmented by droning chants. Later we'd learn that the auditory assault was a piece by Mickey Hart called "Soundwalk." 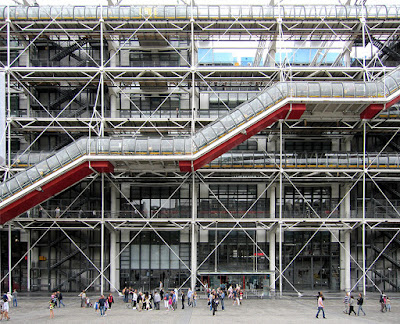 The displays were predictably mind-bending, conveying a sense that anything can be art -- even the guards who sat forlornly in their street clothes. A tangled mess of metal strewn about a floor: Art? Definitely. A cluster of people staring at a canvas of Yves Klein's IKB: Art? Surely. An empty wall, devoid of installation or explanation: Art? Maybe. Jenny was less thrilled with stuff that seemed defined more by various "artist's statements" and critical responses than recognizable aesthetic pleasure. I was pretty impressed, though. Lots of Kandinsky and a respectable array of Picasso, along with the requisite Andy Warhol. Even one of Duchamp's urinals. We even spotted a photograph of the UK Pavilion from the 2010 World's Fair. Even after seeing this thing personally I only now recognized a human face in the interior design. Amazing. 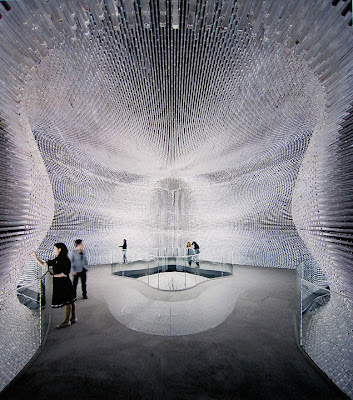 Jenny was done with museums, though, so I promised that we'd focus the afternoon on anything she wanted to do. She opted for Montmartre, so we caught the nearest metro heading that direction. On the other side of our ride, drop big fat raindrops began to fall, just as I remembered our decision to leave the umbrellas behind. We ducked into a souvenir shop and bought a cheap one. Minutes later, the rain cleared and we knew, we knew that we'd get no more precipitation that day. We climbed the steep hill toward the Basilica of the Sacré Cœur and searched for an ideal view to take in our last panorama of Paris. We toured the church long enough to count the excursion as vaguely "cultural" before diving into the tacky theme park extravagance of Montmartre. Creperies, painters, and busloads of tourists. Oh, and a mime. At last we saw a mime in Paris. We watched; we couldn't not watch him. And when he started texting on his mobile phone during a break, we had to giggle. 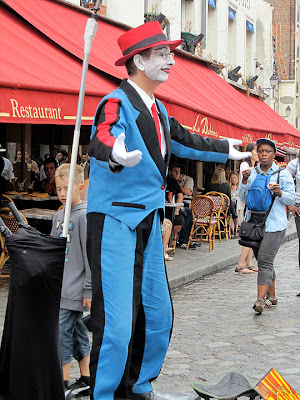 We had a couple hours before our planned arrival at the Moulin Rouge that evening, so we oozed along with the crowds for a while and then sat off alone to the (relatively) nearby Sacre-Coeur Cemetery. Once more, we had no specific plans. But we recognized a couple names on the handy map available at the office and searched out their plots. Actually Émile Zola had recently been moved to the Panthéon, where France commemorates its cultural heroes, but François Truffaut was still there, with a flower pot of metro tickets. I loved Truffaut first in Close Encounters of the Third Kind, years before I ever saw The 400 Blows. [I still haven't see The Last Metro.] 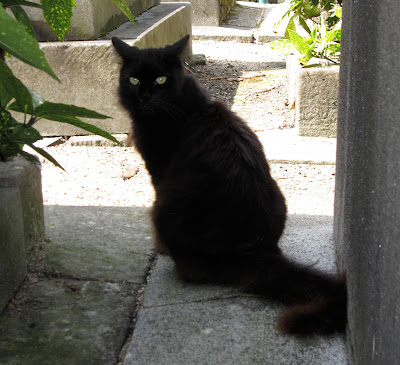 We followed a random course among the monuments, playing hide and seek with a black cat that had crossed our path, and then we headed back to the hotel. Just one last item on the itinerary to go. This one was, I suppose, mostly for Jenny. Yet I was the one who insisted that we pay the crazy-expensive price for tickets. The Moulin Rouge is pretty much the most famous cabaret in the world, though it offers almost nothing to remind you of Toulouse-Lautrec or that movie that Jenny loves so much. Instead you get dudes in tuxes offering obsequious welcomes, get-to-know-your-neighbor tight seating, and vigilant checks against anyone who'd dare to use a camera inside. 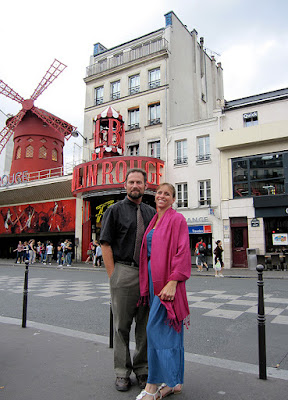 You also get one hell of a show after dinner. I couldn't begin to tell you what actually happened in the performance. But I remember lots of glimpses. There was a nearly naked babe thrashing about in a water tank filled with snakes. There were topless cancan dancers. There was a talking dog (really). It was obnoxiously entertaining. Relentlessly tacky. Exhaustingly fun. And when a tiny wisp of feather floating down from one of the dancer's outfits, I caught it for Jenny. I knew she'd want it.


We stumbled out of the theater (well, I stumbled, actually, after drinking the full bottle of champagne that came with our meals - and finishing the bottle inexplicably left by one of our neighbors) and entered the metro for one last ride. Three weeks of airplanes, trains, boats, cars, and an ATV had led to this: a final trip to our hotel where we would pack our bags and head home. We had an insanely early airport shuttle scheduled the next morning, yet we insisted on watching the Eiffel Tower from our room at 1 a.m. On schedule, those glittering lights fluttered with kinetic exuberance. I sought some sort of descriptive language but could only think of fireflies in an invisible jar. Five minutes or so clicked by as we celebrated that last moment together, embracing each other and Paris too. The time passed and then, as we knew it would, the Tower blinked off for the night. 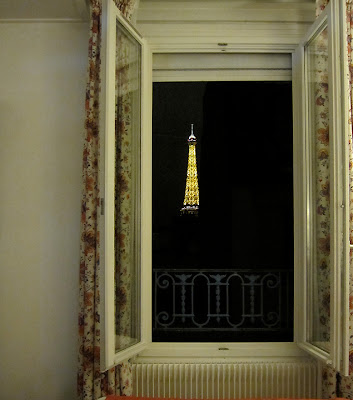 Day 21 | Return to Start
Email ThisBlogThis!Share to TwitterShare to FacebookShare to Pinterest
Posted by highway163 at 11:59 PM