You may have noticed that Woodland Shoppers Paradise has not featured a new entry in many days, and that my posts have been relatively spotty this semester. And you, my friend, would be right! With two documentaries, seven new lectures (on topics ranging from Olaudah Equiano to Dream of the Red Chamber), a new grad course prep (a highlight of my year, actually), a student trip to Beijing to coordinate, a couple NCA essays to write, and all sorts of other work to complete, I've had to hold off on blogging these past few weeks.

Comparing the 2011 workload to previous years - and I'm remembering back when I was completing my dissertation - this is the most demanding year I've ever had. Yeah, I'm complaining a bit. But I'm counting my blessings too. I've got a job, some friends, and a family who loves me (or at least tolerates me). And I'm writing some pretty fun stuff [Yeah, I still write every day, just not on the blog!]. Moreover, I look around and I see the same shellshocked look in the faces of others. Folks on the bus, students in the hall, people queuing at the market. Lots of people are stressed and tired. At least I'm not alone! [Plus, I do have that sabbatical to anticipate, so, really, I can't complain.]

I estimate that I'll resurface sometime after Thanksgiving the new year. And I still plan to complete my blog posts for the previous China and Europe trips. Soon!
Email ThisBlogThis!Share to TwitterShare to FacebookShare to Pinterest
Posted by highway163 at 10:15 AM 0 comments

Drudge plucked another doom and gloom article from the Financial Times to highlight the depths of despair that is our due for having the audacity to hope that President Obama was the real deal. Generally I ignore these red flags, especially since the American Right appears to be dead set on taking Obama down. Even so, Gideon Rachman's essay makes the depressingly credible argument that our nation will inevitably be required to seed dominance to China, adding, "Those who refuse to entertain any discussion of decline actually risk accelerating the process." No matter who wins the 2012 elections, we all should prepare to lose our "We're Number One" attitude.

The article offers a reasonable enough parallel between our decline and that of Great Britain after the Second World War, adding, however, that our approaches toward also-ran status couldn't be more distinct. While Britain faced the loss of empire with a certain magnanimity, the U.S. is far too invested in its "American Exceptionalism" identity to recognize the passing of power. Some among us, for instance, respond to the Rising China thesis with a smug reminder of our 1980s near-capitulation to Rising Japan. It's a fair point. Remember when Japan Inc was buying America from under our feet? Doesn't it seem strange to recall? I mean, really, when's the last time you heard someone say that we all must learn Japanese to stay competitive?

Still, as Rachman rightly points out, China's got tough numbers to beat. They're awash in money, they've got an increasingly potent military force, and they've got workers, workers, workers. They face their share of structural and fiscal problems too. We mustn't forget that. And all of us, the U.S., the Europeans, the Chinese - the whole world - we all confront an economic contagion that threatens to make the 2008 crisis seem positively healthy in comparison. The Occupy Wall Street protestors, for all their goofy eclecticism, seem to know this better than most. Something has deflated in the American psyche. A privileged few will ensure the continuation of their personal pleasures. The rest of us will pay the price. China is part of that new future. But they are hardly its author.

Read the piece: America must manage its decline
Email ThisBlogThis!Share to TwitterShare to FacebookShare to Pinterest
Posted by highway163 at 5:33 AM 0 comments

I'm presenting an Honors Humanities lecture on the U.S. Constitution tomorrow and, for no particular reason, I've committed to memorizing the Preamble. As most of my pals know, memory is one of my weakest public speaking skills. Indeed, I spent a couple hours on a recent evening working through various mnemonic techniques - just to wrap my brain around that danged Fifth Amendment [so many "nors"!]. So far, the classic approach seems to work best for me: storing bits of information in "places" that form a logical narrative. Still, for those folks who are more musically inclined, there is at least one other way to learn that danged Preamble…

Email ThisBlogThis!Share to TwitterShare to FacebookShare to Pinterest
Posted by highway163 at 10:16 AM 2 comments

Here's some more goofily arresting Florence street art. Missed yesterday's helping? It's only one click away. 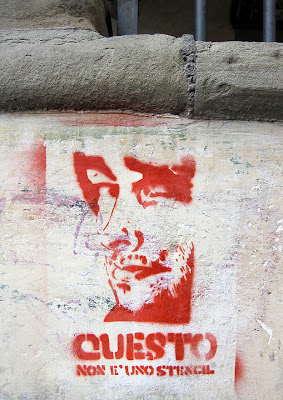 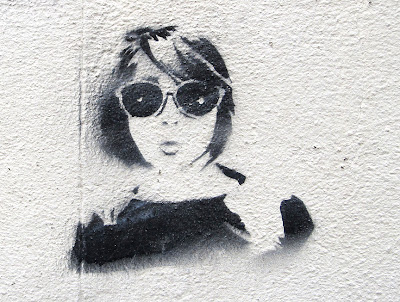 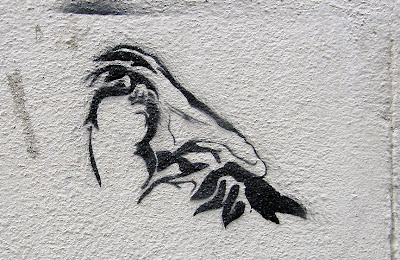 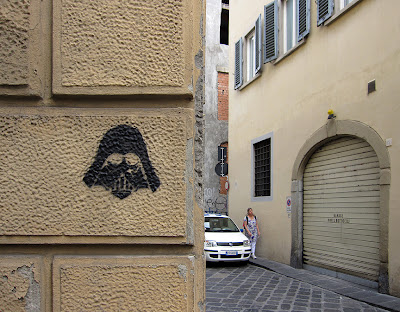 Email ThisBlogThis!Share to TwitterShare to FacebookShare to Pinterest
Posted by highway163 at 8:50 AM 0 comments

It's time once more to share some street art from our recent European travels. Our destination? Florence, Italy - and reminder that economic and social pressures are bringing this place to the boiling point. 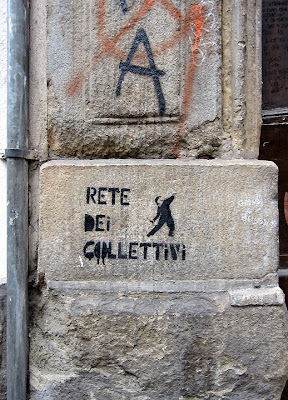 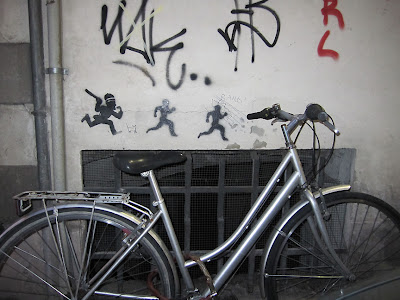 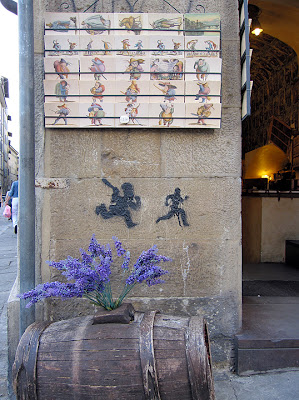 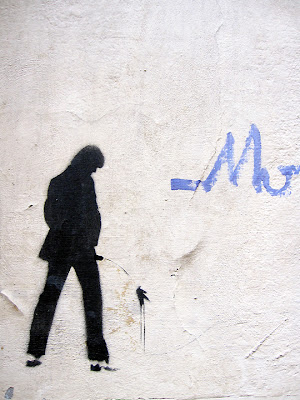 [Part 2 of 2]
Email ThisBlogThis!Share to TwitterShare to FacebookShare to Pinterest
Posted by highway163 at 8:47 AM 0 comments 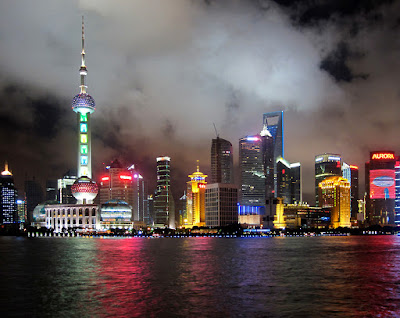 If you want to see a picture of the 21st century, stand along the Shanghai Bund and stare across the Huangpu River. A brash panorama of jaunting skyscrapers that somehow resemble children’s toys, Shanghai’s Pudong district is a remarkable vision of things to come. I’d come here before, back in 2010, to attend the Shanghai World’s Fair. Back then, I was traveling with my wife, enjoying the pleasures of spontaneous decisions to ramble and explore wherever our instincts led. The 2011 GTI study tour was much more complex, but no less fulfilling.

The ostensive purpose of my visit this year was to gather footage for a documentary about the Global Technology Initiative. Yet I also served as co-leader, along with Richard Chung, helping ensure that 23 undergraduate students could get to know China personally, safely, and meaningfully. I may have thought I’d be focusing solely on a video project, but there was no way I would focus on my camera viewfinder alone. There was just too much to see and do in Beijing, Shanghai, Hangzhou, Taipei, and other destinations on our itinerary. Averaging about four hours of sleep a night, I sometimes felt like I would age a year from this trip, but I look back on GTI 2011 as well worth the sweat, hassle, and occasional unexpected adventure.

Traveling with so many people, I felt a special understanding for Beijing traffic. I remember vividly the dense and complex roads of China’s capital city. But it’s one thing to read about the effects of automobiles on a strained grid where bicycles once held sway. It’s something else entirely to join the crowd. I can think of few other venues to encounter contemporary China's post-Revolutionary "Get moving – but not too fast" spirit than a Beijing traffic jam. 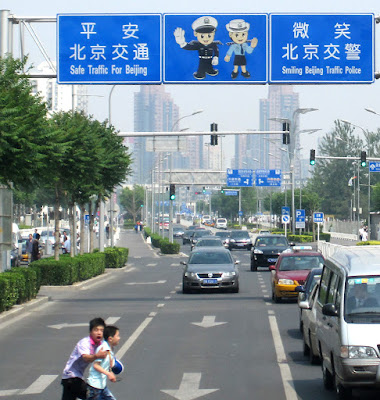 I also remember walking the streets of Shanghai with GTI students, experiencing anew the bumpy realities of a nation where so many people are charting new courses without maps. One night we were heading for the subway, passing through some of Nanjing Road's funkier side streets. It seemed that we were constantly split across three intersections. Eventually we agreed on a "sticky rice" strategy to stay together. We wanted to catch that last train.

We rushed to beat the closing door and, before long, were exiting somewhere near our hotel. Problem was, the building’s marquee was lost among the clouds. A guy on a motorcycle pointed at a narrow alley nearby offered his advice, and we plunged into a neon-lit corridor of mahjong games, hair salons, and all-night veggie shops, producing our own jagged map of awkward turns and confident strides. Once we arrived at our hotel, I remember the smiles of students who loved our adventure of urban wandering. “Let’s do that again!”

That’s my vision of China too. The nation’s urban planners are building stunning vistas and awesome panoramas. Our students saw some of the blueprints and chatted with those visionary engineers of the 21st century. GTI participants grew from the visit, and so did I. Yet my favorite moments were closer to the ground, grinding through Beijing traffic and wandering Shanghai’s crowded streets at night. Sometimes we got lost, and sometimes we were unsure. But we were always ready for the surprises awaiting us. I can’t wait to go back. 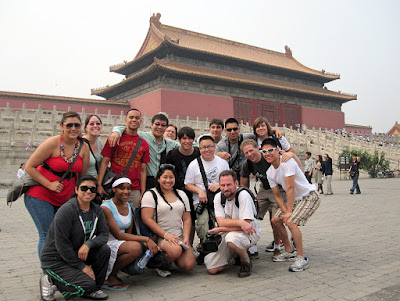 (Photographs by Andrew Wood)
Email ThisBlogThis!Share to TwitterShare to FacebookShare to Pinterest
Posted by highway163 at 11:18 AM 0 comments