I know this is ancient in internet-time, a Buzzfeed story from way back in February, but every time I see this piece about the combined efforts of a street artist and a wall cleaner who end up co-producing this clever narrative, I have to smile.

Check it out: A Graffiti Artist And An Unwilling City Painter Tell A Short Story:

http://www.buzzfeed.com/seancurry1/a-graffiti-artist-and-an-unwilling-city-worker-tell-a-short
Email ThisBlogThis!Share to TwitterShare to FacebookShare to Pinterest
Posted by highway163 at 6:32 AM 0 comments

I Forgot My Phone

In his book Outside Lies Magic, John Stilgoe notes that many folks growing up in 19th century-America cultivated greater visual acuity than we do today. They actually developed and practiced the art of looking, discerning hues and shades both for the pleasure of aesthetic refinement and for the practicalities of daily life. Stilgoe offers a largely class-bound analysis, summoning notions of chromatics lectures offered during an afternoon tea. Yet he also calls forth images of farmers and drovers who read the clouds with wary appraisal, searching for storm-sign.

In our more media-saturated age, we seldom attune ourselves to the nuances of nature, choosing instead to distill the world into a stock of abstractions. We might adjust our flatscreen controls to "vivid" and crank the volume to "11," but only because our expectations overwhelm the subtle gradations of things. Presence, the experience of "being there," is harder and harder to recognize, or eventually to miss.

Charlene deGuzman knows something about this. Her video expresses the frustration I have felt in gatherings large and small when friends edit our interactions to check messages, to post comments, or maybe just to find something more interesting than the conversations that bind us. Of course I found myself doing the very same thing last night at home with my family, checking my phone while my daughter was sharing the news of her week. I stopped; I don't know if she noticed.

Email ThisBlogThis!Share to TwitterShare to FacebookShare to Pinterest
Posted by highway163 at 7:32 AM 0 comments

In his Business Week essay "The Seductive Allure of the Hotel Bar," Geoff Dyer offers a useful distinction between a hotel bar and a bar bar. The latter is prototyped by one's neighborhood hangout, a locale possessing a unique time, place, and character. The hotel bar, in contrast, offers omnitopian qualities that warrant a certain degree of appreciation. After all, "the essence of the hotel bar is that it doesn’t matter which one you are in -- or where."

Initially Dyer notes that the hotel bar functions as an enclave, one that may offer a commanding view of the city one never comes to know, or at least a bunker to protect a similar brand of indifference. Thereafter he describes the appeal of the hotel bar's ephemerality: "The clientele of the hotel bar is transitory. But everyone likes to feel at home in a city they are visiting, so the hotel bar becomes their local for a couple of nights."

To this free-zone drift strangers, Dyer explains, folks more open to peak experiences because they are far from home yet near their rooms. The essay concludes with commentary on the hotel bar's gift of anonymity and concomitant potential of romantic intrigue, a pleasure difficult to find in a place "where everybody knows your name."

My favorite part of this piece is Dyer's account of the hotel bar's freedom from local restrictions (particularly those in the United Kingdom):


"In the late 1970s, I experienced the full oppressive weight of the licensing laws: the dread certainty that however good a time you were having it had to come to an end at 11:00 prompt—unless you were a guest in a hotel. This gave hotel bars, even those in England, the exotic attraction of abroad. To drink in a hotel bar was to be permitted to live like an outlaw, to be granted immunity. A hotel bar was a place from which you could not be extradited and sent back to the restricted world of pub opening hours… If pub life is defined by the hated call of 'Time,' hotel bars are places where there is no time."

This piece, certainly not intended as an exegesis on a scholarly conceit like omnitopia, nonetheless serves up an example of the kind of prose that I'd like to practice more often.

Read the essay: The Seductive Allure of the Hotel Bar: http://buswk.co/17J17VF
Email ThisBlogThis!Share to TwitterShare to FacebookShare to Pinterest
Posted by highway163 at 7:55 AM 0 comments


Thanks to David Goldman for telling me about GE's "Datalandia" campaign. It's a series of short videos that mash up cheesy pop culture references (vampires, X-Files, and even CE3K) to get tech-friendly hipsters talking about the Internet of Things. Best of all, many scenes were shot at Hamburg, Germany's Miniatur Wunderland.

• brandchannel: "GE hopes to simplify the complex topic so consumers and users alike can start to realize the benefits that big data can have on everyday life."

• Ad Age: "'What if there was a little town that had the industrial internet and they were using it every day to keep the town folks happy, healthy and productive?' asked Tommy Means, founder and creative director at Mekanism, the creative agency behind the campaign."
Email ThisBlogThis!Share to TwitterShare to FacebookShare to Pinterest
Posted by highway163 at 7:48 AM 0 comments

Gunther's Ice Cream Shop boasts some super swell neon!
Email ThisBlogThis!Share to TwitterShare to FacebookShare to Pinterest
Posted by highway163 at 10:37 AM 0 comments

Bauhaus-Universität Weimar doctoral candidate Paula Marie Hildebrandt and performance artist Nathalie Fari mounted a series of performances in May where they demonstrated the means of transforming places into omnitopia. Here's how they described their project:

"made in omnitopia is not a mere critique of a coffee shop vignette or the increasing commodification, privatization and uniformity of public space. It is an investigation of our own attitudes and the conditions of social behaviour, codes of communication, postures and positions. We treat the city a site for performative interventions by detourning existing ordinary situations or spaces."

While I was unable to visit with them personally, we did share a swell Skype conversation, and afterward they were kind enough to send me some postcards from the event. I was impressed with the breadth and depth of their theoretical work. Moreover I was amazed at the ways Paula and Nathalie drew from my meager musings to produce something live and meaningful in Berlin. 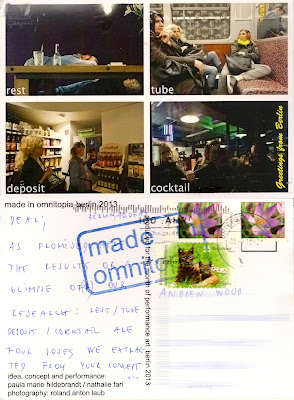 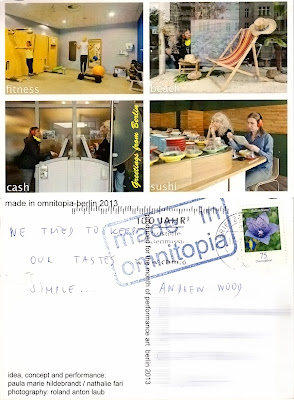 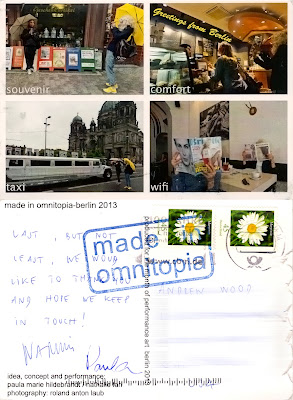 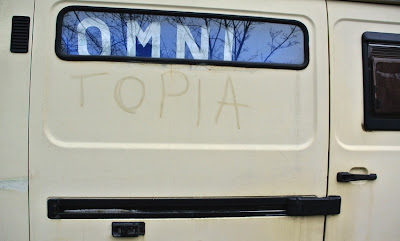 K67_Urban Router's observations
Email ThisBlogThis!Share to TwitterShare to FacebookShare to Pinterest
Posted by highway163 at 9:43 AM 0 comments