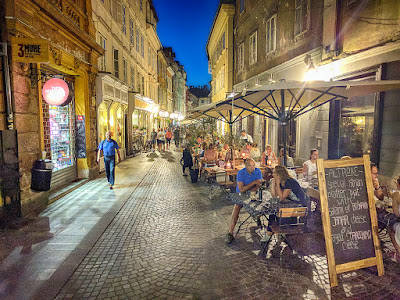 Here's a collection of photos and stories from our 2017 travels through Finland, Israel, the West Bank, and Slovenia 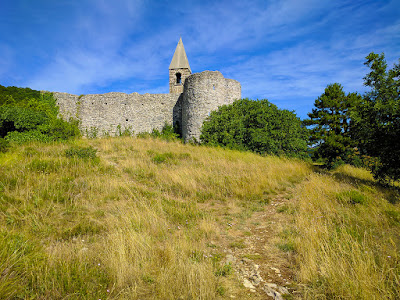 Such a nice Slovenia weekend! After touring Škocjan Caves and nearby Piran on Friday, I awoke Saturday for a quick drive to Hrastovlje’s Holy Trinity Church, a 15th century (some say 12th century) Romanesque holy place surrounded by stone fortifications that once protected against Turkish invasion. 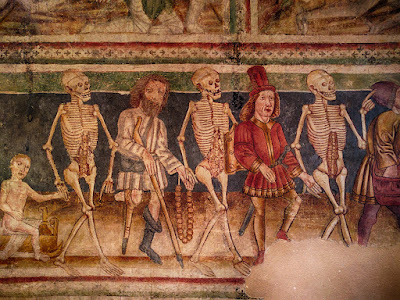 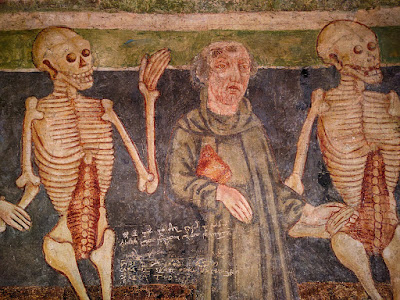 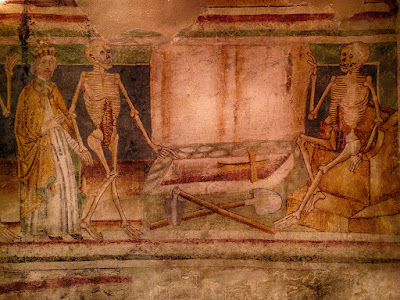 Outside is a bleak, forbidden place. Inside, though, Johannes de Castua’s frescos, most notably the "Danse Macabre,” practically glow with color. Amazingly they had been covered with plaster and only rediscovered in 1949. The dance is a reminder that no one, beggar or king, escapes death. We are fated to face our mortality, and not one or a thousand and one pieces of gold will save us. 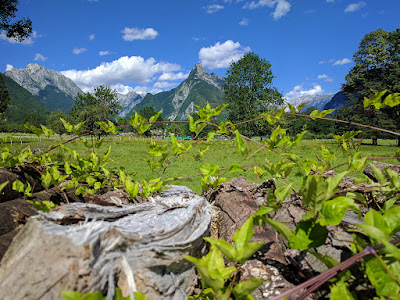 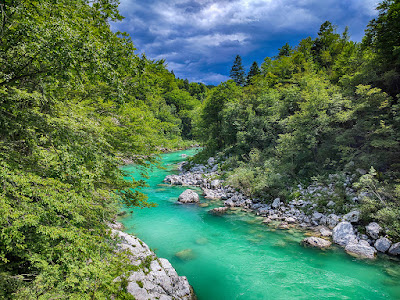 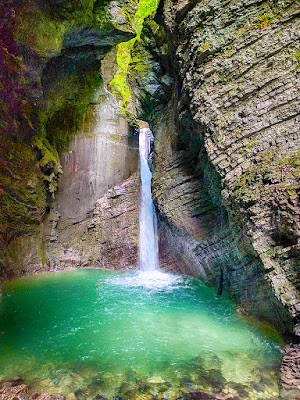 On that happy note, I drove north in search of the emerald waters of Triglav National Park, hiking to visit Slap Kozjak waterfall and take a swim before staying the night in Bovec, a charming alpine village. My apartment was far enough from the central part of town that I needed to walk a narrow footpath alongside flocks of sheep grazing on viridescent grass. At night, I joined the crowd for a concert of accordion players and folk-dancers. 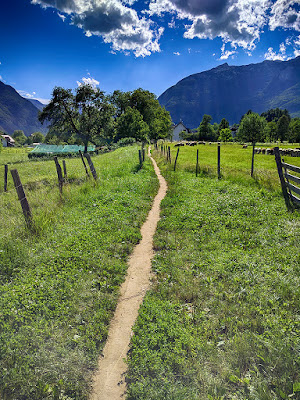 The next morning I tackled the 50 hairpin turns of Vršič Pass. Twisting the narrow path alongside bikers and the occasional tour bus, the summit and descent was easily the scariest drive I ever made. A highlight was the chance to visit the wooden Russian Orthodox chapel built to commemorate the WWI POWs who died in their efforts to construct the road. 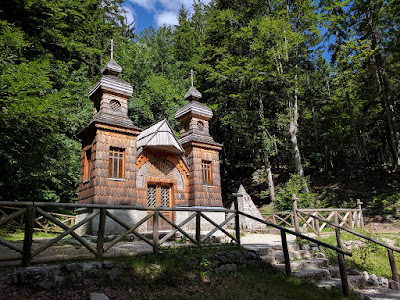 Email ThisBlogThis!Share to TwitterShare to FacebookShare to Pinterest
Posted by highway163 at 10:47 AM 0 comments 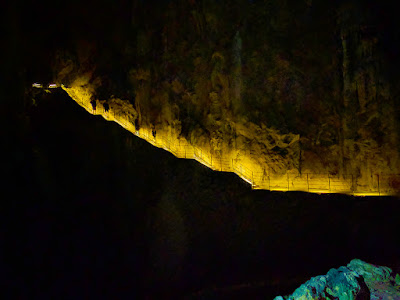 One of those wonderful days… Woke up to rippling grey skies and buckets of rain but grabbed a rental car anyway, and I’m glad I did. By mid-afternoon, I’d joined a tour of Škocjan Caves, quickly made awestruck by the towering caverns and the twisting walkways lit up in orange - and more than a little sweaty by the hike up and out of the gorge. 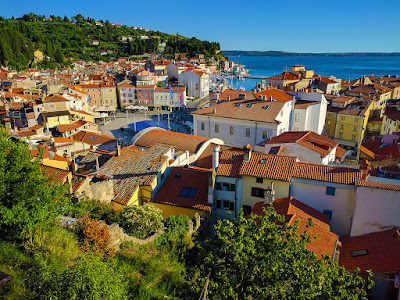 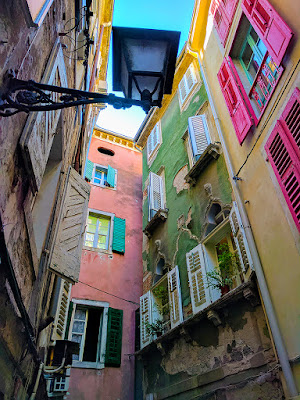 I then made my way a bit further south to Piran on the Adriatic, climbing to St. George's Parish Church and then ordering up pizza by the beach under a blazing blue sky. Ahh, Piran: a slice of Venice in Slovenia (without the Venetian tourist prices). I must say, the highlight of the day was the chance to dip my feet into a tank of Garra Rufa (aka “doctor fish”) who ravished my feet of dead skin, tickling me for about a half hour and leaving me afterward wishing I didn’t have to put my socks and shoes back on. 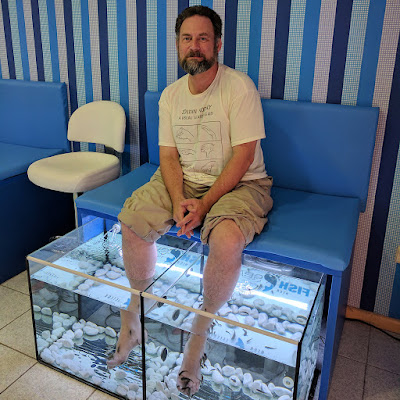 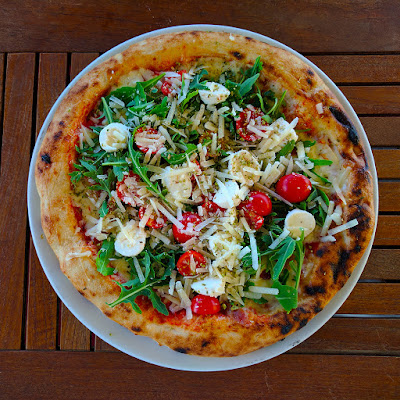 Now I’m at my abode for the night, Guest House Pod Slavnikom, sort of a roadhouse well away from the beach traffic, with its own bar serving up plenty of Laško to celebrate a delightful day on the road. Now the clouds are returning, purple, pink, and bulging with rain. Such a lovely breeze.
Email ThisBlogThis!Share to TwitterShare to FacebookShare to Pinterest
Posted by highway163 at 10:30 PM 0 comments

Here are some of my favorite examples of Ljubljana Street Art. 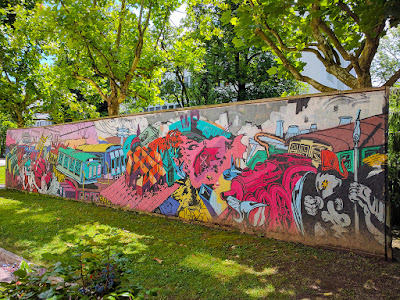 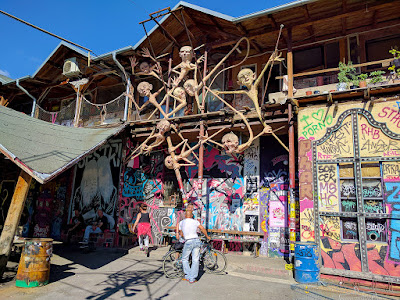 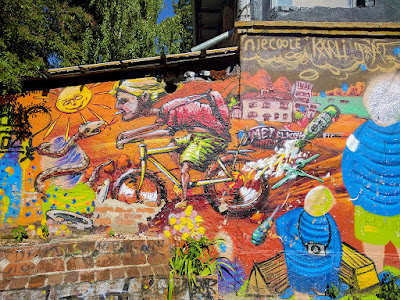 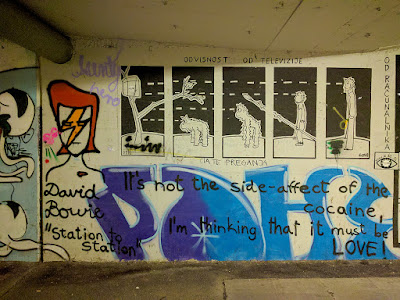 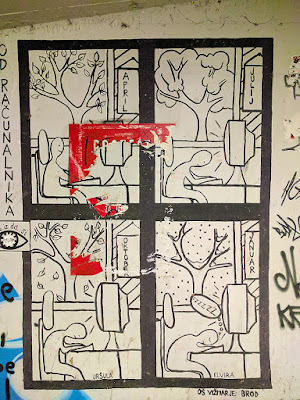 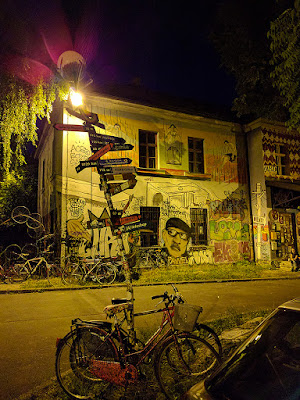 Email ThisBlogThis!Share to TwitterShare to FacebookShare to Pinterest
Posted by highway163 at 11:00 AM 0 comments 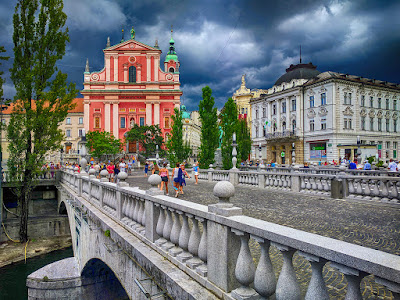 I love it when a city starts to knit itself together. Thanks to Dennis Jaehne (and Jenny!), I’m getting my head around the bus system and developing a set of landmarks to guide my paths. The building that looks like an “escalator to nowhere” is always a handy waypoint, and I’m finally coming to understand the importance of Plato’s as a central jumping off point. It’s funny when someone routinely refers to a landmark, and you know it’s important, but you can’t latch onto it until you need it. Now I see what Dennis meant! 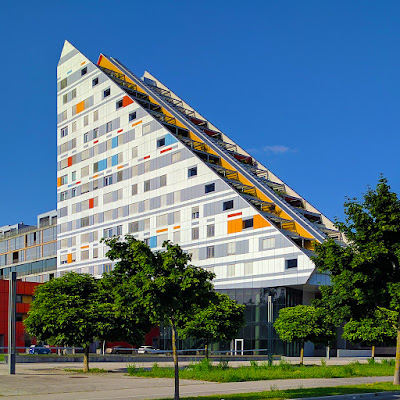 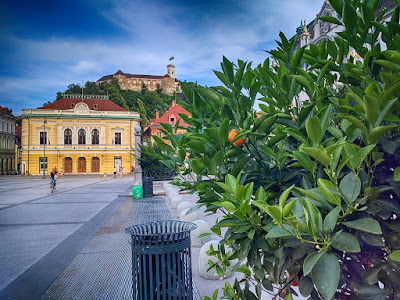 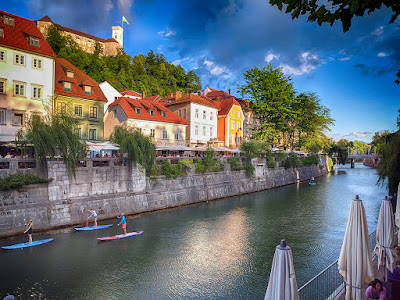 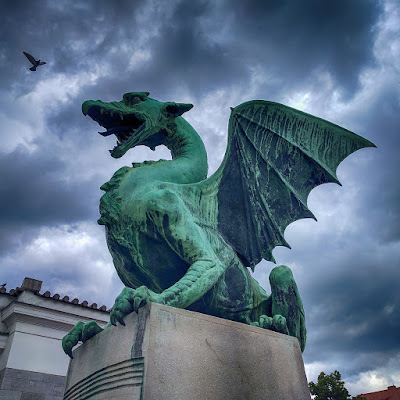 That’s pretty much a theme here, gratitude for his advice that I add Slovenia to my repertoire of experiences. Ljubljana is perfectly lovely: a safe, laid-back river-town with promenades perfect for al fresco dining, a bicycler’s paradise, and a city quite friendly for visitors who only speak English. Oh, and the prices for food, drink, and trinkets are amazingly reasonable. What's more, as a bus and train hub, Ljubljana allows easy access to some other gorgeous places, near and far. 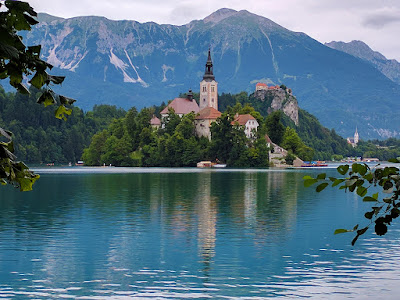 Email ThisBlogThis!Share to TwitterShare to FacebookShare to Pinterest
Posted by highway163 at 10:23 AM 0 comments