Here's our 2014 newsletter - and my wishes for you to enjoy a happy holiday season! Click the pic to download... 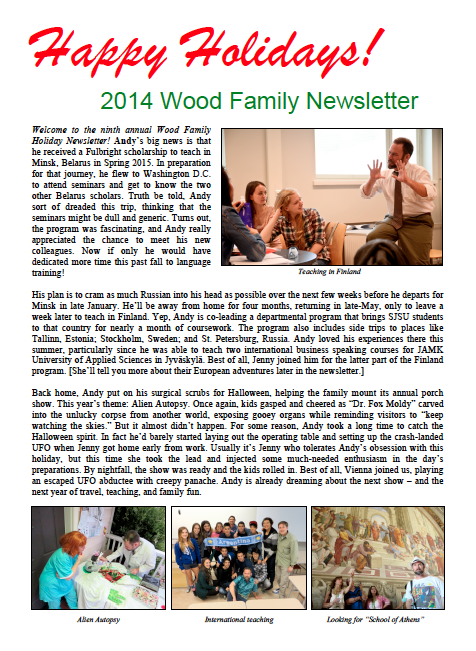 Email ThisBlogThis!Share to TwitterShare to FacebookShare to Pinterest
Posted by highway163 at 4:31 PM 0 comments

This is a new addition to my collection of images that depict the City of Tomorrow. This one is from a book called The Wonderful World: The Adventure of the Earth We Live On (James Fisher, 1954). The artists are Kimpster and Evans (no first names provided). Here's an excerpt: "Man finds it hard to manage his fast machines. His roads are too small, and cause accidents and jams. He can fly in less time from Boston to New York than it may take him to get from the airport to his office. [In contrast, this] city of the future ... is quiet, clean and easy to get about in. But it will not be easy to pull down the old cities and build new ones" (p. 47).

I wonder how many kids stared at this picture while the teacher was marching through some lesson about social studies, civics, or something equally bland to a young mind. It's not too hard to imagine a boy or girl, attention drifting in middle afternoon, looking at the window at the bland scene beyond and thinking, "I can't wait for the future!"
Email ThisBlogThis!Share to TwitterShare to FacebookShare to Pinterest
Posted by highway163 at 12:39 PM 0 comments


Check out this new FedEx spot called "Growing Business." To my way of seeing, it's an example of Origami Urbanism, a topic I tackled as a chapter in Communicative Cities in the 21st Century: The Urban Communication Reader III. There I wrote, "This is the promise of the communicative city: a tangled web of human interaction that we shape and reshape, employing tools of mutability to edit public life into a private performance. Reading our cities as manifestations of origami urbanism, we come closer to completing the modern project by finally becoming its authors."

Oh, and here are two additional fun details. First, I've just learned that a fellow named Martin J. Murray uses the term "origami urbanism" in his 2011 book City of Extremes: The Spatial Politics of Johannesburg. I haven't had a chance to review this text yet, but I hope to do so in the near future. Second, the dude speaking Chinese is Jason Rowland, a pal from my college forensics days!
Email ThisBlogThis!Share to TwitterShare to FacebookShare to Pinterest
Posted by highway163 at 10:04 AM 0 comments