Following up on yesterday's post, here are some more pix from my 2012 street art adventures in Munich. 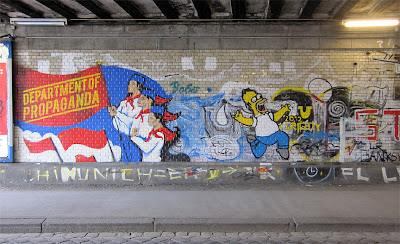 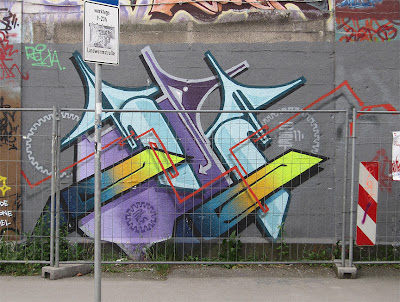 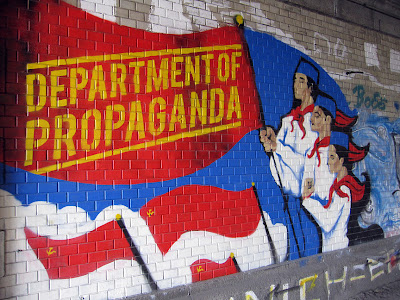 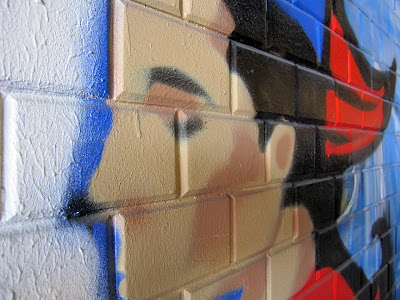 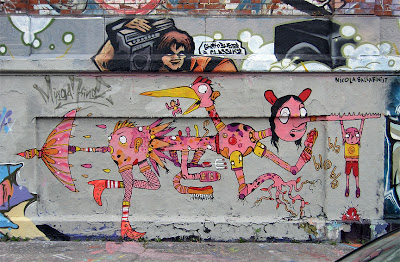 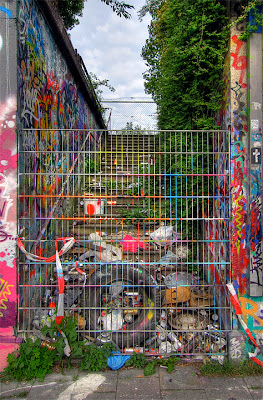 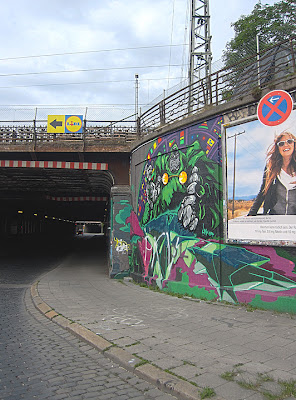 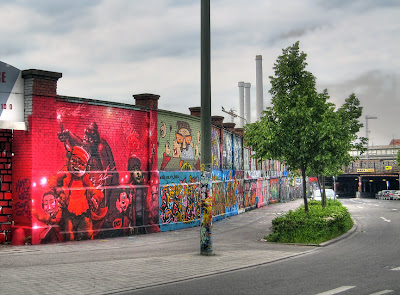 Email ThisBlogThis!Share to TwitterShare to FacebookShare to Pinterest
Posted by highway163 at 4:43 PM 0 comments

Pix from my 2012 street art adventures in Munich. Here are notes from the day. [Update: Here are some newer pix from 2013.] 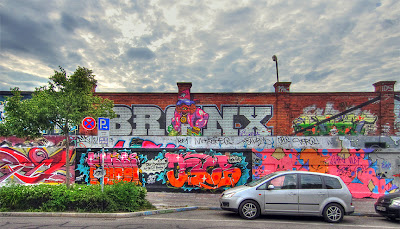 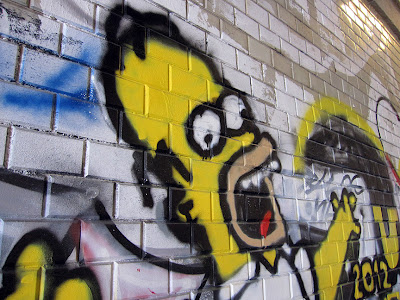 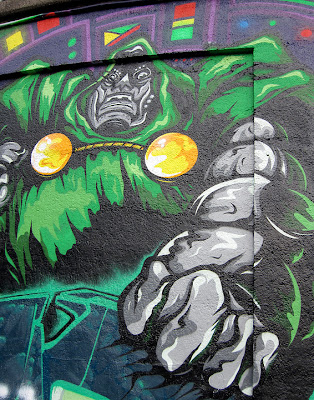 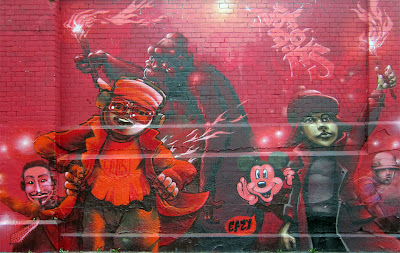 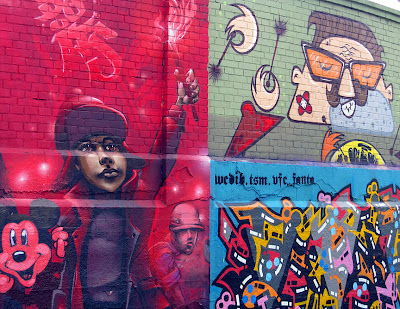 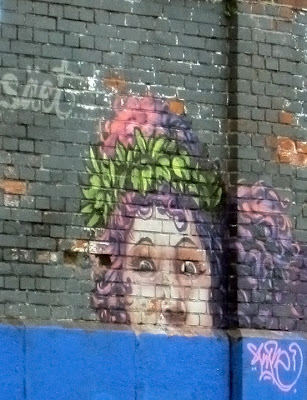 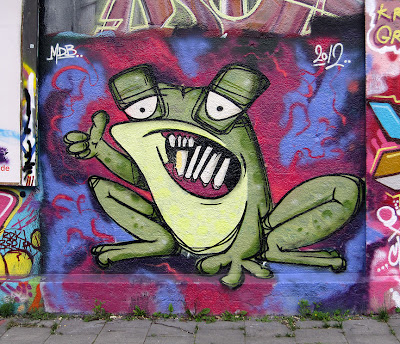 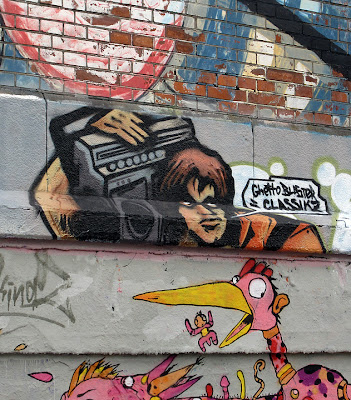 [More pix coming tomorrow]
Email ThisBlogThis!Share to TwitterShare to FacebookShare to Pinterest
Posted by highway163 at 9:03 AM 0 comments

During this spring's solo roadtrip I had a few hours to kill in Dallas and hunted about for some street art. The force is strong in this Deep Ellum hipsterverse. 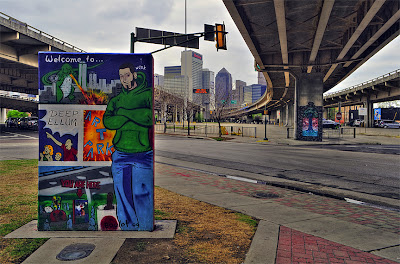 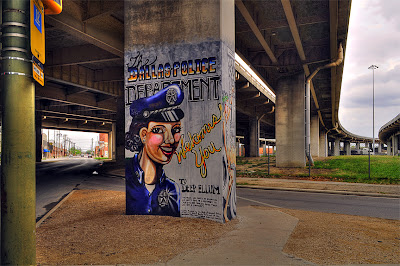 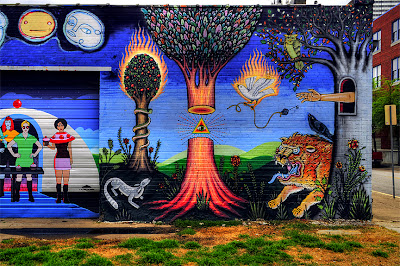 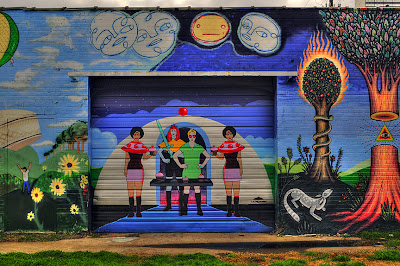 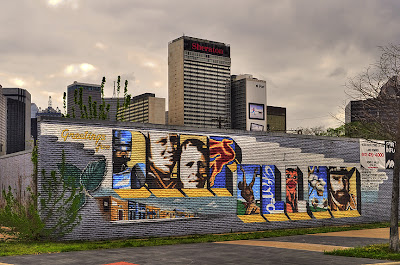 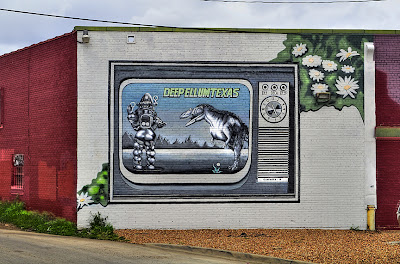 Email ThisBlogThis!Share to TwitterShare to FacebookShare to Pinterest
Posted by highway163 at 8:12 AM 2 comments

Email ThisBlogThis!Share to TwitterShare to FacebookShare to Pinterest
Posted by highway163 at 10:12 AM 0 comments

I'll be sprinkling images and memories from my recent Texas Solo over the next few days. Let's start this week with an animated neon sign that glows in Addison, TX. Syd Nagoshi writes that this google-style beacon for Sigel's Liquor once resided near the Dallas intersection of Lemmon Avenue and Inwood Road. It was moved to this site sometime after 2009.

In fact, here's a surreal time travel experience: As of today, Google Street View shows the sign in its original Dallas location, where it stood for more than five decades. The scene shows construction work underway but the sign still hangs on. Advance the map left or right though, and - poof! - the sign is gone; the place has been replaced by a bank. This effect will surely vanish as Google updates its files, so...


View Larger Map
Email ThisBlogThis!Share to TwitterShare to FacebookShare to Pinterest
Posted by highway163 at 8:29 AM 0 comments

Yesterday evening I received a Google news alert that two of my favorite movies, The Last Picture Show and Dazed and Confused, will be shown as a double feature at San Francisco's Castro Theatre. I've already seen a proper projection of Richard Linklater's ode to 70s ennui, but I'd promised myself I'd fly anywhere in the country to see Peter Bogdanovich's masterpiece on the big screen. I'd waited years for this opportunity. One automated email and I was already planning my moviegoing pilgrimage (just an hour's drive away!). Ten minutes later I saw the news that Roger Ebert died.

Roger Ebert won the Pulitzer Prize for criticism, but he also wrote the screenplay to Beyond the Valley of the Dolls. He failed to appreciate Starship Troopers, but at least he loved Dark City. He saw through the blood-soaked finale of Bonnie and Clyde to spot a masterpiece, and he recognized a nihilistic genius in Rob Zombie's The Devil's Rejects. When Vincent Gallo made fun of his weight, Ebert replied, "It is true that I am fat, but one day I will be thin, and he will still be the director of The Brown Bunny." Then when Gallo revised his film, Ebert praised the transformation.

Roger Ebert took movies, and people, as they came, accepting them on their own terms. He'd call them on their cowardice or their senselessness, he'd hurl epithets from the balcony, but he'd stand up from the seats and shout the praises for any movie willing to deliver on its promises (We might want to reconsider our expectations afterward, and he reflected upon those implications too). Ebert inspired me to read A.O. Scott, Jonathan Rosenbaum, and Pauline Kael, but he never called for his readers to sacrifice the pleasure of movies for the highfalutin demands of "cinema."

Ebert studied movies and somehow also managed to affirm that we should strive to love others, to live well, to be tolerant, and to take risks. He championed unknown creators, embraced social media, and shared freely of his thousands of reviews. He wrote a book about rice cookers (The pot and how to use it) after losing part of his jaw to cancer. He communicated more widely and more broadly after losing his capacity for speech. And only a couple days before his death at 70 did he announce his "Leave of Presence."

I never met Roger Ebert. I never attended one of his famed frame-by-frame screenings. I never even commented on his insanely prolific blog. But I imagined that I knew him. I could visualize this geeky kid growing up in Illinois. I could imagine him trying to look cool when he summoned the guts to drink with Mike Royko. And I could guess at the pleasures he found at the opportunity to collaborate with Russ Meyer, an artist who shared his predilection for a particular aspect of the female anatomy. Roger Ebert was cultured but not uptight, passionate but not dogmatic, respectful but not afraid to stick the analytical knife. He was the kind of person I'd like to be.
Email ThisBlogThis!Share to TwitterShare to FacebookShare to Pinterest
Posted by highway163 at 10:53 AM 0 comments 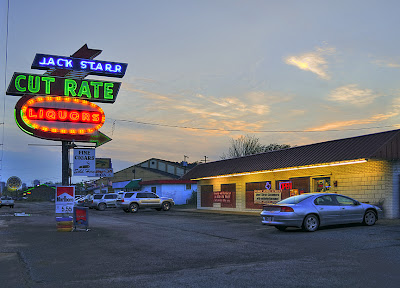 During my 2013 Spring Solo I spent a lot of time searching for animated neon signs. I only found a few that spoke to me, but they were worth the wait. This one -- Jack Starr Cut Rate Liquors in Forth Worth, TX -- surprised me. I was cruising the boulevards waiting for dusk, an ideal time to shoot a nearby motel, when I saw this glorious sign. After all my research, I'd never heard of this place. I couldn't wait to set up my tripod. Most folks ignored me; they were intent on grabbing their bottles and scooting out. But a few stopped and stared at the sign, almost as if they'd never quite noticed it before.

Email ThisBlogThis!Share to TwitterShare to FacebookShare to Pinterest
Posted by highway163 at 8:18 AM 0 comments