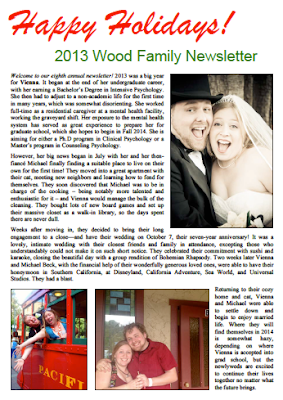 Click the image to read our holiday newsletter, or simply download it here!
Email ThisBlogThis!Share to TwitterShare to FacebookShare to Pinterest
Posted by highway163 at 10:00 AM 0 comments

The following is a guest post from "Eddy," a friend I met while attending my fourth Salzburg Global Seminar. As you’ll shortly see, "Eddy" offers a practical, personal, and thoughtful form of engagement with the sometime overwhelmingly complex realities of global capitalism. When he shared these notes with me, I asked for permission to repost them here.

I’m currently staying/participating at a squatted site called Grow Heathrow. It is proving to be quite an important time for me. Politically affirming. I came here to learn skills, connect with others who have similar ideas about how we provide for ourselves, and give my support to a cause/project I’m passionate about. The squat originated from a need to confront the proposed plans for a third runway at Heathrow Airport. The government in the UK has been looking at airport expansion for a while now – there’s still talk as to where this expansion will take place. If they opt for Heathrow, they’ll have to remove the squatters from this land and tarmac over the village of Sipson; one of the principal aims of the project is to instill community resistance in Sipson against Heathrow Airport Holdings (formerly British Airports Authority), if they come knocking.

The attitude here is great. People are focused. It's a working squat. People arrive for many reasons. I'm here to work. That’s where my head is at the moment - I want to be productive, to be useful. Other visitors are here to enjoy themselves, relax and talk with others. This is a haven for free thought - a space to breathe for those disillusioned with materialism.

Here there’s no room for the workings of capital - no pressure to work the 9 to 5. It is a kind of political expression that directly challenges labour, the 9 to 5 grind. It is this kind of political expression that interests me at the moment, as opposed to attending the monthly anti-war protest/demonstration. Protest is important, but we must also set the agenda. ‘If all we do is oppose what they are trying to do, then we simply follow in their footsteps’.[1] We need to carry on with our activity that isn’t determined by money. We must dedicate ourselves to what we consider necessary or desirable. We must live the world we want to create.[2] Besides, protesting wipes me out (as I recently experienced at the protest against Fracking at Balcome). Not sure I want to devote my time and energy to protests, where we shout, confront police etc. It's not in my nature to use physical force against other humans. Probably too middle class. It's not in my nature to shout about things, sing chants, etc. Perhaps if it's a cause that really riles me up, then I might reconsider.

At the squat there is a non-hierarchical, anarchistic set up. No one is instructed to work. People work when they feel ready to. There are always tasks to be done. People wake up, a group gets together, starts talking - momentum starts to build and we work on a project. And we work hard. But it doesn't feel like work. Because we’re there at our own will, because it’s a cause we believe in, there’s such camaraderie in our collective work. It’s fun and social. What great conversations emerge during work. Working together on something, where there’s a common goal, an objective, sometimes sparks more interesting conversations than assembling with the intention to socialise. During the summer there seems to be a huge flux of international travellers who have heard about the project. The squat reminds me of travelling in hostels – spaces to socialise, unwind and talk idealistically.

A working mind is a healthy mind. People are happy when they're productive, when they're being useful. Their self-esteem grows, their self-confidence and sense of value to the group benefits. During this first month, I have easily forgiven those who have not managed to work and contribute fully.  There will be a long history of reasons as to why some are able to contribute more than others. Those that don't, we should have sympathy for and try to understand why, rather than resent them. I guess I am just grateful I have this working mind, this motivation. I've only been here for a month, and my feelings on this may change. Without special resolve and grit, I imagine it is easy to lose patience over time.

The experience thus far is fulfilling a personal need to experiment with new forms of social relations outside capitalism. Grow Heathrow is an open project with plenty space for people to join the site. Contrary to other squats, it is the project that brings the inhabitants of the site together, rather than a group of friends. This kind of experiment in communal living has its rewards and challenges. There are those that use this space as some kind of refuge from some torment in their lives outside the squat. Although they are often unable to contribute to the collective in a variety of ways, the space must try to accommodate their distress. The community must do its upmost to prevent looking inwards. One older lady, who was previously in a mental institution, has benefitted immensely from gardening, working outdoors and being with people. She tells me how lonely she gets in the evenings on her own in her flat. Living communally trumps any discomfort from sleeping without a mattress.

The squat relies on solar panels and a wind turbine for its electricity, has no running hot water from the tap (although an impressive warm shower wood burner has been built) and there’s a compost toilet on site, minimising water usage. Almost all the food consumed is either grown on site, taken from bins outside supermarkets, or from food wholesalers giving away waste food. I must say, I do get a sense of gladness as I walk about doing my daily activity without barely any ecological footprint.

After 5 months in Salzburg (or rather a lifetime) of talking about the problems of the world, and what needs to be done, I am finally in a living and working arrangement that satisfies my political need to get to grips with the ‘doing’. When I wake up in the morning I feel as though I’m in the right place. At least for now. We’ll see how it goes this autumn.

The land that the community is occupying is up for eviction. So there is that added insecurity that for some residents makes long term-commitment/planning difficult. Indeed, their innate instability and transitory nature is a key criticism of squatted social centres. I seem to forget that bailiffs could start breaking through the gate any minute. Part of me doesn’t believe it will happen: Who would break-up such a peaceful, well-meaning, environmental project? I come across as naïve to some of the old-time squatters, who tell me I’ll soon understand what we’re fighting against when I see the State use its might to destroy any dissenting activity. Property is king. I wonder where I’ll be, what I’ll do when we’re being evicted. I probably won’t know how I’ll react until it’s happening. Can physical force ever be successful against the State? History shows that violence and aggression is what it often does best. Why play them at their own game? But if someone is evicting you from your home - if I develop some emotional attachment to this place - there’s no knowing how one might react.

Email ThisBlogThis!Share to TwitterShare to FacebookShare to Pinterest
Posted by highway163 at 9:21 AM 1 comments

For no particular reason...

Email ThisBlogThis!Share to TwitterShare to FacebookShare to Pinterest
Posted by highway163 at 5:36 PM 0 comments 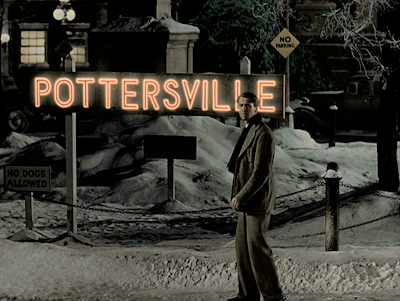 Last week Jenny, Vienna, Mike, and I saw It's a Wonderful Life on the big screen in Scotts Valley. Naturally the theater projected the unadulterated black-and-white version, but I must admit a fondness for the colorized version - at least for the scenes in which George Bailey stumbles through the post-apocalyptic hellscape that is Pottersville. To be clear, I'm not referring to eighties-era Night of the Living Dead colorization that transformed human beings into ghoulish pastel mutations; I mean the much more subtle revision engineered by Legend Films in 2007. 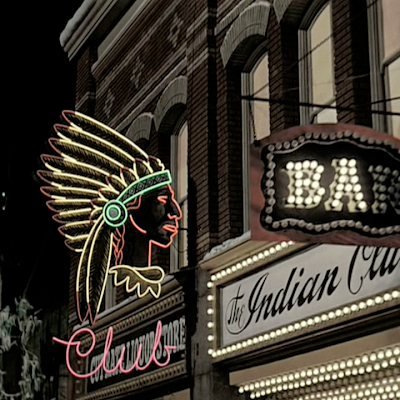 OK, I get it: Colorization adds nothing substantial to It's a Wonderful Life. You hardly need techno-fakery to identify with young George's wanderlust ("You know what the three most exciting sounds in the world are? … Anchor chains, plane motors and train whistles"). And you certainly don't need a software solution to celebrate Bailey's appreciation for the fortune he finds in boring old Bedford Falls. When considering the larger themes of Frank Capra's masterpiece, the addition of chromaticity offers nothing more than a clever cheat. But for that gloriously nightmarish sequence in Pottersville, color makes a compelling point. 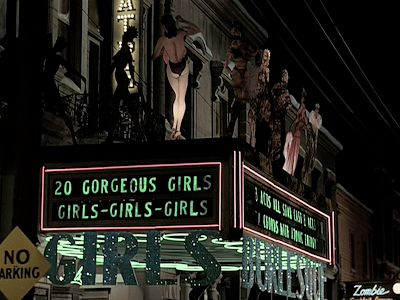 I am reminded of Gary Kamiya's outstanding Salon piece, "All hail Pottersville," which makes a convincing case that monochromatic Bedford Falls, despite its Norman Rockwell charm, is actually a pretty miserable place ("like Bentham’s Panopticon with picket fences"). In colorful contrast, Pottersville, with its hepcat jive music, garish neon, and shoot-first-ask-questions-later cops, could actually be a lot of fun: "Alas, we will never know what delights are hidden behind the door of the Indian Club or the Bamboo Room, the Midnight Club or the Blue Moon." Kamiya is (mostly) kidding, but his point stands. It may be a guilty pleasure, but give me Pottersville in color! 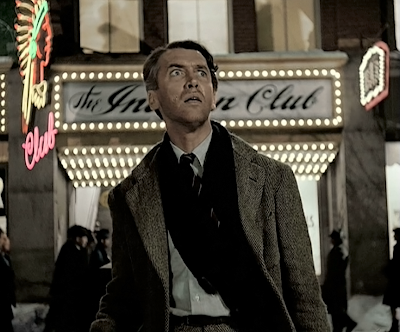 Email ThisBlogThis!Share to TwitterShare to FacebookShare to Pinterest
Posted by highway163 at 12:01 PM 0 comments

Since I occasionally quote Ram Dass's phrase "Be Here Now," I was amused - though a bit disheartened - to spot this variant on a poster for a San Jose bike-share rack: "Be There Now." The change is subtle but important. 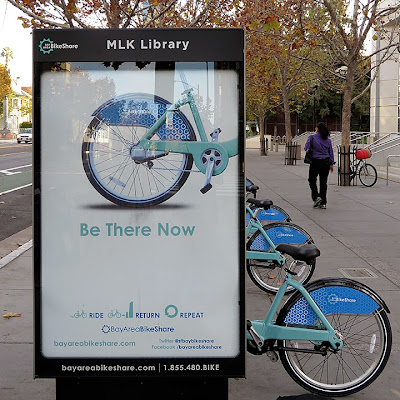 Email ThisBlogThis!Share to TwitterShare to FacebookShare to Pinterest
Posted by highway163 at 7:27 AM 0 comments