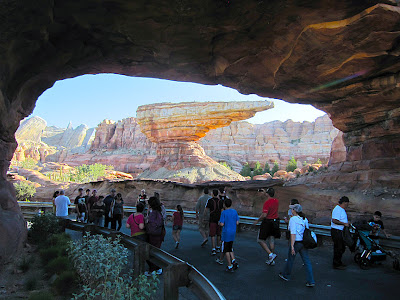 Jenny and I finally visited Cars Land, a remarkable addition to Disney California Adventure. Quick verdict? Cars Land presents an intricately detailed reproduction of Radiator Springs, and a perfect illustration of how Route 66 is becoming "Route 66." This is not to critique the achievements of those amazing Disney imagineers. Touring a life-sized Cozy Cone Motel, gazing upon Ornament Valley's perpetual late-afternoon glow, and savoring the thrill of glorious animated neon at night, you get a charming Route 66 fantasy squeezed into 12 kid-friendly acres. [Check out my video, and click 720 for highest quality!]

Cars Land is predictably crowded, but that's part of the fun. And folks seemed to enjoy the sense of place in this part of the park (something DCA hasn't quite pulled off with their 1920s Hollywood reboot). Sure, beneath the colorful facade resides the same Disney experience: wander-wait-ride-eat-shop. If only Cars Land included more spaces built to inspire interaction among park guests, perhaps a wandering storyteller or two, or at least a couple educational displays about the real Mother Road. Maybe Disney will add a little more Route 66 to their version of "Route 66." But there's no point in complaining. Cars Land, simulacrum that it is, still offers up one heck of a ride. 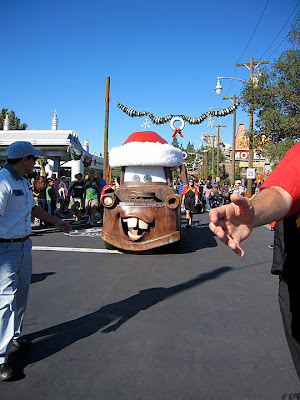 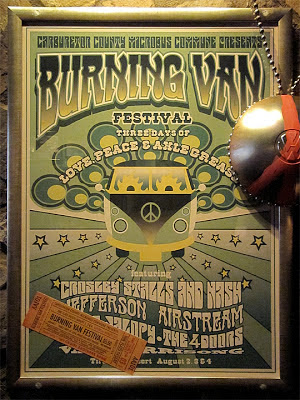 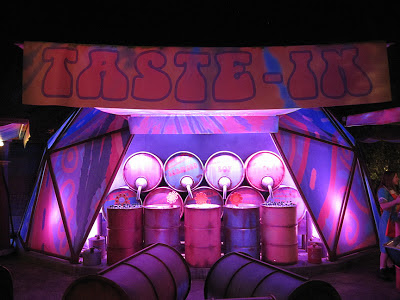 Planning a visit? Here are a few tips:

1. If you want a chance of snagging one of those Radiator Springs Racers fastpasses, line up early outside the DCA entrance, before the park opens. On both days we visited, they were gone by about 9 a.m.

2. Got your Radiator Springs Racers fastpass? Great. Prepare for frustration anyway. The ride seems to break down a lot.

3. Missed a fastpass? Try the single-rider line, which allows the park to fill every last seat with folks willing to separate from their groups. When Jenny and I used that line (twice!), we managed to sit together anyway.

4. One last Radiator Springs Racers tip: Ride it at night. The neon glow adds to your personal show.

5. Grab a meal at Flo's V8 Cafe. The food is tasty and reasonably priced (considering that you're on a Disney property).

6. Take a look at the Blue Sky Cellar near the Cars Land entrance. They've got a small but interesting set of "making-of" displays. 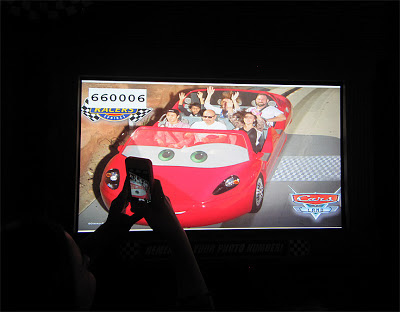 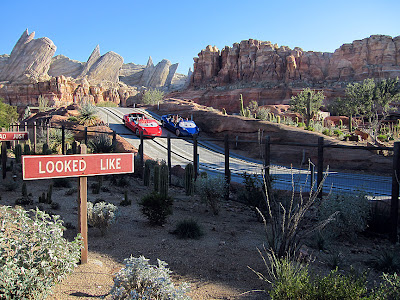 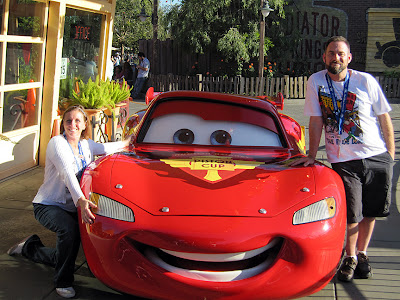 [More pix]
Email ThisBlogThis!Share to TwitterShare to FacebookShare to Pinterest
Posted by highway163 at 8:41 AM 0 comments

Miguel Jiron reminds us that sometimes the best way to help someone who feels overwhelmed by the crush of life is to do almost nothing.

Email ThisBlogThis!Share to TwitterShare to FacebookShare to Pinterest
Posted by highway163 at 8:58 AM 0 comments

The Party's Over (Thank God)

The 2012 election was an endless dinner party whose guests showed up drunk, puked on the pets, and set the rug on fire. Now it's morning in America, and the house is trashed. There's a big screen TV on the lawn, there's a copy of Atlas Shrugged in the toilet, and there's pudding in the blender [Who the hell put pudding in the blender?]. I'm trying to coax the cats back into the living room. I'm saying, "It's over, kitties. Those awful people are gone." The felines know better though; the guests are still here. Some are sleeping, snoring, drooling. Yet a few are pre-gaming for the next big bash, God love 'em. They are, after all, us.

We voted (some of us, at least) on November 6th, but we also expressed our every thought on this grand debate, extolling our opinions all over Facebook, Twitter, and, for all I know, Instagram. We posted and we tweeted and we exclaimed, loudly, that these two candidates somehow reflect the Manichean cosmos of America, blithely ignoring our quiet doubts that the candidates never really debated, not in a meaningful way. Somehow we know that this election cycle was a war between pundits and handlers and flaks who battle only for their own aggrandizement. Party politics as reality television. Here Comes Honey Boo Boo in '16.

Yes, Barack Obama and Mitt Romney offered distinct agendas. And I preferred one to the other. I still do. Yet I know - and you know it too - that the parties who sustain them represent nothing more than a singular culture industry, a machine that produces little more than sound and fury, bread and circuses. At times it felt like we were watching a Coke-vs.-Pepsi Taste Test and actually caring about which sugar water quenches our thirst. It's a game of dissemination, not dialogue, and we're rotting with every corn syrup swig.

A few folks eschewed the vitriolic attacks and bumper sticker discourse that marked this sad, silly season. Jenny, to great credit, attempted a sane and responsible conversation over the past few months, even as some of her Facebook friends became increasingly unhinged. She explored the issues, read broadly, and struggled to make the right call. She tried to vote for both faith and facts. All too frequently, though, many of us abandoned our better angels. I certainly did.

More than once I said to some pals how much I hated Mitt Romney. Hated him. Not just for his policies (whatever they were that particular week) but for his pandering, his cynicism, and that sanctimonious half-smile that invariably preceded a lie. I hated him for the day, years ago, when he supposedly led a pack of prep school bullies to beat up a kid and cut his hair. I hated him for that dismissal of 47 percent of Americans as too lazy and too weak to be born a millionaire. And I hated his cowardly genuflection to the likes of Rush Limbaugh and Donald Trump. I admit it, I sometimes enjoyed how much I hated Mitt Romney, the clarity of it all.

And now the party's over and we're stuck with the mess. Mitt Romney will probably find a way to make a few more millions. But he'll still hang around too, if only because those Americans who voted for him aren't going anywhere. His partisans are no less sure of their votes now than before election night, and I can't blame them. We could take a walk of shame, but we'd wind up together, right (and left) where we started. It's our house, after all. Honestly I'm not sure how to start cleaning up the mess we've made. The cats are still freaked out, a stench is beginning to rise, and that gunk in the blender? I'm not sure it's pudding. At least I can take some solace in a few wise words I heard on Tuesday night:


"This is a time of great challenges for America, and I pray that the president will be successful in guiding our nation… The nation, as you know, is at a critical point. At a time like this, we can’t risk partisan bickering and political posturing. Our leaders have to reach across the aisle to do the people’s work… This election is over, but our principles endure."

Those are good words, decent words. They remind us of our obligation to be a little kinder to each other, a bit more tolerant of our different beliefs, and a lot more humble. We Americans are a contentious bunch. Always have been, always had to be. We've faced imperial constraint, civil war, economic collapse, and totalitarian advance - and somehow we've stuck together. Better yet, somehow we've managed to expand the sphere of public life, slowly, to include more and more of us. We've been better than this past four years, and we can be better again.

"This election is over, but our principles endure."

Well spoken, Governor Romney.
Email ThisBlogThis!Share to TwitterShare to FacebookShare to Pinterest
Posted by highway163 at 9:12 AM 1 comments

This year Jenny and I set out to recreate our first Wood Family Halloween Porch, the 2004 Pirate Dungeon. As usual we spent most of our prep time focusing on the set pieces - a treasure chest, some gory "grog," a skeleton captain against whom we'd just mutinied, a baby sailer (who happens to be a zombie), a "porthole" that featured a roiling ocean scene, and even some rigging! Check out the video...

...and stick around for the outtake!

As usual, we found little time to think up characters or backstory. Fortunately Jenny printed up a "Pirate-speak" cheat sheet a few minutes before we started the show. From about 6 to 8:30 we shared our swashbuckling Halloween Porch with hundreds of kids. Folks seemed to enjoy the performance, and I'm already thinking about returning to this theme next year. Now... where can I find a cannon? 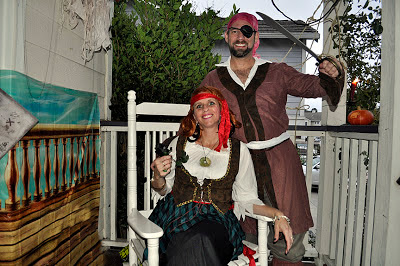 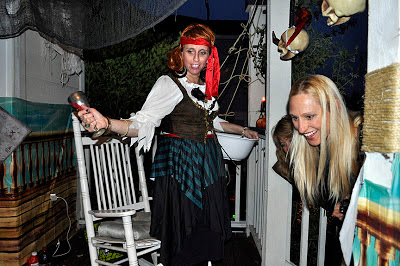 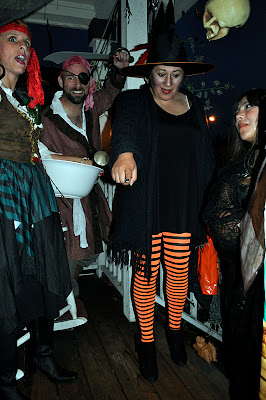 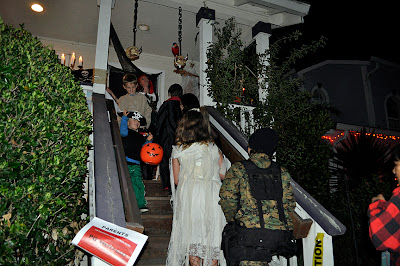 • 2004: Pirate Dungeon I [Pix]
Email ThisBlogThis!Share to TwitterShare to FacebookShare to Pinterest
Posted by highway163 at 6:05 AM 0 comments