It's been a fascinating, exhausting, strange, and amazing year. Some highlights:

• Wandering in Weimar (MAY)

• Dancing in the DPRK (AUG)

Email ThisBlogThis!Share to TwitterShare to FacebookShare to Pinterest
Posted by highway163 at 10:09 AM 0 comments 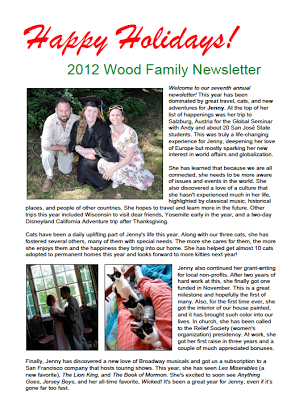 Click the image to check out our holiday newsletter, or simply download it here!
Email ThisBlogThis!Share to TwitterShare to FacebookShare to Pinterest
Posted by highway163 at 9:44 AM 0 comments

The Image of the City


Yesterday I reread Kevin Lynch's The Image of the City. The book, published in 1960, is dated by a number of anachronistic terms, the masculine-gendered pronoun usage, and its obvious focus on white, middle class folks (and, of course, the anxious feeling that one is grooving on Sean Connery's version of James Bond when everyone else is buzzing about the Daniel Craig model). Add the obligation to plod through numbingly detailed analyses of three U.S. cities (Boston, Jersey City, NJ, and L.A.), peering through thick layers of history to imagine then-contemporary images urban life, and you've got much potential for frustration.

Even so, this is a remarkable book, one whose precepts, elementary as they may appear to today's readers, offers useful insights well beyond the realm of urban planning. Indeed, I found myself connecting The Image of the City to a number of ongoing personal and professional projects: improving the flow and "legibility" of my classroom Prezis, exploring "navigation" as an analogy for writing/teaching/learning, and considering a range of broader community-building opportunities. Here are some of my favorite quotations.

Definition of the image: "the generalized mental picture of the exterior physical world that is held by an individual" (p. 4).

Among its several benefits (listed on page 4), a good image "can furnish the raw material for the symbols and collective memories of group communication" (p. 4).

Social change: "A frequent problem is the sensitive reshaping of an already existing environment: discovering and preserving its strong images, solving its perceptual difficulties, and, above all, drawing out the structure and identity latent in the confusion… It will probably be more difficult to gain an understanding of the problem and to develop the necessary design skill than it will be to obtain the necessary powers, once the objective is clear" (p. 115, 117).

Pedagogy: "The final objective of such a plan is not the physical shape itself but the quality of an image in the mind. Thus it will be equally useful to improve this image by training the observer, by teaching [him or her] to look at [the] city, to observe its manifold forms and how they mesh with on another… Such education might be used, not only to develop the city image, but to reorient after some disturbing change" (p. 117, emphasis in original).

"In the development of the image, education in seeing will be quite as important as the reshaping of what is seen" (p. 120).

"The observer ... should play an active role in perceiving the world and have a creative part in developing [the] image. [He or she] should have the power to change that image to fit changing needs. An environment which is ordered in precise and final detail may inhibit new patterns of activity… What we seek is not a final but an open-ended order, capable of continuous further development" (p. 6).

On the frustration of fruitless journeys [unnamed subject reflecting on Los Angeles]: "It's as if you were going somewhere for a long time, and when you got there you discovered there was nothing there, after all" (p. 41).

"The image of a given physical reality may occasionally shift its type with different circumstances of viewing. Thus an expressway may be a path for the driver, [an] edge for the pedestrian" (p. 48, emphasis added).

"The image itself [is] not a precise, miniaturized model of reality, reduced in scale and consistently abstracted. As purposive simplification, it [is] made by reducing, eliminating, or even adding elements to reality, by fusion and distortion, by relating and structuring its parts. It [is] sufficient, perhaps better, for its purpose if rearranged, distorted, 'illogical.' It [resembles] that famous cartoon of the New Yorker's view of the United States" (p. 87).

"If the environment is visibly organized and sharply identified, then the citizen can inform it with [his/her] own meanings and connections. Then it will become a true place, remarkable and unmistakable" (p. 92, emphasis in original).

"The city is not built for one person, but for great numbers of people, of widely varying backgrounds, temperaments, occupations, and class… The designer must therefore create a city which is as richly provided with paths, edges, landmarks, nodes, and districts as possible, a city which makes use of not just one or two form qualities, but of all of them. If so, different observers will all find perceptual material which is congenial to their own particular way of looking at the world" (pp. 110-111).

"It is important to maintain some great common forms: strong nodes, key paths, or widespread regional homogeneities. But within this larger framework, there should be a certain plasticity, a richness of possible structures and clues, so that the individual observer can construct [his/her] own image: communicable, safe, and sufficient, but also supple and integrated with [his/her] own needs" (p. 111).

Potentially important link to Walter Benjamin/Susan Buck-Morss/Carlos Gallego [and Michael Calvin McGee?]: "We need an environment which is not simply well organized, but poetic and symbolic as well… By appearing as a remarkable and well-knit place, the city could provide a ground for the clustering and organization of these [personal] meanings and associations. Such a sense of place in itself enhances every human activity that occurs there, and encourages the deposit of a memory trace" (p. 119, emphasis in original, bolding added).

The method of image analysis

• A note about edges: "An edge may be more than simply a dominant barrier if some visual or motion penetration is allowed through it - if it is, as it were, structured to some depth with the regions on either side. It then becomes a seam rather than a barrier, a line of exchange along which two areas are sown together" (p. 100).

• A note about nodes: "Nodes are points, the strategic spots in a city in which an observer can enter, and which are the intensive foci to and from which he is traveling" (p 47). Example: "The subway stations, strung along their invisible path systems, are strategic junction nodes" (p. 74).

• A note about landmarks: "A landmark is not necessarily a large object; it may be a doorknob as well as a dome" (p. 101).

• A note about the potential for regionalization: "A spatial region would be distinguished from a spatial node (a square) because it could not be scanned quickly. . It could only be experienced, as a patterned play of spatial changes, by a rather protracted journey through it. Perhaps the processional courts of Peking, or the canal spaces of Amsterdam, have this quality. Presumably they evoke an image of great power" (p. 105).

Hierarchical: "This organization [has] the quality of a static map. Connection [is] made by moving up to the necessary bridging generality, and back down the desired particular" (p. 89)

Continuous organization: "The image [is] put together in a more dynamic way, parts being interconnected by a sequence over time… and pictured as if seen by a motion picture camera" (p. 89).

Beyond hierarchical and continuous organization: "Intuitively, one could imagine that there might be a way of creating a whole pattern, a pattern that would only gradually be sensed and developed by sequential experiences, reversed and interrupted as they might be. Although felt as a whole, it would not need to be a highly unified pattern with a single center or an isolating boundary. The principal quality might be sequential continuity in which each part flows from the next -- a sense of interconnectedness at any level or in any direction. There would be particular zones that for any one individual might be more intensely felt or organized, but the region would be continuous, mentally traversible in any order. This possibility is a highly speculative one: no satisfactory concrete examples come to mind" (p. 115).

Good places [whether in cities, in teaching, or in other environments]

The value of the panoramic view: "There [is] an emotional delight arising from a broad view… Would it be possible, in our cities, to make this panoramic experience a more common one, for the thousands who pass every day? A broad view will sometimes expose chaos, or express characterless loneliness, but a well-managed panorama seems to be a staple of urban enjoyment" (p. 44)

A good street often "acts ambiguously either as linear node, edge, or path for various people at various times" (p. 65).

"Where the journey contains such a distinct series of distinct events, a reach and passing of one sub-goal after another, the trip itself takes on meaning and becomes an experience in its own right" (p. 97).

Effective nodes: "If a break in transportation or a decision point on a path can be made to coincide with the node, the node will receive even more attention" (p. 102)

A note about time series: "Here what would be imaged would be the developing pattern of elements, rather than the elements themselves - just as we remember melodies, not notes" (p. 107).

"If an environment has a strong visible framework and highly characteristic parts, then exploration of new sectors is both easier and more inviting" (p. 110).

Email ThisBlogThis!Share to TwitterShare to FacebookShare to Pinterest
Posted by highway163 at 9:54 AM 0 comments

Recently I was interviewed by the Merc's Patrick May for a story about the prediction industry. Here's a notable quote: "The bottom line, Wood said, is that we're all out there grasping at straws, which soothsayers are all too ready to hand us. "As we lose confidence in so many institutions collapsing around us,'' he said, "predictions reconstitute the belief that some person has a clue. It's a useful and therapeutic fiction, but it's also pleasurable, as long as we don't take it all too seriously."

Read the entire article: Predictable start to season of predictions

Email ThisBlogThis!Share to TwitterShare to FacebookShare to Pinterest
Posted by highway163 at 12:33 PM 0 comments

For no particular reason, a few more photos from DCA's Cars Land. Oh, and if you haven't yet seen the video, here's a link! 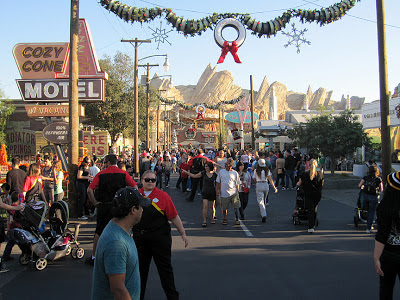 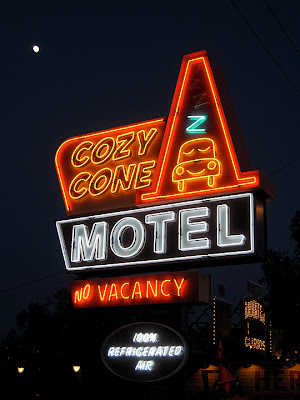 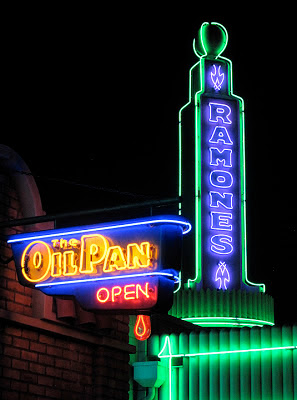 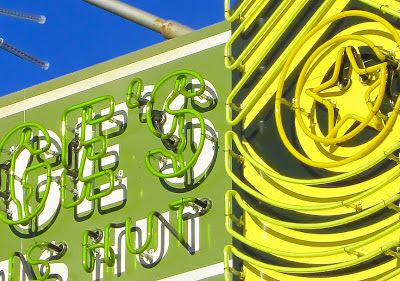 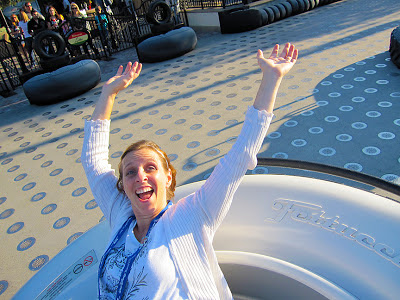 [Photographs by Andrew F. Wood]
Email ThisBlogThis!Share to TwitterShare to FacebookShare to Pinterest
Posted by highway163 at 9:27 AM 0 comments

Why the bullet holes?

Why? No reason...
Email ThisBlogThis!Share to TwitterShare to FacebookShare to Pinterest
Posted by highway163 at 3:00 PM 0 comments