Continuing my lecture-prep on Emerson, I have been drawn back to his essay, “The Over-Soul.” Here are a few quotations that rose to great me this morning:

“Man is a stream whose source is hidden. Always our being is descending into us from we know not whence” (p. 189).

“I am constrained every moment to acknowledge a higher origin for events than the will I call mine” (p. 189).

“When I watch that flowing river, which, out of regions I see not, pours for a season its streams into me, I see that I am a pensioner; not a cause, but a surprised spectator of this ethereal water; that I desire and look up, and put myself in the attitude of reception, but from some alien energy the visions come” (p. 189).

“We live in succession, in division, in parts, in particles. Meantime within man is the soul of the whole; the wise silence; the universal beauty, to which every part and particle is equally related; the eternal ONE” (pp. 189-190).

“We see the world piece by piece, as the sun, the moon, the animal, the tree; but the whole of which these are the shining parts, is the soul” (p. 190).

“All reform aims in some one particular to let the great soul have its way through us; in other words, to engage us to obey” (p. 191).

“The influence of the senses has, in most men, overpowered the mind to that degree, that the walls of time and space have come to look real and insurmountable; and to speak with levity of these limits is, in the world, the sign of insanity. Yet time and space are but inverse measures of the force of the soul” (p. 192).

“[The soul] converses with truths that have always been spoken in the world, and becomes conscious of a closer sympathy with Zeno and Arrian, than with persons in the house” (p. 194).

“[The over-soul] arches over [individuals] like a temple, this unity of thought, in which every heart beats with nobler sense of power and duty, and thinks and acts with unusual solemnity. All are conscious of attaining to a higher self-possession” (p. 196).

“We distinguish the announcements of the soul, its manifestations of its own nature, by the term Revelation. These are always attended by the emotion of the sublime. For this communication is an influx of the Divine mind into our mind” (pp. 198-199, emphasis in original).

“The moment the doctrine of the immortality is separately taught, man is already fallen” (p. 201).

“The soul is true to itself, and the man in whom it is shed abroad cannot wander from the present, which is infinite, to a future which would be finite” (p. 201).

“The only mode of obtaining an answer to these questions of the senses is to forego all low curiosity, and, accepting the tide of being which floats us into the secret of nature, work and live, work and live, and all unawares the advancing soul has built and forged for itself a new condition, and the question and the answer are one” (p. 201).

“The intercourse of society, -- its trade, its religion, its friendships, its quarrels, -- is one wide, judicial investigation of character” (p. 202).

“That which we are, we shall teach, not voluntarily but involuntarily” (p. 203).

“Among the multitude of scholars and authors we feel no hallowing presence; we are sensible of a knack and skill rather than of inspiration” (p. 204).

“[The poet’s] greatest communication to our mind is to teach us to despise all he has done” (p. 205).

“Converse with a mind that is grandly simple, and literature looks like word-catching” (p. 206).

“Deal so plainly with men and woman as to constrain the utmost sincerity and destroy all hope of trifling with you” (p. 207).

“When we have broken our god of tradition and ceased from our god of rhetoric, then may God fire the heart with his presence” (p. 207).

“The heart in thee is the heart of all; not a value, not a wall, not an intersection is there anywhere in nature, but one blood rolls uninterruptedly an endless circulation through all men, as the water of the globe is all one sea, and truly seen, its tide is one” (pp. 208-209).

“More and more the surges of everlasting nature enter into me, and I become public and human in my regards and actions” (p. 210).

“The universe is represented in an atom, in a moment of time” (p. 211).
Email ThisBlogThis!Share to TwitterShare to FacebookShare to Pinterest
Posted by highway163 at 11:08 AM 0 comments

Preparing for a lecture on Transcendentalism, I enjoyed an opportunity to review Emerson’s beloved essay, Self-Reliance. This is the kind of stuff my mom insisted I should study when I was a kid, but it reads much differently decades later. Some of its impact has slackened, some has sharpened, and some has appeared all at once anew. I’m using an old Apollo Editions collection, so I cannot account for the exactitude of the quotations, but I’m happy to share nonetheless.

Ne te quaesiveris extra: “Do not seek outside yourself” (p. 31).

“To believe your own thought, to believe that what is true for you in your private heart is true for all men, -- that is genius” (p. 31)

“In every work of genius we recognize our own rejected thoughts; they come back to us with a certain alienated majesty” (p. 32).

“We but half express ourselves, and are ashamed of that divine idea which each of us represents” (p. 33).

“How is the boy the master of society; independent, irresponsible, looking out from his corner on such people and facts as pass by, he tries and sentences them on their merits… You must court him; he does not court you” (p. 34).

“Society everywhere is in conspiracy against the manhood of every one of its members… Self-reliance is its aversion” (p. 35).

“Good and bad are but names very readily transferable to this or that; the only right is what is after my constitution; the only wrong what is against it” (p. 36).

“A foolish consistency is the hobgoblin of little minds” (p. 41).

“The voyage of the best ship is a zigzag life of a hundred tacks. This is only microscopic criticism. See the line from a sufficient distance, and it straightens itself to the average tendency” (p. 42).

“All history resolves itself very easily into the biography of a few stout and earnest persons” (p. 44).

“What is the aboriginal Self, on which a universal reliance may be grounded?” (p. 46).

“The inquiry leads us to that source, at once the essence of genius, the essence of virtue, and the essence of life, which we call Spontaneity or Instinct. We denote this primary wisdom as Intuition, whilst all later teachers are tuitions” (p. 46).

“We first share the life by which things exist and afterwards see them as appearances in nature and forget that we have shared their cause” (p. 46).

“All my willful actions and acquisitions are but roving; -- the most trivial reverie, the faintest native emotion, are domestic and divine” (p. 47).

“The relations of the soul to the divine spirit are so pure that it is profane to seek to interpose helps” (p. 47).

Man “cannot be happy and strong until he… lives with nature in the present, above time” (p. 49).

“And now at last the highest truth on this subject remains unsaid; probably cannot be said; for all that we say is the far off remembering of the intuition… it is a perceiving that Truth and Right are” (pp. 49-50, emphasis added).

“Why then did we prate of self-reliance? Inasmuch as the soul is present there will be power not confident but agent. To talk of reliance is a poor external way of speaking. Speak rather of that which relies because it works and is” (pp. 50-51).

“We fancy it rhetoric when we speak of eminent virtue. We do not yet see that virtue is Height, and that a man or a company of men, plastic and permeable to principles, by the law of nature must overpower and ride all cities, nations, kings, rich men, poets, who are not” (p. 51).

“I see the same law working in nature for conservation and growth. The poise of a planet, the bended tree recovering itself from the strong wind, the vital resources of every animal and vegetable, are also demonstrations of the self-sufficing and therefore self-relying soul” (p. 51).

“Isolation must precede true society” (p. 52).
Email ThisBlogThis!Share to TwitterShare to FacebookShare to Pinterest
Posted by highway163 at 8:11 AM 1 comments

Shameless Plug: The Goal is to Live Again

Many thanks to Birmingham ABC affiliate reporter Robert Richardson for sharing a story they produced about Anniston, Alabama's Goal Post neon sign, which features some footage I shot several years back: 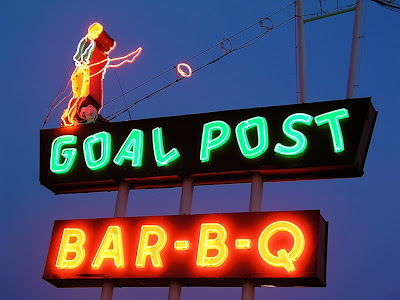 Would you believe it? Folks were emailing me yesterday about the demolition of the Anniston [Alabama] Goal Post Bar-B-Q sign - and now there's word of a reprieve! Once the mayor heard about the imminent destruction of a local landmark, city workers were dispatched to place the sign in storage. The Anniston Star offers some historical context:


Tod Swormstedt, founder of the American Sign Museum in Cincinnati, told The Star in September that the sign is well known among collectors and historians, and its custom-made, animated neon is a reflection of the happiness and prosperity of post-World War II 1950s.

Now there's time for someone, hopefully in town, to figure out a way to keep the sign lit somewhere nearby. San Jose, California did the same with the Stephens Meat Products sign (although that sign has not fared well in recent years). With a little luck, folks will enjoy another chance to see the Goal Post in action one day.


Geni Certain shared the distressing news that the Goal Post Bar-B-Q's animated neon sign, which features a kicker punting a ball, is being dismantled. A short piece in the [Alabama] Anniston Star features the YouTube video I posted some years back, which offers me at least a little solace.

One of the goals of my (slowly) growing collection of animated sign videos is to inspire folks to explore these "potent bursts of raw technological enthusiasm" while they stand today. At the same time I recognize a sadder outcome that, for some, these videos may be the only records that remain. As ever I am drawn to William Gibson:


"I shot one in San Jose an hour before the bulldozers arrived and drove right through the structural truth of plaster and lathing and cheap concrete."

I can't recall any such dramatic bulldozer moments in my years of architectural wanderings, but I do remember my last drive through Alabama, thinking, "I should get out there and see this sign again, maybe shoot it in higher definition." More pressing engagements called me away, and I made the right call in forgoing that opportunity. Still, you never know when your last visit becomes your last chance.
Email ThisBlogThis!Share to TwitterShare to FacebookShare to Pinterest
Posted by highway163 at 11:34 AM 0 comments

Seems like I've yet to greet the new year...

Well, I'm back from Florida, teaching a three-week public speaking course, and dreaming of a swell 2014. David Terry and I are burrowing through revisions of our DPRK essay, and I have hopes that an internationally co-authored book project is finally coming to fruition. This year's travel plans range from Baton Rouge to Finland (with a possible side trip to St. Petersburg, Russia). Of course I'll also be tackling new lecture projects for the honors humanities program. This semester's topics:


I presented the arts lecture during my last sabbatical; all the others will be written new from scratch. As ever, I anticipate a constant hybrid of exhaustion and exuberance. Building these presentations will draw from time I'd otherwise devote to blogging - but the results, I hope, will be worth the hassle.
Email ThisBlogThis!Share to TwitterShare to FacebookShare to Pinterest
Posted by highway163 at 7:24 AM 0 comments