Lexus ad: "The world is not so complex" 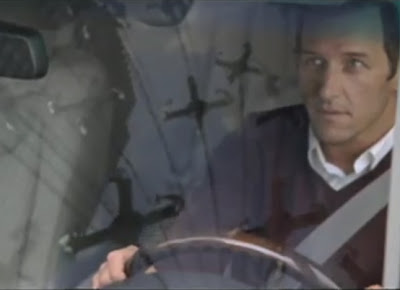 The spot begins with a downtown traffic jam, horns honking amid a canyon of gray towers.

The gray Lexus is stuck.

A male driver (wearing the nondescript uniform of commercials pitching to the upper middle class) lets his head fall back against his seat. He's mildly annoyed but not really frustrated.

His gaze runs over the weather forecast for Houston on a Monday.

His fingers caress a button near the gear shift.

The weather has been replaced by a GPS map depicting downtown. The driver is alerted to an accident on 6th Street.

Then the ad begins to demonstrate the omnitopian practice of mutability.

"Because we can't reinvent traffic..."

From above, claws descend upon the cars, pulling those around him toward the sky. A taxi, an ugly van, all the cars are yanked off the ground.

"...we reinvented how the driver navigates around it."

Even the buildings that surround him are hosted aloft.

The buildings drop pieces of their foundations as they ascend, but the road ahead is clear, ordered.

The driver scans his dashboard again, itself a panorama of technological efficiency.

The driver parks next to a "Vinyl Store" in an old building. The scene is horizontal, none of the shifting axes or perspectives of the previous scenes. A few buildings remain in the background, distant.

Thanks to Lexus technology, the complex city mutates into a path for his personal pleasure.

Check out the commercial: Lexus City

Also take a look at a 2010 Palm ad: Life Moves Fast
Email ThisBlogThis!Share to TwitterShare to FacebookShare to Pinterest
Posted by highway163 at 7:26 AM