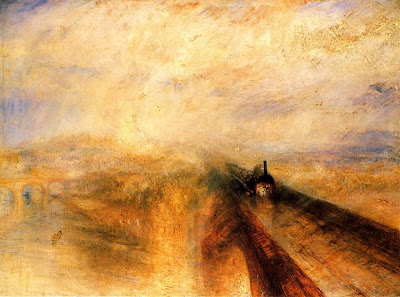 This is the second in an occasional series of posts about modern art. These days, I'm focusing on nineteenth century imagery related to urban life. My ideas are hardly formed; these are just musings, really. All the same, I'm happy to share them with you.

Velocity marks the modern landscape, that spatial environment produced with the nineteenth century advent of high-speed mass transportation, such that we can hardly imagine a contemporary city that fails to convulse with movement. Artists' efforts to depict the modern urban world have therefore imagined the city as a site of perpetual mobility, where locales of stasis sometimes convey the existential angst of death, surveillance, and alienation. Critiques of the city, of course, flowed freely from nineteenth Romanticists whose palliatives against Enlightenment excesses demanded an accounting of our hubris to believe that well planned cities produce well planned lives.

J.M.W. Turner, the British Romanticist, illustrates the concerns shared by some artists about the new city with his canvases that depict humanity's travels/travails amid the sublime power of the natural world. Turner's 1844 Rain, Steam, and Speed (The Great Western Railway) [shown above] balances a Roman-style arch-bridge and a humble fishing boat on the left with the explosive presence of a locomotive that rips through the foreground toward the viewer. London, behind, is lost to the mist and smoke. Like Turner's 1838 Fighting "Téméraire" Being Tugged To Her Final Berth to be Broken Up [wiki entry], we find no pleasure of power in this image but see instead a sense of loss. The modern era catches us all off guard, transforming the world. We bob in our own boats, fearing we may too be washed overboard or broken up in some other way.

How little could Turner and the Romanticists imagine the perfection of urban renewal in the latter half of the nineteenth-century. The growth of intra-city streetcar and omnibus lines, not to mention the expansion of commuter trains that enabled the rise of suburbs, completed the modern dislocation of formally related activities. One could live in one district and work in another, shopping entirely elsewhere, without caring to know one's neighbors in any of these environs. Indeed, the detachment of constant travel marked, particularly among the merchant class, the promise of progress and the improvement of one's personal economy.

At the level of government, such mobility and dislocation added more: a justification and implementation of complex reorganizations of urban life. Romantic or otherwise radical critics could no longer block the narrow lanes with barricades, either in their art or with their bodies; the ancient passages of the medieval city provided no sanctuary, no place for conspiracy. Thomas More presaged this disciplinary utopia when, describing the role of communal labor in a healthy society, he emphasized, "[t]here are . . . no secret meeting-places. Everyone has his eye on you."

This utopia became increasingly realized in the era of Haussmannization, when Napoléon III ordered the transformation of Paris by calling for a military array of boulevards whose seemingly infinite sightlines would enable not only an efficient sewage system and propagation of green spaces but also the bureaucracy of human-data analysis and rapid reaction police forces, the all-seeing eye of ubiquitous power. Some artists of that period, most notably those who augmented mid-century Realism with the ambiguity of emerging insights into psychology and experimental efforts at symbolism, crafted visions of the city whose orderly designs appear to rest upon a perpetual geography of fear. 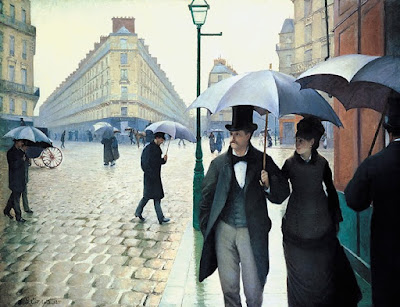 Gustave Caillebotte's 1876-77 Paris Street; Rainy Day, for example, confronts the impact of Haussmannization by literally splitting the scene with a lamppost, producing two columns of the city. The Paris to the right is nearly filled with three figures occupying a shared horizontal frame. Advancing toward the viewer, a man and woman walk together. They are shown almost entirely, though we cannot see their feet. The man shares his umbrella with the woman who holds unto his arm. Their gazes are directed toward the left, looking outside the scene. Walking toward them, his back to the viewer, another man (cut almost in half by the Caillebotte's frame) appears to lack space to maneuver around the pair. Maybe he will bump into the woman and a moment of unexpected interaction will ensue. The city behind is similarly complex with a tumble of buildings set beneath a gray sky.

We may contrast this version of Paris with the alternative perspective on the left of the canvas. There, one finds three primary groupings: a duo of men in the left foreground, a man and a woman carrying separate umbrellas in the middle background, and a solitary man walking nearly into the lamp to the right. Collectively, they form a triangle rather than a horizontal frame. Each point is safely isolated; all are free from any likelihood of interaction. We see them entirely, their bodies submitted to our gaze, and that of another with whom we identify. Looming above the people in the left-hand scene, another triangle reflects the strollers' ordered positions: a multi-story building topped with an apex that resembles a human eye. The building is the new city, an impossible perspective of conflated space and perpetual sight. Gathering both frames together, the eye looks upon man and woman who are hidden only by one shared umbrella. All walk; the only other forms of transportation in this version of Paris are two horse-drawn carriages. None may escape the urban gaze of authority.

(Public domain image from Wikipedia Commons)
Email ThisBlogThis!Share to TwitterShare to FacebookShare to Pinterest
Posted by highway163 at 1:05 PM