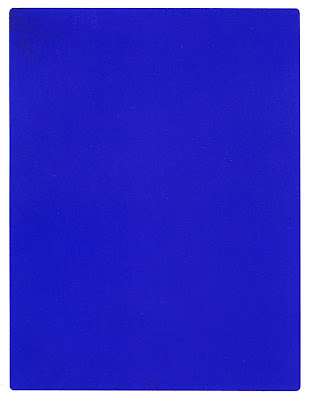 Lately I was asked to study some works by French conceptual artist Yves Klein. Once I realized that I was not searching for "Eve Klein," I discovered a fellow who represents a turn toward the realm of contemporary art that I have yet to fathom. Undeniably, Klein brought an intriguingly thoughtful perspective to his works, sometimes labeled (the good folks at Wikipedia inform me) as neo-dada and sometimes as early post-modern. Among his achievements include the popularization of a particular hue called International Klein Blue, along with works that reveal experiences of "the void," playful photomontages, and performance installation pieces that often mocked artistic conventions, most notably the idea that a gallery visitor enters the scene to, you know, see something.

Checking out his Blue Monochrome (1961, Dry pigment in synthetic polymer medium on cotton over plywood) at New York City's Museum of Modern Art's website, I'm told that Klein's IKB sought to evoke "the immateriality and boundlessness of his own particular utopian vision of the world." OK. But frustratingly, I have no idea how one could affirm or refute such a statement. As we shift beyond representation into the allegedly pure "experience" of contemporary art, we seem to enter the world presaged by Marcel Duchamp's L.H.O.O.Q., in which the artist's vision -- the choice to say, "this is art" -- is freed from the risk of evaluation.

Art patrons choose to value this hue of blue as gloriously revolutionary and that hue of blue as hopelessly pedestrian, and critics become akin to fashionistas celebrating a hemline one year only to rebuke the same style as "so last season" the next. I fear that non-initiates such as myself are compelled to either adopt the trendiest narrative ("Oh, don't you see Klein's utopian vision? Isn't it obvious? It's right there!") or else be resigned always to stand outside the gallery with its assortment of free crab cakes and sparkling wine, now that contemporary art seems to appeal mostly to those within its shrinking domain.

Once more, mine is the response of one who is genuinely ignorant of the meaning of something like Blue Monochrome or IKB 191 (above). Even after reading a fair amount of commentary on Klein's work, I feel adrift among all those competing narratives. Always I return to William Gibson's notion of "consensual hallucination" when I think about the time and effort that contemporary artists must spend crafting their "artist's statements," the ones that explain why we are staring at canvas after canvas of blue (or contemplating a dead shark in formaldehyde, or whatever). Something seems to be lost in this turn.

Still, while the world of visual arts may have abandoned the potential to create scenes that convey anything that two people can agree that they see simultaneously (I'm flashing on a Simpsons line, "Oh, it's a donkey!"), all the work that goes into writing about these productions -- by the artists, the critics, the buyers, the sellers, the curators, and of course, always the academics -- has at least inspired a golden age in the written word. Oh, and blog posts.

(IKB 191 image borrowed from Wikipedia commons)
Email ThisBlogThis!Share to TwitterShare to FacebookShare to Pinterest
Posted by highway163 at 10:58 AM

I think there's a lot to be said for crab cakes and sparkling wine.