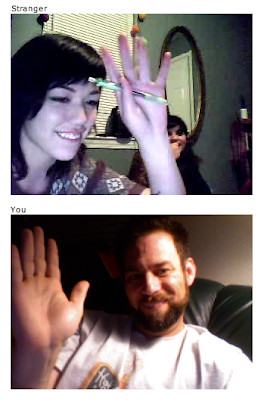 That cheesy seventies flick Logan's Run is proving to be a pretty good predictor of the future. I'm not referring to tacky DayGlo mumus or that whole "death after thirty" thing. I'm talking about the film's depiction of The Circuit. Remember that scene?

"Imagine a world in which you need never be alone. You touch a switch, turn a dial, and the perfect lover steps into your arms" [film trailer link].

The fantasy of instant connection, with interactive vividness and editable boundaries, is Logan's Run's promise of the 23rd century. Certainly it'll be awhile before we can shop for real live humans, inviting strangers to step into our rooms. But at least there's Chatroulette.

Check out my video of Chatroulette encounters [select HD for best quality]: http://www.youtube.com/watch?v=q-JBOtyO4tQ

The wildly popular micro-social networking site, growing so rapidly that some analysts believe it's already passed the so cool-so lame threshold, has shimmered on my mental periphery for a few weeks, but I only had time last night to play.

In case you're unfamiliar with the site, Chatroulette is a bare bones webcam network, supposedly invented by a Moscow teenager [NYT story], that lets you hook up with random strangers worldwide for Single-Serving Friendships, lightly voyeuristic displays, or disturbingly kinky encounters.

Feeling mildly freaked? Or annoyed? Or bored? Click to the next one.

I messed around with Chatroulette for a few hours last night. Jenny, of course, was not impressed. She looked over my shoulder for a few minutes and then marched off to bed, announcing that the whole idea creeps her out.

The next morning, I'm flipping through screen captures I surreptitiously grabbed with my laptop (it's amazing how easy it is to sexualize human-computer interaction). The screen-grabs are souvenirs of fellow-travelers willing to share after-hours microbursts of connection with me on the Circuit (one New York Magazine author citing the "Twitter-fication of face-to-face interaction" [link]). I can still see them.

Oh, and the penises. Lots of penises. I definitely remember a few of those. I'm writing this post now with the application open, occasionally peaking at the Chatroulette page for inspiration. About one in 20 clicks yields some guy's junk, usually being furiously yanked. Sometimes the scene is less overt though: maybe an underwear-covered crotch or a set of exposed abs, flexed, waiting...

Most Chatroulette clicks produce video-snapshots of grainy faced guys sitting alone in the dark, a hand stretched out of view. Wait long enough and one will stare intently into the camera. A two-tone chirp and then a red-text "Hi" pops up in the chat window.

Where's that "Next" button?

A brief wait as the next link is made. Then -

A hipster surveys me and renders his judgment: "a big bushy beard." It takes me a while to connect the audio, but this dude's not in the mood for difficult dialogues. He's made his evaluation and there's nothing left to say. I decide to shave a bit later, realizing that I can't schlub my way around here. Most early adopters have already learned to frame themselves memorably. Not professionally in any sense, but with some style.

While the site has been active for about three months, it's only crested public consciousness over the past few weeks. And I just know a hundred local television affiliates are racing to wrap up their newest iterations of "Do You Know What Your Kids Are Doing Online?" stories, with Chatroulette serving up the tangiest sweat of moral panic.

A photo this time: a bug-eyed infant. The sign reads "T**s for hungry baby." There are a lot of those actually, men and boys trolling for flashers. One guy writes, "I'll do ANYTHING for boobs." I come across a couple women who seem willing, but I don't care enough to ask. A Guardian writer opines [link]: "we seem to spend more time in our tribes and yet [are] happier than ever to let strangers glimpse our lives." No thanks. Not that kind of glimpse.

A teenage girl twirls her hair. She creases her brow, a nanosecond judgment, and the screen goes black.

> Your partner disconnected. Press "Next" to find a new person!

I get a lot of those, which is a little depressing. But I'm no better. Lots of folks suffer the indignity of my disconnects too, and sometimes for the silliest reasons. For example, I click-diss people who lack a sense of composition. That's right: new media demand new aesthetics. Position your head in a tiny quadrant of the screen? You won't last long with me. Too much negative space weirds me out.

Another penis. Oh, and this time he's going for a money shot.

A girl at a party. She smiles and lights a joint, blowing smoke in my video-screen face. This one's much cheerier than the girl who castigated me three or four clicks back. One look and she turned to her pal, pronouncing, "This one is quite elderly," before addressing me directly: "Why are you here with us? Think of your daughters." A few clicks later and I'm at another party of teenage twinks. One squeals, "Dad! I thought I told you to stay off this thing!"

Chatroulette's night rhythm is a stream of eye-blink moments. Automate the next-click option and one stranger after another peers into my life. An Internet Tough Guy menaces, "What the f*** you lookin' at, man?" Click. A girl in panties lays next to her naked boyfriend. Click. A blurry, pixelated dude, his face eerily luminescent, like he's beamed in from a 60s'-era lunar broadcast, dangles a bag of weed from his fingers. Click. An older guy nods and offers a wan thumbs-up. Click. A hottie wearing a tight leather mini-skirt -

Ooops! What did I just miss? Oh well, no time for regrets. Now some guy is hoisting a squeeze-bottle. It's brimming with a thick green substance. He's about to squeeze. He smiles.

> You disconnected.
> Looking for a random stranger...

Email ThisBlogThis!Share to TwitterShare to FacebookShare to Pinterest
Posted by highway163 at 12:27 PM

Yes, I definitely think this phenomenon is creepy to say the least. Your writing on this is great but even it creeps me out. Partially, of course because of the crude men exposing themselves but also partially because of that flicker of a second when you first see someone you don't know - that awkward first second and then they click you off - or they're just too creepy for you to not click them off.

The whole thing just feels very wrong, to me.

You know that phrase "it's all fun and games until someone loses an eye"? This is it for me. Sure, it could be entertaining to some to watch a group of college kids getting goofy playing "quarters" or some other drinking game, but whoa, so much wrong can come from it too. I'm far from being a veteran of social networking sites, but it seems to me there is some modicum of civility. Sure there are rants of "R" rated content, but my causual observance is that for the most part, people behave. I see links to report "naughty" stuff to the FB team and that is fine, maybe even appropriate for the venue. This application however, is fraught with problems. I agree in Jenny's comment of its "creepiness". What comes to mind for me is what do you do when you witness a crime. I'm not talking about minors with booze or someone smoking dope, I mean child abuse, torture, terrorist activity (Daniel Pearl?). Many of these perpatrators like audiences for various reasons- seems like the perfect venue for them. Also, what about the violation of the concious of the person who views, maybe by accident, maybe not and sees some heinous crime. There must be internal anguish and torment- by viewing some horrible act, I think the law could say you are in some facet, an accessory to the act. Even though you may not literally be charged, where do you "put" that experience and how does it affect you. I am opposed to censorship, but this does beg the question, is this akin to yelling fire in a crowded theatre, just on a technologically advanced scale?. From what little I know about this, it seems too over the top for me and I do have deep reservations if/when this hits the mainstream. I agree Jenny, it feels very wrong to me too...

Jenny, as ever, thanks for your comments. I appreciate you taking the time to reflect on this topic that is fascinating to me (even as it is creepy to you).

Alex, I dig your critique - and I recognize the implications you raise.

Indeed, just last night I was playing again with Chatroulette, sitting on my easy-chair with my beloved cat Artemis lounging on my lap.

"What a sweet scene," I thought. Me stroking a purring, happy cat while typing with strangers about - believe it or not - some kinda cool stuff. [a rare experience on Chatroulette, to be sure]

Then I thought (I can hardly bear to imagine this...): What if I came across another person on this medium who was being (to put it gently) far less kind to an animal?

Seeing such a crime - recognizing that it was staged for the benefit of voyeurs, accepting that I too join that affiliation when using Chatroulette- Well, the idea sends shivers.

Already there's an urban legend about somebody committing suicide on a Chatroulette-linked webcam. Surely an apocryphal tale. But you're right: This is a site with absolutely no protection. It's a profoundly unsafe space.

For some folks, the experience is exhilarating. But the spectre to which you refer is undeniably real and frightening.

Ok, I finished reading "City Ubiquitous" and the only issue I have is with the Convergence chapter. Sometimes I wondered whether you were reporting on what you read, or what you really felt.
I was listening to my iPod on bus on the Garden State Parkway and maybe it's a problem with my iTunes, but my music didn't take me anywhere. I was looking at the aftermath of Snowmageddon 2010, and it was beautiful.