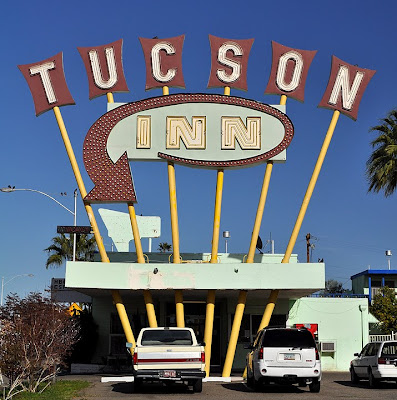 Jenny and I just returned from our weekend in Tucson, where we spent most of our time hiking Saguaro National Park. We'd planned our trip on a whim when Jenny's iPhone "dinged" a decent price for Southwest tickets to Arizona. Weirdly enough, we'd been a bit snippy with each other at that moment, and the idea of a mini-vacation to reconnect seemed like a perfect idea. So we booked the tickets right then. 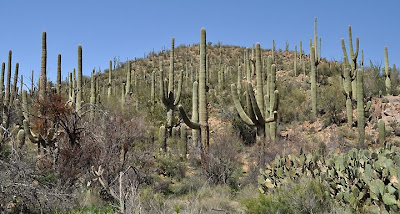 Arriving in mid-morning after waking at an ungodly hour, we promptly made our way to a Little Anthony's, one of those 50s-diners. You know the type: black and white tile, James Dean posters, car shows... I tried their Recession Special, which offered a tasty burger, fries, soda, and small Sundae for six bucks. It was a pretty good deal. From there, we made our way to the east park. That's right, Saguaro National Park spreads out east and west of the city. As per our tradition, we started with the delightfully cheesy orientation video before the main event. At last, we began to thread through groves of towering cacti. 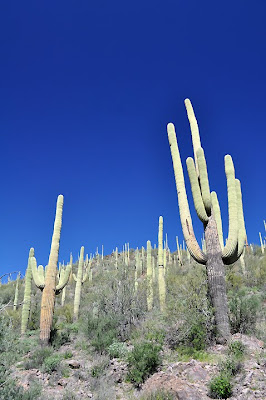 We'd come for the Saguaro, of course, to see these icons of the West we'd recognized even as children in Florida. For us - for a lot of folks, I imagine - a howling coyote, a red butte, and a spiky Saguaro form a mythical triangle of old movies, storied road-trips, and collective memory. We'd flown and driven a long way to see them up close. And then there they were. Gnarled, weird, awesome. 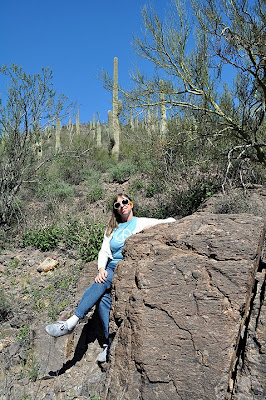 Jenny, as you may know, loves things that tower over her, so she was enchanted with these green monsters that sometimes climb two or three stories. The gangly "arms" of the cacti point upward most of the time, but sometimes Saguaro are more strange. Once in a while, we'd spot a cactus that seemed like a mutation, with arms that curved downward or with bodies that looked like they sprouted out other bodies like a mad scientist's experiment run amok. 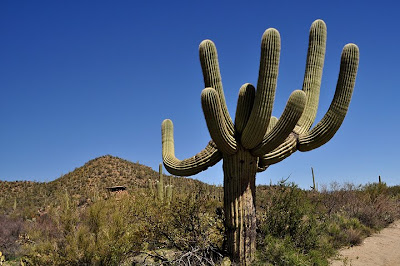 Our first hike was Mica View, a welcome respite from a congested morning of planes and cars. Once we hit the rocky trail, Jenny and I were alone at last, free to make our own way on the rocky sunburned trail. The path was clear enough, but sometimes we'd amble along a dusty wash or pick our way through a cluster of Saguaros away from the designated trace. We took pains to avoid the cholla, prickly pear, and other dastardly flora, but they seemed magnetically drawn to us. I started in shorts and flip-flops but quickly saw the wisdom of hiking in long pants and proper shoes (much to Jenny's bemusement). 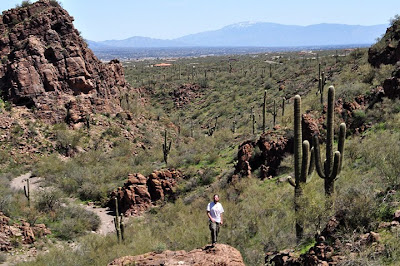 Predictably, our off-trail wanderings got us thoroughly lost. Thank goodness for the satellite views provided by our trusty iPhones! I felt a little silly depending on such high-tech luck, but as clouds began to roll in from the west, I swallowed my pride. As we made our way back to the trail, Jenny spotted a loping jackrabbit whose big ears called for our camera. Too quick, he bounded away. Eventually the clouds grew sufficiently dense for us to head back to town in search of the Flamingo Hotel (really a motel) for brief nap. Happily, the first of several for this trip. 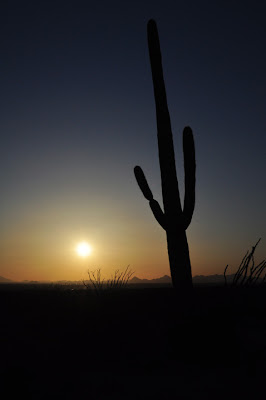 A few hours later we were back at the park, waiting for sunset. A cool breeze had scooted all the clouds away, leaving a purple and pink sky. The sun sank behind Tucson and the mountains beyond, and a silvery crescent moon rose. We snapped some pictures in the orange light, scampering for the best views. After nightfall, Jenny and I hiked a bit more, searching for a cactus that seemed right for another of our light-painting experiments. I was grateful for Jenny's recommendation that we pack our flashlights and gels for this trip, because the unearthly effects we captured - especially with the stars pinwheeling around Polaris - were worth every grunt from lugging our gear through the airports and down the trail. 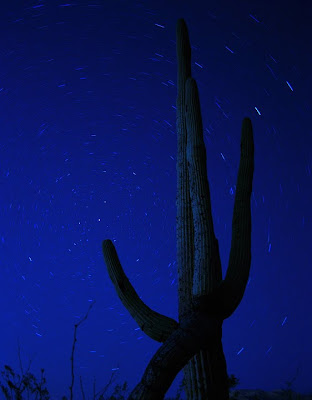 The next morning, we slept in before grabbing breakfast at an unexpected place: Waffle House. As I've written elsewhere, this 24-hour chain is a Southern tradition, but Waffle House has also grabbed a toehold in some western states. Next stop: the western park. Now I wasn't sure what to expect, but I can say unequivocally that this direction was even more impressive than the eastern site. The panoramas of Saguaro are even more awesome out there. 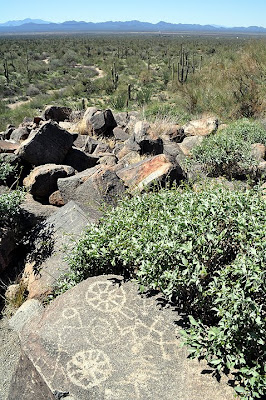 We began with a mellow hike up Signal Hill, looking to spot Hohokam petroglyphs, before taking some time to wander away from the trail once more (we never seem to learn). This time we discovered just how invisible a camera bag can be once it's put down next to a cactus. "Which cactus?" "The green, spiky one!" Luckily it wasn't long before we gathered our stuff again and returned to the gravel and dirt road. Feeling every bump and jerk under our rental car's tires, I waited for the inevitable scrape of cactus spines against the paint job. And we both understood why the dude driving a Lexus in front of us crawled at no more than five miles an hour. Kicking up clouds of dust, we passed him and found our own comfortable cruising speed. 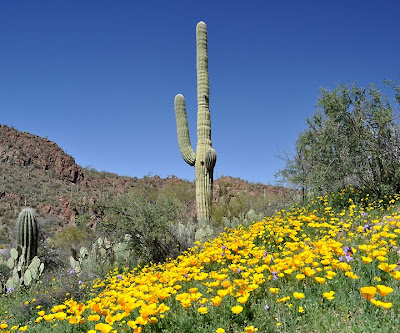 While we rounded a hill, Jenny then spotted a sea of purple and yellow flowers. Oh, yeah! Spring in Tucson. We'd hardly hoped that we'd see much in bloom this early in the year, aside from a scattering of orange blossoms on a handful of cacti, but colorful patches of life fluttered in the breeze on this hillside. Jenny sought a perfect perch to compose her shots while I managed to rediscover my dread of the horribly misnamed "Teddybear Cholla." Picking the spines out of my flesh, I looked down to notice that my favorite pants were spattered with dark purple splotches. I tried to avoid stepping on the flowers but clearly wasn't careful enough when kneeling to find my own favorite compositions of cactus, mountain, and sky. I didn't mind too much, though. Now these pants have clearly been somewhere. 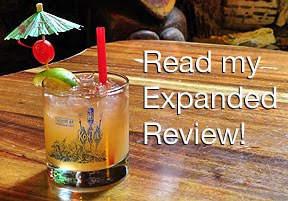 As the heat rose, we returned to town for a break at Kon Tiki, an old school Polynesian Pop Paradise that has stood for decades as a timewarp to the early 1960s. The city had grown around this place, but the vibe still pulsated with American fantasies of the South Pacific. Outside the sky was a crisp, sharp blue, while inside the atmosphere was dark and mysterious, a dreamy phantasmagoria of rum drinks and wooden idols. I tried Kon Tiki's basic and house Mai Tais, neither of which I could recommend to a connoisseur. Even so, Jenny appreciated the fact that we could enjoy a meal away from the bar, and we both dug the surreal break from nature. 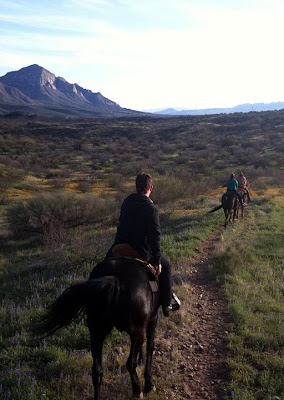 Returning outside, blinking languidly under the harsh light, we headed back out of town, this time for a horseback ride at Pusch Ridge Stables. It'd been years since Jenny and I rode, but the folks working there had no problem selecting horses that aligned to our personalities (my attitude being a bit snippy, thanks to molasses-slow traffic leaving Tucson). After being taught how to "steer" our new-found friends ("Sugar" for Jenny; "Zeke" for me) and being reminded not to allow them to eat too much along the trail, we set out in a line of five. Under the growing shadows of sunset, we sauntered atop a ridge dotted with more yellow and purple flowers. It took little imagination to forget that a highway was nearby. A couple hours later, as pink clouds strung themselves below the sun, we returned to our car and headed back to our motel for the night. 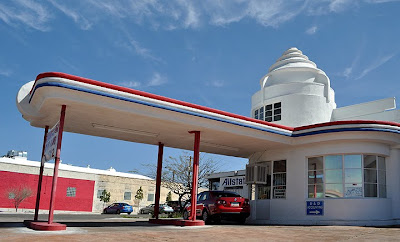 On our final morning, Sunday, we continued our tradition of sleeping in - rising well after the gladdening departure of a hassle of obnoxious partiers who woke us at two in the morning. We started our day with some urban photography, shooting a Ming-the-Merciless-type deco building right out of William Gibson's "Gernsback Continuum." Then hunger pangs drew us to El Charro Cafe, the famed Mexican restaurant whose brunch buffet of breakfast items and heaping plates of corn-husk carnivore goodness appealed to our varied appetites. 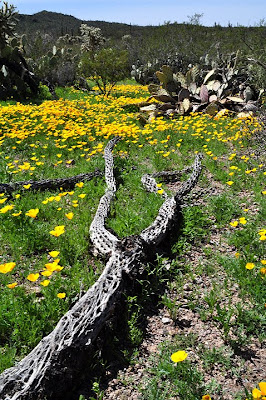 Once more at the park's west side, we returned to Jenny's favorite hillside spot to take more pictures of flowers. We also took a hike to Valley View Overlook Trail to enjoy another expansive panorama of cacti filling our gaze from west to east. The wind had died down, so the heat was a bit more heavy this day. Both of us felt sluggish, perhaps recognizing that our little trip was almost over. Slowing down to savor each vista, we nonetheless admitted that the site of cactus - just days before, a mental vacation - had become a bit more common to us now. Still, we loved stopping occasionally to hear the wind that whistled through the green spines of the Saguaro. No pictures I'd seen could prepare me for the pleasure of that sound. 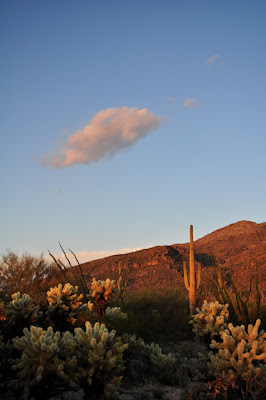 An afternoon nap back at the motel (Jenny and I are suckers for consistency) and we drove to the park one final time for sunset. The clouds and haze conspired against us this time, and we couldn't quite get the photographs we'd planned, but we had to admit that a lousy dusk here was better than most other places in our regular lives. Dinner was at Daisy Mae's, an honest open-fire mesquite steakhouse on Tucson's outskirts. We flipped through pictures and chatted while preparing ourselves for the depressing duties of packing and departing early the next morning. 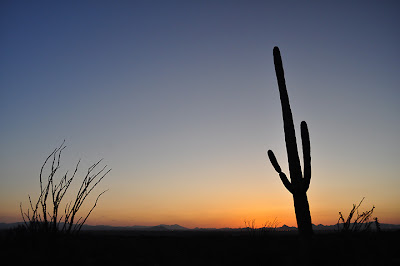 For us, Tucson is cactus and hiking and sunsets, which leaves so much more to have discovered. As with all great trips, we concluded this one with the same promise: We're going back.

(Photographs by Andrew and Jenny Wood)
Email ThisBlogThis!Share to TwitterShare to FacebookShare to Pinterest
Posted by highway163 at 8:45 AM

Wonderful! I felt like I was really there capturing photographs on the hillside

Wonderful! I felt like I was really there, capturing grandeur on the hillside.

I think I need to add this to my list of places to visit!