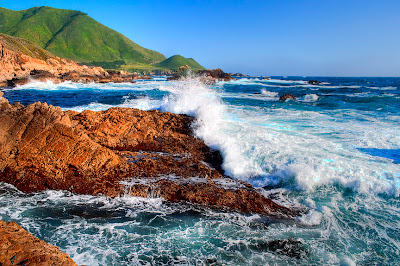 Jenny and I celebrated our 22nd anniversary this past weekend by driving south to Carmel and spending the night at the Tickle Pink Inn. Yeah, we stayed at a place called the Tickle Pink. Actually, the lodge was insanely priced beyond our typical budget. But those feather pillows, that complementary welcome drink, the gracious wine and cheese reception (again, free), and an awesome Pacific panorama from our own private deck [click for video view] warranted every dollar we spent. Even so, we barely checked in and relaxed a bit before returning to the Pacific Coast Highway. There's just so much to see in this part of California, with each turn yielding another path through a breezy meadow and down a stone trail to the end of the world. As I've tried to capture with the aid of HDR, this place is awesome. 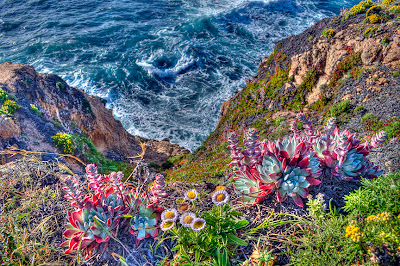 Just about anywhere you to stop along this stretch of Highway 1, you're going to catch a stunning view of nature's power and beauty, particularly when the waves crash against the rocks jutting from the foamy blue surface. A burst of white spray fills the air before draining in tiny rivulets back into the water, and you can't help but imagine this to be the most beautiful place on earth. 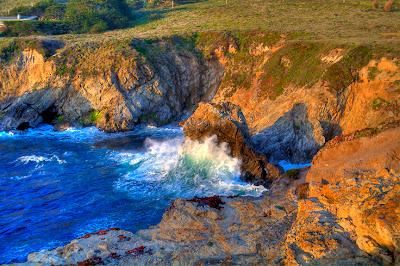 That's how we felt as we drove south, stopping now and again to gaze at the shore. Every once in a while, we'd clamber down to a cove and wonder if we could get back. In fact when the pounding of the waves grew most fierce, we imagined how easy it would be to get caught atop a rock or pushed into a cave. Looking up we'd then dread the effort required to climb back up the steep trail, only to find later that the path wasn't always as difficult as we remembered. Though sometimes it was. 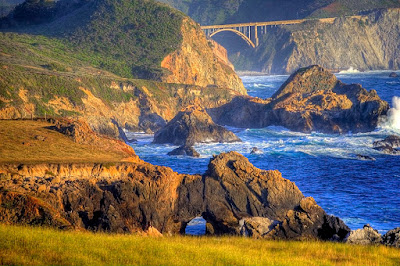 While we wandered along the coast, Jenny was drawn to wildflowers like Queen Anne's Lace, Golden Buttercups, and California Poppies that grow among the dozens of other varieties blossoming upon the cliffs and plateaus. At the same time I was entranced by explosions of spray that sparkled as the surf roared against the jagged rocks. And we both were enchanted by the majestic arch of Bixby Creek Bridge that glowed orange in the distance. Eventually we found our own quiet spot away from the other hikers and waited for the sunset as a dolphin bounded its way across the horizon. 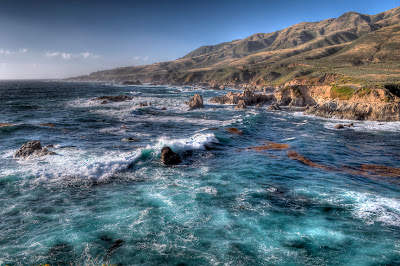 Of course, we stayed later than sunset and then found ourselves racing up the hilly path back to our car, hoping not to miss our dinner reservation. For a while we anticipated showing up late anyway in our gritty shoes and sweat-drenched attire, unable to change into nice clothes. It only took a few minutes driving back toward town, enjoying a much needed breeze, to rethink our plans. We simply switched our dinner reservation to lunch the next day and then returned to the hotel where we could change into appropriate clothes at a more civilized pace and find a restaurant open later. 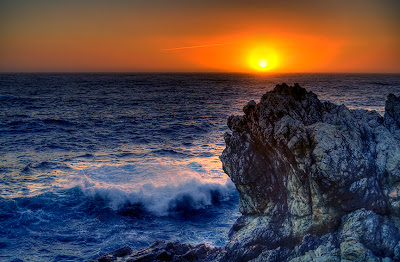 Searching only for a restaurant that stayed open until after nine, we turned into Carmel Barnyard and selected a place called Bahama Billy's. The bulging warped paintings overlooking our table intrigued us, reminding Jenny of Disney cartoons, and my meal was actually pretty good. Jenny, however, was less than lucky; she suffered from the choice to eat raw fish, which is always a crap shoot. Back at the hotel, settling into those mounds of soft pillows on an overstuffed bed, we wondered how we could ever afford such decadence for our own home. And when Jenny drifted off to sleep, I sat awhile on the deck under the ocean breeze and stared at the faint wisps of the Milky Way visible on a nearly moonless night.

The next morning came late for us. We ignored the dawn and lounged for hours in our bed, only moseying downstairs for breakfast because neither of us can stand to miss a free meal at a pricy hotel. We munched on breads and juices and other goodies, and then decided to enjoy a leisurely soak in the hot tub before wrapping up the morning with a nap. What I can say? We got our money's worth at this place. Oh, and wouldn't you know it? After checking out at noon, it was time for lunch.

We returned to the Carmel Barnyard, scene of the previous night's regrettable culinary experiment, this time trying our luck at a place called Lugano Swiss Bistro. While we spotted a wall covered with pictures of famous folks ranging from Clint Eastwood to Michael Jackson who'd come for a meal, we were among the only people there on a Saturday afternoon. I wondered if we'd made another mistake. But a delectable four-course meal of cheese and meat fondue, followed by the necessary chocolate dip for dessert, reaffirmed our faith in Carmel cuisine. Moreover, a tour bus that arrived and released wave after wave of European tourists to join us, transforming Lugano's into one happening place. 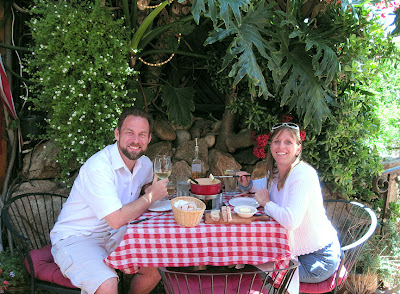 After lunch, and promises that we'd resume a sensible diet upon our return home, we dedicated our afternoon to nearby Point Lobos State Reserve, a remarkable collection of stunning beach views and rambling trails. We parked outside the entrance and walked from place to place, developing an appreciation for a natural treasure. Point Lobos is little more than an hour away from our house, and we were stunned that it'd taken us so long to see it for ourselves. 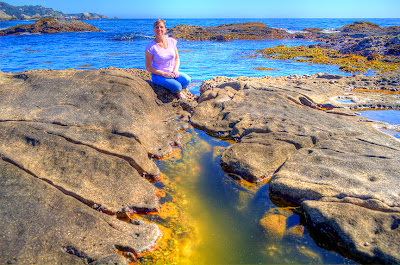 Landscape painter Francis McComas supposedly called Point Lobos "the greatest meeting of land and water in the world" -- as you'd guess, this quote has been borrowed to describe Big Sur, Pebble Beach, and the Entire Monterrey Peninsula. Well, I can't speak to just how "great" this place is, but I can tell you that the Reserve is an essential stop for any person wanting to flee the artificial world. Pounding surf, barking sea lions, flying cormorants, and countless tide pools glowing green under the sun: Point Lobos is a nature lover's paradise. 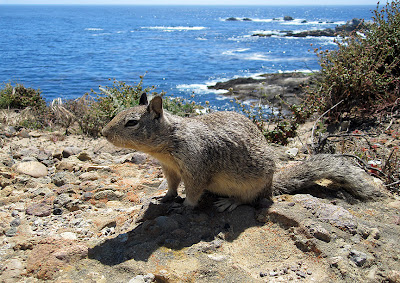 We first hiked to South Point near the ominously named Devil's Cauldron, joining a gaggle of kids and parents who paused to watch sea lions doze on the hot rocks. Occasionally one of the animals would decide it was time to ooze into the water [click for video view], only to change his mind and return to his perch under the sun. One sea lion, however, couldn't quite find a way back onto that rock, and with his every struggle and subsequent splash into the water we'd sigh with empathy. Finally he navigated his girth up the slippery surface, and we all cheered. 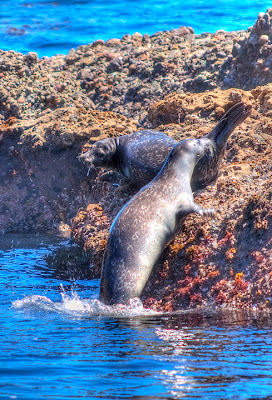 Further south at Sand Hill Cove and Weston Beach, Jenny and I searched for smaller critters, with me hoping mostly to see starfish. Sure enough, we saw a wealth of marine life. Crabs, clicking and clattering, skittered beneath narrow fissures when we got too close and otherwise feasted on algae and the guts of barnacles growing at the edge of gently lapping water. Nearby, purple and green sea anemones undulated in shallow pools, drawing amateur marine biologists to give impromptu lectures. We even saw two starfish, their orange arms drooping downward, hanging upon water-splashed rocks. With each new stop, I'd wonder if we could find just one more. 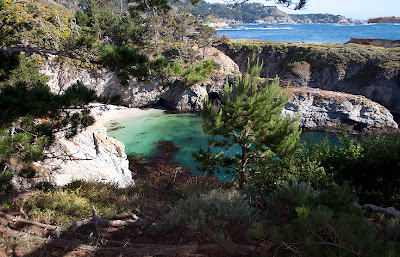 Then we found China Beach, an almost impossibly green cove of delicate sand nestled between high cliff walls, one cut by a tunnel leading temptingly elsewhere. One look and Jenny and I both agreed: we had to check this place out. After a steep descent upon wooden beams that creaked with each footfall, we joined a handful of other people who had to see this place close up. Strangely, though, no one was swimming. Kids would psyche themselves up before splashing across a half-foot of water when the tide would roll out, and they'd play in a cave near the sandy beach. But everyone else sat and relaxed near the surf. Walking around the cove, hiking my shorts higher as I stepped away from the shore, I knew I'd have to get into that water. 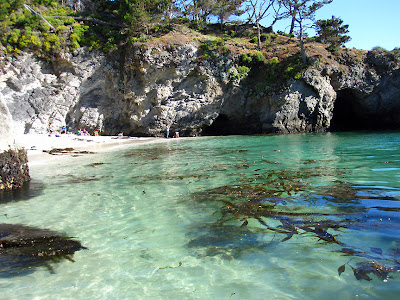 As is typical in Northern California, though, the water was ice cold. That's why no one strayed too far from the beach. Determined to explore the tunnel, to see where it led, and already soaked up to my waist, I braced myself for the next step. It'd just take one quick jump. I turned and looked at Jenny, who studied me with the serene curiosity we devoted to those silly sea lions, and then I tossed my shirt onto the beach. Now I was committed; there'd be no turning back now. Turning toward the green water, I dove in. The frigid surface slapped me wide awake, and I realized that I'd better start swimming hard to work up some heat. As astonished onlookers stared, some snapping pictures, I churned away from the beach and acclimated myself to the cold depths.

That's when I encountered a second problem that seemed more pronounced, especially when my feet could no longer feel the sand beneath me. While most of the water near the beach was pristine, wavy strands of bulbous kelp floated in the darkness of the tunnel. Remembering our trip to Key West when the tentacles of a jelly fish raked red welts across my gut, I began to fear that the kelp's ragged blades would sting my exposed skin. After one false start toward the tunnel, I even considered turning back before telling myself to buck up. This is kelp, I reminded myself, kelp! So I swam ahead, pushing through the slimy green stuff. Naturally it was harmless. Passing through the tunnel toward the next cove, I could barely hear the splashing of the folks back at the beach. I entered the sunlight on the other side and bobbed alone for a while, surveying the flower-covered walls that rose above me. Then, heading back, I saw it: a big fat starfish just for me.

Again, dinnertime came more rapidly than we expected, so Jenny and I took the South Plateau Trail back to the car and, after changing into dry clothes, drove to Carmel-by-the-Sea. Threading our modest Saturn through all those BMWs and Lexus showcases, we passed art gallery after art gallery and we stared agape at the ostentatious display of a town built upon idealized images, either of itself or the natural wonders nearby. Still we couldn't resist one last nice meal. The Village Corner Bistro fit the bill and we savored a pleasant dinner on the patio next to a fire. Dessert, a brief stroll, and a slow drive out of town concluded our anniversary trip with a reminder of the many good times we've had, and the many more that await just down the road. 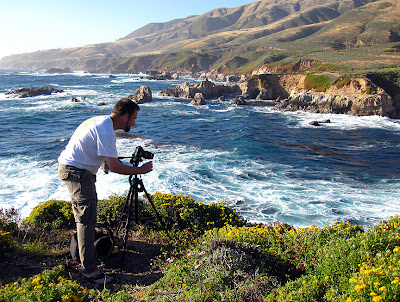 (Photographs by Andrew and Jenny Wood)
Email ThisBlogThis!Share to TwitterShare to FacebookShare to Pinterest
Posted by highway163 at 5:30 PM