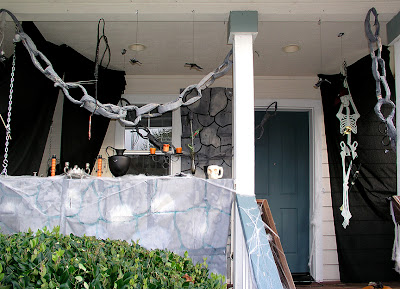 While searching through our growing collection of digital memories I came across a few pix from that first year when we transformed the porch into a creepy Halloween experience for the kids. In 2004 Jenny and Vienna took the lead on a project that would become a family tradition. They found a plastic skeleton, planted some gothic looking candle holders (with lit candles, of course) and hung chains and a dreary looking wall made from painted construction paper. After dressing up the skeleton with a bandana and sticking a fake cutlass through its guts they labeled their creation Pirate Dungeon. 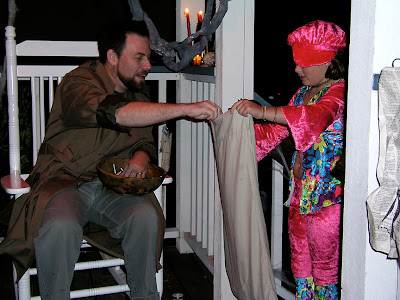 I was happy for them to run the show, leaving me to help hand out candy to the kids. It was a simple but memorable night. Oh, I sometimes moan, if only we'd stuck to that model: dig through the garage, round up whatever's lying around, and spend a couple hours throwing it together. Halloween since 2004 has become a much more complex event in the Wood family household, with video, music, costuming, and design that takes weeks to develop. Just breaking down the set of this weekend's Alien Autopsy took an hour - and we've still got to pack up all the gear (a full-sized skeleton, a gory alien corpse, a stainless steel UFO, and a hundred other tiny details) and somehow stuff it all back in the garage. Just think: all that work was inspired by Jenny and Vienna's lark of a Halloween six years ago. 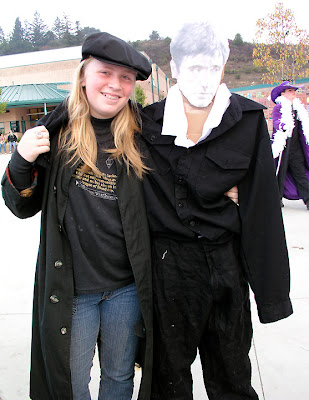 One last memory: Vienna's 2004 costume. For some reason our daughter was obsessed with Al Pacino back then - especially with his Tony Montana Scarface character. I mean, literally, this kid had a foot-tall Scarface action figure! Maybe we should have counseled against her fascination with such a blood-soaked antihero, but we knew that these things generally pass. Anyway, we could hardly be surprised when Vienna announced that she was dressing up as "Mrs. Tony Montana" for Halloween, complete with a version of her hero dressed up on skates as a prop. She looks back on that choice with horror now, but what can I say? Halloween brings out the best in our family!
Email ThisBlogThis!Share to TwitterShare to FacebookShare to Pinterest
Posted by highway163 at 3:41 PM