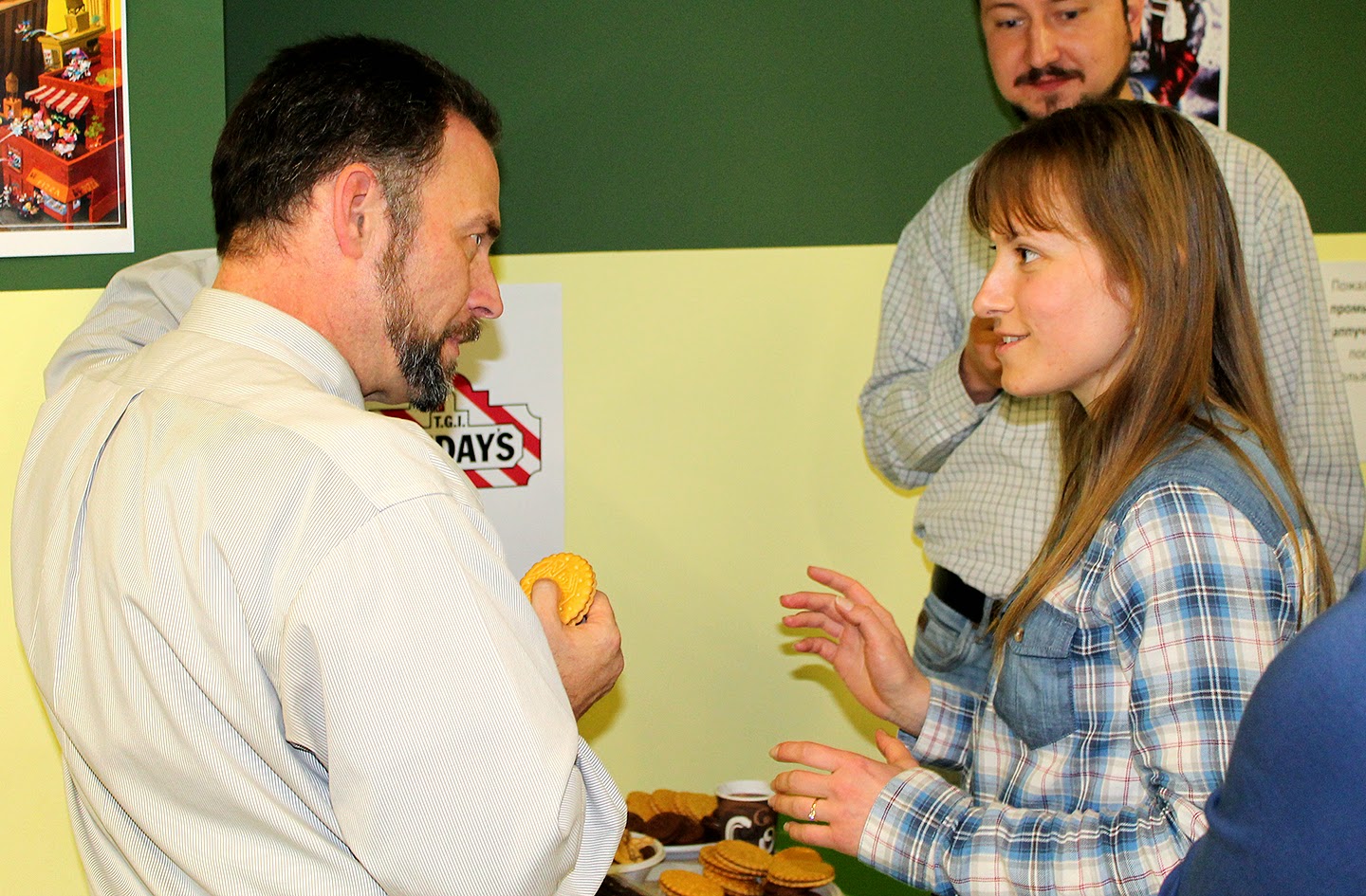 A quick exchange during a Route 66 lecture yielded a four-day road trip this week, featuring a first-time visit to Grodno, a pleasant return to Brest, and a sublime stop in the village of Ružany. It all began when an audience member at the Minsk International Book Fair last February asked an especially interesting question: "What should I pack for a road trip?" I replied, "Your sense of adventure," which seemed to strike a chord. A few days later, that participant, Irene Altukhova, emailed an invitation to present a lecture on American culture at the Belarusian IT company EPAM where she works. You might recall that Irene's the person who baked "Pigs in a Blanket" to provide a special ambiance for that talk. Turns out, she coordinates English training for their employees throughout the country, and she thought it'd be a good idea for us to take this presentation on the road. Thus we met at a bus stop a few days ago, loaded up with drinks and snacks for the road, and headed west. 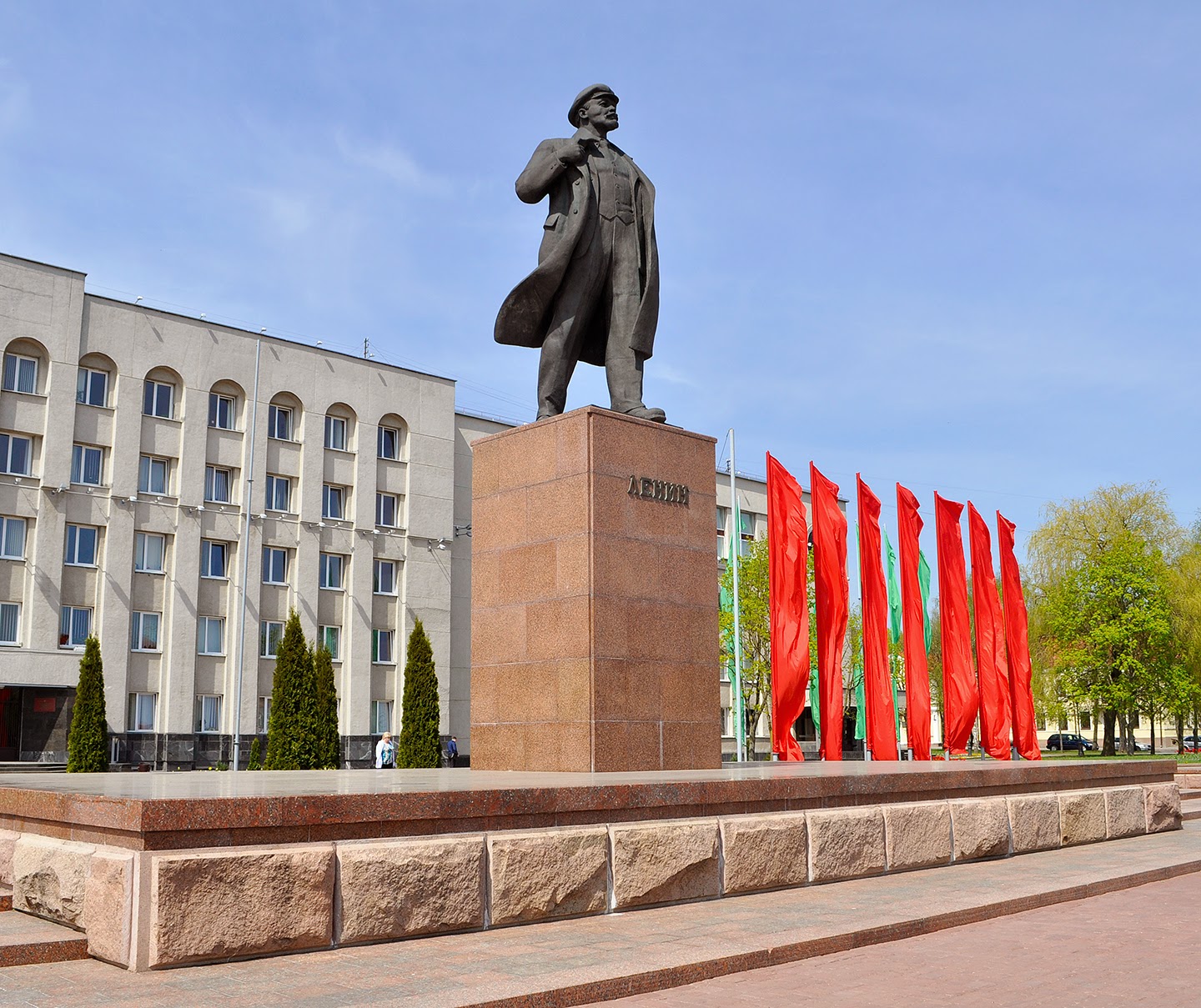 We quickly settled into a comfortable rhythm of conversation and story telling, with her driving and me using Google Maps to supply directions. She'd recommended that I pack some CDs, so I also took great pleasure introducing her to some of my favorite road trip tunes. Her colleagues at the Grodno EPAM office warned of an impending thunderstorm, which inspired plenty of gallows humor about how the lovely blue skies that spread above us were merely a prelude to a vicious downpour threatening to explode at any moment. The Weather Gods were kind, however, allowing us a few hours to tour the city on foot. As usual I made a beeline to the Lenin statue [pretty much every town, and most villages, still have some commemoration of the man in this country]. We also visited the Jesuit Catholic Church, the Pakrouskaya Orthodox Church, and strolled Zhiliber's Park and Sovetskaja pedestrian street. 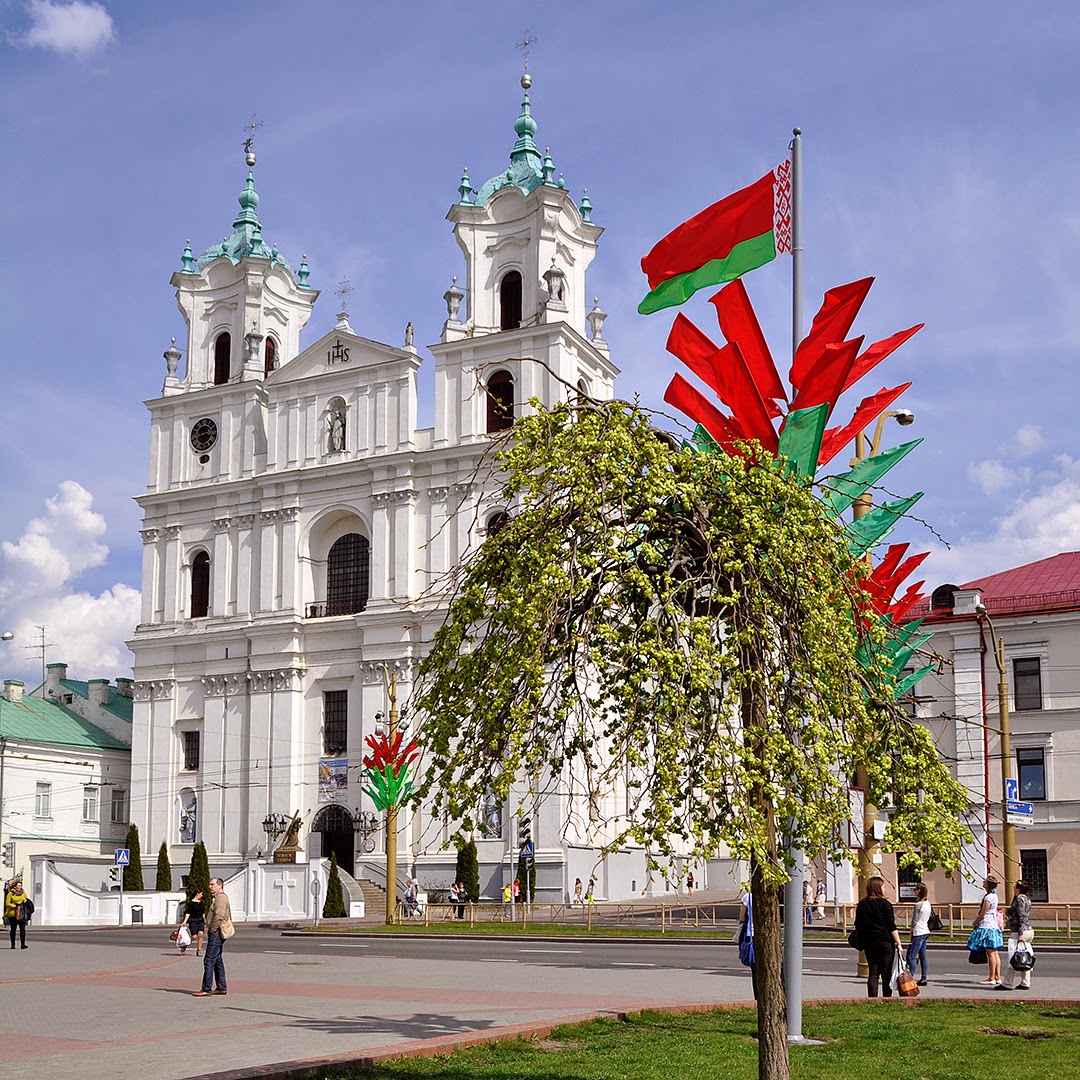 That evening we made our way to the EPAM office. All day I'd quietly fretted that I'd been having so much fun when perhaps I should be thinking more intently about the presentation. Happily, though, I've thoroughly internalized the talk after more Belarusian lectures than I can easily count by now. The venue was well organized and audience was friendly and engaged. At one point, we were comparing U.S. and Belarusian attitudes toward saunas and I was reflecting on most Americans' comparative reticence to disrobe in public places when one attendee playfully invited me to share a sauna with him the next day. "If only I could!" I replied, "But Irene's got me on such a tight schedule!" 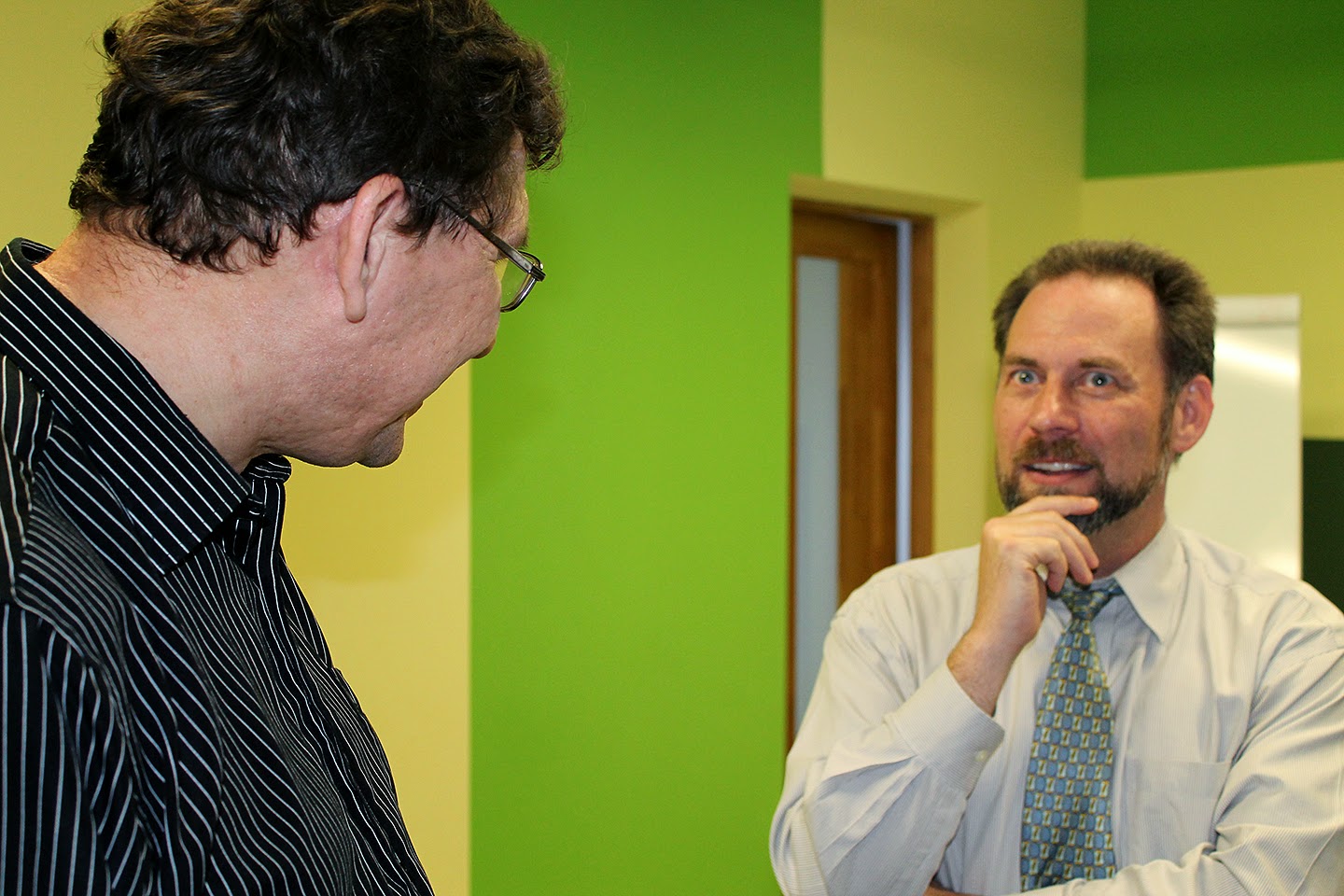 The post-lecture conversation flowed for another hour. Indeed, though I grabbed a cookie after the talk, I never had a chance to eat it; I was so engrossed in chats with participants who had stayed after work to visit with me. Best of all, two Grodno EPAM folks treated us to dinner and an evening of conversation (and lots of пиво). I particularly recall that moment when the four of us were walking the streets toward our restaurant, sharing umbrellas when a slight drizzle began to fall, thinking how wonderful it is to make new friends and feel, if only temporarily, at home here. 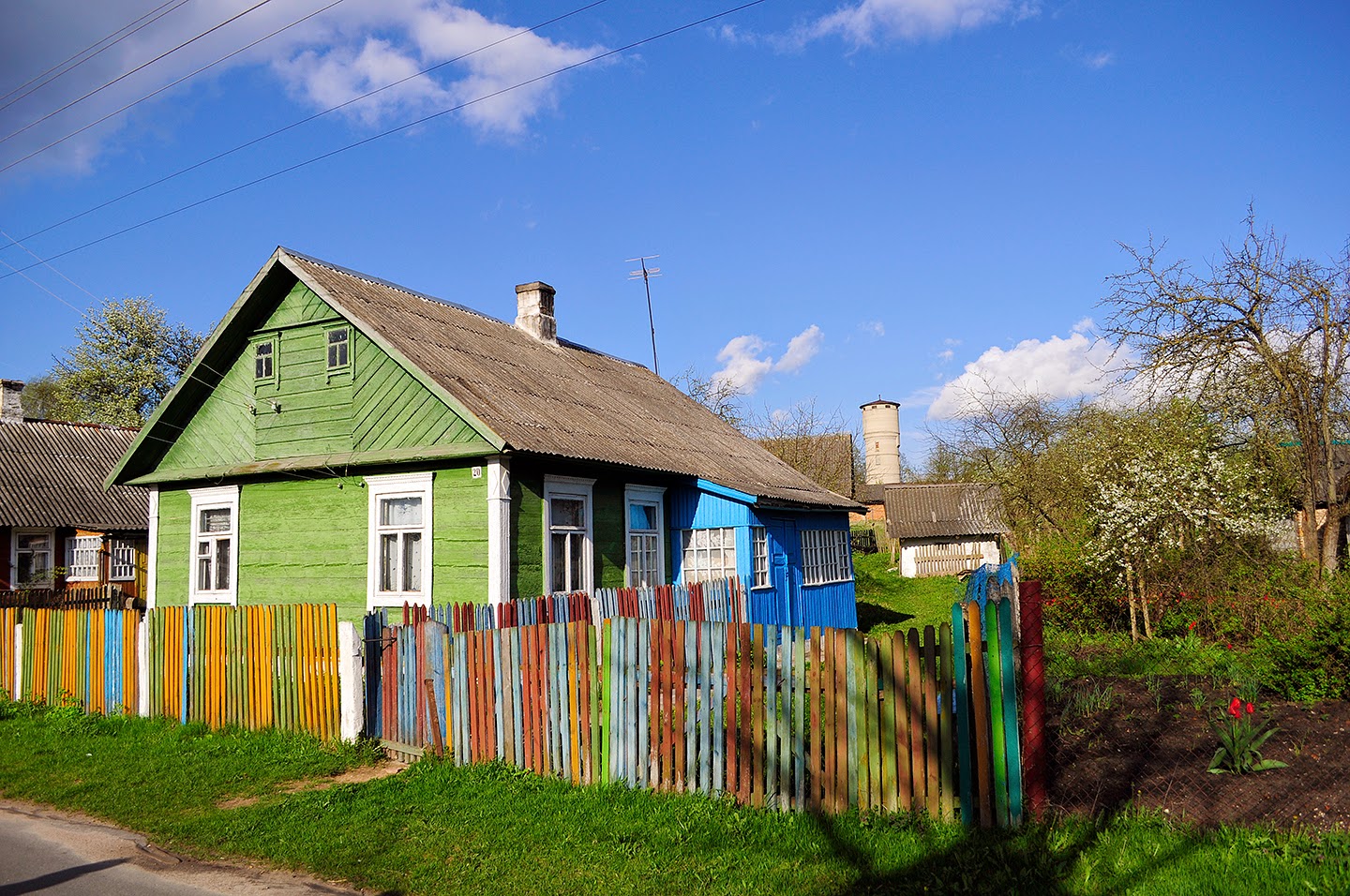 The next day was dedicated to more sightseeing and travel. We began with a hike to Grodno's old and new castles, where we took a brief museum tour. Then we departed the city - stopping for Irene to snap a picture next to a sign for her husband Dmitry's hometown - and headed southwest around Belovezhskaya Pushcha National Park. Despite warnings of miserable weather, the clouds parted and revealed a friendly afternoon. Given my growing fascination with Belarusian village homes, especially the ones festooned in combinations of yellow, green, red, blue, and sometimes purple, I was grateful for Irene's invitation that we could stop along the way for some photography.

That's how we found ourselves in Ružany, walking a road whose delightfully gaudy houses stretched toward rolling green hills. A woman came by and pointed out some tulips nearby, and then she invited us to her home where she grows her own. Irene and I shared a conspiratorial laugh, imagining our spouses back home telling the sad story, "…and they were never heard from again," but we plunged ahead anyway. Later we asked for directions to the ruins of a palace that beamed with orange light. The sight of tiny homes on distant hills through the glowing arches was nothing less than beautiful. 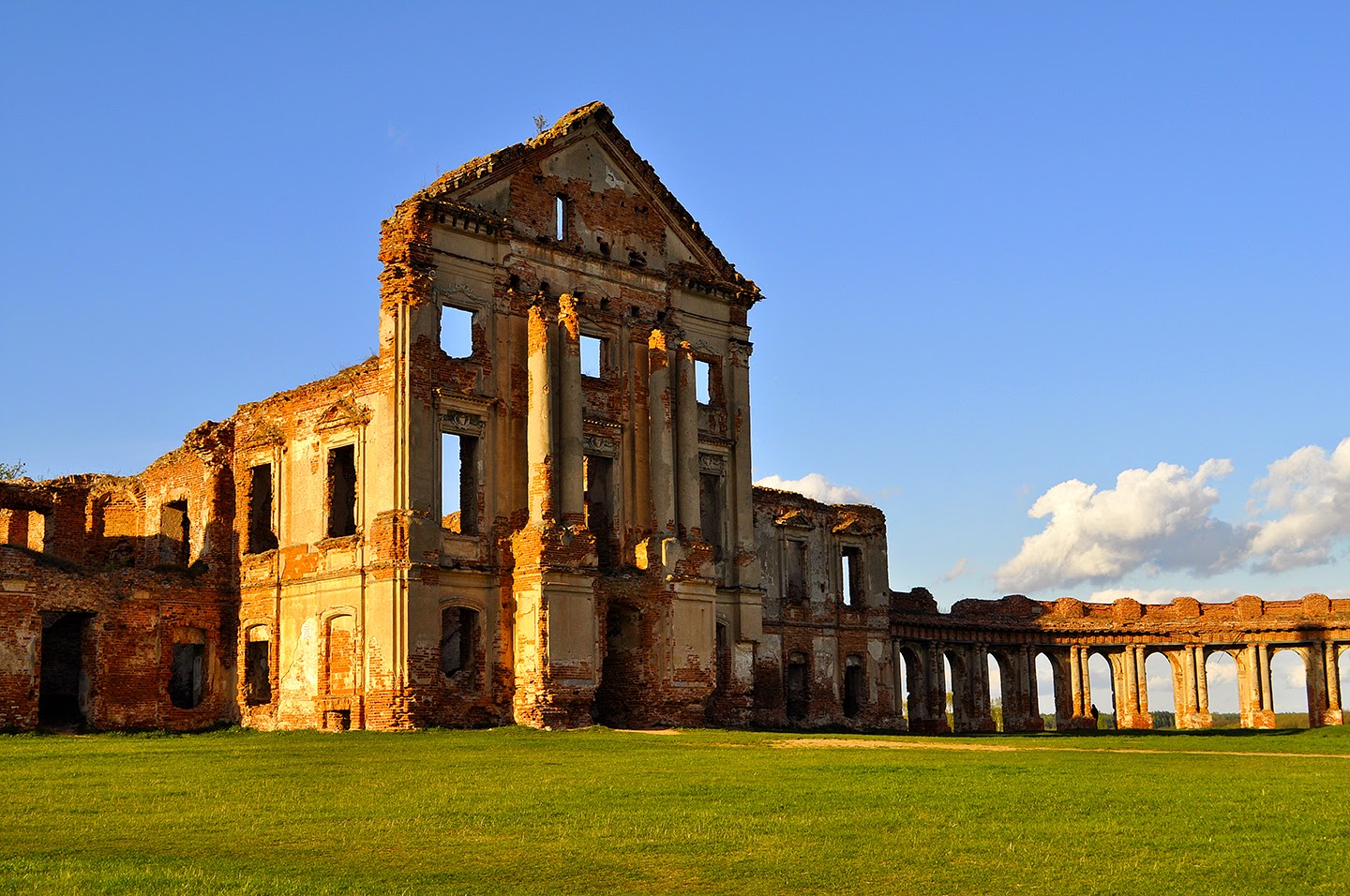 Departing Ružany, where storks build nests atop tall poles, we saw sheep and lambs standing at a bus stop, like they were queuing for the next ride. As the sun set over the bogs and swamps, I switched us to my "nighttime driving" playlist. Before too long - after some fear that we might run out of gas - we made it to Brest. After splitting up to unpack in our rooms, Irene and I grabbed a quick dinner in the hotel. She introduced me to Пельмени, a hot pot filled with mushroom sauce and doughy "ears" of succulent meat, and I found myself thinking, "Why did I wait so long to discover this dish?" We also chatted about ways to improve the presentation. Her advice, as usual, was impeccable. 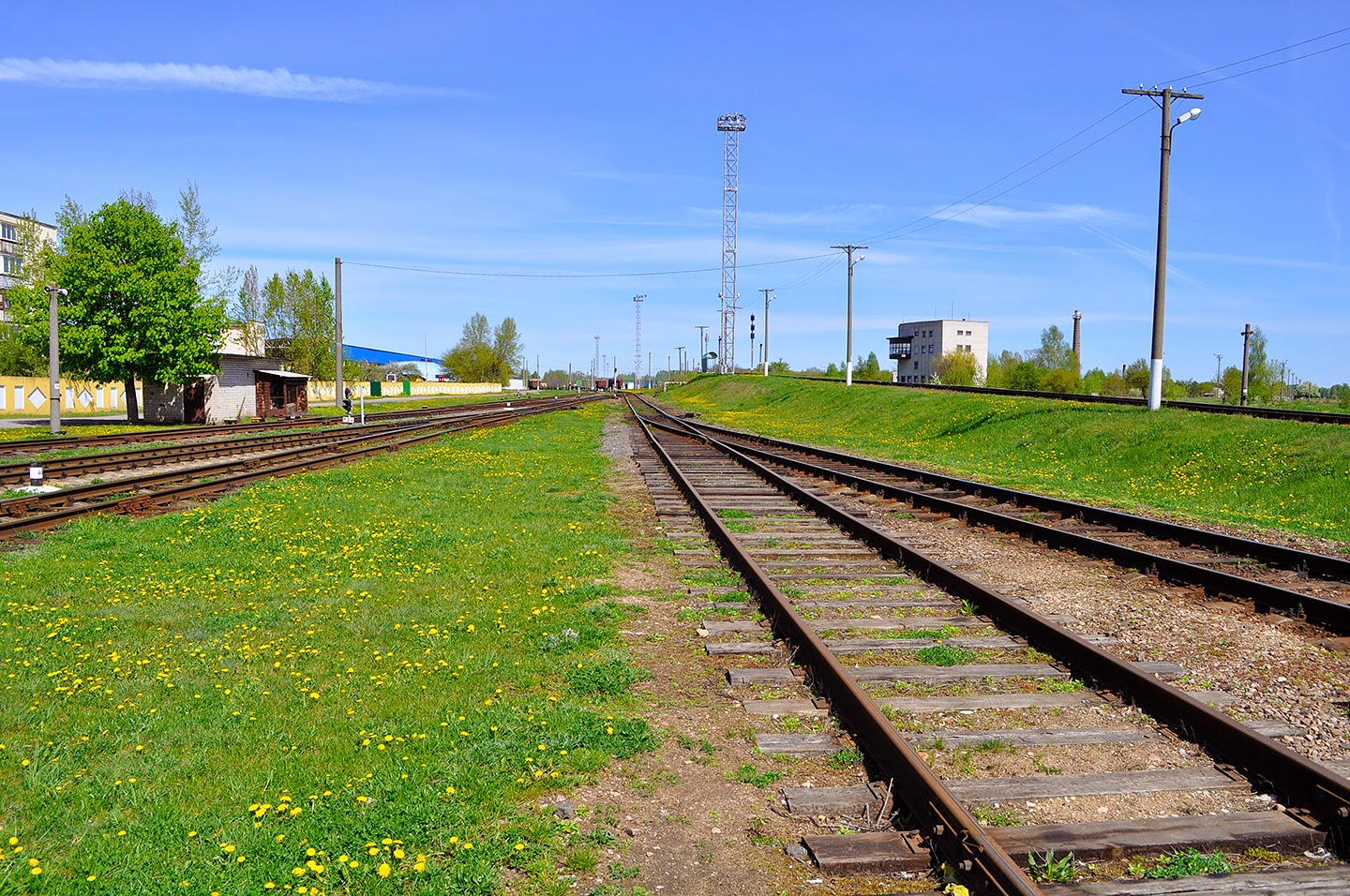 Since I'd been to Brest twice before (most recently within the past few days), I was happy to wander the streets the next day with no special aim while Irene attended to work at her office. The spring weather brought cherry blossoms that drifted through the air and blanketed the sidewalks. Still, I sometimes prefer a city's funkier environs, so I ambled along the railroad tracks for a while. Later when I stopped to grab a soda at a convenience store (where the cashier required that I pay first before she'd unlock the soda stored in a refrigerated container), I met a ruddy-faced dude speaking an impenetrable Russian. He took out a small bottle of vodka and seemed determine that I should share a snort with him. Then he followed me several blocks, inviting conversation sprinkled with liberal repetitions of the words for vodka and beer. Eventually he peeled off and I returned to my room to prepare for the evening presentation. 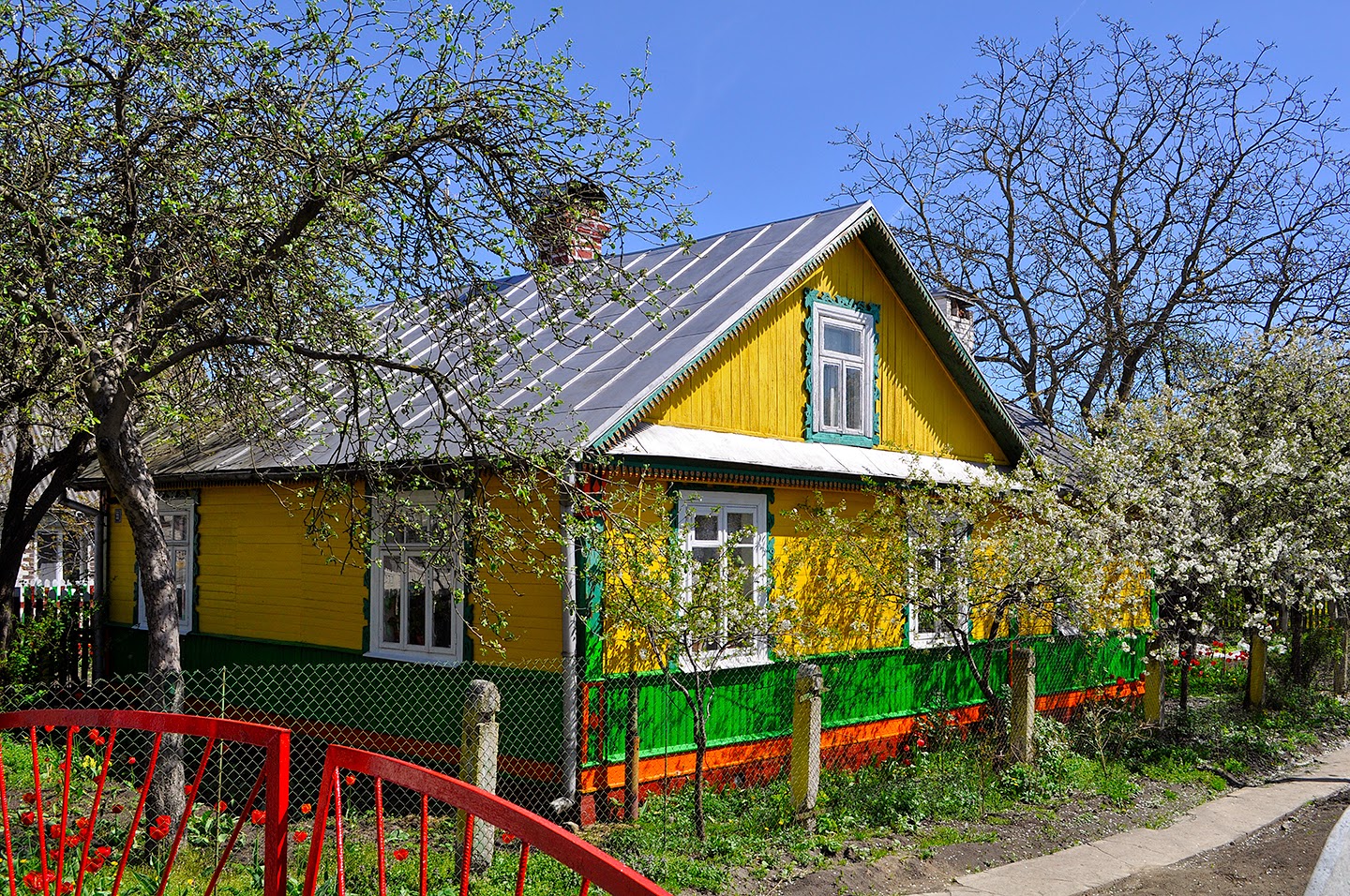 The Brest EPAM folks were welcoming and fired up to discuss American culture. And one of these folks had followed Irene's lead and prepared Pigs in a Blanket! I launched into my talk, taking a quick detour to a mini-roadside Americana lecture and singing "Get Your Kicks [on Route 66]" for the crowd, savoring the opportunity to bypass the script and respond to impromptu questions and comments that often surprised me with their passion.

Since this might be the last time I present the "American Dreaming" lecture in Belarus (for a while, at least), I was most grateful to receive mementos of my visit, including a souvenir spoon and a t-shirt signifying my status as an official EPAM trainer. Later that evening Irene and I shared a celebratory meal at Times Cafe and agreed that our trip had been a success. 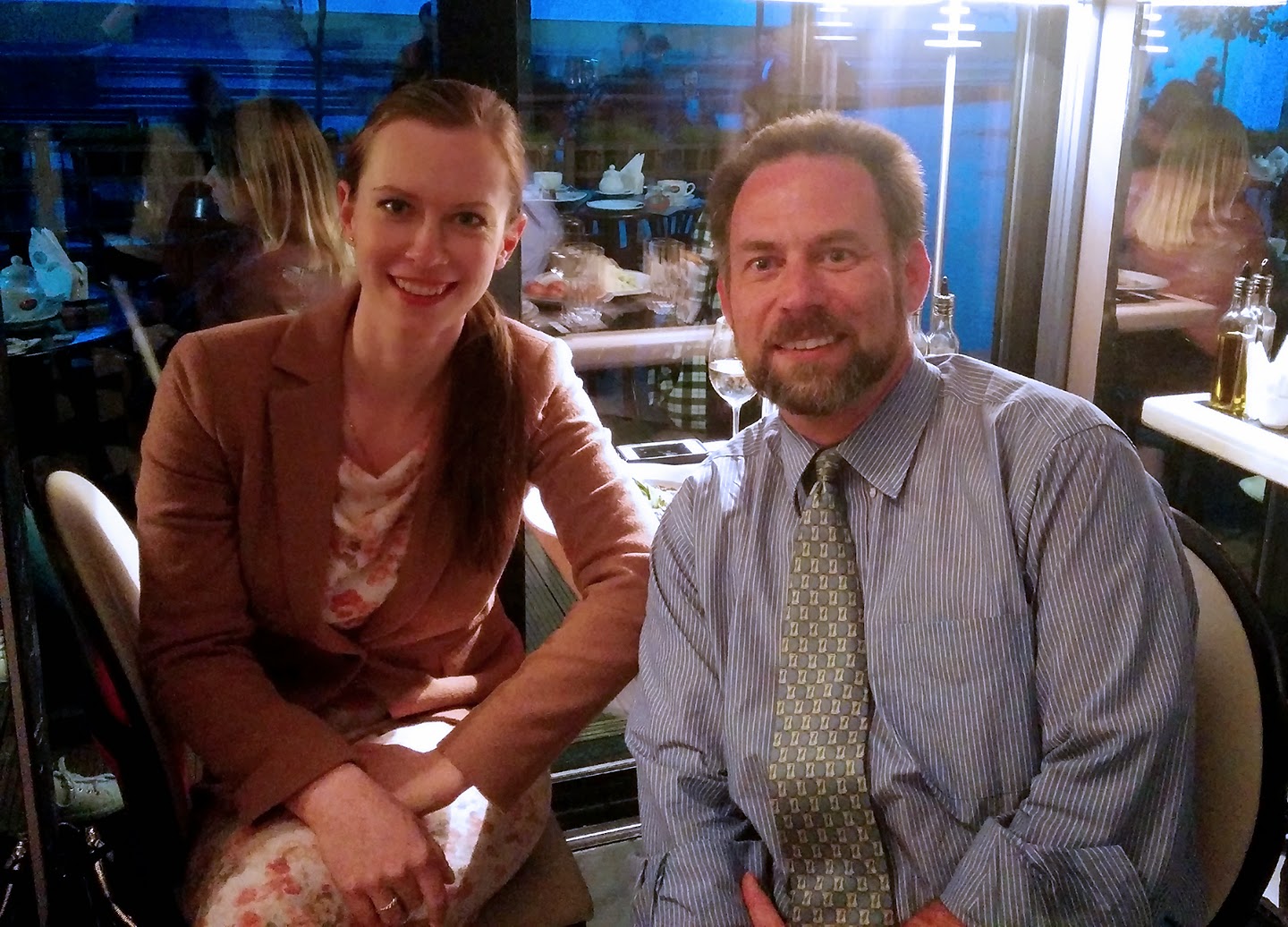 Our final day afforded me a chance to practice my old school mapping skills, when I realized that I'd left my phone's charging cable at the EPAM office. Even without Google Maps, though, we managed to navigate the city and find the M1 highway that leads to Minsk. On the almost four-hour drive back, we shared stories about our spouses, discussed some of the finer nuances of our cultural differences, and anticipated ways for Irene to visit the United States. As usual, my American optimism led me to affirm that, "Of course, you'll come!," even though costs and visa hassles make traveling from Belarus to the U.S. a complicated process. Still, I hope that Irene and Dmitry will make their way to California one day. They'll certainly find friends in Scotts Valley! 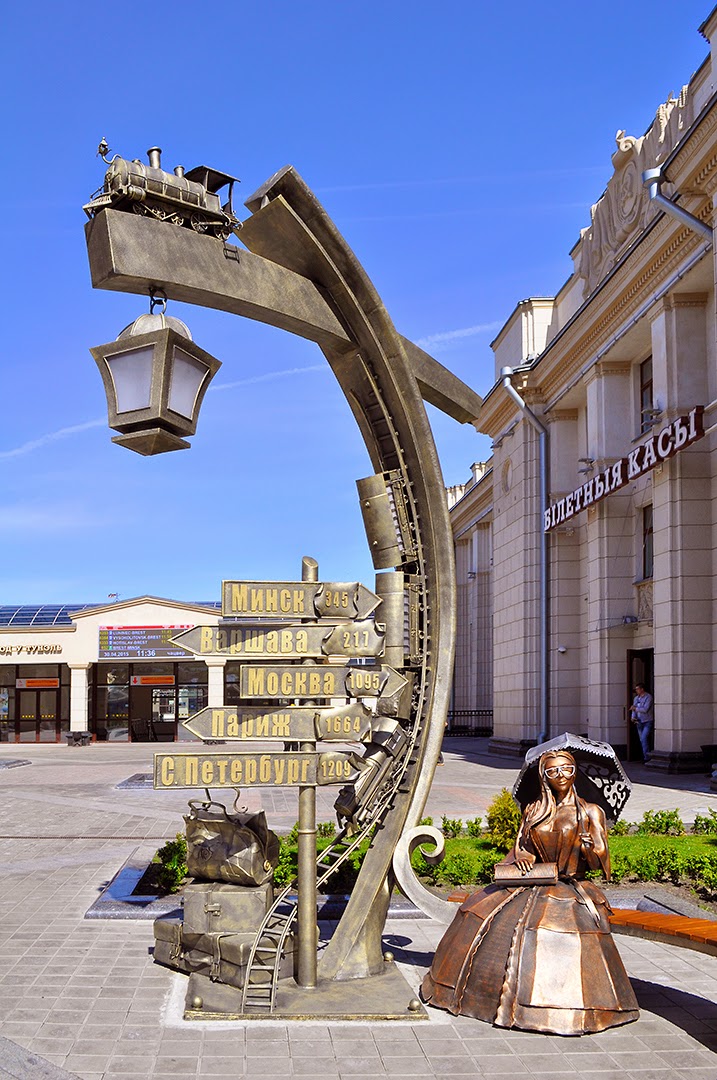 Email ThisBlogThis!Share to TwitterShare to FacebookShare to Pinterest
Posted by highway163 at 9:04 AM

Wow, your road trip sounds perfect! Complete with tunes, strangers and great stories. You'll have so many terrific memories.

Love the photos! The colors are terrific. I am impressed at the road trip opportunities you've had in Belarus!

I have loved this place so much; I can't believe it's almost time to go home! :-(