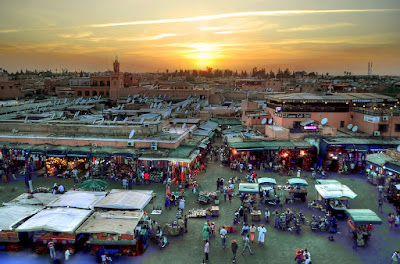 Jenny and I are back in the U.S. after meeting in Finland, taking a quick tour of St. Petersburg, and spending a week in Morocco. Yeah, it was a bit disjointed - and for now I'll focus on the later part of the trip. We flew into Marrakesh in late afternoon, checked into our riad (a traditional home notable for its relatively unadorned exterior that hides an indoor courtyard), exchanged some currency, and enjoyed a sunset stroll through Jemaa el-Fna Square. This gave us a chance to practice our kindest but most determined la shukran to ward off the dudes trying to foist monkeys on our shoulders or pitch some other unwanted product or "service." That evening we savored a rooftop meal overlooking the square and then found our way back home through the narrow alleys of the medina, sounding off landmarks and looking sharp for the rush of oncoming motorbikes. 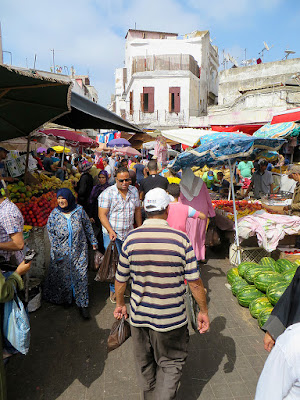 The next day saw us once again getting pleasurably lost in the souk's seemingly endless labyrinth. Highlights included the siren song of the snake charmer, buying glass after glass of fresh squeezed orange juice, saving extra table scraps to feed the stray kitties, practicing the art of "walking away" as part of the haggling ritual, and smiling every time some dude called me "Ali Baba." Following an afternoon nap we returned to the square, figuring we'd take a "direct route" through the souk rather than follow our typical route around the main road. Yeah, great plan. So we wandered narrow passages that seem to bend into some sort of trans-dimensional warp. "Guides" appeared in search of dirham, but we made our way to the square - just in time to celebrate the sunset with some mint tea. Jenny insisted on street food, so we dined on Moroccan salad, kefta, chicken skewers, and orange juice. Back at the hotel, we climbed up to the roof to check out the stars. First song on our playlist: Midnight in the Oasis. 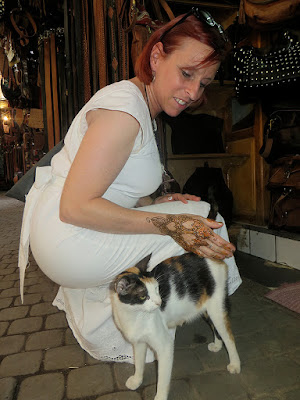 Our last day in Marrakesh meant sleeping in, followed by packing. For Jenny, that also meant a visit to Henna Cafe where she partook in the artistic ritual (and I enjoyed some mint tea). We then ambled back to Jemaa el-Fna Square, climbing the steps to take our seats on a rooftop restaurant that sprays cool blasts of mist to beat the heat. Afterward we plunged into the souk in search of the Ben Youssef Madrasa and, later, an art museum. Thus an endless array of invitations and announcements ("Excuse me." "Are you lost?" "Hey Ali Baba, good price for you!" "What are you looking for?" "This way is closed." "Bonjour." "Hola." "Hello!"). We laughed at our foolish hope ("OK, we head straight that way") but somehow made our way back in time to collect our bags, grab a cab to the station, and board the night train to Tangier. 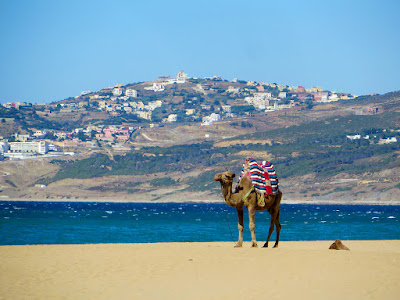 We arrived the next morning, found our lodging, and began the explore the medina, which features lots of hills, narrow passages, and stairways that seemingly lead nowhere. We strolled to the Casbah, trying to politely dissuade would-be guides and wondering whether we could make our way back to the waypoint without a map. Happily, it's true: Not all who wander are lost. Thereafter we shared breakfast on the roof of our riad: Moroccan coffee, mint tea, fresh squeezed orange juice, crepes, corn meal bread, and melon. Then we washed a few days' worth of sweaty, stinky clothes, and celebrated a slow, lazy day. Afternoon concluded atop the roof, awaiting the sunset call to prayer. It's such a lovely sound, the rising call to reverence pouring forth from minarets and speakers around the hilltop. 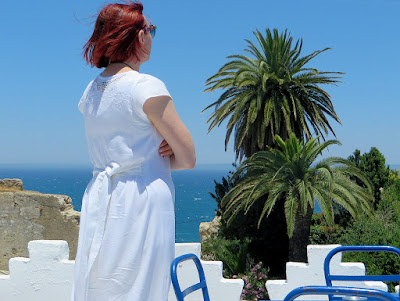 The next day in Tangier we meandered to the American Legation, which I first toured back in '88 or so, only to find it is closed on Saturday. No worries, though. We simply had more time to get lost in the medina. There were few touts today, and those up this early weren't especially persistent. Eventually we climbed to the Casbah and learned a bit about the region's placement as crossroads for Berber, Roman, Arab, Portuguese, Spanish, and French travelers. For lunch we sat atop Le Salon Bleu, where watermelon juice is a speciality. Early afternoon brought us back to the alleyways to pet stray cats and photograph arched doorways. At one point we were sprinkled with water that seemed to drop from the blue skies. It took us a moment to realize we were standing under a carpet hung to dry in the sun. 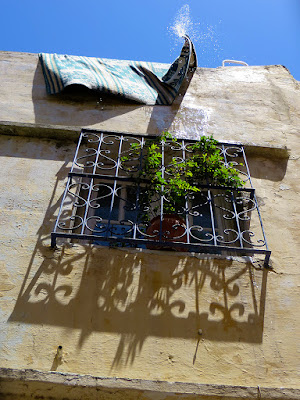 We wrapped up our Morocco visit in Casablanca, a five-hour train ride from Tangier. By this point we'd gotten fairly used to the medina routine, but our brief wandering revealed a remarkable assemblage of street art. We also stopped at a stand to fill up a liter bottle with fresh squeezed orange juice. Given the Ramadan period, we tried to never eat or drink in (too) public a place - even sneaking into quiet alleys to quench our thirsts - but our foreignness, our obviously touristic demeanors, earned plenty of attention wherever we went. As the sun began to set we walked to the grand (Hassan II) mosque to enjoy the towering architecture and cool sea breezes, and later to our inevitable visit to Rick's. Of course we knew that the "actual" Rick's Cafe Americain was filmed on a Hollywood soundstage. Still, we enjoyed the chance to dress up, sip fancy drinks, and reflect on the adventures we've shared. 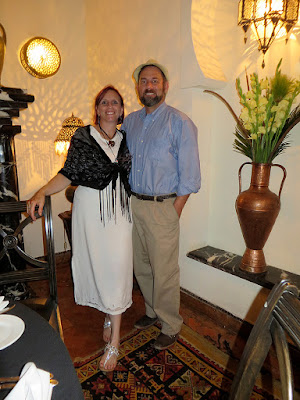 Email ThisBlogThis!Share to TwitterShare to FacebookShare to Pinterest
Posted by highway163 at 2:36 PM